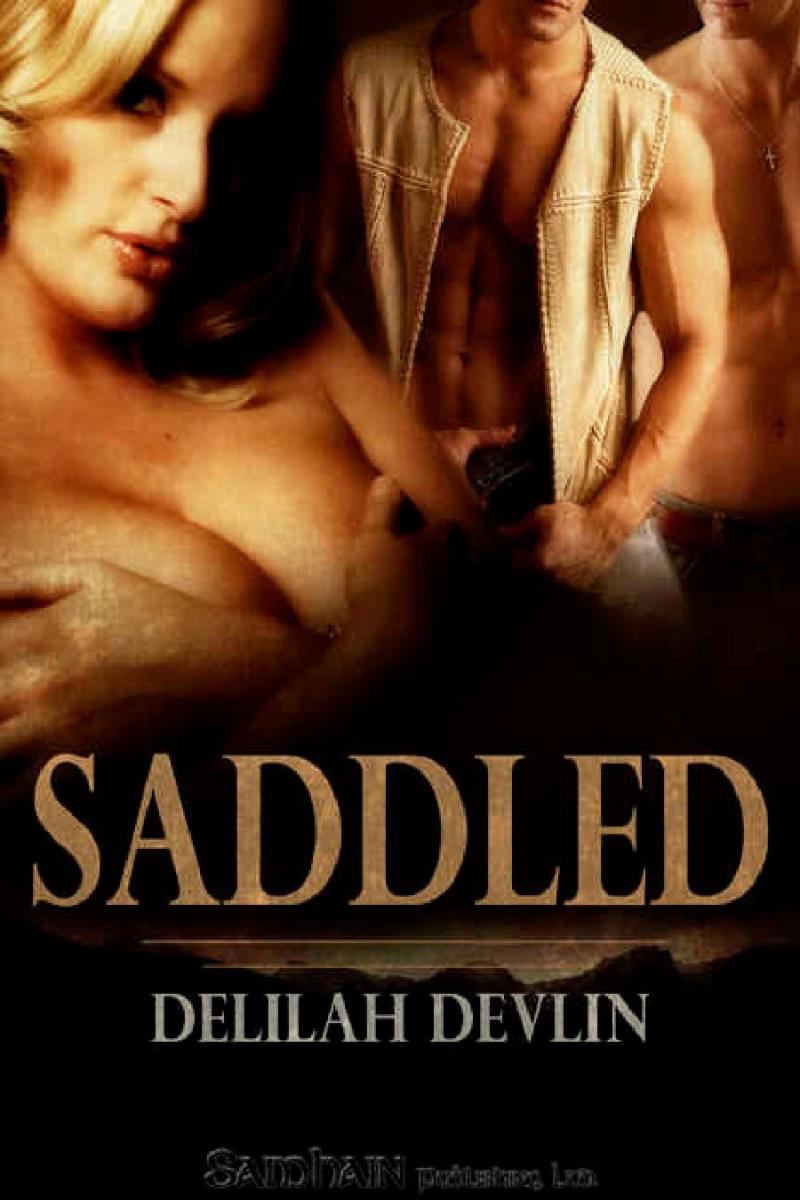 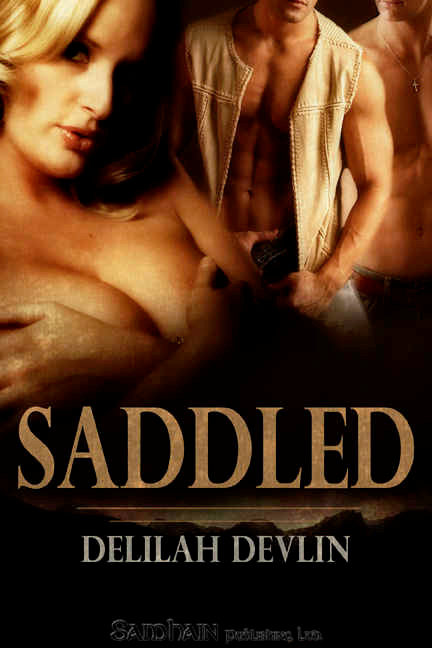 Look for these titles by Delilah Devlin

They're craving something sweet. She likes it spicy.

They cannot be sold, shared or given away as it is an infringement on the copyright of this work. This book is a work of fiction. The names, characters, places, and incidents are products of the writer's imagination or have been used fictitiously and are not to be construed as real. Any resemblance to persons, living or dead, actual events, locale or organizations is entirely coincidental. Samhain Publishing, Ltd.

For every woman who ever lusted for a cowboy ... or two.

Bobby Blackhawk shook his head as the taillights of the little Beemer just ahead flashed red again through the falling snow. Sure enough, as soon as the driver crunched the brakes, the tail end of the car began to slide on the snowcovered ice.

"She's gonna go right into the river if she keeps that up," Cale Yancey muttered beside him.

They'd been following the car for the last ten miles, inching down the lonely highway. They'd already figured out the car wasn't using snow chains, and the driver was too stupid to know she was skirting on the edge of real trouble.

"Why are you so sure it's a woman?" Bobby asked.

"Can't drive worth a damn."

"Love for you to tell Lacey J. that."

Now, that was an understatement that had them both sharing lopsided grins, considering how well Lacey had proven that point the previous weekend.

"Sure could use me a little of her lovin'," Cale said, sounding wistful.

next two months, impatient for the thaw so they could get back down the mountain.

It was a good thing they'd discovered long ago that they were compatible in ways that would make most men blanch, otherwise the wait to make it back into town would have been unbearable. Neither was squeamish about helping the other out; however, both preferred emptying their passion inside the wet, snug passage of a woman. If the woman happened to be obliging, like Lacey often was, they didn't mind sharing. Both vehicles climbed the last long hill right before the men's turnoff and another half-mile beyond to the highway, tire treads biting into fresh snow.

"Think we better follow to make sure?" The car ahead made it to the top of the rise, and then the brake lights flashed again.

Cale cursed. "Wish she'd quit doing that." Rental company plates on the back of the car explained a lot about the aptitude of the driver. "Doesn't know she should just gear down and take it slow."

They reached the top, and Bobby geared down. Sure enough, the driver up ahead hit the brakes again, and the rear of the car slid sideways. As though watching a movie in slow motion, both men held their breaths, hoping the woman would gain traction at the last moment, but one rear tire slid off the edge of the road and then the right front followed. With tires spinning and brake lights flaring bright, the car slipped slowly down the hill and into the creek. 9

"Not good," Cale said tightly as Bobby pulled into the snow bank at the side of the road and left his emergency lights flashing. Just a precaution since there wasn't much of a chance of anyone coming up on their rear end since the road crew had been taking the barriers off the truck when they'd passed.

Bobby slammed the car into park and climbed out, following Cale as he slid on his ass down the hill. They paused at the water's edge, staring at the vehicle, both knowing one of them was going to have to get wet.

Water was midway up the car door, and the driver had rolled down her window. Blonde hair peeked beneath a black knit hat. Terror-stricken blue eyes peered at them through the falling snow.

"Ma'am, can you get yourself out?" Cale shouted.

"I think so," she said, her voice tight and quavering.

"If you can crawl out your window, we can help you the rest of the way."

"Gotta move now, sweetheart," Cale said, his tone gentling the same way it did when he worked with a fractious horse.

"You wait another second, two of us are gonna be in trouble."

"My purse. I can't find it." She turned in her seat, reaching into the back of the car.

The car bobbed on the water, and for a moment, Bobby thought it might break free and start floating. "Lady, leave it," he shouted. "You don't have time to look."

She bit her lip, and then her face screwed up as though she was going to start crying.

"Fuck sake," Bobby muttered, stepping past Cale and stripping off his coat. "I'll get her out. It's gonna be up to you to get us both up that goddamn hill." And then he was plunging into water so cold his legs went instantly numb. He reached her door, stretched an arm inside her window and unbuckled her belt. Her skin was too pale, her body shaking violently. She was entering hypothermia, and he was fast on her heels.

"Sweetheart, you have to help me a little bit.
Please.
" Then he reached inside and pulled her, dragging her out, using brute force and knowing he was banging her around the window frame, but he had to be quick because the cold was sapping his strength.

As soon as her legs cleared the window and fell back into the water, she moaned, but he turned with her, slung an arm around her waist and half-dragged her back to the edge of the bank.

Cale reached for them both, but Bobby shoved her at him.

"Get her to the car first. I'll be right behind you." Cale gave him a sharp glance but didn't argue. There wasn't time. He bent and heaved the woman over his shoulder and then clumsily made his way up the hill and out of sight.

Bobby took only two steps out of the water before his legs gave out, and he fell to the ground on his knees. Shivering with cold, he stuck his hands under his arms and huddled 11

inside the coat he'd left behind, knowing he'd have to be hauled up the hill too.

It seemed only a moment later and Cale was kneeling beside him. "Your turn, buddy."

Bobby tried to give him a smile, but he was just too damn tired and his face felt frozen.

"Can't carry you. Dammit, you have to help."

"Gimme a minute. Too cold," Bobby managed to mumble, but Cale's hands were already under his arms and tugging him hard. "Just a minute. I'll ... walk."

"You're in no condition, but this is gonna be slow. I'm not leaving you here."

"'S good," Bobby said, trying to keep his mind clear, but he was tired. So goddamn tired, and he couldn't feel his arms and legs. One last moment of clarity and it struck him that he might die. "Leave me."

"No fucking way." The tone of his best friend's voice was rough, deeper than usual.

If he could have, Bobby would have smiled. The only time Cale got this shook up was when his cock was deep, his balls tightening and on the verge.

By the time Cale fell through the front door of the cabin with his final burden, he was shivering hard. 12

Bobby hadn't spoken a word in too long. The woman was still unconscious, lying in the same spot he'd dropped her before he'd headed back to the truck for his friend. Bed, he had to get them both into bed. He let Bobby slide to the floor and walked on wooden feet to his room, tore back the quilt, turned on the electric blanket and then began to strip as he headed back for them both.

The woman was in the worst shape, but he carried her to the bedroom, sat her on the edge of the bed and stripped her as fast as his frozen fingers could manage before drying her with his clothes, then scooting her to the far side of the mattress and covering her up.

Then it was back for Bobby, whom he had to drag by his arms. Once his friend was stripped and lying on the bed, Cale stoked the wood-burning furnace and crawled up between them, pulled the covers over them all and tried to still the shivers that racked his own body sandwiched between two frighteningly cold bodies.

He pulled them both close on either side of him and wondered as he drifted off to sleep if any of them would make it through the night.

Despite their dire circumstance, Cale couldn't help thinking that the girl they'd rescued was just the type the two of them would have rushed toward in a bar, crowding her between them as they both jockeyed for attention.

More often than not, Bobby would win the competition. With his glib tongue and darkly handsome face, he'd lead the woman away, grinning at him over his shoulder. 13

Cale might have been left a time or two with a hard-on he couldn't ease, but he hadn't really minded. Not much, anyway. He knew his limitations when it came to attracting a woman like this. He'd noted the lush pink and cream curves he'd uncovered when he'd stripped the woman raw. With pale, shimmering hair and a face so sweet and perfectly formed, he knew he'd have been left tongue-tied and staring. That something as classy as this woman was lying right beside him had him thinking that maybe this wasn't such a bad way to go.

Katherine Duvall awoke as sensation flooded her feet and hands—sharp prickling pinches that made her moan.

"Yeah, it's gonna hurt. But it's a good sign sweetheart," a man whispered against her hair. "And there's no frostbite. I checked."

He'd checked? One fact penetrated her pain-filled fog. He'd done a lot more than checked. She was naked. And his barenaked body was pressed up against her back, a penis nudging her bottom.

The Color of Lightning by Paulette Jiles
The Glasgow Coma Scale by Neil Stewart
Shameless Desire (The Outlawed Realm) by Tina Donahue
I Want to Show You More (9780802193742) by Quatro, Jamie
Bobby Does Dallas: Hill Country Heart by Sable Hunter
Tombstone by Candace Smith
The Trouble with Honor by Julia London
Kentucky Hauntings by Roberta Simpson Brown
Divided Kingdom by Rupert Thomson
A Love of Her Own by Maggie Brendan