Read Saints and Sinners: A History of the Popes; Fourth Edition Online

Saints and Sinners: A History of the Popes; Fourth Edition 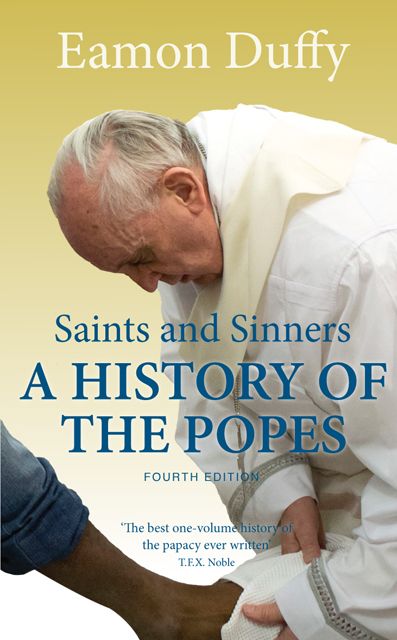 Published in association with S4C (Wales)

First published as a Yale Nota Bene Book in 2002

All rights reserved. This book may not be reproduced in whole or in part, in any form (beyond that copying permitted by Sections 107 and 108 of the U. S. Copyright Law and except by reviewers for the public press) without written permission from the publishers.

For information about this and other Yale University Press publications, please contact

I From Jerusalem to Rome

II The Bishops of Rome

III The Age of Constantine

IV The Birth of Papal Rome

I Under Gothic Kings

II The Age of Gregory the Great

III The Byzantine Captivity of the Papacy

IV Empires of the West

I The Era of Papal Reform

III The Pinnacle of Papal Power

I The Renaissance Popes

II The Crisis of Christendom

IV The Popes in an Age of Absolutism

I The Church and the Revolution

II From Recovery to Reaction

IV Ultramontanism with a Liberal Face: The Reign of Leo XIII

I The Age of Intransigence

II The Attack on Modernism

III The Age of the Dictators

IV The Age of Vatican II

VIII A Pope for the Poor

Appendix C: How a New Pope Is Made

I owe debts of gratitude to many people: to Harri Pritchard Jones, ‘onlie begetter’, and to his wife Lenna, for their friendship and truly Celtic hospitality. To Opus Television and its staff, in particular to Mervyn Williams, for the invitation to write this book, to Heyden Denman, cameraman, and to Amanda Rees, who directed the television series to which this book is the companion volume. To John Gillanders of Derwen,for endless patience and technical wizzardry. To Yale University Press and especially to Peter James, the copy-editor, to Sheila Lee, who researched the pictures, to Sally Salvesen, who designed the book and nursed it, (and me), through its final stages, and to John Nicoll, prince of publishers. Once again, Ruth Daniel read the proofs out of the goodness of her heart.

PREFACE TO THE SECOND EDITION

For this new edition of
Saints and Sinners
, I have taken the opportunity to correct a (thankfully small) number of errors, to expand and revise parts of all but the first two chapters, and to update the Bibliographical Essay. The account of the papacy of John Paul II has been extensively rewritten and augmented, and vigilant readers will detect the modification of some earlier judgements. I have also added a brief appendix explaining the procedures for the election of a new Pope set in place by Pope John Paul II in 1996. The process of revision has greatly benefited from the insights and criticisms of the reviewers of the first edition: I would like to express my particular thanks to Patrick Collinson, T.F.X. Noble and Simon Ditchfield. The illustrations to the first edition elicited much favourable comment, and though it is flattering to the author of a lavishly illustrated book when his publishers reckon his text worth reproducing in its own right, there is inevitably some loss. This edition is less sumptuous than the first, but I hope that the large number of pictures and captions we have retained will continue to extend and deepen the narrative in the text, rather than simply decorate it. I am greatly indebted to Sally Salvesen and to Ruth Applin who designed the new edition. Finally, I renew the heartfelt dedication of this book to my wife Jenny.

Nearly 900 million human beings, the largest single collective of people the world has ever known, look to the Pope as their spiritual leader. His office symbolises the rule of God himself over their hearts and minds and consciences. The words of the popes weigh in the halls of power, and in the bedrooms of the faithful. And the papacy is the oldest, as well as arguably the most influential, of all human institutions. The Roman empire was new-born when the first popes ascended the throne of St Peter almost two thousand years ago. When Karol Wojtyla became the 261st Pope in 1978, the dynasty he represented had outlived not merely the Roman and Byzantine empires, but those of Carolingian Gaul, of medieval Germany, of Spain, of Britain, and the Third Reich of Hider. Wojtyla himself was to play a not inconsiderable role in the collapse of the latest of these empires, the Soviet Union.

In the flux of history, the papacy has been, not a mere spectator, but a major player. As the Roman empire collapsed, and the barbarian nations arose to fill the vacuum, the popes, in default of any other agency, set themselves to shape the destiny of the West, acting as midwives to the emergence of Europe, creating emperors, deposing monarchs for rebellion against the Church. Popes have divided the known and yet to be discovered world between colonial powers for the sake of peace, or have plunged nations and continents into war, hurling the Christian West against the Muslim East in the Crusades.

The history of the papacy is therefore the history of one of the most momentous and extraordinary institutions in the history of the world. It has touched human society and culture at every
point. From contemporary concern with issues of life and death, the morality of abortion or the death-penalty, of capitalism or of nuclear war, to the history of Western art and the major commissions of Michelangelo and Raphael, Bramante and Bernini, the papacy has been and remains still at the heart of many of the most urgent, the most profound and the most exuberant of human concerns.

This book, which is linked to a series of six television programmes, attempts to provide an overview of the whole history of the papacy from the Aposde Peter to Pope John Paul II. It traces the process by which Peter, the humble fisherman of Galilee, became the figurehead and foundation stone of a dynasty which has been able to challenge the most powerful secular rulers, and which commands the religious allegiance of more than a fifth of the worlds population. The book is not a work of theology, though no history of the papacy can or should altogether avoid theology. I have tried to include enough theological explanation to enable the non-specialist reader to understand the milestones in the emergence of the papacy as a religious and political institution, but I have not thought it my business to justify or defend that evolution. For Roman Catholics, of course (of whom I am one), the story of the popes is a crucial dimension of the story of the providential care of God for humankind in history, the necessary and (on the whole) proper development of powers and responsibilities implicit in the nature of the Church itself. But by no means all Christians accept such a claim, and for some the papacy, at least in its modern form, is a disastrous cul-de-sac, and a prime cause of Christian disunity. For non-Christians the story of the popes is simply one more of the myriad stories of humanity, another of the multiple forms in which human hope and human ambition have expressed themselves. Whatever the reader’s convictions, however, I hope that the narrative offered here provides a framework for understanding one of the world’s longest-enduring and most influential institutions.

This is
a
history of the popes: it cannot claim to be
the
history of the popes. No one-volume survey of an institution so ancient and so embedded in human history and culture can be anything
more than a sketch, just as no historian can claim equal competence and grip across a 2,000-year sketch. There is no single storyline, for history does not evolve in lines, and the papacy has been at the centre of too many different human stories and enterprises for it to have a single story of its own. Themes do of course recur. In writing the book I have been struck by the extent to which the mere existence of the papacy, and even its most self-aggrandising claims, have again and again helped ensure that the local churches of Christendom retained something of a universal Christian vision, that they did not entirely collapse back into the narrowness of religious nationalism, or become entirely subordinated to the will of powerful secular rulers. From Barbarian Italy or Carolingian Europe, to the Age of Enlightenment, or the Age of the Dictators, the papacy has helped keep alive a vision of human value which transcended the atavisms of history and the rule of mere force, and has borne witness to the objectivity of truths beyond the shifts of intellectual fashion. For all its sins, and despite its recurring commitment to the repression of ‘error’, the papacy does seem to me to have been on balance a force for human freedom, and largeness of spirit.

I have tried to ensure that the narrative offered here is reasonably comprehensive, and that it accurately reflects the current state of knowledge of the issues and events it covers. Inevitably, however, the attempt to compress so much into so small a space has involved drastic and painful decisions about what to omit, as well as what to include: I do not expect my judgement about what is central and what marginal to be agreed with by everyone.

Nor is every stretch of papal history equally easy going. Some readers may be daunted by the theological complexities and the historical unfamiliarity of some of the material covered in Chapter Two, which deals with the popes of the so-called ‘Dark Ages’. I have dealt with them in some detail, however, because the fundamental orientation of the papacy towards the West and away from the East was decided in those centuries. Similarly, in the section on the Renaissance popes, readers may be surprised to find far more about the relatively obscure Nicholas V than about the far more notorious Alexander VI, the ‘Borgia Pope’. This is not
because Nicholas was respectable and pious, and Alexander scandalous and debauched (though both these things are true), but because in my view the career of Nicholas V tells us far more about the nature and objectives of the Renaissance papacy than the more colourful and better-known escapades of Alexander. Readers must judge for themselves. And finally, it is of course too soon to form a mature assessment of the nature or importance of the pontificate of John Paul II, or indeed those of his immediate predecessors. More than any other part of the book, the final chapter is offered as a tentative interim report, and a personal perspective.

Iron Orchid by Stuart Woods
Someone in the House by Barbara Michaels
Baking by Hand by Andy King
The Complete Malazan Book of the Fallen by Steven Erikson
The Book of Brownies (The Enchanted World) by Enid Blyton
Muller, Marcia - [McCone 02] - Ask the Cards a Question 3S(v1)(html)
Harry Truman's Excellent Adventure: The True Story of a Great American Road Trip by Matthew Algeo
[The deBurghs 07] - Reynold De Burgh: The Dark Knight by Deborah Simmons
Nigger: The Strange Career Of A Troublesome Word by Randall Kennedy
The Elemental Mysteries: Complete Series by Hunter, Elizabeth