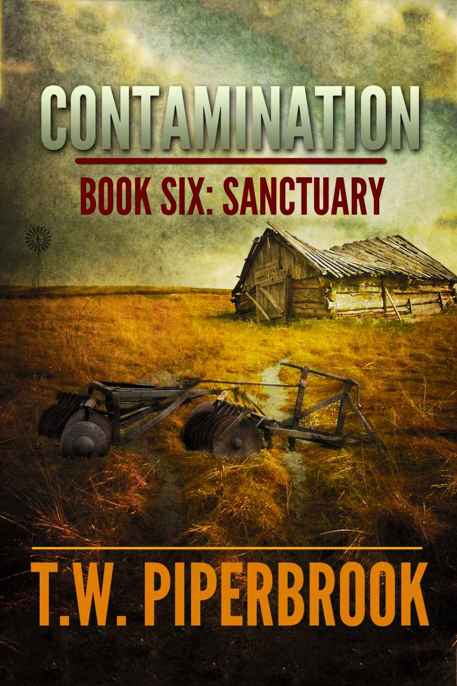 Part Two - Devil Among Us

In a world full of danger, reprieve is only temporary.

For days the farmhouse has been a place of safety for Dan, Quinn, Meredith, and John. But a new threat is emerging—one that threatens to destroy their group from the inside out. In order to get to freedom, they'll need to survive one last journey.

Want to know the instant I have a new book out?

Save money and get the
Contamination Boxed Set (Books 0-3)
at a discounted price!

PART ONE: ENDLESS FIGHT
Chapter One

Meredith awoke with a scream lodged in her throat.

She stifled the sound and bolted upright, her eyes rolling around the dark room. Although she was vaguely aware she'd been dreaming, the memory still lingered, and she was stuck between the realm of nightmares and reality.

She could only remember bits and pieces of what she'd seen—infected bodies tumbling over one another like a tidal wave, her companions torn apart in the aftermath. She held her hand over her heart, hoping to quell its ferocious beating, but it pounded like a jackhammer.

Although some part of her knew she'd had a nightmare, another part of her was still scared—
terrified
—that she'd discover her companions missing. Her eyes flitted around the room, taking in the dark outlines of two bureaus, a mirror, and a painting on the wall. She swiveled to her left. John was breathing deeply in the bed next to her, undisturbed. Ernie, her black poodle, was sleeping between his legs.

She strained her ears, thinking she'd hear something amiss, but the house was quiet. She could hear the faint din of crickets outside, but that was it.

She did her best to convince herself but couldn't shake the feeling that something was wrong. She had a choice to make. She could either lie back down and do her best to sleep, or she could make a quick pass of the house.

She swung her legs off the bed and reached for the gun on the bedside table. The piece was where she'd left it, ready to provide comfort. She retrieved it and stood upright, trying to dampen the creak of the floorboards. The last thing she wanted was to wake Quinn in the next room.

A cool breeze filtered in through the cracks of the boarded window next to her. The power had gone out several days ago. Even before that, they hadn't been using air conditioners or fans.

These days, noise was best kept to a minimum.

She peered out the window. The backyard was open and empty. The pale light of the moon shone off the grass; the wind rustled the blades. A few bats fluttered overhead, searching for prey in the cover of night.

She proceeded through the bedroom, keeping her eye on the closed door. In her former life, she'd slept with it open, but she'd resorted to shutting it.

It was one more layer of protection against the infected, should they get inside.

When she reached the door, she put her hand on the knob and paused. Her heart collided with her ribcage. In this new world, she was wary of entrances and exits. Once a door was closed, there was no telling what was on the other side.

She froze, listening. More crickets. The hoot of an owl.

Meredith's blood raced. She clutched the gun and glanced over her shoulder. She contemplated waking John, but thought better of it. It was probably just Dan, keeping watch. It'd been his turn to keep guard.

Calm down, Meredith. It's just your brother-in-law.

She swallowed and twisted the doorknob.

Despite the warm temperature of the house, the knob was cold in her hand, and it deepened her fear. She turned the knob all the way to the left, then stopped and waited.

The footsteps ceased. Someone was listening. Listening for
her
.

She strained her ears, trying to decipher who—or what—was in the house. Was she imagining things? Was she still in the throes of a nightmare?

She squeezed tighter on the gun, flexing her fingers to verify she was awake. If this was a nightmare, it was the most vivid one she'd ever had.

She sucked in a breath and opened the door.

The hinges creaked quietly. The hallway was dark, but she could detect the faint glow of a flashlight from the kitchen.
Dan?
She crept into the hall, inching forward on shaky legs. She glanced to her right, but there were no other shapes in the hall around her. The door to Quinn's bedroom was closed. If there was an intruder in the house, she couldn't see them.

She aimed the pistol at chest level. To her right was an open door leading to a bathroom. She peered inside, but saw nothing unusual. They'd been staying at the Sanders' house for a few days, and she was already accustomed to the layout. The objects in the bathroom were all familiar. The shower curtain hung open; no shadows lurked in the tub.

She kept going. At the end of the hall, she stopped. The kitchen was on her right; the living room was on the left. In neither did she see anyone—or any
thing
.
But a flashlight—Dan's—was on the floor in the kitchen, rolling softly back and forth on the linoleum.

She knew she'd heard something.

Groggy or not, she hadn't been dreaming.

She took two more steps, her anxiety mounting, and peered into the kitchen. Through the pale glow of the flashlight, she saw an empty chair by the back window.

Her eyes darted to the door. It was still barricaded. The windows were still boarded, untouched. Had Dan gone outside? If so, how? They'd been using the back door to enter and exit. The front door was also blocked off. She couldn't imagine him leaving—at least not without telling anyone.

She swiveled in all directions, suddenly afraid that the house was unguarded, that she was the only thing standing between
something
and the rest of her companions. All the shadows seemed unfamiliar and menacing, and she pointed the gun at each of them in turn.

She'd just taken another step when someone called her name.

"Meredith!" a voice hissed from the living room.

She turned to face the noise. To her left, next to a sofa, a dark shadow crouched down, hiding. It was Dan. She hadn't spotted him before. She blew a nervous breath and walked over to join him.

"My God, Dan! I thought someone was in the house!" she scolded. She hunkered down beside him, her hands still shaking. "You scared the hell out of me!"

"Is everything all right?" she asked.

Dan gestured through a crack in the boarded living room window, then scrambled back so she could take a look. Meredith took his place and squinted across the front yard. Deep on the horizon, a group of creatures was creeping toward the house.

"We need to wake the others!" Meredith said.

"Let's wait. I've been watching them for about ten minutes. They're going pretty slow—I think they're almost dead. I can take care of them without disturbing everyone."

Dan was already upright, walking across the room. She followed him into the kitchen. On the way, she listened for signs of John, Quinn, or Ernie, but it sounded like they were still asleep.

Dan leaned over and whispered in her ear.

"There's no reason to alarm everyone," he said.

Meredith sucked in a bated breath. For the past few days, they'd seen only a few of the creatures, and the ones they'd seen had been easy enough to take care of in the daytime. At the same time, the prospect of Dan going outside alone—and at night—made her uncomfortable.

She watched nervously as Dan headed for the back door.

"Are you sure you don't need help?" she asked.

"I'm sure. Stay here and keep watch." Dan patted his gun holster. On his hip were several knives. "I'll be fine."

He moved toward the barricade, grabbed the edge of a table, and began moving it. Meredith assisted him. Once the path was clear, Dan unlocked the back door.

Before she could respond, he swung open the door and stepped out into the night.

Meredith watched him creep along the side of the house. She kept one hand on the door, the other on her pistol, straining to keep him in view. Within seconds, he'd rounded the corner and was out of sight, headed for the front yard.

She exhaled and closed the door, locking it. As she did, she tried to dispel the thought that her brother-in-law would never return.

He's a police officer, Meredith. He survived an eight-hundred-mile journey to get here. We've survived several days in this house. He'll be fine.

In spite of her attempts to reassure herself, she was still uneasy. After securing the back door, she padded across the house to the front window and bent down to keep watch. She stared out into the front yard.

The moon had emerged from behind a set of clouds, and it hung like a pendant in the sky, casting a pale glow over the landscape. She scoured the property, locating the shadowed form of Dan as he traveled across the grass. His movements were graceful and soundless, as if he were nothing more than a projection superimposed on a backdrop.

Three shadows clambered toward him.

She covered her mouth with her palm, hoping to calm her breathing. She'd coexisted with danger since the contamination began, but it was difficult to contain her panic. What if Dan never came back? What if something happened to him, and Quinn lost her only remaining parent?

She watched as Dan skirted closer to the shadows. She could see the glint of a knife in his hand, and he raised it into the air as he approached the creatures. The things were moving erratically, wobbling as they walked. It shouldn't be difficult for him to dispose of them—not in the weakened condition they were in. He was probably using the knife to avoid the sound of gunfire.

He swung the blade, felling the one closest to him.

One down
, she thought.

She heard a faint groan in the distance—the death cry of an infected—and felt a glimmer of sorrow. No matter how many creatures they killed, it never felt any better. She felt awful about what the people had become. It wasn't their fault; they hadn't asked for this.

Her only hope was that they were beyond pain.

Dan approached another of the shadows, and he jabbed at it, sending it to its knees. Then he rammed the blade into its shadowed head.

Sunlit by Josie Daleiden
A December Bride (A Year of Weddings Novella) by Hunter, Denise
The Night Book by Richard Madeley
Roberson, Jennifer - Cheysuli 05 by A Pride of Princes (v1.0)
Bush League: New Adult Sports Romance by Pfeiffer Jayst
Nights Embrace (Others of Seattle) by Rivers, Brandy L
The Blood of Heroes: The 13-Day Struggle for the Alamo--and the Sacrifice That Forged a Nation by Donovan, James
The Serenity Murders by Mehmet Murat Somer
A Passion for Leadership by Robert M Gates
I, Coriander by Sally Gardner