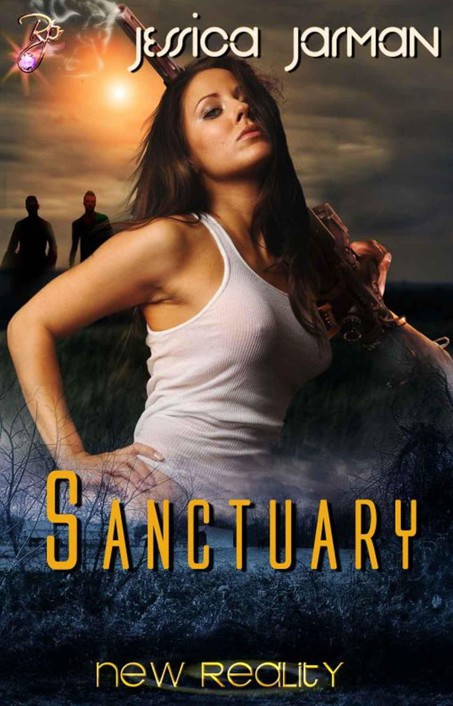 To Chris—for keeping me sane while writing/finishing this.
And to Brian. Always.

Grace Summers looked up at the sky, which grew darker by the moment. She was going to have to make camp soon. And her aching body thanked that inevitability. Though, it’d be a brief respite as she had many miles to cover tomorrow. And the day after that, and the day after that…

She shifted the rifle she held and moved on, searching for a good place to stop for the night. Glancing to her right, she saw her dog, Callie, sniffing the brush and gave a low whistle. The German Shepherd immediately abandoned whatever had caught her attention and fell in step beside her owner. Grace gave her a quick scratch behind the ears.

After a few minutes, Grace stopped and rested the rifle against a nearby tree before shrugging the heavy pack off her back. Eyes closed, she stretched her arms up and arched her spine, stifling a groan as her muscles protested. Knowing she needed to set up camp and get water and food inside her before she settled down for the night, she resisted the urge to sit and take her boots off. She squatted, opened the pack and, pushing aside the mess kit and vacuum sealed packs of powdered beans, pulled out her water bottle. Wrinkling her nose slightly, she pushed the thought of her coming meal from her head. Food was fuel. And she needed fuel, no matter how bland and unappetizing.

Grace straightened and walked through the brush to the river she’d been traveling along for the past several days. At the edge of the water, she knelt and set aside the items in her hands. Cupping them, she filled her palms with cool, clear water and bent forward to splash her face. She repeated the action, once then twice, before filling her bottle and going about the motions that had become her norm. Looking for kindling and branches for a small fire, preparing and heating her reconstituted beans, sitting beside the fire, staring into the flames while eating. As she fed the last of the beans to the dog, who licked the dish clean, Grace gave her a pat on the head.

“Sorry for the slim pickings, Cal,” she said. “Maybe we’ll come across a squirrel or two tomorrow. Would you like that?” She laughed when Callie rolled onto her back and exposed her belly. Grace rubbed vigorously, crooning, “You would, wouldn’t you? A nice, fat juicy squirrel? Or a yummy rabbit?”

She yawned, her jaw cracking, and rose to her feet. Another trip to the river to clean her utensils and refill her bottle then she sat beneath the tree closest to the fire and leaned against the trunk. Callie moved beside her and laid down, her head on Grace’s thigh. Grace thought briefly about pulling the small tent from her pack.

Scratching behind Callie’s ear, Grace closed her eyes and, with her other hand, pulled the rifle close to her side. “In a minute,” she mumbled. “Just…a…minute.”

As exhaustion blanketed her, Grace fought against the tears that built behind her eyelids. She hated this time of day, when everything that had happened the past months rushed to the forefront of her brain. She did everything she could to push it back. Dwelling on the events that had brought her to this point wasn’t going to change anything. It wasn’t going to erase all the shit she’d seen and experienced in the last months. It wasn’t going to make her feel safe and comfortable. And it sure as hell wasn’t going to bring her family back or make her any less alone.

She swallowed the lump in her throat and sighed. Alone. That about covered it. She was alone in this world, and sometimes—hell, if she were honest,
most
times—it didn’t even seem worth the trouble to keep pushing forward. But she would. She’d made a promise. Her father’s face came to her mind, and despite the overwhelming sadness, she smiled. God, she missed him, so much it hurt. And it was because of him she wouldn’t give up. Grace would do what he’d wanted, what he’d told her to do as he lay dying.

The sound of Callie’s growling jolted Grace upright from where she’d slumped farther against the tree trunk. She gripped the rifle and jumped to her feet even before her eyes were fully open. Bringing the gun up snugly against her shoulder, she scanned her surroundings to find what had Callie sounding the alarm. She didn’t have to look far.

Her heartbeat sped and her breathing stuttered when her gaze landed on two men standing no more than twenty feet away.

“Whoa.” The taller of the two stepped forward, palms out in a peaceful gesture. He stopped in his tracks when Callie let out another low, menacing growl and moved in front of Grace. “Wanna call off the hound?”

“Not really,” the other man snapped.

“Let me rephrase.” She shifted slightly until the rifle was leveled directly at him. “Keep moving.”

“We’re not looking to cause any trouble,” the first man assured. “I’m Noah; this is Ethan. We’re just passing through, looking for a place to catch a few winks before moving on.” He gestured around. “There’s plenty of room, and we’ll share.” He pointed back at his partner, who sighed and lifted a hand. Four good-sized fish dangled from a line held between his fingers.

“God, enough.” Ethan stepped forward. “You have no claim on the place. It’s late and dark; I’m tired and fucking hungry. If you don’t like it,
you
can move on.”

“Ethan,” the other man admonished. “There’s no need—”

“Hey,” Grace interrupted, exasperation edging out the panic. “Last I checked, I’m the one holding the gun, so I’m sure as hell not going anywhere.”

“I’m not your sweetheart!” she snapped. “Do you always make everything so damned difficult? I was here first, and I don’t make camp with men I don’t know.” For good reason. She shook her head slightly and tried to push thoughts of her last, and only, encounter with another person on this journey. Her stomach roiled and her dinner threatened to make a reappearance.

Ethan let out an annoyed huff of breath, and Noah moved closer to him. Grace watched as he ran his palm down Ethan’s arm then wrapped his fingers around the other man’s hand. Ethan turned his head, and the men exchanged a long look before responding.

“And that’s completely understandable. Smart,” Noah said “But it’s late, dark; we aren’t going to be able to get much farther in any case. We just want to eat, sleep, and, in the morning, we’ll be on our way. How can we make that happen? What can we do to ease your mind?”

Grace’s gaze drifted back to their linked hands, where Noah’s thumb slowly rubbed the back of Ethan’s hand. She tightened her grip on the rifle and inhaled a shaky breath.

“You’re lovers?” she blurted, jerking her head back to look at their faces.

Ethan Erikson narrowed his eyes, studying the woman in front of them. Her question echoed around them, and unease settled in his gut. The last thing they needed was someone who had “issues” with their life choices to be behind a gun pointed in their direction.

“We are,” his partner, Noah Hill, said simply.

Ethan waited, trying to gauge her reaction. Something in her tone earlier, when she’d mentioned not settling with strange men, had raised red flags in his mind. When he watched her entire body visibly relax and she lowered the rifle, his suspicion was reinforced. She’d run into trouble with men out here. And if the fact he and Noah being together took away some of the fear, Ethan would bet anything the trouble was sexual. And that thought pissed him off. Hell, taking advantage of anyone went against everything pounded into him.

He noticed, despite her newfound comfort with having them there, she kept the rifle in hand. Reaching down, she scratched the large German Shepherd behind the ears.

“Come on, girl,” she murmured. Woman and companion walked to the edge of the circle of light cast by the flames.

“Thank you,” Noah said, shrugging his pack from his back and dropping it to the ground. After giving Ethan’s shoulder a quick squeeze, he headed to search the brush for branches to feed the fire.

Ethan shifted the line of fish from hand to hand as he removed his own pack. He rolled his shoulders then walked to the fire. Crouching, he used a thick branch that rested beside the circle to poke at the burning wood.

“Here. These should work to cook your fish.” Two sturdy branches came into his line of sight, and he glanced up, meeting the woman’s gaze. He couldn’t quite make out the color of her eyes. Blue? Maybe green?

“Thanks.” He nodded. “Appreciate it.”

She gave a curt not and, once his fingers grasped the branches, spun on her heel and walked away. He turned slightly and watched her go to where her things sat. She rummaged through her bag and was soon setting up a small tent.

Noah came to his side and added fuel to the fire. Ethan, happy he’d taken the time at the river to gut the fish, made quick work of getting them ready to cook. Soon, the smell of roasted meat filled his nostrils, and his stomach growled loudly, causing Noah to laugh.

The woman came back to the fire, stirring something in a small metal pot. She leaned over and rested the dish on the edge of the glowing embers. “Beans, to go with your fish.”

“Save your thanks for after you taste them,” she said dryly. “They’re reconstituted. Big on filling your belly, not so much on taste.”

“Nice to meet you, Grace,” he said cheerfully.

Her lips twitched up into a small smile, but she stayed silent.

“Where you headed?” Ethan asked, turning the fish over the flames. “Been out here long on your own?”

“North,” she said simply. “And it’s been long enough. I’ll be happy when I get there.”

“Where is ‘there’ exactly?” Noah questioned.

Grace hesitated a moment then answered, “A little town on the river. It’s just a small place we agreed to meet if anything…well, if the shit hit the fan, so to speak.”

“Good, I’m glad you have someone,” Noah said sincerely.