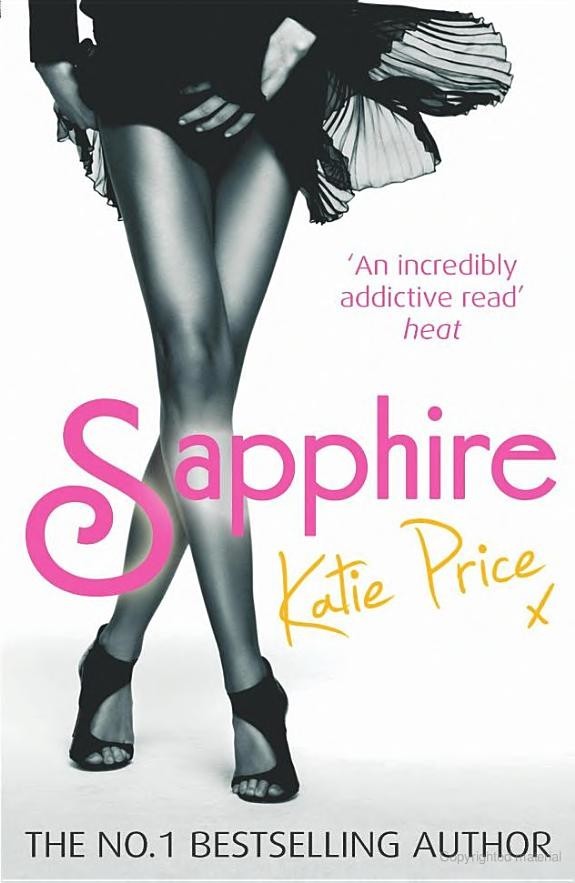 Sapphire Jones doesn’t believe in relationships any more – not since she caught her husband in bed with another woman.

Now Sapphire only sees men on her terms, which is why her current lover is young, good-looking, and great in bed. What more does a girl need?

Sapphire puts all her passion into making a success of her lingerie and hen weekend business, and life seems pretty good. Until she meets a charming businessman who is more than a match for her. And then a hen party organised by Sapphire ends in disaster, and she becomes front-page news for all the wrong reasons.

Suddenly her business is in jeopardy, her private life is falling apart, and in the middle of all this Sapphire realises that she is not immune to love after all. But has she left it too late?

Jordan
:
Pushed
to
the
Limit

You
Only
Live
Once

Ponies to the Rescue

Time for a Picnic

SAPPHIRE JONES DIDN’T
believe in relationships, not since she had arrived back from work unexpectedly early to discover her husband in bed with another woman. Two years on from the bitter divorce Sapphire remained deeply cynical about men. Of course she still had them in her life – she had no intention of living like a nun – but only on her terms, which was why Jay, her current lover, was four years younger than her, extremely good-looking, didn’t place any emotional demands on her (so far, fingers crossed) and was great in bed. What more did a girl want? Sapphire reflected as she parked her cherry red Mini Cooper in the underground garage and headed for the lifts up to her penthouse apartment.

She was looking forward to sipping a large vodka and tonic in the bath, then meeting up with her friends Jazz and Sam for drinks and dinner, and maybe rounding off the night by inviting Jay over for no-strings-attached sex. She loved being one hundred per cent in control and knowing exactly what she was doing, so she was pissed off to discover Jay sprawled out on her sofa (her brand-new, mocha brown Italian leather,
very
expensive sofa) watching the football. What the hell was he doing here?

‘Babe!’ he called out as soon as he saw her. Sapphire gave him her WTF look. ‘You’ve forgotten haven’t you?’

Jay got up. At six foot two he was a fit guy in all senses
of the word. He was a personal trainer, had biceps that Sapphire adored caressing, abs of steel, the cutest bum and long muscular legs. Looks-wise he resembled Wentworth Miller from
Prison
Break
, though even better-looking with the same buzz-cut hair, deep brown eyes the colour of molten chocolate, chiselled regular features and a very sexy mouth. Seeing him standing there in his tight white vest and running shorts, Sapphire wondered if a change of plan wasn’t such a bad idea after all. She could have sex and then go out for dinner. She smiled as she wound her arms round his neck and pulled him close to her, ‘What have I forgotten, babe?’

‘You agreed you’d come running with me and then we’d have dinner. You know, so we could spend more time together?’ Jay’s beautiful eyes had a slightly hurt look.

Fuck! Sapphire had completely forgotten. She hated running. She slid one arm from round his neck and ran her hand caressingly over the steel abs, ending up on the running shorts, the very well-filled running shorts. ‘I’ve got a much better idea,’ she whispered. ‘And isn’t sex supposed to be good for toning up?’

Jay sighed. ‘Not as good as running, babe.’

Double fuck! There was no way, just no freaking way that Sapphire was going to forgo her plan of drink, dinner, sex, or sex, drink, dinner for a
run
!

‘Trust me: you won’t want to miss out on this,’ she murmured, falling to her knees. The consolation blow job. Surely Jay would not turn this down?

Another sigh, ‘Sometimes, Sapphire, I think you only see me as being good for sex.’

As she had predicted, Jay didn’t tell her to stop. And when she’d rewarded him with a top of the range BJ he reciprocated with some mind-blowing oral work on her. So much better than her last lover who rarely returned the favour. He didn’t last long. Sapphire had high standards when it came to her lovers and if they didn’t cut it, she wasn’t going to hang around. All in all she reflected lying back on the sofa in a dreamy post-orgasmic haze, the evening was going very well. She’d have a quick shower and then dash off to meet Jazz and Sam. She made to get up, but Jay pulled her back next to him, ‘Where are you off to?’ he murmured sleepily.

‘I’m supposed to be meeting Jazz and Sam at half eight.’

‘You were supposed to be spending the evening with me.’ The BJ glow had worn off a bit bloody quickly. Some men were hard to please!

‘When?’ Jay demanded holding onto her wrist.

‘I could probably do tomorrow night.’ Hopefully it would rain and surely even Jay wouldn’t make her run in bad weather. She could pretend to have a cold coming on or something; she remembered reading that it was very unwise to exercise when you were ill.

‘Fine, same arrangement, a run then dinner. Don’t worry, I’ll cook, I know what a fucking disaster you are in the kitchen.’

Sapphire didn’t liked being told that she was a disaster at
anything
. But she decided to be cool. ‘Babe, I’m the reason they invented ready meals.’

Jay laughed and let go of her wrist. ‘And when am I going to meet your friends?’

Sapphire shrugged and muttered, ‘Soon’, and dashed to the bathroom before he could think of anything else to say.

It was funny, she reflected, under her power shower; Jay wasn’t turning out to be the easy-going boy toy she had hoped for. Please God, don’t let him want a relationship!

‘Sapphire! You’re such a total bitch!’ Her best friend Jasmine – known as Jazz to all her close friends – exclaimed once Sapphire had told them her reason for being late. ‘I can’t believe you were so mean to him.’ She paused and frowned, wrinkling her cute nose and flicking back her shoulder-length white-blonde hair. ‘Well, actually I can, knowing what you’re like.’

‘Oh come on, he knew what he was getting into when he got involved with me; I never said anything about having a relationship.’ Sapphire sulkily swirled the ice round in her vodka and tonic.

‘You’re the only woman I know who doesn’t want a relationship,’ Sam put in. ‘Sometimes I don’t know whether to believe you.’

Sapphire scowled in mock disgust and drummed her red nails on the table. Maybe she did act all tough where men were concerned but that was because she was never ever going to let herself be hurt by one again.

She’d known Jazz and Sam for years as the three of them had gone to the same secondary school. She couldn’t imagine not having them in her life. Jazz was the polar opposite of Sapphire, a pretty, blue-eyed blonde to Sapphire’s striking and dramatic beauty: dark blue eyes, full sensuous lips and long jet black hair.

Sam had shoulder-length auburn hair, quite a pretty face, with hazel eyes and a cute dimple on her right cheek. But as far as Sapphire was concerned Sam was
hiding her light under a bushel or two. Sam had been dieting on and off for as long as Sapphire had known her, yo-yoing from a size twelve to an eighteen. Now she had a size sixteen. Sapphire supposed it wasn’t easy for Sam being friends with her and Jazz – Sapphire was an eight and Jazz a ten, but sometimes she despaired of Sam’s lack of self-control and thought if she had to hear about one more diet plan she would scream.

The three girls were as different in personalities as in looks. Sapphire was driven, ambitious and her default position was never to trust anyone. Jazz was slightly dizzy, always saw the good in people and was the most hopeless romantic Sapphire had ever met. She’d been going out with her boyfriend Ben for the last three years and really wanted to do the whole get married, have babies thing, which left Sapphire cold. Sam could be fun and had a wicked sense of humour when she chose. But she was constantly putting herself down and her love life was a disaster area. She always ended up going out with men who treated her like shit, which also drove Sapphire mad: she just didn’t get that whole low self-esteem mindset that Sam seemed locked into.

The three looked so different that they’d often joked they should form a girl band. There was just one slight problem: none of them could sing. But as Sapphire said, when did that ever stop anyone? Instead, Jazz worked as a beautician in Sapphire’s beauty rooms and Sam worked in a small jeweller’s and made her own jewellery when she got the chance. She always talked about having a jewellery line of her own. Sapphire didn’t like to point out that Sam was nearly thirty and had better bloody get on with it . . .

‘So, when are we going to meet sex-machine Jay?’ Sam asked.

Sapphire shook her head, in absolutely no hurry to make that arrangement. Since her divorce she found it
much easier to compartmentalise her life and tried where possible to keep lovers and friends apart.

‘You could always bring him to the school reunion,’ Jazz put in.

‘God! You’re not still on about that are you?’ Sapphire had been Facebooked about the reunion a while ago but had no intention of going and had deleted the event from her profile as soon as it came up. She couldn’t imagine anything worse than meeting up with some of her classmates, who were bound to bombard her with questions about Alfie, her ex-husband, who had also gone to the same school.

‘It’ll be fun,’ Jazz insisted perkily, fiddling with the hot-pink hairband that matched perfectly the pink of her immaculately manicured nails. Jazz was into colour-coordinating in a big way and always matched her nails to her accessories.

Prisoner B-3087 by Alan Gratz
A Dangerous Harbor by R.P. Dahlke
He's Gone by Deb Caletti
Beyond Eighteen by Gretchen de la O
As Close to Us as Breathing: A Novel by Elizabeth Poliner
Benton: A Zombie Novel: Volume One by Jolie Du Pré
Fall Black In Love 1: When Henry Met Millie by D. Camille
White Death: An Alex Hawke Novella by Ted Bell
Kidnapped at the Capital by Ron Roy
After the Fall: A Vampire Chronicle (Book One) by Gorry, Mary Ellen