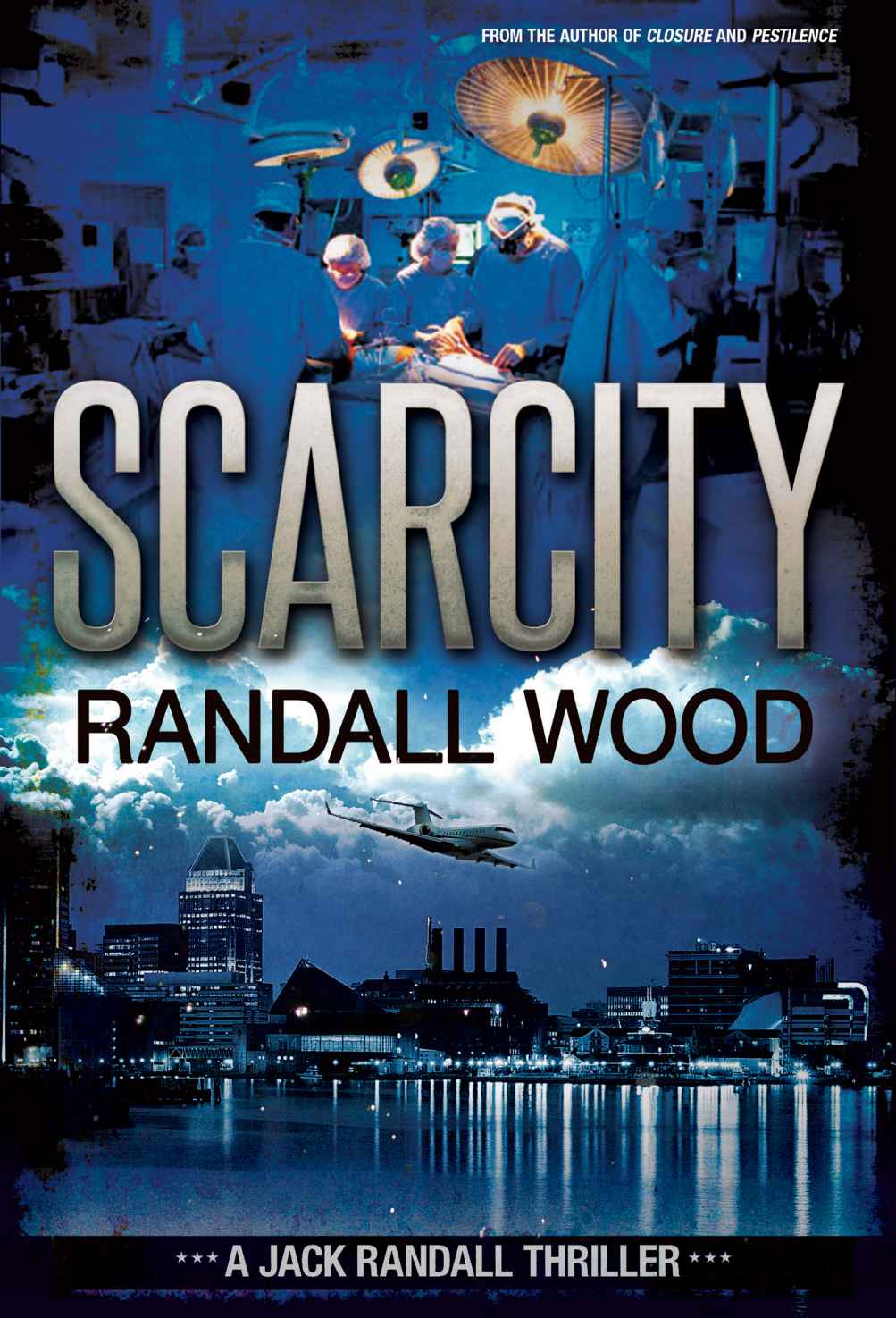 This book is a work of fiction. Names, characters, businesses, organizations, places, events and incidents either are the product of the author’s imagination or are used fictitiously. Any resemblance to actual persons, living or dead, events, or locales is entirely coincidental.

All rights reserved. Printed in the United States of America. No part of this book may be used or reproduced in any manner whatsoever without written permission except in the case of brief quotations embodied in critical articles or reviews.

and the portrayal of the screw are registered trademarks of TensionBookworks.

The doctor sees all the weakness of mankind.

“. . . under conditions of scarcity . . . justice demands that those who have consented to be posthumous organ providers, i.e., those who have fulfilled the moral duty to consent, be given first priority access to the cadaver organ pool in the event of need. Non-consenters are to be given second priority access.”

Service to others is the rent you pay for your room here on earth.

Anita ran the brush through her dark hair three more times before standing and examining her wardrobe selection again. She had changed four times, somewhat of an average for her, before deciding on the new jeans and loose shirt. It was a far less provocative choice when compared to what she had worn to the nightclubs the previous night. The tight dress, high heels and makeup would not have met her father’s approval, and she had been forced to sneak out of the house to avoid him seeing her. While she loved him dearly, he was having a hard time letting his little girl grow up. Her teenage figure was growing in all the right places and she enjoyed the attention she attracted from the boys at the clubs, attention she knew her father would frown on. So she would dress down for him today as she was only going to the mall with her friends. She added some jewelry to her wrists and ears before grabbing her cell phone and running down the stairs.

She bypassed her mother at the stove and rounded the table to reach her father. He lowered his newspaper for her kiss and his smile was genuine as she continued on to buss her mother’s cheek while she scrambled eggs at the stove.

Mr. Perez frowned slightly at that as he examined her clothes. She was obviously going somewhere this Saturday morning and that usually meant a request for money. But she was fifteen years old and still called him Papa. He knew he was being manipulated, but he also admitted that he let it happen.

“Yes, Papa, with Consuela and Maria, just for fun.”

“Should I call Juan to drive you?”

“Maria drives now?” He turned to his wife. “When did this happen?”

“She’s sixteen now. Did you not notice?” His wife laughed as she set the eggs in front of him. He folded the newspaper and tossed it aside before biting into them and burning his tongue. He examined his daughter while she ate some banana with her fingers and tapped the screen on her phone. The bracelets jingled with every bite.

“I would prefer that you not wear so much jewelry. It attracts the wrong kind of attention. We talked about this, remember?”

Anita rolled her eyes before smiling at him. “Papa, it’s the mall. They have security, and I won’t be alone, I’ll be with my friends.”

Mr. Perez opened his mouth to say more, but a look from his wife cut him off and he added more eggs to it instead. His daughter’s teenage sense of invulnerability was well established. She felt that her father’s wealth would shield her from the dangers of the world as it always had. But her father knew better. That same wealth could make the world more dangerous. It was his fault really. Maybe he had protected her too much. But like any parent, he hoped that such lessons could be avoided.

A honk from outside caused her to flip the phone shut and stand. She shoved the last bite of banana in her mouth before starting for the front door. She made it around the corner before returning with a grin. Her father already had his wallet out and was extracting a credit card. She took it with the smile that he loved before planting a kiss on his cheek.

Her mother sat down with her own eggs and poured herself some orange juice before smiling and shaking her head at her husband.

He picked up the newspaper again and hid his grin behind it.

Anita’s friends had shown up only a half hour late, which was somewhat early for them. She piled into the convertible and they immediately become engrossed in a rehashing of the previous evening, what boys they had met, which ones they wished to meet again, before half-arguing over who had seen which one first.

None of the girls noticed the two men following in the new, somewhat ambiguous car. The two men were not alone, but part of a six-man team who constantly rotated their surveillance of the girls. They were experienced men, as this was their trade and they were long past their first time. They switched every hour with the other two-man crews hovering around the outdoor mall at a five-block radius, ready to move in when the first good opportunity presented itself.

Three hours later Anita dropped her bags around her feet and collapsed into a chair at the mall’s outdoor café. Her feet were sore from the new heels she had bought and she set about changing back to her old ones after the waitress took her drink order. Her friends were also equally burdened by their morning of shopping. Now the café was growing crowded as shoppers looked for a place out of the sun and a cool drink.

“I couldn’t decide what color!”

Anita sipped her drink as she took in all of their bags. Still tired from their previous night out, she was ready to leave right now, but she knew her friends weren’t close to being done. She was done spending money on herself. She would find something nice for her mother next. But she didn’t want to lug all her bags around for another few hours.

“We should take these to the car.”

Anita rolled her eyes before standing and shifting her foot in her shoe for a better fit. The new blister was rubbing, but not as bad as in the new shoes.

“Give me the keys. I’ll take our stuff out.”

“Then I will pee,” Maria added.

“And I will sit here and do nothing.” Consuela smiled and stretched.

Anita took the keys and stuck her tongue out at them before gathering up all of the bags. It was quite a load, but it proved to be more bulky than heavy when she started walking. She left for the car as Maria darted off to the bathroom. Neither of them noticed the man at the next table dialing his phone.

“She’s leaving the other two and going to the car alone. Move in now.”

The leader in the car immediately relayed the information to the others before sitting low in the seat just as Anita emerged from the mall. He watched her struggle under the bulk of the multiple bags as she approached, oblivious to her surroundings. The van pulled into the lot and slowly circled closer.

“Wait till she’s done and on her way back in,” he ordered.

He couldn’t have her locking herself in the car should she notice them in time. If they had to break into the car to get her it would slow things down, possibly enough to cause them to abort. The van pulled away and cruised through the lot as if in search of a better parking spot.

He watched her fumble with the key fob and door before unceremoniously dumping the load of shopping bags in the back seat. She then stooped to check her makeup in the outside mirror, removing her sunglasses and squinting at her reflection in the bright afternoon sun.

He had just given the order when he was startled by the passenger side door opening as the man who had been tailing the girls flopped onto the leather seat beside him.

“Yes, Jesus Christ, you scared the shit out of me.”

They returned their gaze out the window to see Anita finish her primping and start walking back toward the mall, dismissing the van approaching from behind.

“Looks clear on my side, nobody looking our way.”

The lead man grunted before speaking into the phone.

There was no reply other than the immediate speeding up of the van. The side door slid back to reveal two men dressed in face masks and gloves. The girl turned her head at the sound of the revving engine and caught sight of the approaching van.