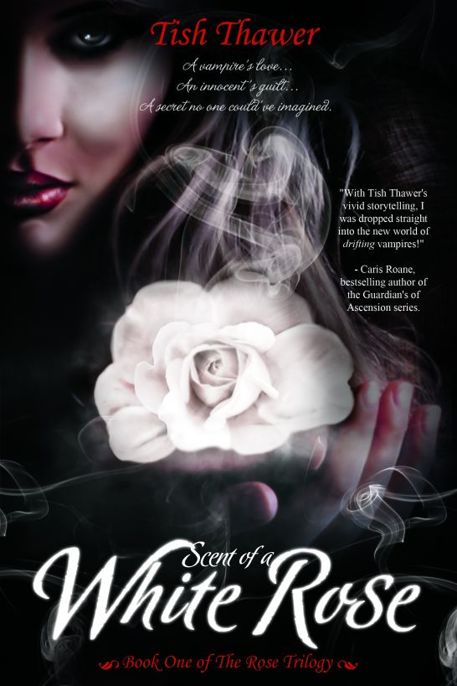 Cover design by Regina Wamba of Mae I Design
and Photography

This is a work of fiction. All of the
characters, organizations, and events portrayed in this novel are
either products of the author's imagination or are used
fictitiously. Any use of name brands is done so under the Fair Use
act.

Licensing Note: This eBook is licensed for
your personal enjoyment only, and may not be resold or given away
to other people. Thank you for respecting the author's work.

Chapter
Twenty-Seven: Hanging Out with Justin

Chapter
Twenty-Nine: Time for the Truth

Chapter Forty: Fire
in My Veins

Many thanks to my family for putting up with me
while I was immersed in Rose and Christian's story. The missed
dinners, the odd writing hours, the annoying questions I would
randomly throw your direction...thank you for all of your support
and, I love you guys with all my heart.

Special thanks go to my wonderful husband, Dee.
You were more than a sounding board, but a true contributor to the
direction in which The Rose Trilogy ended up heading. I love you
more than you'll ever know.

To my mom and dad, who have not only encouraged
me in everything that I've ever done in my life, but who kept on my
butt, asking me every day, "Is your book done yet?", in an effort
to show their excitement and belief in this project. I love you
both. Mom, a special thanks for instilling the love of books in me,
even if it did take 30+ years, and for your eagle eye.

To my amazing cover artist and friend, Regina
Rasmussen Wamba. You took an idea and turned it into magic. Thank
you for putting up with my perfectionism and control issues. (Yes,
I admit it–I'm a control freak!)

To my wonderful editor Kara Malinczak, thank you
for all your hard work to make this something that we could both be
proud of. You rock my socks off!!

To Kiersten Fay, thank you for answering all the
random questions that I sent your way. You are a guiding light.

To Desirae Hennington, your insight and passion
truly helped lead me in the right direction. Thank you.

And to Caris Roane–A special thanks for your
willingness to take me under your wing and for all of your amazing
guidance, but mostly, for your friendship. You are an
inspiration.

But who could’ve imagined the impending
doom?

I opened my eyes and felt death. The presence of
it, the weight of it, the sadness of it. I couldn't believe my mom
was gone. I thought
the weight of it
described it best. It
felt like a weight on my chest...one that would never get
lighter.

Dad said that we'd be okay. "Time heals
everything, Rose," he always told me in that solemn tone of voice.
I didn't believe him. How could I, when I could tell that he didn't
even believe it?

But honestly, I didn't want time to pass. I just
wanted to lay here on my bed, wide wake in my black funeral
clothes, and stare at the ceiling. I just wanted to lay here
remembering when my mom and I had painted my room and hung those
stars and moons. They weren't the stick-on, glow-in-the-dark kind.
They were beautiful crystals in all sizes and colors strung from my
freshly painted black ceiling. They danced and gleamed just like we
had imagined. Well, just like she had imagined. It had been her
idea...my mom, the crafty one.

With a spark of wonder in her voice she'd said,
“It will be beautiful and you’ll feel like you’re sleeping under
the twinkling stars every night.” I wasn’t convinced. But when we
were done, we opened the curtains to let the moonlight flow in, and
I was speechless. She’d been right. I'd been amazed as I watched
the beautiful little stars and moons twinkle and spin right there
in my very own room. God, I love my mom.

I didn't want time to pass. I wanted it to
reverse.

My mom, Loraine Reynolds, was killed in a “freak
accident." Someone broke into our house in the dead of night, and
when they found my mom coming out of her room, they killed her.

That doesn’t sound too freaky, right? Your
average burglary gone wrong. I guess what made it "freaky," was
that the cops were baffled by
how
she had been killed.

The only evidence of violence was two small
puncture wounds on her neck. At first they thought she’d been
stabbed by an ice pick or something, which was strange enough, but
then came the
really
strange part. Her body had been drained
of all the blood. See…
freaky
, right?

The robbers didn’t take anything. The cops
assumed that they must have panicked and left in a hurry. There
were no fingerprints or DNA left at the scene, and no trail for
them to follow. After receiving nothing but countless apologies, we
faced the fact that we were never going to get an explanation as to
how or why my mom had been killed.

It’s now been about six months since the
accident. My dad has gone back to work and I’ve gone back to
school. My college is only about twenty minutes away, but you’d
think it was in a third-world country from the way my dad has been
treating me. I understand that he’s freaked. And, I understand that
I’m now the only family he has left, which he reminds me of on a
daily basis. But damn it, I’m twenty years old, and I’m not a
child.

But, every time I look at him, and I see the
sadness in his eyes, and watch the emotions roll across his face, I
hold my tongue. Because he’s right; I am the only family he has
left. So, if he wants to treat me like I’m ten instead of twenty,
that’s okay. If he wants to have one of his company cars take me
and pick me up from school, that’s okay. And if he insists that I
live with him until I graduate college, that’s okay. But I’ll be
damned if he’s going to stop me from seeing Christian.

“Dad, I just want to go have dinner with some of
my friends after school. Why is that such a big deal?” My voice
rang with exasperation.

“Why is that such a big deal? Really, Rose? You
have to ask that?” He was clearly just as frustrated as I was.
“It’s a big deal because this is a dangerous world and you of all
people should understand that. I'm sorry, but I just don’t like the
idea of you being out after dark.”

I tried to smooth my voice into one of an adult
filled with compassion. “Dad, it’s been six months. I miss Mom too,
and I will
never
forget what happened to her. But we can’t
live our lives in fear.”

“I’m not living in fear; I’m living in reality.
I lost my wife, and I refuse to lose my daughter to the evil of
this world, too.” He sounded defeated as he scooted his chair away
from the table.

I knew this was how the conversation would go,
but you can’t blame a girl for trying. I really wish he would’ve
said yes, because I’m sick of lying and sneaking around. But what
am I supposed to do? I can’t just let him drag me down. I want to
go on with my life...it’s what my mom would have wanted.

As I watched my father put his breakfast dish in
the sink, place both hands on the counter and hang his head, I knew
I couldn’t fight him on this. Just like always...Dad wins.

Resolved to be the innocent “white Rose” he
pictured me to be, I said, “Okay Dad. I’ll be home before sunset.
Do you want me to pick something up for dinner or do you want to do
it?”

“Actually, I have a dinner meeting that I have
to attend, so just have the driver stop somewhere and get yourself
some takeout. And no calling for delivery. I will not have
strangers coming to this house, even if it is just to deliver
food."

I started to protest. I was frustrated that he
could totally dismiss my plans and insist that I come straight home
after school when he wasn’t even going to be there. But then, it
dawned on me…this was the perfect opportunity. It looked like I'd
be skipping dinner with my friends and opting for a little road
trip instead.

“Okay. I’ll just grab something then, but what
time should I expect you home?” I asked innocently.

“Probably around 9 p.m.” He spun around,
straightened his shoulders, and plastered a loving smile on his
face. “I love you, Rose. Thanks for humoring an old man who cares
too much.”

Well, now I just felt like crap. “You’re welcome
Dad. I love you too.”

As I listened to the front door close, I looked
down into the sink and watched our breakfast slide down the drain.
White, runny eggs swirling their way down into the dark hole
towards the disposal. That was me…a white substance, fading and
running like watercolors down a drain into the dark. Man, I wished
I didn’t have to lie to him.

As I climbed into the shower, I realized that
not only did I have to figure out how I was going to ditch my
driver today, but also how I was going to get a hold of Christian
to let him know I was coming down. He always said, “Don’t try to
reach me before dark. I’m dead to the world.”

I knew he slept for most of the day because of
his job, but man, it made trying to plan a spontaneous rendezvous a
little tricky. Well, that was just it! I wouldn't tell him I was
coming down. I’d surprise him.

Christian worked at a nightclub on the outskirts
of town. I’d been there plenty of times, but had never gone in. Not
for the obvious reason that I was only twenty, but instead because
I was usually occupied with Christian lips, as all of my visits
revolved around us making out in his car during his breaks. I
remembered the first time I saw him. That was a night I'd never
forget.