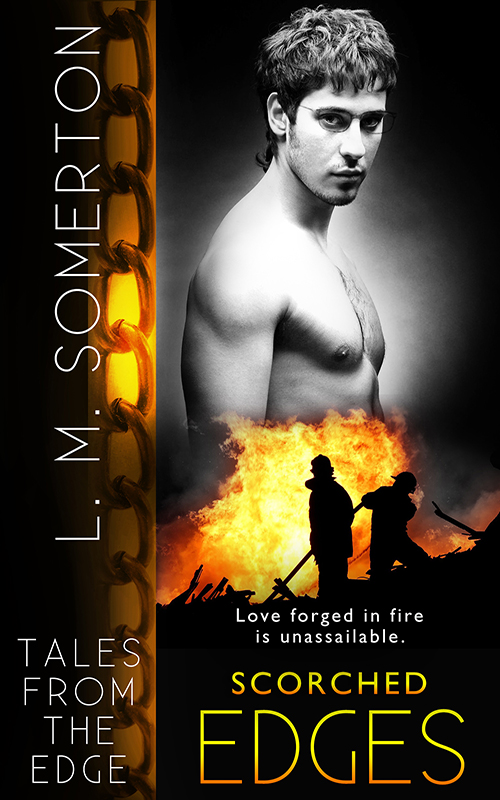 Tales from The Edge

Book six in the Tales from The Edge series

Love forged in fire is unassailable.

Fireman Salter Beauman, Beau to his friends, has had his eye on cute Marty Standish ever since he helped rescue Marty and his boss from the bombed out rubble of Temple Church. An analyst for the security services, Marty is cute, geeky and submissive through and through—even if he doesn’t know it yet.

With a serial fire starter making inroads into Beau’s life expectancy, he decides that there is no time to waste and introduces Marty to the D/s lifestyle. Marty responds with wide eyes, an insatiable desire to learn and the ability to turn Beau on with nothing more than a wiggle of his slim hips.

But Beau has a second, far more malevolent admirer. ‘See me dance’ is the message left at a series of increasingly dangerous fires. Beau and Marty must work together to catch a psychotic arsonist before their love goes up in flames. Literally.

To keeping the flame alive

“Flicker fast, red fury… I think this is a poetic moment, deserving of a verse.

Who falls into the fire shall burn with heat;

While those remote scorn from it to retreat.

Some farther off those cries to laughter turn.

The man who called himself Spark lit a match. The familiar scrape of the tip against the rough strip on the side of the box sent a shiver of expectation down his spine. He gave his cock a quick rub through paint-stained denim, but the flame creeping down the flimsy wood of the match was more important. Just as the heat was about to reach his fingers, Spark touched the flame to carefully prepared kindling. A lazy swirl of wispy white curled upward from the conical pile of wood shavings and petrol-soaked cotton wool. Spark was, as always, fascinated by the way the tiny wooden curls glowed red then blackened and crumbled to ash. Just a touch was enough to ignite the next bit and the next until the whole pile glowed and hissed with life.

“That’s it…speak to me, baby.” Spark pushed the flaming pile carefully back into a hole in the skirting board. He had painted the edge of the hole with fuel and stuffed it with torn-up newspaper. He had no doubt that his baby would take hold and spread. The entire building was a fire waiting to happen, he was just giving it a helping hand. Bare, cracked floorboards, peeling paper, trash in every corner. “Not long now.” Spark loved the thought of his baby climbing and growing inside the wall cavities. Hidden death primed to explode.

“Unstoppable now.” Spark grinned with satisfaction. His cock grew fat and eager. He slipped his grimy hand down the front of his trousers and got a grip on his erection. He sighed in pleasure at the heat that soaked into his fingers. Around him smoke seeped from every crack and crevice in the wall. Glints of amber flickered from bigger spaces. He jerked himself quickly, tasting the acrid fumes on his tongue. He held his breath.
Come, come…come!
His strangled gasp as viscous fluid filled his hand was part triumph, part result of the smoke ferreting its way down his throat. “Time to go.” Spark wiped his hand down his jeans and zipped up. He scuttled through the ramshackle lean-to at the back of the building and through the crawl space he’d kicked through the crumbling brick. The backyard, full of junk and the rusting shell of an ancient Morris Minor, was so overgrown he had no fear of being seen. Brambles grasped at his legs, trying to hold him back. He paused briefly and grinned. The property oozed gray mist and spoke in crackles and spiteful murmurs. A dull glow seeped through the walls.

“That’s it, my love…embrace it, wrap the dump in your arms and squeeze the life from it.” As he watched, flames shot through what remained of the roof. “Soon. Soon, he’ll come.” Spark moved away. He pushed through the rampant undergrowth to a rusting gate and shoved it open. He had time. He pulled the can of blood red spray paint from his pocket and scarred the wall with his message. He checked the back alley, then sauntered along it to the road, humming softly. In the distance, the wail of sirens split the night air. Blue light pulsed as two fire engines roared along the street. Curtains opened and people in their nightclothes came out to their gardens to gawk and gossip with their neighbors. Spark pulled up the hood on his sweatshirt and circled the block. He tossed his paint can into a random wheelie bin—no one took any notice of him amid all the excitement. He mingled with the growing crowd held back by a cordon and watched as his baby showed her temper.

The fire crews ran hoses and had gushing jets of water on the flames in moments but Spark knew they were too late. By the time water drowned the fire, there would be nothing left but a charred ruin. Despite the intensity of the blaze, two firemen in masks with oxygen tanks on their backs kicked through the front door and entered the building. Spark held his breath.
It’s him, I know it’s him. He sees me now. Sees me dance.
Satisfied, Spark walked away.

“We have ourselves a firebug, Beau, and he or she seems intent on destroying every derelict building south of the fucking river.” Commander Norm Archer kicked the leg of his battered desk as he passed. A new dent joined several already present, creating a pattern on the abused wood. Steel toe capped boots came in handy at times of stress. Archer threw himself into his chair and slumped forward to stick his elbows on the desk and rest his head in his hands.

Salter Beauman took an ‘at ease’ stance automatically. Eight years in the marines had fixed the position into his body’s memory and he couldn’t help himself. He stood, legs shoulder-width apart, hands clasped loosely behind his back, and maintained eye contact with his boss. His cranky, soot-streaked, exhausted boss.

“He picks his targets well,” Beau said. “This one isn’t stupid or careless, he only torches places where he can prepare thoroughly without much risk of anyone seeing him.” Beau had little doubt that the arsonist was a man—the vast majority were. He’d eat his boots if the bug turned out to be a woman. “So what’s his motivation?”

“Who the fuck knows?” Archer scrubbed his hands through what remained of his filthy hair. Normally silver, it was currently ash gray. “Could be your average fruit loop with too much time on his hands or he could be trying to get someone’s attention. It might be the fires are the only things that get a rise out of his dick. Fuck. Should have taken early fucking retirement when it was offered.”

Beau chuckled. “They’ll take you out of here in a box, boss, we all know that. Sooner or later this guy is going to make a mistake, they all do eventually, you know that. He’ll get complacent, then he’ll get careless.”

“No doubt,” Archer agreed. “The only question is how much this idiot is going to escalate before the boys in blue are able to arrest his ass and toss it into a nice, fireproof cell.”

Beau grunted. That had them all worried. Every fire put the entire crew in danger, but those started by a criminal who delighted in making things burn were far more risky. “He’s already getting more ambitious. Allotment sheds first then that derelict fish-packing place, this time a house. The property might have been boarded up and empty but it was in a terrace and there were plenty of people around. A residential area. Jesus, if we hadn’t arrived as quickly as we did, it could have been much worse. As it is, two families are going to be living in temporary accommodation for a while, until their homes are cleaned up. You know how long smoke damage takes to deal with.”

“I do. Fucking carbon sticks like glue to every available surface. You’re second in command. You’re closer to the men than I am. How are they dealing with this?” Archer asked.

“Well, we’ve assumed that we had a serial bug on our hands for a while now. The old hands are angry but professional. The newbies are scared and trying not to show it. Every shout that comes in they half expect to be another nasty one and that puts them on edge. Being off for the next forty-eight hours will help. Fatigue makes everything seem worse than it is.” Beau rolled his neck and listened to the cracking joints.

“You’re a little haggard yourself, Beau. Are you worrying about the same thing I am?”

Beau frowned at the cryptic comment but nodded. “All the shouts that can be attributed to the firebug have been during our watch.”