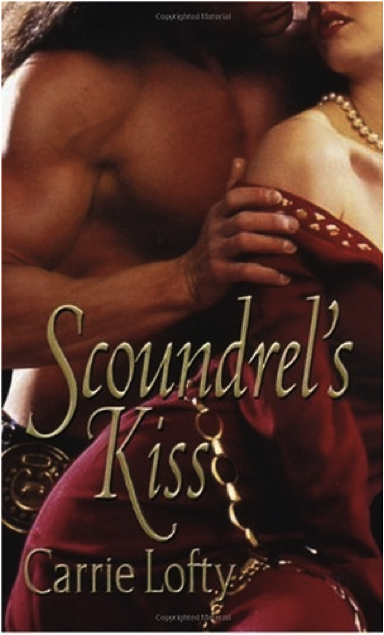 Ada of Keyworth stared at the poppy
pod, the one the apothecary rolled between his skeletal fingers. "What
would you have me do for it?" she asked him in Arabic.

Seated, Hamid al-Balansi lolled the pod
in his palm, around, around. A halo of sunlight from the doorway at his back
left his aged, bearded face in shadow. But she could see his voracious eyes and
the arch of his rank smile. "When was your last taste,
inglesa?"

She licked chapped lips, darting a
glance to his wide pupils. 'Two evenings ago."

"Ah," Hamid said, his grin
widening. "Without your ration, I do not envy your suffering come
nightfall."

"Then don't make me suffer. Give
me the tincture."

"The question is not what I would
have you do for it." His sharp voice held none of the pity she sought.
"Instead, I should ask what you are
willing
to do."

The cramped alcove at the rear of the
apothecary's shop closed closer around her. Ada cringed, the tapestry-lined was
threatening like ominous sentinels. Angled rays of intense afternoon sunshine
illuminated the ragged edges of the tapestry that covered the doorway, shining
around it like a corona, polluting the air with the stench of heated wool. Seated
on a scatter of worn brocade pillows, Ada hugged her knees and concentrated on
the pale green seedpod.

"Please." The plaintive word
grazed the parched tissue of her throat. "I have no money."

"Worse than that, pretty one. You
have debts. Bad debts to unsavory men."

Panic caught fire in her chest, at war
with the chills. "My debts are no concern of yours."

"Oh, but they are. If I give you
the tincture for free, I keep you from asking for another loan." Hamid
teased one of the pod's seams with a ragged thumbnail, releasing a drizzle of
milky liquid. "Your creditors won't appreciate my taking business away
from them."

"Do they have to know?" The
grotesque little whisper hardly sounded like her.

"They always know. These people
you owe, they are the eyes and ears of Toledo—not the high-minded
courtiers you count among your patrons." He raised a bushy white eyebrow.
"Why haven't you asked Dona for the money you need?"

"She is at the Alcazar in Segovia
with King Alfonso, and most of the household with her," Ada said.
"But even if she were here, I could never ask such a favor."

"And you have nothing else to
sell?"

She thought of the scrolls, the ones
she had pilfered from amongst the belongings of Daniel of Morley, her mentor.
The English scholar had helped her and Jacob find patronage with the Condesa de
Valdedrona, then spent the better part of a year tutoring Ada in the half dozen
languages of Iberia. A ragged bit of her conscience had not let her bring the
man's scrolls. They sat in a satchel in her room. Now she wished she had.

He laughed without mirth, the squawk of
a crow. "More's the pity. We shall have to come to an agreement, you and
me."

His fingers steady and sure despite his
age, Hamid picked up a bowl from the squat table at his knee and placed the
poppy inside. With a mortar, he crushed the fragile, unripe pod until nothing
remained but moss-green filaments bathed in creamy resin. He added two more
pods, pulverized them, and sluiced wine over the mash. Deep burgundy muted to a
paler shade, swirling around the bowl. After draining the liquid to a flask, he
added pinches of cardamom and cloves.

Ada absorbed the scene, taking in every
familiar movement She imagined tasting the foul, stinging tincture, feeling the
blissful release of the opium. Relief washed over her. Soon. Soon, she would be
free of the wicked torture of unending dreams, that terrible nightly spectacle.

The only remaining matter was what
Hamid would ask of her. She closed her eyes. A distant part of her
mind—the part that hovered above the pain and the insatiable
cravings— recalled a very different life. Ada of Keyworth, the scholar.
The translator. The woman from England who had once lived for reasons other
than opium. But what had those reasons been? She could no longer recall, a
failing that only added to her despair.

And what would Jacob do when he found
out? He had asked her to make one promise, one ridiculously harmless promise
for her own safety. And she could not keep it.

Hamid capped the flask. The liquid
sloshed as he shook it vigorously, the fluff of his shabby white beard
shivering with the movement. Watching, waiting, Ada faced an unassailable
truth. She lived in that bottle. She would do anything to have it, devil take
the consequences.

"And now the small matter, of my
fee," he said.

His rodent grin sent frissons of fear
up her arms—or was that the sickness? Anything but the sickness of
withdrawal.

If need be, she would stab the grizzled
apothecary in the neck and steal his goods. She had killed once before, and
memories of Sheriff Finch's bloody end revisited her nightly. Finch's
ornamented dagger still dangled at her waist, the last item of value she
possessed. But she could not part with the macabre souvenir, a talisman against
those who would do her further harm.

Movement at the curtained doorway
caught her attention. Two giant men in black robes swished the tapestry aside,
blinding her with a stab of bright sunshine. She released the dagger to shield
her eyes. When they dropped the faded wool into place, the burly guards stood
at either side of Hamid's bony limbs and parchment skin.

And the flask was gone.

"Where did it go? The flask? You
said we could come to an agreement!"

"But our agreement had naught to
do with murder," he said, the dark pools of his eyes alighting on her
dagger. "I felt you were liable to become unreasonable."

Fingers, hands, arms—she could
not stop shaking. "You know I need it."

Hamid pulled the flask from the folds
of his white linen robe. He removed the cork and set it on the table at his
knee. "Keep your peace, if you would. A hasty move might upset the table,
and then your tincture will be no more."

Once she had been able to read people
very well. Particularly men. She had read them like her beloved languages,
knowing just what they needed to hear. But all she heard was a watery streak of
hysteria in her own voice.

"Now here is my proposition,"
he said. "Will you hear it?"

Struggling for a breath, she looked up
at the stern guards, their impassive faces and broad shoulders. One wore a
massive mace at his hip. They made the tiny alcove even more confining. Backed
against the rear wall, she would not be able to leave without their consent.

But she had no desire to escape, not
without the tonic.

For the first time, pity changed the
old man's withered features. His toothy grin faded. With steady hands Ada
envied, he gestured to the open flask. An invitation.

She snatched it from the table. Greedy
swallows bathed her tongue in bitter, spiced wine, trailing a path of fire to
her gut. The warm wash of opium soothed her tattered spirit and quelled the
shakes. Warm. Floating and free. The price he would demand, how she would
satisfy her next, inevitable appetite—none of it mattered.

As the tincture enveloped her senses,
she smiled and retrieved the dagger from her belt. It was no use, holding onto
that grim reminder. "For you. My payment."

"Keep your blade,
inglesa?
he
said. "Where you're going, you will need it."

Hands clasped behind his back, Gavriel
de Marqueda followed two other men from the Order of Santiago. They walked deep
into Toledo's underbelly where the sun lost its way among dark holes and
labyrinthine streets. He concentrated on the journey and eschewed the need to
inquire after their destination. His novice master, Gonzalo Pacheco, revealed
nothing before he was ready to do so, and novices who asked questions only
raised his ire.

No, Gavriel would know soon enough.
Working to dispel his unease, he breathed steadily through his nose despite the
littered foulness of the alleyway. Returning to any city, especially one as
large as Toledo, filled him with dread. An undercurrent of vice, sin, and
violence spoke to him in a language he had struggled to forget.

He belonged to the Order now—at
least, he would after completing Pacheco's final assignment.

Listening to footsteps in triplicate,
he allowed the monotonous parade of sound to drown his misgivings. His place
was one of submission now, and in submission, he would find peace.

"I understand your gloom,
brother," said Fernan Garza, a fellow aspirant. He eyed the dank alley
with his usual mixture of disdain and amusement. "To return to life
fettered by these robes—I cannot bear it, not when we're within reach of
women and wine."

Gavriel pulled the white linen of his
hood to one side, glaring at his companion. "You would rather partake in
the sin than rise above it?"

"Yes. And I'll believe you a
decidedly less interesting creature if you disagree with me."

"I disagree with you,"
Gavriel said.

"Ah, but what am I saying?"
He rolled his eyes skyward and shook his head. "At Heaven's door or in a
beautiful woman's arms, your foul temper would never abate. You're an example
of all that is tedious about our, shall I say, profession."

Pacheco glanced back through the
half-light of dusk, never breaking his powerful stride. "And you're an
example of why noblemen should keep from having more than three sons."

"Master, my feet ache,"
Fernan said, his voice that of an ill-mannered child. "Shall we have a
brief respite?"

Stopping at the top of a stairwell,
Pacheco's white robes roiled around his legs. The red emblem of
Santiago—a fleury cross tapering to the point of a sword!—decorated
the left side of his chest. He nodded toward an entrance at the foot of the
stairs. "We shall take our rest down there. Inside."

Gavriel eyed the scarred wooden door as
he would an armed combatant. Whatever lay beyond that portal would serve as his
final trial. One more task and he would prove himself worthy of the Order.
Failure would mean expulsion. Expulsion would mean a return to life with the de
Silvas—or his revenge against them. He shuddered as sweat beaded at the
base of his neck.

"Lead the way, Gavriel."
Pacheco stared from beneath his white hood. "Unless you would rather
forfeit your obligation."

He nodded and descended the rough,
crumbling steps. Splinters of shale slid beneath his boots, as did human refuse
and slippery garbage. He scraped his palm along the stairwell to find his
balance. Moist patches of rotting mortar gave way beneath his fingertips.

"Fitting you should lead us, as
this place seems in keeping with your disposition," Fernan said.
"Though when we've concluded our ministering, I should like to visit some
happy place of love and verse—in keeping with
my
disposition."

Gavriel turned at the base of the steps
and threw back his hood. Two days of Fernan's prattle on the road from Ucles
would wear a hole in the patience of a saint, patience he worked hard to
maintain. "Brother, I have taken a vow to abstain from
violence—"

"Or else you'd likely cut out my
tongue. I know. God grants small mercies."

Pacheco angled his head of cropped
silver hair toward the door. "Proceed, both of you."

Fingers tensed on the rusted iron
latch, Gavriel breathed deeply and prayed for fortitude. He knew this place.
Rather, he knew places like this. Hidden from sight Shrouded in lies and crime
and hopelessness. Rife with temptation.