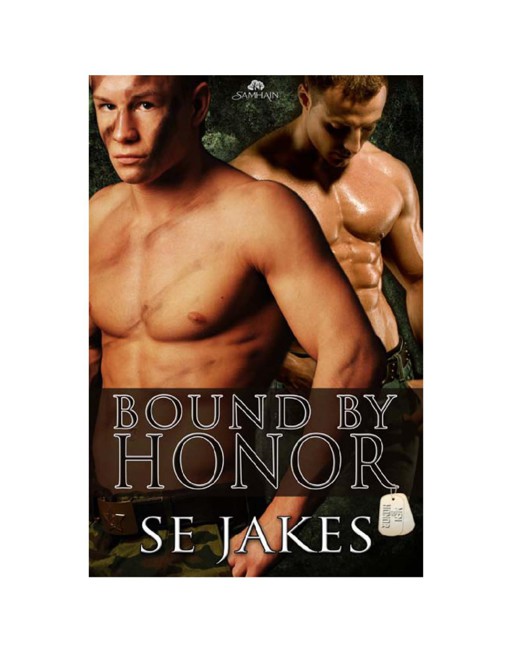 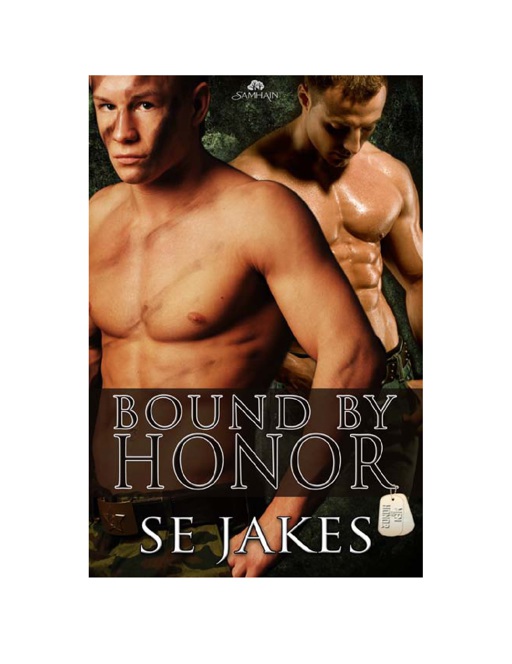 One year ago on a mission gone wrong, Tanner James failed to save the life of Jesse, his Army Ranger teammate.

Before dying in that South American jungle, Jesse extracted a promise that won’t let Tanner rest until it’s fulfil ed—no

matter what it costs him.

even less happy with Jesse’s last request—that Tanner sub for him for one night.

After a rough start, Damon realizes that the tough soldier, despite his protests, aches for someone to take control.

And Tanner senses a hesitance, an insecurity in Damon that makes him wonder if he’s simply a placeholder for Jesse, or

if their tentative connection could grow into something more.

For Jesse’s sake, they agree t o try one weekend together. Then duty cal s, a nd a series o f attacks that have been

happening near the club hits too close to home, making both men wonder if giving their hearts is a maneuver fraught with

Warning: Contains rough language, rougher sex and warriors who fal hard for each other.

This book is a work of fiction. The names, characters, places, and incidents are products of the writer’s imagination

or have been used fictitiously and are not t o b e construed a s real. Any resemblance t o persons, living o r dead, actual

A l Rights Are Reserved. No part o f this book may b e used o r reproduced i n a ny manner whatsoever without

written permission, except in the case of brief quotations embodied in critical articles and reviews.

For you, because you came and asked.

was always pretty sure he’d live to make the trip again. But this time, even as adrenaline raced through his body and

every muscle tensed for battle, hel beckoned with a one-way ticket and without a goddamned firefight in sight.

reputation of being both accessible and safe—the week before Christmas.

He looked up at the dark sign with white lettering at the entrance and thought about turning back and going home.

If he hadn’t promised Jesse that he’d do this, that he’d look up Jesse’s former boyfriend, he’d be home right now,

having just returned from a month-long mission, not about to offer himself up like some bondage sacrifice.

This wasn’t his scene. Not real y. He was al about rough sex, was bisexual with a definite preference to men for as

long as he could remember, used to having to
don’t ask, don’t tell
, thanks to his military career—but this? Having to go in

and greet the owner with a message from his dead lover? Wel , that was fucking weird and could get him thrown out on

Jesus Christ, this was going to suck.

Guyliner. And he flirted in an over-the-top manner with anyone he deemed hot enough.

Tanner knew he’d be the subject of the man’s flirtation. Although he’d shrugged it off his entire life, the looks and

stares and come-ons he’d been on the receiving end of forever told him he was handsome.

He was more interested in being the best Army Ranger he could, spent most days knee-deep in jungle crap with paint

on his face and men who only cared that he could shoot an M-14 with dizzying accuracy.

“Hel o, gorgeous. Please tel me you’re alone.” The man peeked behind Tanner, saw no one and clapped his hands.

“I’l bet you are,” the man said with a shake of his head. “Shame, real y, that they al want what they can’t have.”

The man erupted into peals of girlish laughter and Tanner rol ed his eyes. He’d never been into queens and this was

The man stopped, nearly choked, but before he could answer, he was elbowed out of the way by a much tal er blond

—ruggedly handsome although unsmiling, and Tanner wondered if he was face to face with Damon himself.

But rather than introduce himself, he asked, “What did you say about Jesse?”

“You heard me,” Tanner bit out.

The man nodded slowly. “I heard you. I just don’t know how Damon’s going to feel about this.” He paused. “Are you

sure you want to go there?”

Tanner reacted before he could stop himself. “Why the
fuck
would you care where I want to go?”

The man raised a brow and held up a finger, indicating for Tanner to wait a minute, before disappearing down a back

Last chance to head for the hil s. And despite the ease with which he could do so, Tanner remained rooted in place.

partial y hidden and mixed with whiskey and smoke. It was meant to beckon, to lead men astray…and Tanner didn’t

bother to hide his hard-on.

A few minutes later, Tanner was being led by the blond man who introduced himself as LC back to a private office

with a big
Do Not Disturb
sign on the door.

No doubt,
this
counted as disturbing Damon, but it had been eating away at Tanner for a year now. He had to rid

himself of this burden, do what Jesse asked and then go home and pretend none of it ever happened.

Before going in, he glanced at his watch. Just after midnight. Exactly the way Jesse had wanted it.

LC stared at him, and Tanner, in turn, stared at the floor for a long moment. And then he opened the door and realized

he’d been anything but prepared for Damon Price. Tanner was big and broad and strong, stood six foot three and turned

heads wherever he went. But Damon—he was wel over six foot five, with jet black hair and chiseled features. He stood,

hands at his sides in a deceptively casual stance, dressed in ful black leather and looking like a fucking badass.

“No. But you could probably use one. It would be the only kind of man who could handle you.”

Jesse had closed his eyes then before Tanner could tel him he had no interest in being anyone’s bottom boy.

Because Jesse had been talking to him about boyfriends and Doms when he’d been dying, slowly and painful y in the

middle of a jungle in South America where he and his Ranger team had been on a mission, and Tanner had been fucking

helpless to stop it.

show in his eyes.

This was supposed to bring closure—to both Damon and Tanner. There was no way to break a promise to a dead

Damon studied him for a few minutes. Tanner wasn’t the type to squirm and he wasn’t about to start now. Final y, the

man said, “I hear you have a message from Jesse. And I swear to Christ, if you’re fucking with me, I’l put your head

Tanner snorted in spite of himself. “Okay, sure. I’d like to see you try.”

Damon pushed away from the desk and stood toe-to-toe with him. “Talk.”

Talk.
Yeah, like it was that easy. “Jesse told me to come here—to ask for you. To tel you that…”

Fuck. He shifted, aware that the proximity of Damon was freaking him out. If he hadn’t been Jesse’s, Tanner might’ve

made a move without a second thought.

As if he knew what he was thinking, Damon arched an eyebrow at him, his lip curled into a half sneer.

Fuck it all.
“I’m supposed to tel you to have a session with me. Jesse wanted it that way.”

“Yeah. I’m supposed to let you Dom me. It was Jesse’s dying wish.”

Damon paled, took a step back from Tanner, and then another. “Is this a sick joke?”

“You little fuck.” Damon had Tanner’s shirt bunched in his fists, was slamming him against the office wal hard. “You

sick bastard. You think you can ingratiate yourself to me by using Jesse?”

Tanner ground his teeth together hard and tamped back his anger. He’d known Damon wouldn’t take this wel . If

Tanner had been in the same position, he doubted he would either. “He asked me to wait a year before I came here. He

“How do you know that?” Damon demanded. “Even I don’t know that.”

No, he wouldn’t. The mission was deemed classified—and Jesse’s time of death a closely guarded secret. “I was

with him when he died.”

Damon let out a long, hissing breath and let go of Tanner’s shirt.

“I’m sorry—I didn’t know how else to tel you. Jesse made me promise—”

“He made me promise I’d wait the year. Said you wouldn’t be ready before that. That you’d need to be dragged back

into the land of the living, kicking and screaming. He said to tel you…to use the skul -and-crossbones col ar with the

broken latch.” He spoke fast, stopped to catch his breath at the end. Gauged Damon’s reaction.

The man hadn’t moved a muscle during Tanner’s speech. Simply stared, and Tanner tensed more, wondering if he

was going to have to fight tonight.

Fighting and fucking were definitely two of his favorite things to do, sometimes al in the same night—or hour—or hel ,

the same time, but he had a feeling that he’d be pushing his luck taking on this guy.

He was in way over his head. And he couldn’t remember the last time—if ever—he’d felt that way.

Damon’s features relaxed slightly. He sat back on the top of the desk, folded his arms and stared Tanner up and

down. A hard, assessing stare that was enough to make Tanner hard with desire and anticipation.

He wasn’t sure why the sudden thought of Damon taking him got him hot, but that was short-lived, because he saw the

tension in Damon’s stance, the pain in his eyes. Tanner wanted to apologize, but he wasn’t sure what for. Wanted to tel

Damon that he was scared to fucking death that the Domming would actual y happen—and also scared that it wouldn’t.

He was so fucked up he could barely see straight.

Damon final y spoke. “I wouldn’t touch you. You’re not man enough to handle me.”

The Saver by Edeet Ravel
Shifting Gears (Crossroads Series Book 2) by Riley Hart
Love on the Boardwalk by Christi Barth
Unending Love by Le Veque, Kathryn
Trophy for Eagles by Boyne, Walter J.
Lord Love a Duke by Renee Reynolds
Tats Too by Layce Gardner
Secrets and Lies by H.M. Ward
Where the Birds Hide at Night by Gareth Wiles
Steal the Moon by Lexi Blake