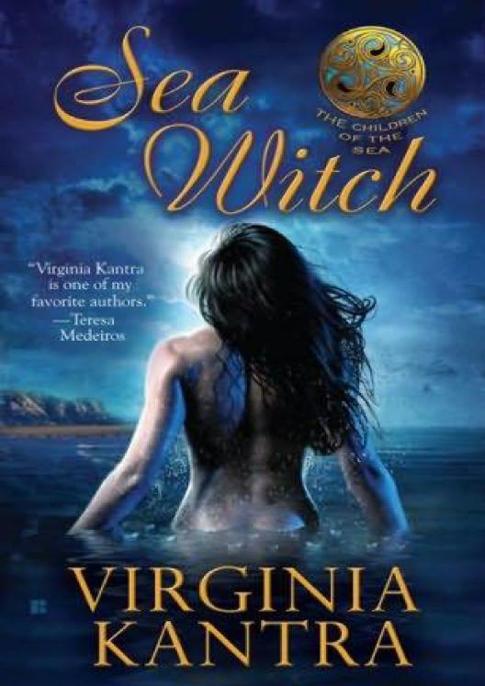 IF SHE DIDN’T HAVE SEX WITH SOMETHING SOON, she

would burst out of her skin.

She plunged through the blue-shot water, driven by a whisper on the

wind, a pulse in her blood that carried her along like a warm current. The

lavender sky was brindled pink and daubed with indigo clouds. On the

beach, fire leaped from the rocks, glowing with the heat of the dying sun.

Her mate was dead. Dead so long ago that the tearing pain, the fresh,

bright welling of fury and grief, had ebbed and healed, leaving only a scar

on her heart. She barely missed him anymore. She did not allow herself to

But she missed sex.

Her craving flayed her, hollowed her from the inside out. Lately

she’d felt as if she were being slowly scraped to a pelt, a shell, lifeless

and empty. She wanted to be touched. She yearned to be filled again, to

The memory quickened her blood.

She rode the waves to shore, drawn by the warmth of the flames and

the heat of the young bodies clustered there. Healthy human bodies, male

Some damn fool had built a fire on the point. Police Chief Caleb

Hunter spotted the glow from the road.

Mainers welcomed most visitors to their shore. But Bruce Whittaker

extend to bonfires on the beach.

Caleb had no particular objection to beach fires, as long as whoever

set the fire used the designated picnic areas or obtained a permit. At the

point, the wind was likely to carry sparks to the trees. The volunteers at

the fire department, fishermen mostly, didn’t like to be pulled out of bed

to deal with somebody else’s carelessness.

the shoulder of the road: a tricked-out Wrangler, a ticket-me-red Firebird,

and a late-model Lexus with New York plates. Two weeks shy of

Memorial Day, and already the island population was swelling with folks

from Away. Caleb didn’t mind. The annual influx of summer people paid

his salary. Besides, compared to Mosul or Sadr City or even Portland

down the coast, World’s End was a walk on the beach. Even at the height

Caleb could have gone back to the Portland PD. Hell, after his

medical discharge from the National Guard, he could have gone

anywhere. Since 9/11, with the call-up of the reserves and the demands of

and overwhelmed. A decorated combat veteran—even one with his left

leg cobbled together with enough screws, plates, and assorted hardware to

The minute Caleb heard old Roy Miller was retiring, he had put in

for the chief’s job on World’s End, struggling upright in his hospital bed

to update his résumé. He didn’t want to make busts or headlines anymore.

without getting shot at. To feel the wind on his face again and smell the

salt in the air.

To drive along a road without the world blowing up around him.

He eased from the vehicle, maneuvering his stiff knee around the

steering wheel. He left his lights on. Going without backup into an

isolated area after dark, he felt a familiar prickle between his shoulder

blades. Sweat slid down his spine.

Get over it
.
You’re on World’s End
.
Nothing ever happens here
.

Which was about all he could handle now.

He crossed the strip of trees, thankful this particular stretch of beach

wasn’t all slippery rock, and stepped silently onto sand.

She came ashore downwind behind an outcrop of rock that reared

from the surrounding beach like the standing stones of Orkney.

Water lapped on sand and shale. An evening breeze caressed her

damp skin, teasing every nerve to quivering life. Her senses strained for

the whiff of smoke, the rumble of male laughter drifting on the wind. Her

Not with cold. With anticipation.

Even in this body, her blood kept her warm. But she knew from past

encounters that her nakedness would be . . . unexpected. She did not want

to raise questions or waste time and energy in explanations.

She had not come ashore to talk.

Desire swelled inside her like a child, weighting her breasts and her

She picked her way around the base of the rock on tender,

unprotected feet. There, clumped like seaweed above the tide line, was

that a . . . blanket? She shook it from the sand—a towel—and tucked it

around her waist, delighting in the bright orange color. A few feet farther

on, in the shadows outside the bonfire, she discovered a gray fleece

garment with long sleeves and some kind of hood. Drab. Very drab. But it

would serve to disguise her. She pulled the garment over her head,

fumbling her arms through the sleeves, and smiled ruefully when the

cuffs flopped over her hands.

The unfamiliar friction of the clothing chafed and excited her. She

slid through twilight, her pulse quick and hot. Still in the shadows, she

paused, her widened gaze sweeping the group of six—seven, eight—figures sprawled or standing in the circle of the firelight. Two females.

Six males. She eyed them avidly.

She sighed. She did not prey on drunks. Or children.

lights from the ridge above the beach. She blinked, momentarily

a shark. They were caught between the rock and the strand, with the light

in their eyes and the sea at their backs. She followed their panicked

glances, squinting toward the tree line.

Silhouetted against the high white beams and dark, narrow tree

Her blood rushed like the ocean in her ears. Her heart pounded. Even

allowing for the distortion of the light, he looked big. Strong. Male. His

silly, constraining clothes only emphasized the breadth and power of his

chest and shoulders, the thick muscles of his legs and arms.

He moved stiffly down the beach, his face in shadow. As he neared

the fire, red light slid greedily over his wide, clear forehead and narrow

nose. His mouth was firm and unsmiling.

Her gaze expanded to take him in. Her pulse kicked up again. She

felt the vibration to the soles of her feet and the tips of her fingers.

This
was a man.

Caleb shook his head and pulled out his ticket book.

Back when he was in high school, you got busted drinking on the

beach, you poured your cans on the sand and maybe endured a lecture

from your parents. Not that his old man had cared what Caleb did. After

about much of anything except his boat, his bottle, and the tides.

Caleb arched an eyebrow. “You found it?”

Which meant he could be charged with furnishing liquor to minors.

He made them put out the fire while he wrote them up: seven

He handed back their drivers’ licenses along with the citations. “You

boys walk the girls home now. Your cars will still be here in the

“It’s too far to walk,” a pretty, sulky brunette complained. “And it’s

Caleb glanced from the last tinge of pink in the sky to the girl.

was a colorectal surgeon from Boston with a house right on the water,

about a mile down the road.

“I’d be happy to call your parents to pick you up,” he offered,

“Screw that,” announced the nineteen-year-old owner of the Jeep.

"If I start giving Breathalyzer tests for OUIs, it’s going to be a long

night,” Caleb said evenly. “Especially when I impound your vehicle.”

Caleb leveled a look at him.

“Come on, Robbie.” The other girl tugged his arm. “We can go to

Caleb watched them gather their gear and stumble across the sand.

“I can’t find my sweatshirt.”

Their voices drifted through the dusk. Caleb waited for them to make

a move toward their cars, but something—his threat to tell their parents,

maybe, or his shiny new shield or his checkpoint glare—had convinced

them to abandon their vehicles for the night.

He dragged his hand over his forehead, dismayed to notice both were

He was fine, damn it.

He stood with the sound of the surf in his ears, breathing in the fresh

salt air, until his skin cooled and his heartbeat slowed. When he couldn’t

feel the twitch between his shoulder blades anymore, he hefted the cooler

and lumbered to the Jeep. His knee shifted and adjusted to take his weight

on the soft sand. He’d passed the 1.5-mile run required by the State of

Maine to prove his fitness for duty. But that had been on a level track, not

struggling to stabilize on uneven ground in the dark.

He stowed the evidence in back, slammed the hatch, and glanced

A woman shone at the water’s edge, wrapped in twilight and a towel.

The sea foamed around her bare, pale feet. Her long, dark hair lifted in

the breeze. Her face was pale and perfect as the moon.

For one second, the sight caught him like a wave smack in the chest,

robbing him of speech. Of breath. Yearning rushed through his soul like

the wind over the water, stirring him to the depths. His hands curled into

fists at his sides.

Not
okay. He throttled back his roaring imagination. She was just a

kid. A girl. An underage girl in an oversize sweatshirt with—his gaze

And he was a cop. Time to think like a cop. Mystery Girl hadn’t

been with the group around the fire. So where had she been hiding?

Caleb stomped back through the trees. The girl stood with her bare

feet planted in the sand, watching him approach. At least he didn’t have

He stopped a few yards away. “Your friends are gone. You missed

She tilted her head, regarding him with large, dark, wide-set eyes.

“They are not my friends.”

“Guess not,” he agreed. “Since they left without you.”

She smiled. Her lips were soft and full, her teeth white and slightly