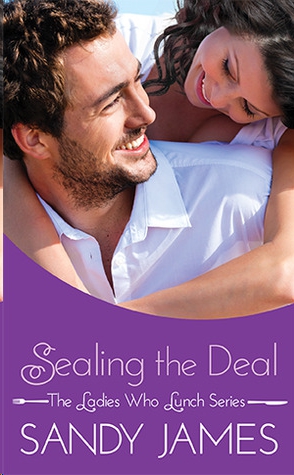 A Preview of the Next Ladies Who Lunch Novel

To my new grandson, John Solomon. You are the light of my life.

As always, I need to thank my agents—Joanna MacKenzie, Danielle Egan-Miller, and Abby Saul. You ladies are amazing!

Thanks to my editor, Latoya Smith, for always making my books so much stronger. You’re such a talented editor!

I’d be lost without the help of my critique partners—Cheryl Brooks, Nan Reinhardt, Leanna Kay, and Sandy Owens. Thanks for all you ladies do for me!

And to my family, friends, and readers for their unending support. Love you!

If one more person told Bethany Rogers how sorry he was that her sister was dead, she might just punch him right in the nose.

She swallowed her irritation. It wasn’t her normal response to stress anyway since she much preferred finding the positive in any situation. Of course, she’d never been through
this
kind of stress before. Perhaps this anger was normal for someone who was grieving.

It wasn’t often a girl lost her only sister. Nothing remotely positive to be found in that.

That would haunt Beth for a good, long while—if not the rest of her life. Even though she kept reminding herself that not talking to Tiffany wasn’t her fault, she couldn’t push the guilt aside.

Her sister had been in a war zone. Communicating with someone overseas wasn’t easy. The time difference alone made it a daunting chore. While the army allowed Skyping, Tiffany had reached out to her big sister only a few times. Their last video chat had been over a month ago when Tiffany had first arrived in Afghanistan.

And now Tiffany was dead.

Beth went to the chapel early, wanting a moment alone with her sister, only to be denied a private farewell. An army officer stood guard over the flag-draped coffin. While the family had been offered a chance to view the remains, the officer who’d escorted Tiffany to Princeville, Illinois, cautioned them against doing so. The suicide bomber had done his job well, savagely destroying the three people at the guard post that fateful morning.

Sick at heart, she turned to head back up the aisle and nearly collided with Danielle Bradshaw. Her best friend was dressed in a perfect little black dress, wore very little makeup, and had pulled her long, blond hair into a tight bun.

“Hey.” Beth swallowed hard to keep the threatening tears—the ones she wanted to shed in private—at bay.

“Hey,” Dani replied, her tone wary. She studied Beth with her crystal-blue eyes before understanding dawned. Then she opened her arms wide.

Without a moment of hesitation, Beth threw herself into Dani’s embrace. Beth was as short as Dani was tall and found her cheek pressed against her friend’s shoulder. “Thanks for coming.”

“Shit, Beth. Where else did you think I’d be?” came Dani’s characteristically acerbic reply.

Having narrowed her vision to focus on her best friend, Beth hadn’t realized the rest of the Ladies Who Lunch had arrived as well. Mallory Carpenter and Juliana Wilson came forward to sandwich Beth and Dani between them, a group embrace of four women who needed each other’s friendship in a way most people might never understand.

That bond had been formed years ago as the four of them shared their lunch period when they’d all been teaching at Stephen Douglas High School. As time passed, they’d learned to lean on one another through thick and thin. Mallory’s breast cancer. Juliana’s choice to leave teaching and start a new career.

And now Beth facing the loss of her little sister.

They simply held on to each other for a few precious moments, crying softly. Then one by one, they eased back.

Mallory sniffed and wiped the tears from her cheeks with a tissue she’d wadded in her palm. Her light brown hair had recently been cut into a short, sassy style. After she’d lost her hair to chemotherapy, it had taken her a long time to allow anyone to put a pair of scissors to it. Now that her breast cancer was four years in the past, she’d finally decided to cut it the way she wanted instead of focusing on growing it out. Her dark brown dress matched her eyes. Although those eyes were red-rimmed, they still reflected Mallory’s boundless kindness.

Juliana was stoic. Dressed in a navy suit, her long red hair loose around her shoulders, she looked the part of the successful Realtor she’d become. But beneath that rough exterior beat a heart full of compassion.

“Thank you all for coming.” Beth gratefully accepted a new tissue from Danielle.

“Where else would we be when you need us?” Mallory asked with a sympathetic smile.

Beth shrugged. “It’s about the only thing I can say without getting choked up. I sound like a broken record.”

Mallory spared a quick glance over her shoulder. “The guys came, too.”

Hanging back a few feet were Ben Carpenter and Connor Wilson. Since Connor wasn’t holding two toddlers, Beth assumed the Wilsons had left their twin boys back in Cloverleaf with a babysitter. She tossed each man a grateful smile. They nodded in return.

Dani took her hand and gave it a quick squeeze. “How are you holding up, hon?”

“They brought the baby?” Dani whispered.

Crossing her arms around her middle, Beth tried to ward off the chill that seemed to have settled in her bones. “They don’t know anyone here anymore. Neither do I for that matter. We didn’t want a stranger to babysit.”

“Then why’s the service here and not Cloverleaf?” Juliana asked.

“Tiffany’s friends are all here. Princeville was home to her.”

“As usual,” Juliana added before looking a bit contrite.

The Ladies weren’t overly fond of Beth’s mother. They thought she’d always been too critical of Beth, which meant they blamed Carol for Beth’s tendency to feel as though she wasn’t good enough. Or pretty enough. Or thin enough.

Maybe they had a point.

“She’s probably just tired. Emma was really fussy last night,” Beth said, making yet another excuse for her mom. “I finally took her from Mom and slept in the recliner with Emma lying on my chest.”

“Mom’s good with her, too. You know, they’ll have Emma down there until Tiffany’s tour of duty ends and—” Beth had to stop and close her eyes. Tiffany’s deployment had ended the day she died.

Will I ever stop thinking of her in the present tense?

That was the same question Beth had been asking herself—especially in the wee hours of the morning as she’d cradled her niece against her. Her parents’ condo was smack dab in the middle of a community of fifty-five and overs. It was one thing to keep their granddaughter for a tour of duty. Even then, Beth was going to have the baby as soon as summer break began, because Carol didn’t want “to raise another kid.” Loving children, especially her niece, Beth had readily volunteered to take Emma for at least June and July, longer if she could arrange good child care when school began.

Before Beth could ponder that again, her mother came over. “Can you take Emma for the service? My back’s killing me. That’s what I get for being nice.”

Emma reached for Beth before she could even answer.

Settling Emma on her hip, Beth kissed her cheek.

With an enormous yawn, Emma put her thumb in her mouth and rested her head against Beth’s shoulder. As if none of the dozens of people were in the church, Emma fell asleep moments later.

There was no worry about Emma fussing through the service. The child was her mother’s opposite. While Tiffany always craved being the center of attention, Emma was calm and oddly quiet for her age. Tiffany had been a reed-thin blonde with blue eyes, while Emma shared Bethany’s curly brown hair, brown eyes, and chubby cheeks. Beth wanted children of her own one day, lots of children, and Emma was exactly what she thought a future daughter would look like.

The more Beth thought about it, the more she realized Emma favored her aunt rather than her mother in more than looks. Tiffany and Beth had acted nothing like sisters. Tiffany’s wildness came in direct contrast to the tight rein Beth kept on her life. Perhaps their different temperaments were from being the older versus younger sibling.

Beth’s pondering was interrupted as the minister stepped into the chapel through the side door. She nodded at her friends as they took their seats in the second row. Then she moved to where her parents waited on the front pew. Before she could sit, her gaze was drawn to the back of the chapel.

A tall, handsome man with short, cropped dark hair came inside and looked around as though he felt completely out of place.

Her heart began to pound. Robert Ashford had arrived. She gave him a small wave, wanting—
needing
—him to come to her. Perhaps that need stemmed from her grief, causing her secret infatuation with the man to intensify. She simply didn’t have the time or the energy to add her crush on Robert to her list of things to think about. Emotionally overwrought at losing her baby sister, she couldn’t examine her feelings too closely.

About the time she feared he’d given up finding her in the crowd, his brown eyes caught hers. With an insistent flip of her wrist, she begged him to join her. Even though the Ladies and their spouses were only a row behind, she wanted Robert at her side, especially since her parents had seated themselves several feet farther down the pew.

The overwhelming desire to lean on him couldn’t be shaken. Robert was her friend, her former colleague—technically her boss as well. But none of those roles explained the keen yearning to have him near.

He strode up the aisle, not even stopping to acknowledge their friends.

“Hi, B. I’m s-sorry about your sister.” The way he shifted on his feet spoke of his discomfort. That, and he kept tugging at his tie as though it were too tight.

Come to think of it, she’d never even seen him in a suit.

“Thanks for coming,” she said.

“I was, you know, worried about you.” His gaze drifted to the full second pew. “Should’ve known you wouldn’t need me.”

“But I do!” She didn’t realize she’d shouted until Emma stirred and several people gaped at her. Beth lowered her voice. “Can you sit by me? Please?” Why did she suddenly feel as awkward as a girl talking to her first crush?

Since the minister was clearing his throat, she took a seat, settling Emma on her lap and letting her rest against her shoulder again. Thankfully, the baby went right back to sleep.

Robert took his place next to her and, as if it were the most natural thing in the world, he draped his arm behind her, resting it on the back of the pew. A few minutes later, after the minister started talking about how Tiffany had given her life in service to her country, Robert’s arm moved to rest on Beth’s shoulders.