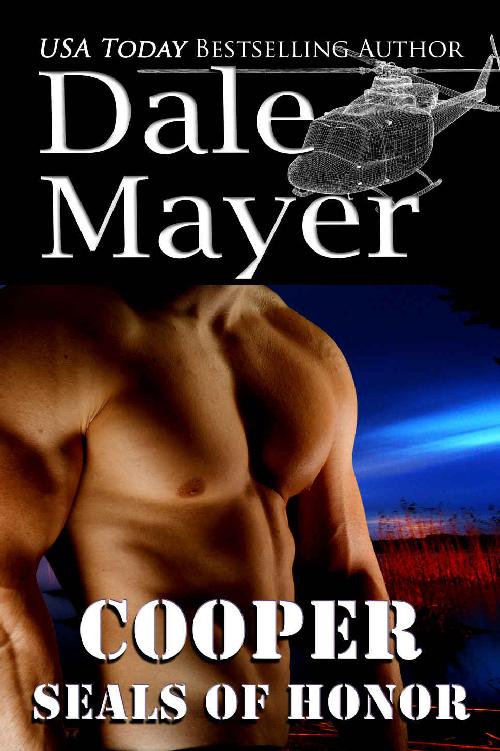 The doctor saved Cooper’s life and his sanity – but she stole his heart.

Being a SEAL means everything to Cooper, so when the doctor who saved his life is kidnapped, he’s the first to volunteer for the mission.

Dr. Sasha Childs has devoted her life to helping others – until she finds out her husband is helping himself to her best friend. Disillusioned, she volunteers her medical skills to a Syrian refugee camp crying out for medical aid.

Cooper has his hands full rescuing Sasha from foreign hands the first time, but when the war comes home, it becomes damn near impossible to keep her safe a second time.

He’s been blessed with one miracle in his life, now he needs a second one – before the woman he loves becomes a casualty of war…

Sign up to be notified of all Dale’s releases
here
!

DOWNLOAD
a
complimentary
copy of TUESDAY’S CHILD? Just tell me where to
send it
!

L
ike hell he
was going to stay behind.

Cooper Braxton slipped into the room and took a seat at the back. He’d come as soon as he’d heard. He didn’t know the details but he was going on this mission. If he could. And he needed to if the rumors were true.

“Listen up, everyone. We have an unusual situation. Turkey has requested our assistance. Because we’re in place, this one is ours.”

Right. They were doing specialized training with the Turkish military who were facing a unique situation with the millions of refugees crossing their borders.

“We have intel that a medical team working one of the smaller refugee camps in Turkey is being targeted.” He looked at the men. “Why them, we don’t know for sure. But most likely because one of the two medical clinics are staffed with US citizens.”

Being one of the good guys trying to help those less fortunate was no guarantee of being safe. After a joint military push to move the Islamic terrorist troops out of one of their strongholds a few days ago, they knew retaliation was a given.

But doctors and nurses trying to help those displaced?

“Some of the team members are retired military – one, Dr. Landry, a retired SEAL – adding to the attraction.”

There were several angry murmurs in the room. Cooper took a quick glance around. He knew them all. All good men. All men to have your back.

But he wasn’t going to trust Dr. Sasha Childs’ life to anyone but himself. Not after all she’d done for him.

The orders came hard and fast. They knew what they were doing. No one needed to be told twice. An eight-man team was leaving within two hours and he wanted in on it.

The men broke up and headed out.

“Cooper, hold a moment, will you,” Levi called out to him.

Cooper nodded. Levi was a conundrum. One of the best SEALs here. He’d been on some of the worst missions and always on the most secretive. Even here amongst the elites there were layers with Levi as one of the most unknown and always one of the most dangerous. No one really knew what he did, but he’d disappear for days and when he came back it was as if the lines of his face had been carved a little deeper. There were others in his group. But no one knew who.

Cooper walked over, his mind trying to formulate what the hell he could say that would get him on this mission.

Cooper’s eyes shot up in surprise. “Good. Why?”

“Apparently you know several of the doctors, personally.”

Cooper winced. “You could have said because I’m the best bomb man you’ve got.”

Levi smiled. “You are the best EOD man here. But I can’t tell you that so this works as well.”

“Has a move been made against the medical team yet? Or does this remain at the threat level? Do we know if the doctors have been put on alert?”

“The Turkish military is on it,” Levi said. “They have doubled security, but there are over fifteen thousand people at the camp. And it’s one of the smallest here. The medical team
has
been warned.”

“And they shrugged it off, of course.” Cooper knew that both Dr. Landry and Dr. Sasha would.

“A little too well and yet not well enough.”

Levi studied him for a long moment then gave a clipped nod. “Understood.”

And he probably did. Levi saw…everything.

“We can’t let them be taken.” He kept his tone cool, controlled.

“We’re actually sending you to escort them home.”

Cooper narrowed his gaze. “A joint task, eight of our men – to escort a group of American doctors home?” He shook his head. “No. There’s more to it than that.”

A whisper of a smile crossed Levi’s face. “It just came in a few minutes ago. One of the doctors has gone missing. As of forty-five minutes ago. She was seen at the clinic with a full roster of pregnant women waiting for her. Thirty minutes later she was nowhere to be found. No one saw her leave and no one has heard from her since.”

Cooper’s breath rushed out of his chest. “And the others?”

“They are accounted for at last check in. A search is underway for Dr. Sasha.”

Cooper nodded but his feet were already taking him out of the room.

“Cooper,” Levi called out. “Don’t do anything stupid.”

“Never,” he called back. “She saved me. I’m not going to rest until I have returned the favor.”

And if anyone suspected he had feelings for the sprite who had more dynamo and energy than any person he’d ever met, well, he had no plans to confirm it.

And that made her off limits.

And didn’t change his loyalty one bit.

S
asha leaned back
on her heels, then slowly straightened, wincing as her back screamed. She smiled down at the young woman in the very early stages of labor. “Everything looks good, Yalta,” she said in a cheerful voice, knowing the woman didn’t understand English well but would recognize her tone. It was hard to keep the worry back though. The woman had an extremely narrow pelvis and could have a bad time of it. “But we need to get you to the clinic where we can keep an eye on you.”

A series of musical voices rose above her as the driver translated her words to the men and women filling the small room. The accommodations were tight and there was barely enough room to give the woman any privacy.

From the dark looks and deep tones of those muttering around her, she figured it didn’t matter what she said, her suggestion wasn’t going to be allowed. In an ideal situation the young mother-to-be should have been moved to the hospital. But the refugee camp didn’t have its own hospital and the closest one was overcrowded, short staffed. If Mother Nature wanted to, she could make things very difficult for this young woman. Therefore she needed to be where Sasha or one of the other doctors was close to keep an eye on her.

She didn’t have much room at the clinic but instinct said this delivery wasn’t going to be smooth or easy. She picked up her bag but that caused another uproar. She turned to the driver and asked, “What’s the problem?”

“They want you to stay,” Jamel said with a shrug. “They say you aren’t allowed to leave.”

With a sharp look she responded in a cool voice. “Yalta needs to be at the medical center. I have dozens of other people who need my assistance.”

As she turned to walk out of the small shelter several men stepped in front of her. She pulled her radio out and sent a message back to the clinic. “I’m at Yalta’s place. She has just started labor. I’m being
asked
to stay,” but she paid careful attention to the word asked. There was no asking being done here. They were going to force her to stay whether she liked it or not. The young father-to-be sat beside his wife and didn’t look ready to let Yalta leave. Sasha said, “Requesting assistance.”

“Understood,” cracked the voice on the other end of her radio. And she hoped they did. She wasn’t into strong arming her way out of here, and if someone got hurt in the process, that wasn’t going to help anyone.