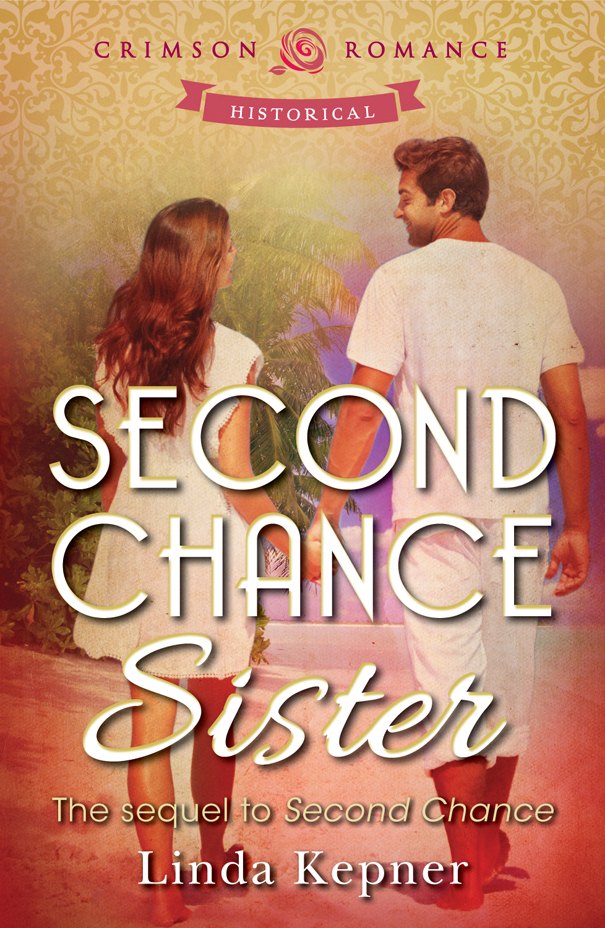 This edition published by Crimson Romance

The author wishes to thank the NH Chapter of the Romance Writers Association for encouragement, good-fellowship, and support. Many thanks also to editor Jennifer Lawler and the talented staff of Crimson Romance Publishing, and also the Ladies In Red, the network of Crimson Romance authors.

Information about Ile de la Reunion is derived mainly from the Internet, French school sites, and tour books, with some back-dating to 1969. Much of Bishou’s academic knowledge and experience is derived from my own experiences at Keene State College and the unique World Studies program of Eisenhower College.

Paradise
, thought Bishou Howard, as Louis drove the little Mercedes through the tropical jungle roads of Réunion Island. Like any
réunionnais
duo, they had spent their day picnicking. And talking. Bishou smiled and thought,
a loaf of bread, a jug of wine, and thou by my side.

Everyone always drove slowly out here. Louis’s dark eyes glanced away from the grassy road — there was no danger of a crash at this speed — and he inquired, “Did hearing me say that I love you as much as I love this island make you smile like that?”

Louis laughed.
I’ve never heard him laugh like this
, Bishou thought.
He really is happy.

They drove back into Saint-Denis. Bishou realized with surprise that Louis had driven onto Rue Marché, Market Street, and had, in fact, pulled up in front of the jewelers. She was half-asleep, and had not paid attention to directions.

“Louis, this is not the pension,” she protested.

“I know. But we have other things we must do,” he replied. “
Viens
.” Come. Wordlessly, she accompanied him into the jewelry store.

It was late in the day, almost sunset, but the stores here stayed open longer because of the early-afternoon siesta. The store manager, an elegant polished Frenchman, almost wrung his hands with delight when he saw his customers. “Why, Monsieur Dessant, welcome! What may we do for you today?”

“Bonjour, Monsieur Charron,” said Louis. “We had discussed a necklace?”

Necklace? She blinked. Monsieur Charron, however, understood at once.

“I inquired, Monsieur. It is more an American custom than a French one, but I was able to order what you wanted.” From a display case, he removed a piece, and set it on the counter.

Bishou stared. Strung upon a short gold chain was an inch-long gold-and-diamond pendant, showing three stripes — the chevrons of a doctoral gown. “Louis,” she said softly, stunned. A doctoral charm, to celebrate the fact that she was the third-ever female to earn a Ph.D. at East Virginia University! She turned the charm over, and saw the tiny “8/16/69,” the date written American-style, commemorating that victory, a little over a month ago.

Louis smiled, very pleased. “Let us see how it looks, shall we?” The jeweler detached it from its stand and gave it to Louis. Bishou stood still while he fastened it around her neck. She stared at her reflection in the mirror the jeweler held before her. Louis murmured in her ear, “It looks quite right.”

“Now for the rings.”

Bishou shook her head and tried to chase away the numbness. “I am not — I don’t think I am quite the kind of woman … I mean, diamonds.”

“I thought of that. Also, the ring you gave me Thursday night, your college ring, has a blue stone. How do you feel about sapphires?”

“I — ” She gathered her thoughts. “Whatever you want,
mon mari
.” My husband. The first time she called him that. She saw the warmth in his smile.

The rest of the visit was a blur. The men found a solitary sapphire, in a white-gold band, and fitted it to her finger. The manager sized them for wedding bands, and came up with simple bands that matched the engagement ring. These he placed in a box, which Louis tucked away in his pocket. The bands were not engraved; that could wait for another day. Weddings took place quickly on Réunion Island, Louis had told her. They were dawdling by réunionnais standards. She had said yes the night before last, Thursday night, and they would be married in eight days, on Friday. If they could overcome some formidable obstacles between now and then.

The men transacted their business while she waited, silent and numb. Then Louis smilingly escorted her out of the shop, and back into the little white car. He got in, and put an arm around her shoulder. He saw that she still looked numb, chuckled, and kissed her. “What color is the stone of your ring?” he challenged her.

Louis helped Bishou gather all her packages out of the trunk when they reached the pension. “Remember, church, nine o’clock. I will pick you up at a quarter to nine,” Louis said.

“I will remember,” she promised. “And thank you.”

He opened the pension door for her, kissed her despite her arms full of packages, and drew the door shut behind her. She heard the engine start as he drove away.

Eliane, the elder of the two sisters who ran the Pension Étoile, smiled at her armload. Joseph, their Creole porter, came forward, grinning, and relieved her of some of her burden. “Well, mademoiselle! You have certainly been busy with your refund,” Eliane teased.

“I have so much to do, and so little time in which to do it,” said Bishou.

“Certainly, certainly.” Eliane sounded as excited as she was. “I had meant to ask before — do you plan to be married here, out of the pension?”

“Do you mean — where I get dressed before the ceremony, and so on?” At Eliane’s nod, Bishou replied, “I presume so. I’m hoping these things all fall together as we get closer.”

“Is it a church wedding?”

“Well,” Bishou replied, “that is tomorrow’s problem.” She and Joseph made their way up the stairs.

She rummaged around her purse for a tip for Joseph, and said, “Thank you for all your help,
mon ami
. I think you mentioned me to your friends and family, too, and they have helped me as well.”

“Ah,” said Joseph, pocketing the handful of coins she gave him, “we are all
réunionnaises
together.”

“
Bien dit
. But I am
étrangère
and grateful for your assistance.”

The kindly Creole smiled, touched his cap, and left.

Bishou closed the door, unbagged things, and hung up clothes on her few available hangers. She slipped on the elegant shoes Louis purchased for some walking practice around the room. She slid out her Sunday hat, a little headpiece with netting attached, and fluffed it out; it had got squished in the backpack. Her white print dress would do for church. She ought to have gloves, and white sandals. Ah, well. Later.

Bishou sat on the bed, pulled out her portfolio, and began an outline of her expository lecture for Wednesday. Wednesday problems first, Friday problems later. Still full of bread and cheese and wine, Bishou decided to forego supper.

She was beginning to doze off when she heard a tap-tap at the door. “
Entrez
!”

Bishou smiled and stood up. “They are not my style, but Louis likes them. What do you think?”

“They’re lovely! We’re having a little evening meal, downstairs. Come. Eliane said you looked so tired, I knew you wouldn’t get yourself something to eat. Come,” Marie persuaded. Bishou allowed herself to be herded downstairs, into their little living quarters at the back.

Of course she showed them the engagement ring. They oohed and aahed over it, even though it was the doctorate charm that meant so much more to Bishou.

“I wondered,” said Eliane, in a tentative tone of voice, “if there might be some problem with Monsieur Dessant being married in a church.”

“I don’t know, either,” Bishou admitted. “He is going to ask tomorrow.”

“Well, we will be at the nine o’clock Mass as well,” said Eliane decisively, “and we will pray for the best for you.”

“There speaks an old-fashioned woman,” said Marie, surprised. “I thought you were one of these ‘new’ women,
mademoiselle
, with your college professorship and all!”

“I have a right to choose some of both worlds, don’t I?” Bishou asked. “Isn’t that what this ‘women’s liberation’ is all about?”

“Well, of course, Bishou, but not to break your back under the additional burden.”

Bishou woke up in plenty of time to dress for church. She came downstairs to an empty lobby, and realized the ladies were dressing, too. There would be no breakfast until they returned from communion. Bishou slipped out the front door, and waited for Louis.

He pulled up promptly at a quarter to nine. He opened the door for her, then returned to his seat. “
Très jolie
. I like that little hat.”

He pulled out and drove to Église de Saint-Denis, a beautiful stone-and-stucco Catholic church in another part of the city. It had spacious grounds: a side yard, a vestry, a short wall around it. Louis parked, as was his custom, and they joined others entering the church just as the bells pealed. They blessed themselves, and took a side aisle seat half-way back. As Louis knelt to pray, Bishou kept him company, and took a seat as he did.

Bishou remained silent but observant. The white French population tended toward the front of the church, the dark Creole population to the rear. They were, so to speak, at the rear of the church. It was a fairly large church, and well-populated. But Louis spoke to no one, and kept to himself. There were only one or two people in nearby pews, strangers.

The procession and music were familiar to her. The procession passed down their side aisle, and up the center. Bishou thought the priest, a Creole, glanced at them, but she might have imagined it. The Mass progressed like all Masses had done for centuries. There was silence between herself and Louis. Père Reynaud had a very gentle voice, although she could hear him well enough. His sermon was merely an expository on this week’s gospel, not particularly inspiring. She did not take communion because Louis did not. After the recessional, she waited for Louis to leave. However, he remained in his seat.

When the church was almost empty, Louis stood. “Wait here,” he told her, and left for the front, in the direction the Père had gone.

She sat and waited, letting the quiet of the empty church soak in. In a little while, she heard footsteps. Both Louis and the Père were there. Bishou stood.

“Father, permit me to introduce my fiancée, Bishou Howard.”

“
Bonjour
, my daughter, and welcome.” The priest looked a little surprised; apparently, Louis was dropping a brick on him.