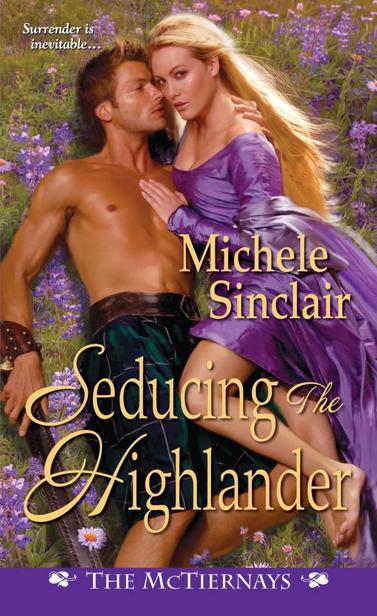 TAKEN BY THE HIGHLANDER
With Meriel’s wrist still in Craig’s grasp, he pulled her roughly to him. His arms tightened, threatening to crush her body against his hard strength. His blue eyes were intensely bright, and danger radiated from him like an aura. Meriel was far from afraid. She wanted this. She needed this.
“Let go of me,” she whispered.
“Why? Isn’t this what you have been wanting? So much that you are willing to torment another man to provoke me into action?”
“I don’t know what you are talking about.”
“Stop, Meriel. It’s time for the truth.” But before she could answer, with his free hand Craig buried his fingers in her hair, pulled her mouth to his, and kissed her. . . .
Books by Michele Sinclair
THE HIGHLANDER’S BRIDE
TO WED A HIGHLANDER
DESIRING THE HIGHLANDER
THE CHRISTMAS KNIGHT
TEMPTING THE HIGHLANDER
A WOMAN MADE FOR PLEASURE
SEDUCING THE HIGHLANDER
HIGHLAND HUNGER
(with Hannah Howell and Jackie Ivie)
Published by Kensington Publishing Corporation
S
educing
The
H
ighlander
T
HE
M
C
T
IERNAYS
Michele Sinclair

The Empress of Mars by Kage Baker
Raven Flight by Juliet Marillier
Tur: An Elsker Saga Novella (The Elsker Saga) by S.T. Bende
The Garden Path by Kitty Burns Florey
Dark King Of The North (Book 3) by Ty Johnston
The Rocker Who Wants Me (The Rocker... Series) by Terri Anne Browning
A Harem of One [The Moreland Brothers 3] (Siren Publishing Allure) by Jennifer Willows
Tales of the Out & the Gone by Imamu Amiri Baraka
The Scream of the Butterfly by Jakob Melander
Terminal Man by Michael Crichton