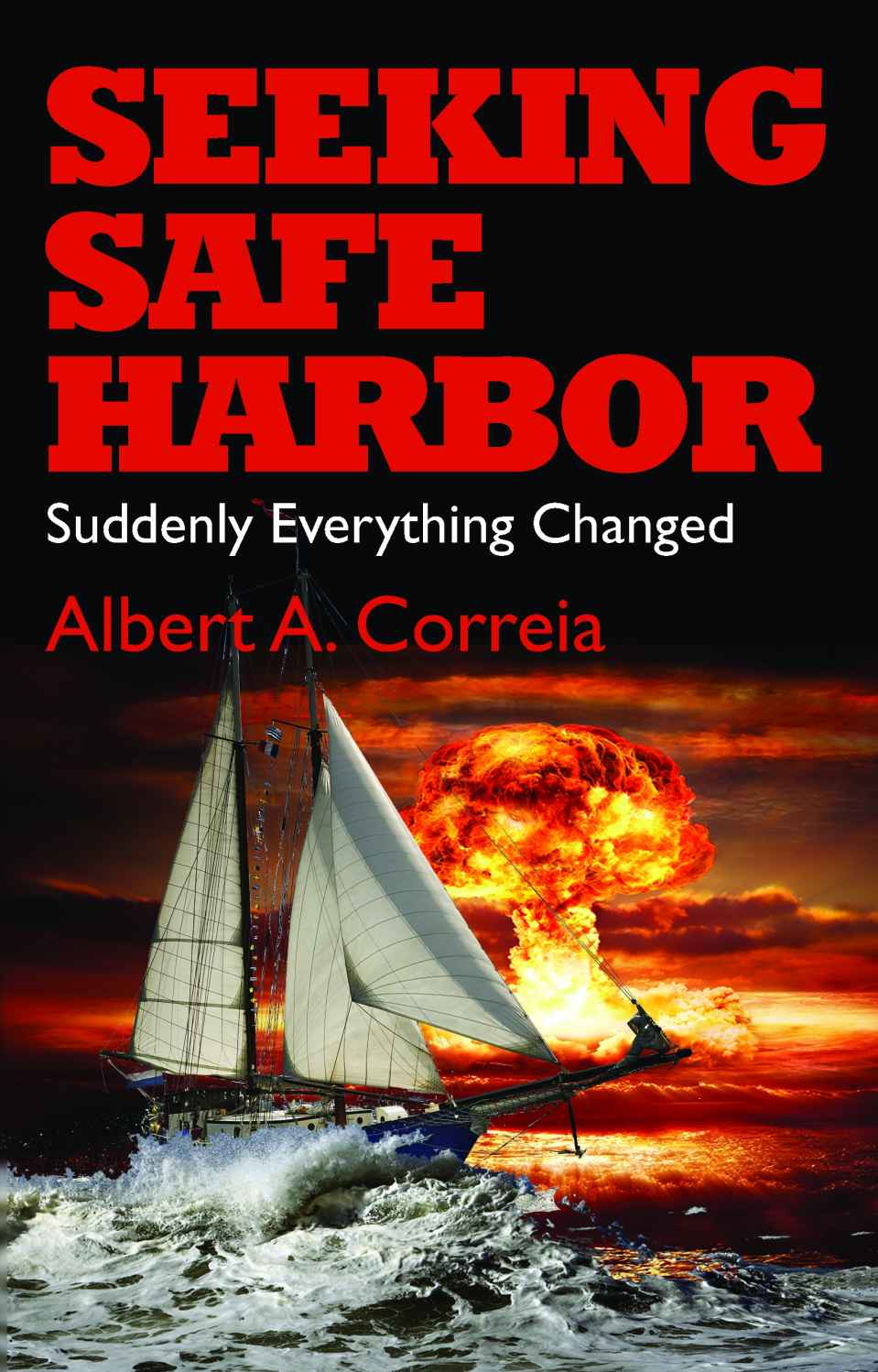 Please visit
www.KamelPress.com/Correia
to see more from this author!

Visit us at
www.KamelPress.com
to see more great books!

This book is a work of fiction. Names, characters, places, and incidents are the products of the author’s imagination or are used fictitiously. Any resemblance to actual events, locales, or persons, living or dead, is coincidental. All rights reserved. No part of this book may be reproduced in any form or by any electronic or mechanical means without permission from the author.

This book is dedicated
to
my children,
to my step children,
and to my grandchildren,
those now alive and all those to come.

They are the reason the future is so important.

Z
ACH had felt uneasy for over a week, even before they left the island, and the large blip on the radar that was bearing down on them did nothing to ease his concern. Why would a big ship change course to go after a forty-one foot sailboat at two-thirty in the morning? Was it a pirate? Pirates were better known to work the South China Sea and the Indian Ocean, but there were some here in the Pacific, too.

Whatever was on their tail, though, looked too big to be a pirate. The radar blip was huge. He looked back again but still saw nothing. The weather was calm and the water’s surface almost flat, which was why they were motoring instead of sailing, but a heavy layer of clouds prevented light from the moon or stars to sneak through to lighten the sky around them.

Whoever was behind them wasn’t using running lights, which concerned him even more. Anybody not using running lights out here in the middle of the ocean had to be up to no good. His own lights were on, so whoever was navigating the big ship could see them, and a ship that big had to have radar; they had to see the small boat’s little blip. In fact, whoever it was had changed from a course that was parallel, but several hundred yards to their port, to a course that put them directly behind the sailboat. That had to be intentional.

Watching the radar, he estimated the big ship’s speed at sixteen or seventeen knots, more than double the rate the sailboat was motoring. The monster ship was catching up quickly. He wished he had the night vision goggles he kept by the charts in a drawer in the salon, but he couldn’t take the time to get them now.

Zach’s next look at the radar brought a worried, “geez” from his lips. The blip was almost on them, and he saw no evidence it was veering off its collision course. He could now hear the rumble of engines, and when he looked back, he could see a massive object looming near that was even darker than the black night.

He didn’t have time to warn Stacey and the kids; he had to act now. Because the huge thing behind them was slightly off to his port side, he cranked the wheel hard to starboard, gunning his single sixty horsepower diesel to full speed. The forty-one foot ketch lurched sharply to the right, moving as fast as a small diesel can move a full keel, seventeen-ton craft through salt water.

Within moments, he could feel the boat rising and their speed increasing as a massive wall of water shoved them out of the way. Holding the wheel as tight as he could, to try to keep control of the vessel, he chanced a look back and saw the side of a massive ship charge by, its thick steel hull not missing them by more than ten yards. He’d never seen anything that big at sea. It was like a skyscraper, and it displaced vast volumes of water.

The initial phase of the wake from its bow cutting through the water caused a wave thirty feet high. The sailboat, which was no more than a toy by comparison to the huge ship, was atop it. The action of thousands of gallons of water was twisting the small boat at will, turning the bow even further to starboard.

He knew that if he let it, the wave would roll them and capsize the boat. Still holding the wheel as tightly as he could, he strained to turn it to port. He used every bit of his strength, but it wouldn’t turn. He moved off to the side and pushed hard against the wheel, using every ounce of his weight and every muscle in his legs, his back, and his arms to leverage it ahead. It seemed like an eternity, although it was just seconds, and the wheel finally began to turn.

He got back in position behind the wheel and continued turning to port. The bow slowly turned left as the boat slipped down the front side of the wave. It was diving, but almost back on course when the bow hit the ocean’s more normal, flatter, surface. The bowsprit dug into the sea and, for a moment, it seemed like they were going to dive deep into the water. As the wave passed, the stern dropped and the bow came up, water gushing in all directions from the freed bowsprit. The boat bobbed like a top dropped from above into a bathtub, but the now relatively calm waters let it settle a little. A secondary wave of the big ship’s wake hit them, but this time it only rocked the boat a little.

Zach reset to his original course. He would be following the big ship now, but he had no choice. The GPS wasn’t working, and he didn’t know celestial navigation. He’d set his course for the big island of Hawaii when they left the little island they’d been staying on, and he didn’t dare change course. Any slight deviation and they could miss the Hawaiian Island chain entirely.

“We were almost run down,” Zach told her. He pointed forward. Algae, disturbed by the big ships props, glowed in its wake. That was all they could see ahead. Their boat was still rocking from the huge ship’s wake, even though the cause of the disturbance was now hundreds of yards ahead of them.

“It felt like we were being knocked down,” Glen said.

“We almost were,” his father said. “There’s a big ship up there, and it came through like it was trying to run us down. In truth, a knock down would have been a lot better than what they seemed to have in mind.”

“Why would someone do that?” asked Denise.

“I have no idea,” Zach admitted.

“What’s going on, Zach?” his wife asked again, this time with the sound of distant worry in her voice. “Everything seems out of kilter lately, like nothing is going right and there’s nothing we can do about it.”

“We can’t jump to conclusions,” Stacey said. “And how would that explain a ship trying to run us down?”

“I don’t know,” Glen said, “but the last thing we heard on the radio before it went on the blink was the news that North Korea was planning to attack South Korea and would nuke the U.S. if we interfered.”

“They’ve been saying that for fifty years,” Zach said, “and nothing has ever happened, except that we let up a little on our sanctions each time. That’s what they’re after again.”

“No,” Zach replied calmly, “but we were never on an uninhabited island when we heard it before. Anything could go out of whack out here, and we’d never know what caused it.”

“Was the ship that tried to hit us from North Korea?” Denise asked. “Or China?”

Stacey studied him. “You say that like maybe you did see something.”

“Not really. As I said, it was too dark to make out much.”

“There’s a big difference between ‘not much’ and ‘nothing.’ What did you see?”

“Well, it looked like there was a flight deck up above the hull, but that can’t be.”

“A flight deck,” Denise said. “Isn’t that what aircraft carriers have, like the one we saw in San Diego before we left?”

“Which is why it can’t be,” he reasoned. “There’s no aircraft carrier around this part of the Pacific, and if there were, it would almost have to be American. And no American Navy ship, especially a gigantic aircraft carrier, would try to run some strange boat down. Look, it was dark, and my eye just caught a glimpse of something, and, you know, it was like a quick impression. I’ve seen a ship like that before, the last time was just a week ago, so when I saw something that reminded me of it, my mind interpreted. There’s no substantiation for what is obviously a wild, and wrong, conclusion. Happens all the time.”

Come by Becca Jameson
Family Farm by Palmer, Fiona
Take This Man by Brando Skyhorse
Little White Lies by Lesley Lokko
Can We Still Be Friends by Alexandra Shulman
Hurricane Days by Renee J. Lukas
Past Due by Catherine Winchester
A Rogue for All Seasons (Weston Family) by Lindsey, Sara
Straight Up and Dirty: A Memoir by Stephanie Klein
Thornbear (Book 1) by MIchael G. Manning