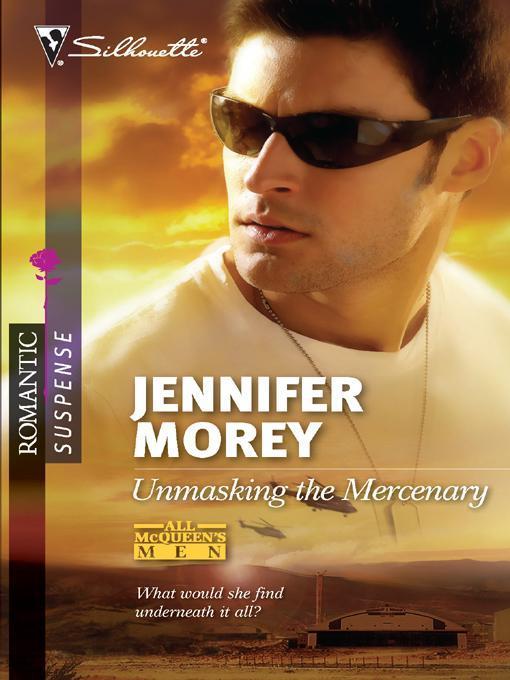 “You should find a job that’s not so dangerous,” Rem remarked.

“What I do is none of your business. What do you need from Ammar?” Haley repeated.

“Answer me,” she insisted.

“Why does someone as fragile as you come to dangerous countries and chase terrorists?” Rem asked.

“Is Ammar a terrorist?”

He just looked at her.

“Is he Hezbollah?” she asked.

“What do you think?”

So Ammar was a Hezbollah terrorist. Nothing surprising there. “I’m not fragile,” she told him.

He pushed his chair back and stood. Moving with deliberate slowness, he came to stand beside her chair. She strained her neck to look up at him.

“No?” He reached to brush some hair behind her shoulder.

Cullen McQueen’s secret counterterror organization, TES, is bigger and stronger than ever in the third installment of the ALL M
C
QUEEN’S MEN miniseries,
Unmasking the Mercenary.

I was after something a little different with this one. I wanted a strong heroine with a dark past to capture the heart of Rem D’Evereux, Mr. Badness incarnate. With a rough childhood that led him down the wrong path for too many years, he has trouble connecting with his heroic side. But then he meets Haley Engen, an ex-POW who’s determined to win the battle against her own inner demons. The two have a common bond and make each other grow.

Writing Rem as a dark and dangerous hero with a seriously questionable résumé—while still retaining his heroism—was a challenge. But it was a rewarding one. He isn’t TES material. But he could be. When bad is really good, a little dose of Nietzsche goes nicely with a love story like this one. I hope you agree!

Blackout at Christmas
#1583
“Kiss Me on Christmas”

has been dreaming up stories since she fell in love with
The Black Stallion
by Walter Farley. With a BS in geology from Colorado State University, she is associate project manager for the spacecraft segment of a satellite imagery and information company. She has received several awards for her writing—one that led to the publication of her debut novel,
The Secret Soldier
—and she is a 2009 two-time RITA
®
Award nominee and Best First Book Golden Quill winner. She lives in Denver, Colorado, with her new man and their pet store: three dogs—Maddie, Dug and Booger—and plenty of fish. She loves to hear from readers. You can visit her Web site at www.jennifermorey.com.

To Buddy Mizner, for never giving up on me while I dated less deserving men, and for making me write when all I wanted to do was be with him.
May I always “wreck you.” I’m all yours.

As always, to my family and friends, and my critique partners—Susan LeDoux, Laura Leonard, Sandra Kerns, Annette Elton and Julie Stevens.

Wish she was here to see this!

“Y
ou getting this?”

Haley Engen looked up from the intel file to see the monitor on her laptop computer. Her partner, Travis Todd, had a video camera disguised as a button on his shirt. It had audio capability, but he hadn’t spoken to her until now. The camera focused on the forty-something Lebanese man who ran a market on United Nations Drive. He was arguing with someone she didn’t recognize. Standing behind his checkout counter, the Lebanese glanced around the four-aisle market as though worried he’d be heard. He passed over Travis without any sign of suspicion and then turned back to the stranger. For as big as Travis was, he could blend in when he tried. Right now he was fingering a candy bar.

“Never seen him before,” he answered in a low voice. He never talked during surveillance, but the stranger presented a possible new twist to the mission.

They’d been tracking the Lebanese man in Monrovia, Liberia, for a few days now, watching his daily routine. The file in front of her said he was a diamond merchant named Habib Maalouf who had family history with Hezbollah. That made him worth a closer look. Which was the reason for this little endeavor into the fine, forsaken land of extortionists and murdering rebels. Diamonds didn’t wash through the country the way they did in Sierra Leone, but it was filled with people who’d do anything to get their hands on them.

“I’ll send something to Odie and see what she can come up with.” She cropped a picture of the man who’d resumed his heated discussion with the Lebanese merchant. Too bad they hadn’t bugged the checkout counter.

Travis passed the front counter and the two men stopped talking. Then the monitor filled with passing cars and people walking along the street.

Haley spotted a man leaning his shoulder against the white wall of a hat vendor across the street. His height and size made her notice him. He was very tall and big. Not overly muscle-bound, but solid and strong. Broad shoulders filled his white T-shirt. Round biceps. Sinewy forearms. Thick black hair and dark stubble. The way he perused the activity on the street gave her a chill. He gave nothing away. Didn’t smile. Didn’t alter his expression. Just watched. His gaze landed on Travis and then moved on.

Haley still-framed the digital recording and cropped another picture. She couldn’t explain why, but the guy gave her a funny feeling.

Travis left the busy activity along United Nations Drive. No one appeared ahead of him.

“You heading back?” She didn’t want to alert Travis to the man. Certain men scared her, and this one was no exception. He had a rugged, hard look that intimidated her. Maybe it was the lack of emotion that got to her. It reminded her of the way the Iraqi insurgents who’d captured her five years ago had looked at her. She couldn’t expunge it from her memory any more than she could overcome the lasting effect of her ordeal.

“Yeah?” She smiled. “So where do you want to risk food poisoning tonight?”

He chuckled. “Let’s stick with seafood.”

She pasted an image of the man with the merchant into an e-mail message and typed a quick note to Odelia Frank. The Army operations captain was the glue that held Tactical Executive Security together, and the reason many of their counterterror missions were so successful. Haley didn’t send her the image of the man outside the hat shop.

“Over and out.” She pulled off the headpiece to her radio. By the time her laptop shut down, Travis came through the door of their bland hotel room. At least it was clean.

He’d insisted on one room with two beds. He always did that. Overprotected her on TES missions. Sometimes she appreciated it, but only when she felt weaker than usual. Which, since Iraq, she occasionally did.

“We’ll need to keep an eye on that man our merchant met today. You think that button will look good on one of my blouses?”

“Are you suggesting you should do the ops next time?”

He knew she was, and that sparked her ire. She kept it in check. “They might recognize you.”

“You’re the comms and intel specialist. It’s what Cullen hired you for.”

“I can do more than that and you know it. I have training.”

“If we need a closer look, we’ll rely on Odie and get it electronically from her files.”

“Don’t do that, Travis.” There he went again, overprotecting her.

“I’m not arguing, Haley. If you don’t want to do this my way, you’ll have to take it up with the boss.”

“He’ll only say what you ask him to say.” Cullen McQueen was one of the toughest men she’d ever met, but when it came to women, he didn’t budge on safety factors.

“It isn’t my fault he agrees with me. And he’s only watching out for you.”

“Why? Because I’m a woman?” She told him what she thought of that in French.

He didn’t like it when she spoke in French because he didn’t know what she was saying.

“You always do that when you get mad.”

That wasn’t the only time. She’d learned French at a young age and it came in handy at times.

“What did you say?” he demanded this time.

“I said you men are all the same.”

“Haley, you know I wouldn’t want anyone else on the other end of my radio. You’re the brains of every operation.”

She got up from the hard wood chair and walked over to him. “Flattery doesn’t work on me. Haven’t you figured that out by now?”

“Why are you always so eager to put yourself in danger?”

His mouth curved into a doubtful frown.

“I just want to make a difference,” she said, wondering if she sounded defensive.

He didn’t comment further. He didn’t have to. And she was glad he didn’t press the issue. Everyone at TES knew about her capture. She’d never admit how much the possibility of remembering everything scared her. She didn’t know what happened after the insurgents started beating her, and she never wanted to. But she did remember the special forces soldiers who came to rescue her. Joining TES had given her the closest thing to retribution she could find. It was her way of fighting back, something she hadn’t been able to do when the insurgents had attacked her.

She rose up onto her toes and pressed a kiss to his cheek. “You’re like a brother to me.”

He smiled but didn’t say anything, softness still in his eyes. When she’d first met him, he’d intimidated her the same way the man outside the hat shop had. Once she got to know him, though, she wasn’t afraid anymore. They’d grown closer and had become friends.

They’d come close to more once, but she didn’t feel that kind of chemistry with him. That was why she hadn’t had a relationship with him—which would have been the first since her attack. Even if she were physically attracted to him, the idea of sleeping with him made her wince sometimes. He wasn’t an unattractive man, he was just, well, big. And always so careful around her. Like he might break her if he touched her. So he did all he felt he could do. Protect her.

If she couldn’t be intimate with someone as gentle and considerate as Travis, despite his looming appearance, would she be able to be intimate with any man? Iraq had changed her. The doctors had told her plenty. More than she wanted to know. Not having a memory of the torture didn’t erase the fact that it had happened. That was the part that bothered her most. She didn’t know what would have been worse, knowing how her body had been abused from a medical perspective or remembering it in vivid detail.

“Come on.” Travis headed for the door. “Let’s drive over to Broad Street. There’s a place I know that has good seafood.”

Hoaley Ill-Manored by Declan Sands
The Author's Friends by Shelly Douglas
You Before Anyone Else by Julie Cross and Mark Perini
Cambridge by Caryl Phillips
Loralynn Kennakris 3: Asylum by Owen R. O'Neill, Jordan Leah Hunter
Things Liars Fake (#ThreeLittleLies #3) by Sara Ney
Forgive Me by Daniel Palmer
There Are Little Kingdoms by Kevin Barry
A Better Man (The Men of Halfway House) by Reese, Jaime
Writing Mr. Right by Wright, Michaela