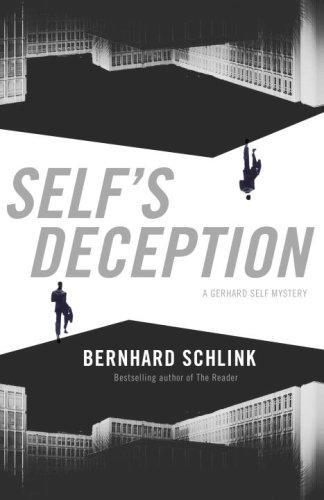 Bernhard Schlink is the author of the internationally bestselling novel The
Reader
and of four crime novels:
The Gordian Knot, Self's Punishment
(with Walter Popp),
Self's Deception, and Self's Slaughter
. He is a professor at the Benjamin Cardozo School of Law, Yeshiva University, in New York.

5
Turbo on my lap

7
Scratch a Swabian and you'll find a small Hegel

9
It was only later

10
Scott at the South Pole

11
Pictures from an exhibition

17
In response to an official request

18
A demigod in gray

23
The boy who lops the thistle's heads

27
My cards weren't all that bad

28
A trick that psychotherapists use

35
A nation of cobblers

10
And both sound so harmonious together

11
Under the pear tree

14
Not a particularly good impression

18
A little peace of mind

26
A pointed chin and broad hips

27
If we had put our money where our mouth is

She reminded me of the daughter I've sometimes wished for. Lively eyes, a mouth prone to laughter, high cheekbones, and rich, brown curls hanging down to her shoulders. The photograph didn't indicate whether she was tall or short, fat or thin, slouching or poised. It was only a passport photo.

Her father, Under-Secretary Salger from Bonn, had called me. For months he and his family had not heard from Leonore. At first they had simply waited, then they put in calls to friends and acquaintances, and finally notified the police. No luck.

“Leo is an independent sort of girl who likes to go her own way. But she's always stayed in touch, visiting, calling us. We were still hoping she might turn up for the beginning of the semester. She's studying French and English at the Heidelberg Institute for Translation and Interpretation. Well, the semester started two weeks ago.”

His voice sounded irritated: “Herr Self, the reason I'm resorting to a private investigator is because I'm hoping he might be the one who will do the investigating—not I. I have no idea whether she signed up or not.”

I patiently explained that every year thousands of people were reported missing in Germany, but that most of them disappeared and then reappeared of their own free will. They simply wanted to get away for a time from anxious parents, husbands, or loved ones. As long as you don't actually hear anything there's no reason to worry. When something bad does happen—an accident or a crime—that's when you hear.

Salger was aware of this. The police had already gone over it. “I respect Leo's independence. She's twenty-five and not a child anymore. I also understand that she might need some space. In the past few years there has been tension between us. But I have to know how she is, what she's up to, if she's OK. I don't suppose you have a daughter, do you?”

I didn't see that this was any of his business and didn't answer.

“It's not only me who's worrying, Herr Self. I can't tell you what my wife's been through these past few weeks…So I want quick results. I'm not asking you to confront Leo or embarrass her. I do not want her or any of her friends to know that there's a search on for her. I'm afraid she would take that very, very badly indeed.”

This didn't sound good. You can tail a person in secret once the person has been located, and you can look for a person overtly if you don't know where that person is. But not to know where a person is and to look for that person without her or her friends catching on is difficult, to say the least.

Salger was growing impatient. “Are you still there?”

“I want you to start right away and report back as soon as possible. My number is …”

“Thank you, Herr Salger, but I must decline. Have a nice day.” I hung up. I don't really care whether my clients' manners are good or bad. I've been a private investigator for almost forty years and have come across all types, those with proper upbringing and those without, timid types and audacious types, poseurs and cowards, poor devils and big shots. There were also the clients I had dealt with back in the days when I was a public prosecutor, clients who would have preferred not to be clients. But indifferent as I was, I had no wish to dance to the tune of the imperious under-secretary.

The following morning when I arrived at my office in the Augusta-Anlage, I found a yellow post-office notice hanging from the flap of the letterbox in my door: “Urgent. Express Mail. Please check your letterbox.” They needn't have left the notice, as all the letters pushed through the slot fall onto the floor of the former tobacconist's store where I have my desk with my chair behind it and two chairs in front, a filing cabinet, and a potted palm. I hate potted palms.

The express letter was heavy. A bundle of hundred-mark bills lay inside a folded sheet of paper covered with writing.

I hope you will forgive my abruptness on the phone. My wife and I have been under great strain over the past few weeks. I do not, however, imagine that the tone of our conversation could have led to your refusal to help us, so allow me to offer the enclosed five thousand marks as a deposit. Please stay in touch with me by phone. Over the next few weeks you can reach me only on my answering machine; I must take my wife out of this hell of uncertainty. But I will be picking up my messages regularly and can call you back any time.

I opened my desk drawer and took out a box of coffee beans, a bottle of sambuca, and a glass, and filled it. Then I sat down in my chair, cracked the beans between my teeth, and let the clear, oily sambuca roll over my tongue and down my throat. It burned, and the smoke of my first cigarette stung my chest. I looked out of the former storefront. It was raining in dense gray streams. In the murmuring traffic the hissing of the tires on the wet streets was louder than the droning of the engines.

After my second glass I counted the fifty hundred-mark bills. I looked at the envelope on both sides. Like the letter, it didn't have Salger's address. I called the telephone number in Bonn he'd given me.

“You have reached 41-17-88. Please leave a message at the sound of the tone. All messages will be answered within twenty-four hours.”

I also called Information and wasn't surprised to hear that there was no number listed for a Salger in Bonn. Presumably his address wouldn't be in the phone book either. That was as it should be—the man was safeguarding his privacy. But why did he have to safeguard his privacy from his own private investigator? And why couldn't he have at least cooperated to the extent of letting me know his daughter's address in Heidelberg? Besides, five thousand marks was far too much.

Then I saw that there was something else in the envelope. Leo's picture. I took it out and leaned it against the small stone lion I had brought back years ago from Venice and which stands guard over the telephone, the answering machine, the fountain pen, the pencils and notepads, the cigarettes and lighter. An overexposed photo-booth picture on cheap paper. It must have been about four or five years old. Leo looked at me as if she'd just decided to grow up, to no longer be a girl but a woman. There was something more in her eyes: a question, an expectation, a reproach, a defiance. I couldn't put my finger on it, but it moved me.

The Light of Burning Shadows by Evans, Chris
Born Twice (Vintage International) by Giuseppe Pontiggia
Cabin Gulch by Zane Grey
The Brilliant Fall of Gianna Z. by Kate Messner
Scorpion by Ken Douglas
Ascended by Debra Ann Miller
What I Came to Tell You by Tommy Hays
Claddagh and Chaos by Cayce Poponea
Brain Rules for Baby by John Medina
Reflections On A Middle-Aged Fat Woman by Palmer, Gianetta