Read The Garden of the Finzi-Continis Online

The Garden of the Finzi-Continis 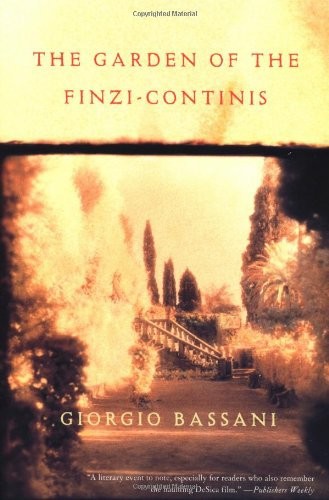 The Garden of the Finzi-Continis

In as dense and as charged a world as that of Marcel Proust, Giorgio Bassani tells the story of a tentative, hesitant love between two adolescents, set against the background of Fascist Italy and the ducal town of Ferrara, with its fascinating Jewish community.

The Finzi-Contini family, rich, refined and set apart, fascinated the narrator from his earliest childhood, and then one day he and Micol—that flaxen-haired, brilliantly alive, subtle half-child—finally meet. When racist rulings isolate the social life of theJews, they are drawn closer, till the almost inevitable end in a concentration camp.

Hailed as a masterpiece in every European country, it was not only acclaimed as a first-rate work of literature, but it replaced The
Leopard
as the most successful Italian book of recent times. Micol is as engaging a heroine as Tolstoy’s Natasha, and this little world so subtly and lovingly described draws you in as did Proust’s Paris. This is the work of a master stylist; the overtones and undertones haunt and linger. But the charm and humanity of the characters have the direct impact of great art.

Born in Bologna in 1916 of a Ferrarese family,
Giorgio Bassani
spent the first twenty-seven years of his life in Ferrara, the scene of this novel.

He was a founder of the Action Party in 1942, was imprisoned and was freed after the fall of Mussolini. From its founding in 1948 until 1960, Bassani was an editor of the international review
botteghe oscure.
For many years he was an editor for a Milanese publisher, where he brought out, among other books,
the leopard,
and taught history of the theatre at the Italian National Academy for Dramatic Arts. He is now one of the two vice-presidents of Radiotele-visione Italiana.

Bassani has written three novels:
gli occhiali d’oro
(
the gold-rimmed spectacles
), which appeared in English in 1960;
il giardino dei finzi-CONTINI
(
the GARDEN OF THE FINZI-CONTINIS);
and, most recently,
dietro la porta.
He has also written a book of long short stories,
le storie fer-raresi,
and a collection of poems,
l' alba ai vetri,
as well as essays and literary criticism which have not yet been collected into a volume.

In 1956 he won the Strega Prize with
le storie
FERRARESI. THE GARDEN OF THE FINZI-CONTINIS achieved the greatest popular success of any Italian book in recent years, and won the 1962 Viareggio Prize.

THE GARDEN OF THE

THE GARDEN OF THE
FINZI-CONTINIS

Translated from the Italian by Isabel Quigly

Of course the heart always has something to say, for one who knows how to hear it. But what does the heart know? At most, a bit about what is already past.

THE GARDEN OF THE

For years I have wanted to write about the Finzi-Continis-about Micol and Alberto, professor Ermanno and signora Olga - and the others who lived or like me spent time at the house in Corso Ercole I d’Este, at Ferrara, shortly before the last war broke out. But the urge, the impulse to get down to doing so, I had only a year ago, one April Sunday in 1957-

It was during one of the usual week-end outings. A group of us, divided between two cars, had gone out along the Aurelia highway straight after lunch, without anything very definite in mind. A few kilometres from Santa Marinella, attracted by the towers of a medieval castle that sprouted suddenly on the left, we turned down an unpaved country lane and ended up spread about the desolate sandy waste at the foot of the castle: which, looked at more closely, was a lot less medieval than it had promised from a distance, when we saw it from the highway, outlined against the light, on the dazzling blue expanse of the Tyrrhenian Sea. Buffeted by the wind, with sand in our eyes, unable even to visit the inside of the castle without written permission from some God-forsaken institute in Rome, deafened by the roaring surf, we felt thoroughly irritated and put out at having left Rome on such a day, which now, at the seaside, turned out so raw as to be practically wintry.

We walked up and down for about twenty minutes, following the curve of the beach, the only cheerful one among us being a small girl of nine, the daughter of the young couple who had brought me in their car. The wind, and sea, and wildly whirling sand, sent Giannina into transports ofexcitement which, with her gay, expansive nature, she made no effort to control. Although her mother tried to stop her, she had taken off her shoes and socks, and kept dashing up to the waves as they crashed on to the shore, wetting her legs up to the knee. In fact, she seemed to be enjoying herself no end, so that when we got into the car again, a bit later, I saw her vivid dark eyes, that glowed above the hot, tender cheeks, clouded over with obvious disappointment.

Back on the highway, in five minutes we were in sight of the road branching off to Cerveteri. As we had decided to go straight back to Rome, I was certain we would carry straight on. But instead, our car slowed down at this point more than it had to, and Giannina’s father put his arm out of the window. He was signalling to the second car, which was about thirty yards behind us, that he meant to turn left. He had changed his mind.

So we found ourselves on a small smooth paved road that in a moment took us to a group of houses, most of them new, and from there, winding round towards the hills of the hinterland, to the famous Etruscan necropolis. No one asked for an explanation, and nor did I.

After the houses the road was slightly uphil, and slowed us down. We were now a few yards from the tumuli called
montarozzi,
which are strewn all over the province north of Rome as far as Tarquinia and beyond, more on the hills than near the sea, thus making the whole of it into one vast, almost uninterrupted cemetery. Here the grass grows more greenly, and is thicker and darker than it is on the plateau below, between the Aurelia highway and the sea: which shows that the everlasting sirocco that blows in across the sea has lost most ofits saltiness by the time it gets up there, and that the dampness ofthe mountains notsofar away is beginning to have a good effect on everything growing.

“Where are we going?” asked Giannina.

Husband and wife were both sitting in front, with the child between them. Her father took his hand off the steering-wheel and laid it on Giannina’s dark curls.

‘We’re going to take a look at some tombs that are more than four or five thousand years old,” he said, in the tone of someone about to tell a story, and so not fussing much about the accuracy ofhis figures. “Etruscan tombs.”

“How gloomy!” sighed Giannina, laying her head on the back of the seat.

“Why gloomy? Haven’t they told you at school who the Etruscans were?”

“In our history book they’re right at the beginning, near the Egyptians and the Jews. But who d’you think were older, Papa, the Etruscans or the Jews?”

Her father burst out laughing.

“Try asking him,” he said, jerking his thumb at me.

Giannina turned round. Her mouth hidden by the edge of the seat, she glanced at me quickly, looking severe and suspicious. I waited for her to repeat the question. But nothing happened: she turned round again at once and looked ahead of her.

Down along the road, which still sloped slightly and was flanked by a double row of cypresses, groups of country people, boys and girls, were coming down towards us. It was the Sunday stroll. Some of the girls walked arm in arm, and spread across into the middle of the road, and as we met them, we could feel them staring at us through the windows, their laughing eyes full of curiosity and of a kind of strange pride, or barely concealed scorn.

“Papa,” Giannina asked, “why are old tombs less gloomy than new ones?”

A larger group than the others, taking up most of the road, and singing in chorus without bothering to get out of our way, had almost brought the car to a stop. Her father went into second gear.

“Well, of course, people who’ve just died are nearer to us, so we love them more,” he said. “You see, the Etruscans have been dead for such ages” -and again he was telling a fairy-tale-“that it’s as if they’d never lived, as if they’d
always
been dead.”

Another pause, longer this time. At the end of which (we were now very near to the open space outside the entrance to the necropolis, full of cars and motor coaches), it was Giannina’s turn to teach us a lesson.

“But, now you’ve said that,” she said gently, “you’ve made me think the Etruscans did actually live, you know, and I love them as much as everyone else.”

Our visit to the necropolis, I remember, was wrapped round in the remarkable tenderness of what she had said. It was Giannina who made us ready to understand. It was she, the youngest, who in a way led us on.

We went inside the most important tomb, the one that belonged to the noble Matuta family: a low underground hall with twenty funeral beds arranged in as many niches in the tufa walls, and decorated with closely packed polychrome plaster casts of the beloved, trusted objects of everyday life: stoppers, ropes, hatchets, shears, spades, knives, bows, arrows, even hunting dogs and marsh birds. And meantime, I had cheerfully abandoned my last philological scruples, and was trying to imagine concretely what their frequent visits to this suburban cemetery can have meant to the late Etruscans of Cerveteri, the Etruscans after the time of the Roman conquest.

They would come from their nearby homes, probably on foot-1 imagined-family groups, troops of young people like those we had met just now in the road, pairs of lovers or friends, or else alone; just as today, in Italian villages, the cemetery gate is still the place where every evening stroll is bound to end. They came among the cone-shaped tombs, which are as solid and heavy as the bunkers the German soldiers strewed vainly all over Europe during this last war (gradually, through the centuries, the iron cart-wheels have cut two deep parallel furrows in the paved road that crosses the cemetery from one end to the other): tombs that, even inside, obviously resembled the fortress-houses of the living. The world changed, admit-tedly-they must have said to themselves-it was no longer what it once had been, when Etruria, with its confederation of free aristocratic city-states, dominated nearly the whole of the Italic peninsula. New civilizations, rougher and more plebeian, but stronger and more warlike as well, now held sway. But what did it matter?

Once inside the cemetery where each of them owned
a
second home, and in it the bed on which he would soon be laid to rest with his fathers, eternity must no longer have seemed an illusion, a fairy-tale, a priests’ promise. Let the future overturn the world, if it cared to; but there, whatever happened, in that small space sacred to the family dead; in the heart of those tombs where they had the foresight to take, not only their dead, but everything that made life beautiful and desirable; in that sheltered, well defended corner of the earth, there at least nothing would change, and their thoughts, their madness, still hovered round the conical mounds covered in coarse grass after twenty-five centuries.