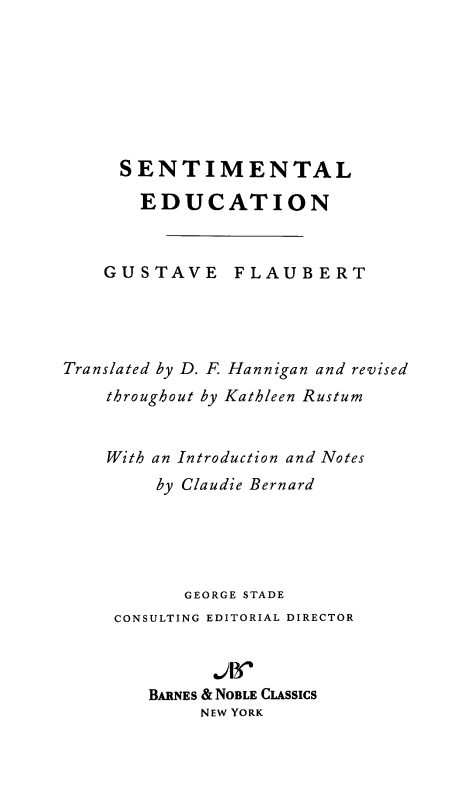 Table of Contents
FROM THE PAGES OF SENTIMENTAL EDUCATION
Title Page
Copyright Page
GUSTAVE FLAUBERT
THE WORLD OF GUSTAVE FLAUBERT AND SENTIMENTAL EDUCATION
Introduction
PART ONE
CHAPTER I
CHAPTER II
CHAPTER III
CHAPTER IV
CHAPTER V
CHAPTER VI
PART TWO
CHAPTER I
CHAPTER II
CHAPTER III
CHAPTER IV
CHAPTER V
CHAPTER VI
PART THREE
CHAPTER I
CHAPTER II
CHAPTER III
CHAPTER IV
CHAPTER V
CHAPTER VI
CHAPTER VII
ENDNOTES
INSPIRED BY SENTIMENTAL EDUCATION
COMMENTS & QUESTIONS
FOR FURTHER READING
FROM THE PAGES OF
SENTIMENTAL EDUCATION
Never before had he seen more lustrous dark skin, a more seductive figure, or more delicately shaped fingers than those through which the sunlight gleamed. He stared with amazement at her work-basket, as if it were something extraordinary. What was her name, her home, her life, her past? (page 9)
“Without ideas, there is no greatness; without greatness there is no beauty. Olympus is a mountain. The most astonishing monument will always be the Pyramids. Exuberance is better than taste; the desert is better than a sidewalk, and a savage is better than a hairdresser!” (page 54)
The dinners started again; and the more visits he paid at Madame Arnoux’s, the more his lovesickness increased. The contemplation of this woman had an enervating effect upon him, like the use of a perfume that is too strong. It penetrated into the very depths of his nature, and became almost a kind of habitual sensation, a new mode of existence. (page 78)
He displayed high spirits on the occasion. Madame Arnoux was now with her mother at Chartres. But he would soon come across her again, and would end by being her lover. (page 98)
“What are you to do in an age of decadence like ours? Great painting has gone out of fashion!” (page 126)
There was a look of peculiar sadness in Madame Arnoux’s face. Was it to keep him from further reference to the memories they shared? (page 152)
Then began for Frédéric a miserable existence. He became the parasite of the house. (page 191)
“So happiness is impossible?” (page 223)
Then, forgetting his own troubles, he talked about the affairs of the nation, the crosses of the Legion d’honneur wasted at the Royal Fête, the question of a change of ministry, the Drouillard case and the Bénier case—scandals of the day—denounced the middle class, and predicted a revolution. (page 243)
And they pictured a life entirely devoted to love, sufficiently rich to fill up the most vast solitude, surpassing all other joys, defying all sorrows; in which the hours would glide away in a continual out-pouring of their own emotions, and which would be as bright and glorious as the shimmering splendour of the stars. (page 303)
“Spare nothing, ye rich; but give! give!” (page 337)
Four barricades at the ends of four different routes formed enormous sloping ramparts of paving-stones. Torches were glimmering here and there. In spite of the rising clouds of dust he could distinguish infantrymen and National Guards, all with their faces blackened, disheveled, and haggard. (page 373)
This event was a calamity which, in the first place, put off their separation, and, next, upset all his plans. The notion of being a father, moreover, appeared to him grotesque, unthinkable. (page 402)
“Have you twelve thousand francs to lend me?” (page 452)
“I would have liked to make you happy!” (page 473) 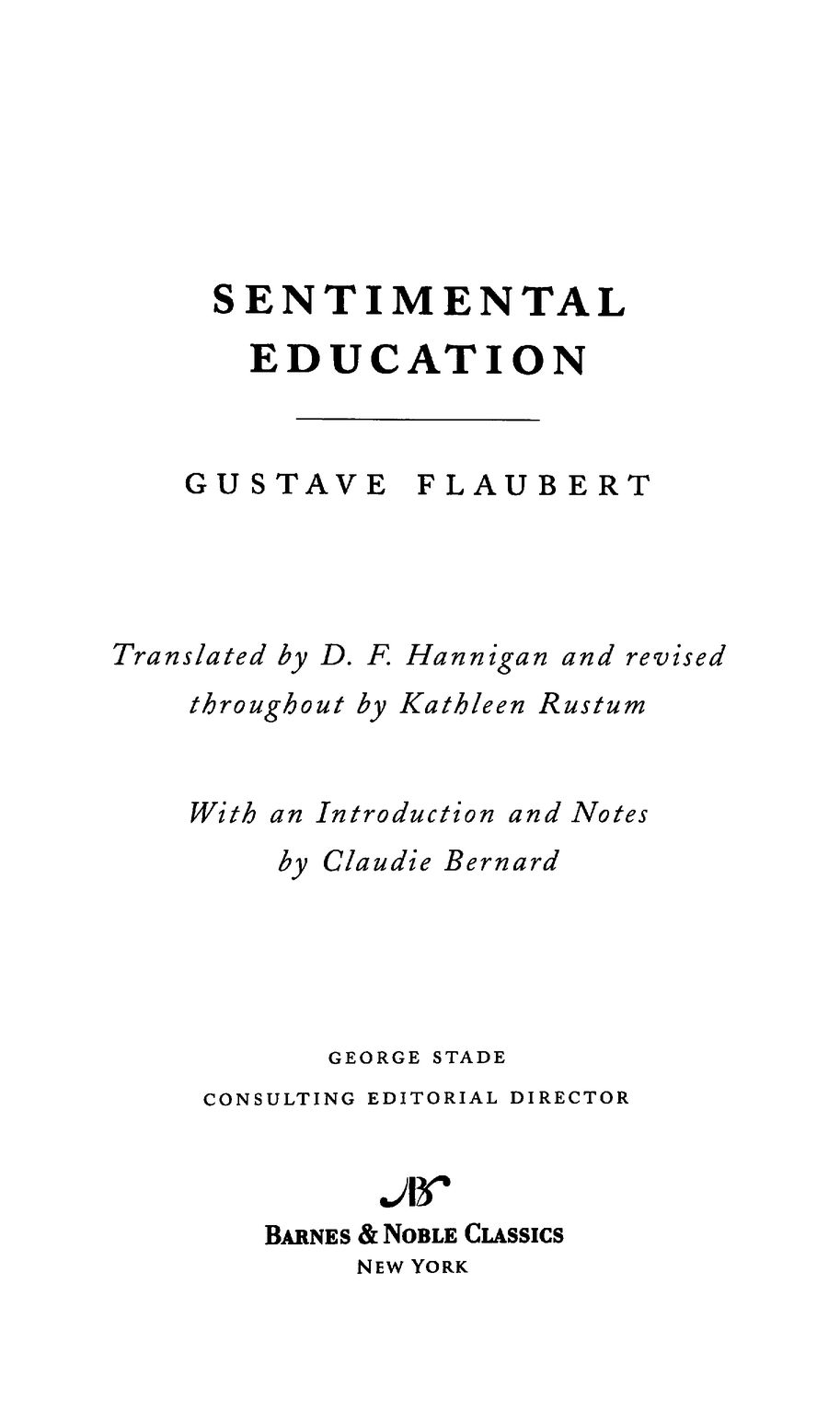 Published by Barnes & Noble Books 122 Fifth Avenue
New York, NY 10011
www.barnesandnoble.com/classics
L‘Éducation Sentimentale
was first published in 1869.
D. F. Hannigan’s English translation appeared in 1898.
Published in 2006 by Barnes & Noble Classics with new Introduction,
Notes, Biography, Chronology, Inspired By, Comments & Questions, and For Further Reading.
Introduction, Notes, and For Further Reading
Copyright © 2006 by Claudie Bernard.
Note on Gustave Flaubert, The World of Gustave Flaubert and
Sentimental Education, Inspired by Sentimental Education,
and Comments & Questions
Copyright © 2006 by Barnes & Noble, Inc.
All rights reserved. No part of this publication may be reproduced or transmitted in any form or by any means, electronic or mechanical, including photocopy, recording, or any information storage and retrieval system, without the prior written permission of the publisher.
Barnes & Noble Classics and the Barnes & Noble Classics colophon are trademarks of Barnes & Noble, Inc.
Sentimental Education
ISBN-10: 1-59308-306-8 ISBN-13: 978-1-59308-306-9
eISBN : 978-1-411-43315-1
LC Control Number 2005907805
Produced and published in conjunction with:
Fine Creative Media, Inc.
322 Eighth Avenue
New York, NY 10001
Michael J. Fine, President and Publisher
Printed in the United States of America
QM
13579 10 8642
FIRST PRINTING
GUSTAVE FLAUBERT
Gustave Flaubert was born in 1821 in Rouen, France. His father, a respected surgeon, raised his family in quarters near the hospital where he worked. Gustave was a deeply romantic young man, and he developed an early and permanent disdain for the life of the French bourgeoisie. Its banalities and exigencies trapped him for a time, as he was encouraged to study law, like many a respectable bourgeois son. However, in 1844 his schooling in Paris came to an abrupt halt when he had a series of health problems resulting in seizures and a coma. These attacks, now thought to be symptoms of epilepsy, required Flaubert to leave school and return to the provinces. Established on his estate in Croisset, he dedicated himself to his true passion—literature.
Flaubert’s convalescence was soon disrupted. His father died in January 1846, and his beloved sister, Caroline, who had recently given birth, died six weeks later. In his mid-twenties, Flaubert became head of a household that now included his mother and his sister’s daughter. Although the three lived a placid country life together for many years, Flaubert often visited Paris, where he fell in love with Louise Colet, cultivated a friendship with writer and photographer Maxime du Camp, and witnessed the Revolution of 1848. He worked for many years on a novel,
The Temptation of Saint Anthony
(finally published in 1874), that in its early drafts was criticized by his friends for being overly romantic.
Upon returning in 1851 from a tour of the Near East, he began a novel in which he experimented with a new narrative style. Working tirelessly for almost five years, taking great care over each sentence, Flaubert composed his masterpiece,
Madame Bovary,
the story of a disenchanted provincial wife. When it was published (in installments in 1856, in book form in 1857)
Madame Bovary
caused a sensation; its frank depiction of adultery landed Flaubert in the courts on charges of moral indecency. Exonerated, the author became a respected frequenter of the Parisian salons, was awarded the French Legion of Honor, and formed friendships with George Sand, Émile Zola, and Guy de Maupassant.
Although he continued to visit Paris frequently, Flaubert lived for most of the year in Croisset, where he wrote and revised his works, and amassed an astonishing body of correspondence. He is also remembered for his novels
Salammbo
(1862) and
Sentimental Education
(1869) and for the collection
Three Stories
(1877). Financial troubles beset him late in his life, and he spent his final years somewhat isolated and impoverished. Gustave Flaubert died on May 8, 1880, in Croisset.
THE WORLD OF GUSTAVE FLAUBERT AND
SENTIMENTAL
EDUCATION