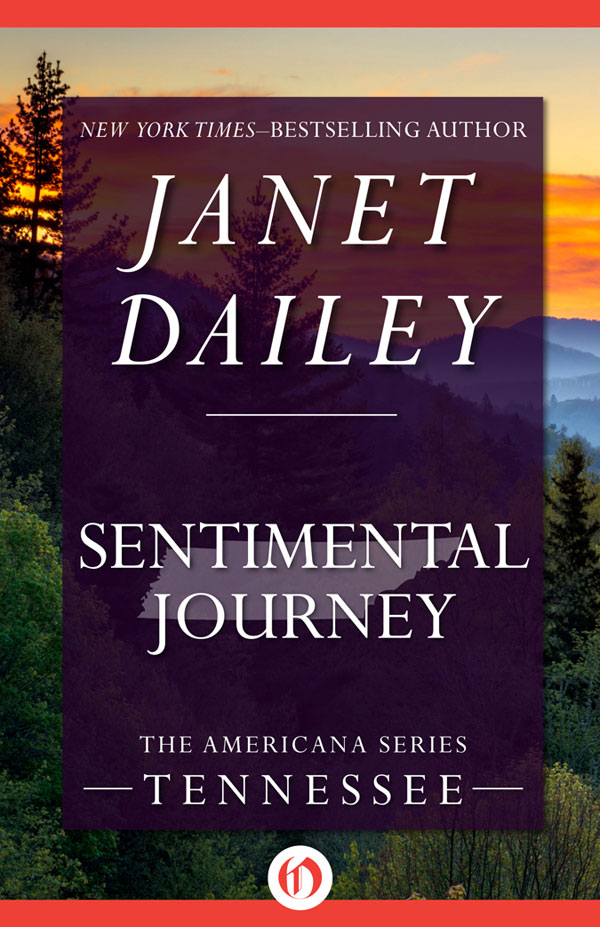 Introducing JANET DAILEY AMERICANA Every novel in this collection is your passport to a romantic tour of the United States through time-honored favorites by America's First Lady of romance fiction. Each of the fifty novels is set in a different state, researched by Janet and her husband, Bill. For the Daileys it was an odyssey of discovery. For you, it's the journey of a lifetime.

OVERHEAD, THE SUN WAS BRIGHT with the promise of spring. Its direct rays were warming, but the nipping north wind retained the cool breath of winter. A sudden gust whipped dust into an eddy and sent it whirling across the busy intersection, sweeping the street and bouncing off traffic.

Jessica Thorne strolled along the sidewalk, glancing into store windows, her hunter-green coat unbuttoned to the brisk air. She adjusted the shoulder strap of her handbag and slipped her hand back into her coat pocket. The teasing wind mussed the waving wing of silky blond hair at her temple, but Jessica made no attempt to smooth it into place. There would be time enough to freshen up when she returned to the office.

A twinge of restlessness swung her gaze to the Tennessee hills rising around Chattanooga. Evidence of spring was visible in the delicate shading of green on the hillside—new leaves, new grass, new life. Soon the dogwood and rosebud would be blooming. The knowledge shadowed the already dark green of her eyes. But Jessica was unaware of it and would have been at a loss to explain why it should.

Her shoulder brushed against a passerby, returning her attention swiftly to her surroundings. "Excuse me," she murmured in apology, but the woman was already several steps beyond her and didn't hear.

The traffic light at the intersection was green. Jessica quickened her pace to catch the light. As she reached the crosswalk, it turned to amber, Don't Walk flashing beneath it. Traffic surged forward and she had to wait with the other pedestrians on the curb.

A man stood beside her. His imposing height attracted her glance. Coatless against the invigorating weather, he wore a dark business suit and tie. When Jessica would have looked away, the breeze ruffled the sable black mane of hair. A memory clicked in her mind, elusive yet strong.

Her gaze sharpened on his craggy profile. There was a quality of toughness in his lean, hard features that was familiar. Jessica was certain that she knew him, but she couldn't place where or how. He wasn't the kind of man a person could easily forget, which made it all the more confusing.

The man was someone from the past. Time had etched lines around his eyes and mouth, hinting that his age was in the middle thirties. That eliminated the possibility that he was someone she had gone to school with, since she was only twenty-three.

Perhaps the clothing or environment was wrong. The dark suit was hand tailored, the material expensive. He wore it with an ease that indicated that he was accustomed to such clothing, yet Jessica had the distinct feeling he had not been wearing such attire whenever she had met him. What had he worn? A uniform? The answer eluded her.

Becoming aware of her scrutiny, the man glanced at her. His eyes were a shattering blue, narrowed to have the piercing effect of a hard blue diamond. The look was familiar, but Jessica experienced a sense of unease that bordered on fear. She felt her pulse fluttering in alarm. The impulse was strong to look away, to avoid any further contact with the man.

She was stopped from obeying it by the recognition that flickered uncertainly across his face. His raking gaze made a swift, piercing study of her, noting her honey-colored hair and the clouded green of her eyes. So thorough was the inspection that Jessica had the sensation that her coat was stripped away to allow him to examine the slender curves of her figure.

Dark eyebrows drew together in a frown. "Do I know you?"

The voice fitted the man, low pitched and demanding in its curiousness. It struck a familiar chord, but Jessica still could not remember his name.

The shake of her head was more uncertain than negative. "I'm not sure."

"That voice." He paused and seemed to search his memory while his gaze never left her face. "My God!" Recognition glittered in the hard blue eyes, tempered with a hint of skepticism. "Can it be? Jordanna?"

"Jordanna is my sister." Eight years older than Jessica, there was a similarity between the sisters despite the age difference. Besides, all the Thornes had blond hair and either green or blue eyes.

"Of course." His mouth quirked at the corners in self-derisive amusement. "I should have realized you're too young to be Jordanna. You're about the same age Jordanna was when I left. I guess I didn't make allowances for the amount of time that's passed."

Neither noticed the traffic light change, but as the other people at the curb brushed past them to enter the crosswalk, they became aware of the fact. His hand cupped Jessica's elbow to guide her across. The strong, firm grip of his hand sent a tremor of unease through her. The physical contact increased the feeling that she should stay clear of him.

As he escorted her across the intersection, Jessica was still no nearer to remembering who he was. She had searched her memory, trying to recall the men her older sister had dated. None seemed to resemble the man striding beside her.

Stealing a glance at him, Jessica could almost see the wheels turning in his mind. For an instant, there was a cunning look about him. The thought leaped into her mind that, ultimately, he would always get what he wanted. It didn't seem to bode well.

Safely across the street, he stopped, his hand halting her. "What a small world it is!" His lazy smile looked pleased. "Almost my very first day back, I meet a Thorne. It's an amazing coincidence."

"Yes," Jessica agreed, although she didn't know why it was. "Were you a friend of my sister's?"

"A friend?" he repeated with a faintly cynical gleam. "No, I wasn't a friend. I had met your sister, but we never reached the stage of knowing each other well, through no fault of mine."

Jessica was intrigued by his answer. She didn't know what it meant—whether her sister had not wanted to get to know him better or whether her sister was too complicated to know well. She would have pursued the subject, but
he changed it.

"Where is Jordanna now? Married, I suppose."

"Yes, she is. She has two children, a boy and a girl. She and her husband live in Florida."

He removed his hand from her arm and Jessica breathed a silent sigh of relief, as if she were once again in full possession of herself. He slipped both hands into the pockets of his slacks, a seeming concession to the brisk air except that his suit jacket was pushed open. The thin material of his shirt covered the muscular wall of his chest down to the trimness of his waist and fiat stomach.

Fireshaper's Doom by Tom Deitz
Home To You by Robin Kaye
Red Letter Day by Colette Caddle
Murder in Adland by Bruce Beckham
J. Edgar Hoover: The Man and the Secrets by Curt Gentry
Travels with Myself and Another by Martha Gellhorn
Die Now or Live Forever by Anne Rooney
The Earthrise Trilogy by Colin Owen
The Other Madonna by Scot Gardner
Un secreto bien guardado by Maureen Lee