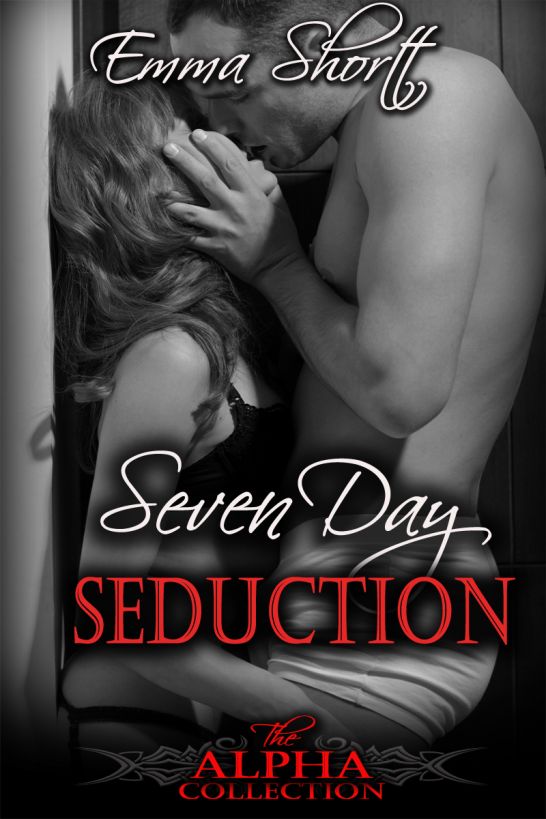 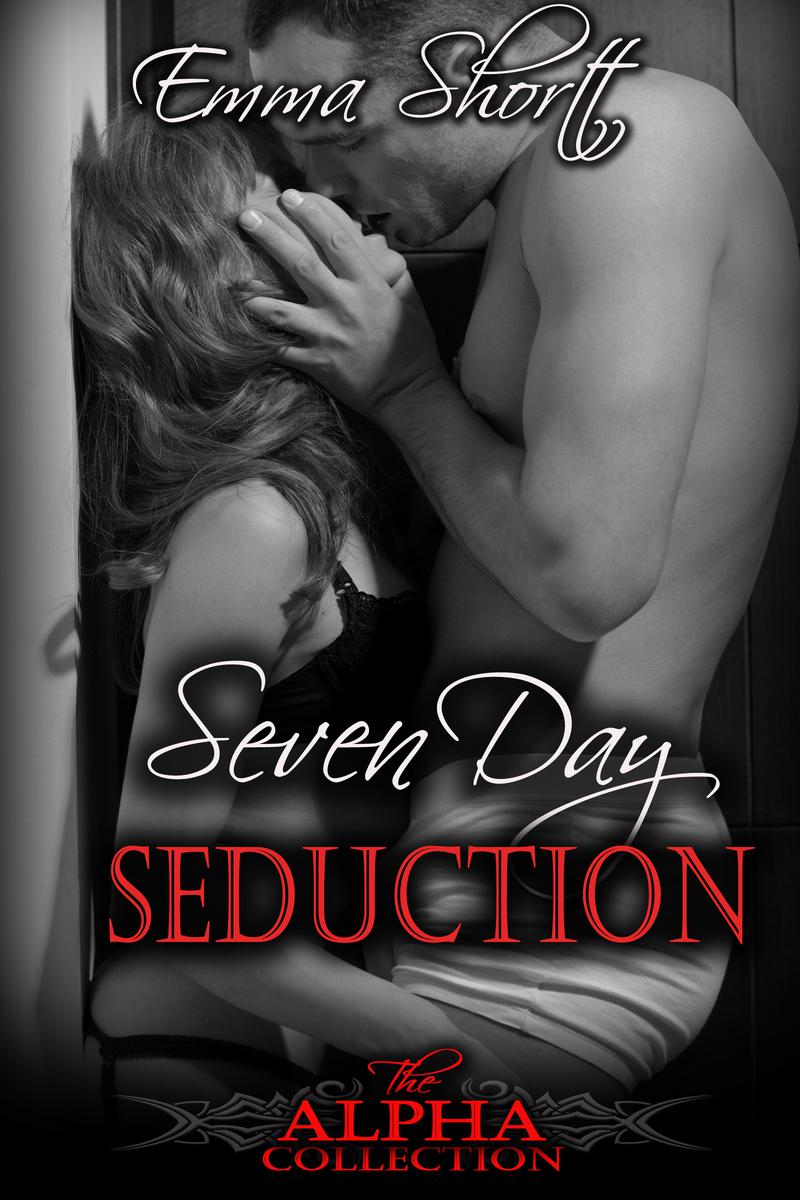 The moment Jude walks into Louise’s
life she knows that nothing is ever going to be the same again. He
is commanding, domineering, and beyond arrogant, but he is also the
most attractive man she has ever met, the only one who has ever
made her heart thump and her knees weaken. Which is a problem,
because Louise is engaged to be married….

For Jude, Louise’s engagement is
nothing more than an obstacle to get around. Never has he desired
anyone as much as he desires her, and he will let nothing stand in
the way of his seduction. He promises her that in seven days she
will be beneath him, with no ring on her finger.

She promises him that she will
resist.

Will Louise be able to keep
her life from spiraling
out of control, or
will she lose more than just her ring, will she lose her heart
too?

ALL RIGHTS
RESERVED:
This literary work may not be
reproduced or transmitted in any form or by any means, including
electronic or photographic reproduction, in whole or in part,
without express written permission.

All characters and events in this book
are fictitious. Any resemblance to actual persons living or dead is
strictly coincidental.

To those kicks up the butt that get us
moving when we need it.

Louise Marlowe stepped out of her car, slung
her satchel over her shoulder, and took a good look at the building
in front of her, the building that belonged to none other than her
prospective client, Jude Jacobs.

It was smaller than she’d expected it to be.
Certainly the photos she’d looked up on Google maps had made it
seem larger. It was also a whole lot noisier. Behind the warehouse,
at the very end of the building, she could hear workers moving
around, a radio playing, a group of men laughing.

The office side of the building was just as
bad. A handful of grimy windows were propped open, and Louise could
hear competing music coming from them, as well as a number of
overly loud voices. It sounded busy, chaotic, and she swallowed
nervously as she imagined what it would be like when she was
inside.

Louise sighed slightly as she locked her
car, and narrowed her eyes on the patch of bare earth standing
between her vehicle—parked in the only free spot—and the thin strip
of concrete that marked the entranceway to the office. It ended
abruptly, offering no way across but through the clumpy mud,
meaning she had no choice but to attempt to step over it.

Louise looked down at her pencil skirt,
wondering if the material would stretch far enough to allow her to
make the distance. Probably not, but then she couldn’t walk through
it, her shoes would end up covered in mud, and that was no way to
arrive at a potential job, especially not one she needed as much as
this.

Louise frowned, and planted one of low
heeled pumps on the edge of the parking space. Then, satchel
swaying slightly, and briefcase in hand, she moved her other foot
as far as it would go. An inch or so of mud separated her from the
strip of concrete. She pushed a little further.

Something that sounded suspiciously like
fabric trying to tear hit her ears, and Louise almost squeaked in
horror. A nasty vision of her walking into Jude Jacobs’ building
with her thighs on show, skirt fluttering around the panty hose
clad flesh, made her cringe, and before giving herself time to
think it through Louise pushed herself off the ground, and jumped
across the mud patch.

She very almost made it.

Only one of her heels sunk into the mud, but
Louise had to swing her arms a little to steady herself. She hoped
to holy hell that no one was watching her through the dirty
windows, because she knew she looked an absolute sight!

Scowling at the thought she pulled her heel
free, before bending slightly to assess the damage. Just a
sprinkling of mud stuck to the inch or so of heel, the rest of her
shoe was fine, the thick leather no match for the loose dirt.
Louise breathed a sigh of relief, congratulating herself for the
umpteenth time that she’d thought to buy such sensible shoes. They
had to be what? Four years old now? And there was barely a scratch
on them.

She walked forward along the concrete, her
low heels clacking on the rough surface as she went. The door to
the office was closed, and the top portion of it was glass. Louise
narrowed her eyes as she approached, giving herself a once over in
the reflective surface. Her fair hair was smoothed tightly back
into its usual bun, her crisp, white shirt was buttoned almost to
her throat, and her grey suit jacket was nice and secure. Yes, she
thought, as she pulled open the door, she looked professional,
businesslike. And that was important because Louise needed the
position that Jude Jacobs was offering.

In fact, it would not be a lie to say that
the future of the company she worked for was resting on it.

Jude Jacobs stepped away from his office
window, the very one that happened to overlook the parking lot, and
laughed softly to himself.

Little Miss Prim and Proper, whoever the
hell she was, had put on quite a show, and as well as being amused
Jude was intrigued. Might have been the ridiculously tight skirt
that had done that, he conceded. Never had he seen a woman fill one
out in a more appreciable way, and from his position he’d seen
plenty.

Watching, hands in pockets, as she’d
stretched her foot as far as it would go to try and avoid the death
strip, he’d found himself leaning forward to get a better view. A
moment later and he’d closed the distance between his whiteboard
and the large window—just in time to get a really good look.

A heart beat later he was hard.

That was unexpected, and
Jude frowned slightly as he reached down to palm his length. He was
well past the age of random hard ons. In fact, if anything he’d
found himself almost bored by the women that had crossed his path
of late. But then Little Miss Prim and Proper’s stretching
action
had
pulled
her skirt right across her shapely thighs and curvy little
ass.

Jude almost found himself willing her to try
and move a bit more, hoping that the skirt might waver under the
pressure. She didn’t, it didn’t, and Jude wasn’t sure whether he
was relived or disappointed.

Not that it mattered. Even now she was
making her way inside, and Jude had every intention of heading out
to meet her. She was a mystery, completely out of place in his
little corner of the world. His warehouse complex—the headquarters
of his multi-million dollar business empire—sat on the outer edges
of town, so they received very few visitors that had not been
expressly invited. That was something that Jude had banked on when
he’d chosen this spot to build. Privacy was important to him. In
fact, it was a rare occurrence that anyone just happened to head
their way.

So who the hell was Miss Prim and Proper,
Jude wondered? What the hell was she doing flouncing her way around
his property? And more importantly, how quickly could he get her
out of that pencil skirt?

The receptionist, whose name plate read
Ginny, took the card that Louise offered, and shot her a friendly
smile. “Is Jude expecting you?”

Louise nodded, her stomach flipping slightly
with nerves. “He is. Mr. Jacobs and I have a one o clock
appointment.”

Ginny laughed, stood up behind her desk, and
dropped her iPod on a pile of papers—ear buds and all. “It’s Jude.
We’re very informal around here.”

Informal
was
certainly one way to
describe the young receptionist’s outfit, which, now she was stood,
Louise could see in its full glory. A tiny vest top, a mini skirt,
and—Louise only just stopped herself raising an eyebrow in
admiration—heels that had to be at least five inches.

Was this the expected office attire, Louise
wondered? Carefully she let her eyes drift around the open plan
office. An office that was far more modern than the outside
suggested. Sleek desks, flat screens on the walls, iPods plugged in
here and there.

The people milling about
smiled at her, curiosity in their open expressions. There seemed to
be an equal number of men and women, maybe fifty people in all. The
men wore jeans and tees, the women wore skimpy skirts, or tiny
little dresses. One was even in shorts and a stomach baring crop
top. It
was
hot,
the never ending summer seeming to stretch its tendrils into fall,
Louise conceded that. But still…it was hardly professional, and by
all accounts Jude Jacobs was a very professional man.

At just thirty years of age he had made his
first million inventing some sort of industrial device. By
thirty-five those millions had multiplied themselves several times
over. When she’d undertaken her research Louise hadn’t been able to
work out why such a successful man would base himself in such an
odd area. Surely it would make more sense to set up his
headquarters in one of the huge complexes he owned in town?

“Jude’s PA isn’t here, so
I’ll just go let him know you’re here,” Ginny said, pulling
Louise’s gaze back to her, and halting her wandering thoughts. “Why
don’t you take a seat?” She waved a hand towards a comfy looking
couch and a number of bean bags. They were pushed back against one
of the walls, and a sign proclaimed the area ‘
Lazy Space
’. “There’s a water cooler
next to the table, help yourself,” Ginny added. “It’s hot as Hades
in here.”