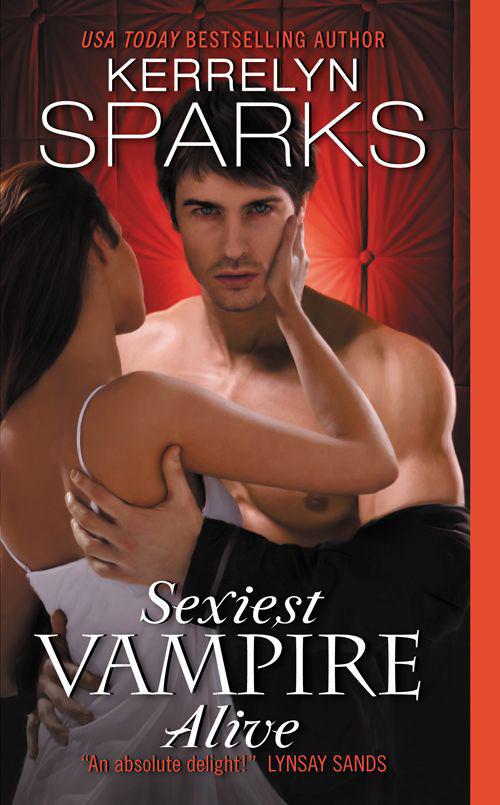 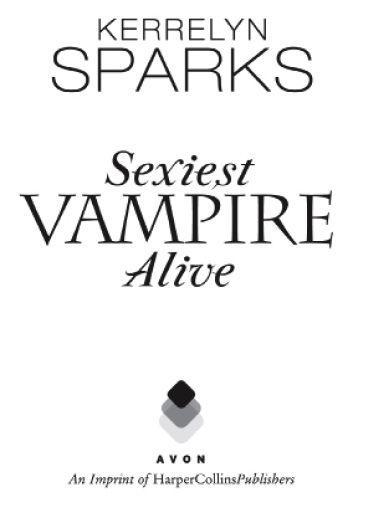 always there with a warm hug,

Thank you for believing in me and being proud.

It was an honor to be part of your life.

Preview and Buy Other Avon Books

S
imone tore the man’s shirt open and skimmed her hand down his smooth, hairless chest and rippled abs.

“I have a hunger that cannot be denied,” she murmured in her husky French accent.

The man turned his chiseled jaw to expose his neck. “Take me. My body, my blood—I’m all yours.”

She trailed a finger along his carotid artery, then suddenly shoved him away. “No! I can no longer bear it!”

With a dramatic swish of her pink silk negligee, she rose to her feet. The voluminous skirt swirled around her long legs, allowing a peek at her matching pink stilettos.

She lifted a pale hand to her brow. “What is a vampire to do? For so many years I have endured the same taste. How I long for something different!”

She moved forward, lowering her hand with a graceful flutter. “I need something new, something rich, robust, and sophisticat— Ack!” She tripped on her nightgown and fell flat on her face.

“Cut!” The director cursed under his breath, then leaned toward Gregori and whispered, “Are you sure we have to use her?”

Gregori hid his frustration, like he normally did, and gave Gordon an encouraging smile. “She’ll be fine. She’s the most famous model in the vampire world.”

“Yeah, you’ve mentioned that about five times. But she can’t act. Hell, she can’t even walk.”

Gregori’s smile faltered slightly as he inwardly winced. He thought he’d scored a coup, convincing the famous Simone to star in his commercial introducing the latest creation in Vampire Fusion Cuisine, Blardonnay. But after three hours of shooting, there wasn’t a single successful take.

The director and film crew at the Digital Vampire Network in Brooklyn had already polished off the crate of twenty-four bottles he’d brought as a gift. The mixture of synthetic blood and Chardonnay was no longer strong enough for the director. Gordon tipped back a bottle of Blissky, then gave Gregori a sour look.

“The sun will rise in about ninety minutes,” he muttered. “I’m calling it quits before my tortured crew runs outside to fry themselves in a blaze of glory.”

“It’s not that bad,” Gregori assured him. “With some careful editing, we’ll have—”
Zip
. “You’ll still get paid for your time.”

Gordon snorted and took another swig of Blissky.

Gregori adjusted his tie while he considered his options. He was the one who would have to answer to his boss for spending a small fortune on a commercial that wasn’t happening. It wouldn’t help matters if he criticized Simone. She might look frail and delicate, but, enraged, she could inflict a massive amount of damage with her superior vampire strength.

There was the time she’d destroyed a dance club in Manhattan when no one had recognized her. Gregori had used a huge amount of vampire mind control to wipe the memory of every terrified mortal who had witnessed her temper tantrum. Unfortunately he hadn’t been around to clean up when a paparazzo in Paris had snapped her photo without her permission. She’d tossed the photographer clear across the Champs Élysées.
Le Figaro
had speculated that her odd display of strength meant she was high on PCP. She’d retaliated the next night by ripping a street lamp out of the sidewalk and crashing it through the newspaper office’s plate-glass window. Somehow, she thought she’d proved them wrong.

He adjusted his cuff links as he resigned himself to the only logical course of action: playing the role of the kind and sympathetic friend, otherwise known as major suck-up. Sheesh, the stuff he had to do for his job.

He stepped onto the set, which consisted of thick ivory carpet and an ivory satin settee. The male model sat sprawled on the settee, not even attempting to help Simone, who remained tangled in her negligee, wallowing on the carpet like a nearly starved, beached whale.

“Simone, sweetheart, are you all right?” He lifted her carefully to her feet. She was so thin, it was like propping up a broomstick in a strong wind. “It’s not like you to fall down.”
Twelve times
.

“It is these ridiculous shoes you made me wear. They’re too big.” She raised her voice so everyone in the studio could hear. “You know I wear a size five.”

She wore an eight. Gregori knew because she’d begged him to buy her a pair of Jimmy Choo sandals last Christmas. He’d done it, not out of any special affection for Simone, but for business reasons. As marketing director at Romatech Industries, he knew the value of staying chummy with the most influential personalities in the vampire world.

“Is your gown too long?” he suggested. “We could have it shortened a bit.”

“I like it long. It makes me look taller. And thinner.”

Good God, if she was any thinner, she’d be two-dimensional. “You look beautiful, Simone. But . . . I’m afraid your concentration is off just a tad. Perhaps if we—”

“It’s
his
fault!” She pointed a perfectly manicured pink nail at the male model who was busy taking off the shirt she’d ripped. “He’s too ugly to work with.”

Gregori glanced at the model. “He looks fine to me.”

“Why, thank you, handsome.” The male model winked.

Oh shit.
“Simone, we can’t keep replacing the guy for you. This is the eighth one. The talent agency is running out of guys, and we’re running out of time, so do you think you could possibly bring yourself to work with this one?”

She stuck out her bottom lip in a pout. “He’s repulsive. I shudder when I have to touch him.”

The male model wagged a finger at her. “It’s not like I’m enjoying it either, girlfriend.”

“It’s called acting, Simone,” Gregori whispered. “You have to pretend to desire him. He could be as ugly as a turnip, but you make us believe he’s stunning.”

“But I
am
stunning.” The model flipped his long blond hair over his shoulders.

Gregori groaned inwardly. It was impossible to whisper around a bunch of Vamps. They could hear everything. He grasped Simone by her bony shoulders. “Let’s be honest about this, Toots. It’s not the shoes, or the gown, or the guy on the couch—”

“The name is Pennington,” the male model interrupted. “Pennington Langley, the Third. But please don’t call me Penny for short. I would hate to sound cheap.” He gave Gregori a flirtatious smile.

Suppressing a shudder, Gregori smiled back. Sheesh, the crap he put up with for his job. “Simone. I’ve seen you glide down a jillion runways as graceful as a swan. You can do this.”

She ducked her head as she pressed her hands against his chest. “All right, I’ll be honest. I-I’m afraid.”

“Afraid of what? Failure?” He winced when her steel-like nails dug into him.

“Right. Right, I knew that.” He grabbed her hands to keep her pink claws from ripping through his best suit. “What are you afraid of, then?”

Her bottom lip trembled against her fangs. “The sun will rise soon. I’m afraid of dying.”

“Sweetcakes, we die at every sunrise.”

“I mean
real
death!
La mort finale!
” She clutched his lapels with her fists. “I heard Corky’s show tonight.
Live with the Undead.
She said we’re all in grave danger!”

“You’ll be fine, Simone. You’ll be staying at Roman’s townhouse where we have guards to keep us safe.”

“Then Corky is
right
?” Simone shrieked and gave him a hard shake. “The mortal world knows about us now?”

He pried her bony fingers loose from his lapels. “Corky ought to know. She’s the one who posted the damned video.”

Three nights earlier, Corky Courrant had filmed the battle at Mount Rushmore that had climaxed with the death of her lover, the Malcontent leader, Casimir. While Gregori could understand why a woman might be a little miffed over the decapitation of her lover, he still thought Corky had severely overreacted. She’d posted the video on YouTube, claiming it was proof that vampires were real. That was an unforgivable, traitorous act in their world, and yet Corky was still employed at the Digital Vampire Network. Apparently her infamy was good for ratings.

Simone’s eyes filled with tears. “She said the mortals will hunt us down and slaughter us in our sleep!”

“Oh my God!” Pennington sprang to his feet. “Is that true?”

The boom operator glowered at him. “Don’t you watch the
Nightly News
? Stone Cauffyn said the secret is out, and it won’t be long before the mortals decide to kill us off.”

With a soft moan, Simone sank onto the carpet. Her tears, tinted with blood, left pink streaks down her gaunt cheeks. “
La mort finale.
”

Bloodfire Quest by Terry Brooks
Things Invisible to See by Nancy Willard
The Child Thief by Brom
The Vixen and the Vet by Katy Regnery
Escape The 1st Omnibus: WTF Books 1-3 by Lundy, W.J.
The Forgotten Affairs of Youth by Alexander Mccall Smith
Against the Dark by Carolyn Crane
Conspiracy Girl by Sarah Alderson
UNSTOPPABLE (Siri's Saga Book 2) by Klide, Jessika
In Control (The City Series) by Crystal Serowka