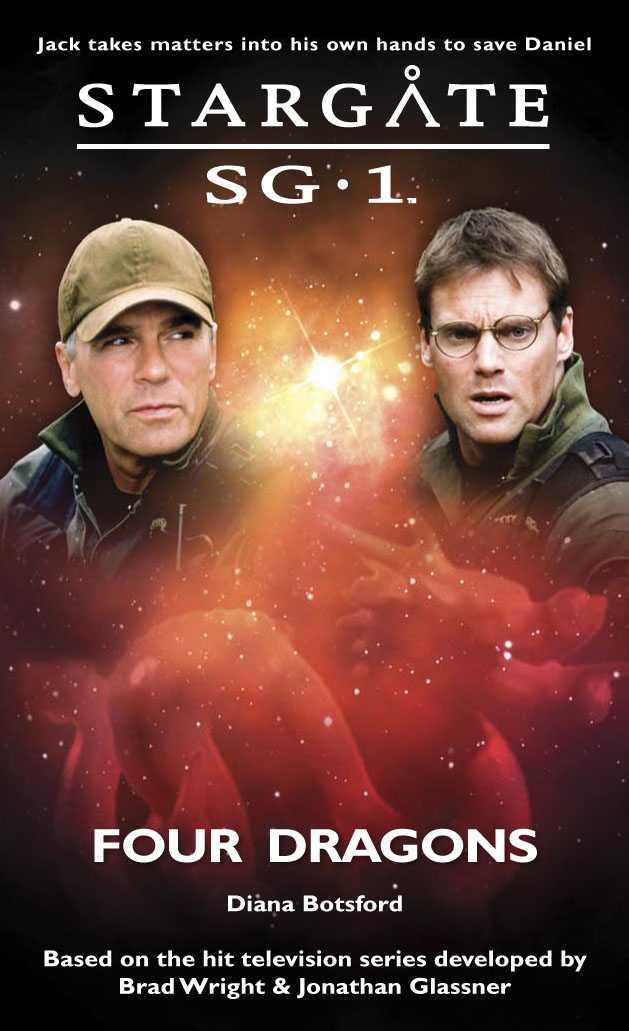 An original publication of Fandemonium Ltd, produced under license from MGM Consumer Products.

This eBook is licensed for your personal enjoyment only.  This eBook may not be re-sold or given away to other people.  If you would like to share this book with another person, please purchase an additional copy for each person you share it with.  If you're reading this book and did not purchase it, or it was not purchased for your use only, then you should return to the vendor of your choice and purchase your own copy.  Thank you for respecting the hard work of this author.

For my husband Rick,

who keeps my feet firmly planted on the ground while my head and heart travel beyond the stars.

Lindsey Allen for pushing me through the gate while Maureen, Kristin, Carol, and Trupi kept open the iris.

Sally and Tom for allowing me to play in their sandbox, and to my editor, Laura, for helping me actually keep the sand inside the box!

Capt. Angela Webb and the United States Air Force — not only for technical advice, but more importantly, for the inspiration they instill through their dedicated service.

RJ Alban for indoctrinating me into the rules of
Wéiqí
— otherwise known as Go.

Gateworld.net for its extraordinarily extensive website for all things Stargate.

The cast & crew of SG-1, including Joel Goldsmith whose music kept me joyfully planted in the Stargate universe while writing this story.

My family as well as the students & fellow faculty at Missouri State University for humoring my geekiness (is that even a word?).

And lastly, but most importantly, to Jen Brooks and Laura Gerling for their support, their edits, and their ability to keep me from slowly going nuts!

A Zippo was forever. A modern miracle. An endurable lighter, bar none.

Sure, the thing needed refueling. Sure, the flint wore out, but that was an easy fix. No need to futz. No cajoling, no arguments. Just a flick of the wheel and poof! A steady, reliable flame.

That’s what made a Zippo so damn reliable. It never tried to ascend, descend, or worse, let some overdressed, fortune-cookie style snake-in-the-head Goa’uld snatch it away. At least, not without a fight.

Jack slapped the old Zippo shut. He was positioned on the hilltop in order to stand first watch, not to feel sorry for himself… though it wasn’t like he couldn’t do both. There pretty much wasn’t anything else to do… for the moment. The sun had dropped hard and fast, but the moon was still on the rise, casting a bright, grey haze across the landscape. Any sort of covert mission would be impossible until that moon set as well.

He scanned the valley floor with his pocket scope. Ten klicks to the west, the high curved walls and copper-topped turrets of Lord Yu’s fortress jutted out from a bedrock of limestone. The whole thing was lit up like a nightmare version of that old Chinese theatre in Hollywood. Not as showy as some other snakeheads’ big, bad domains, but the effect was still the same. A giant thumb to the nose. A reminder of how Jack had most certainly screwed up.

Stupid, stupid Jack. What the hell had he been thinking? Daniel had come back, descended, returned from Oma-land less than a month ago, but Jack couldn’t let it lie. He had to push. He had to make his point. He had to piss Daniel off enough to make him an easy target for that no good, slimy, bottom-feeder, Lord Yu.

The recognizable thrum of a death glider yanked Jack from his one-man pity-fest. The ship swooped down from a terrace to one side of Yu’s not so little compound and headed north, flying parallel with a range of mountains at the valley’s far end. The glider dipped lower, raking by a pile of crammed together shacks which most likely housed Yu’s slaves.

A nice little dose of harassment to keep the folks at bay.

The glider changed course on the spin of a dime, moonlight bouncing off its arched wings as its canted bow tilted upwards. The ship climbed into the night sky, tossing gravity aside as it ascended at break-neck speed. The engines accelerated, became a high-pitched whine, and then the telltale cone of clouded air puffed up in its wake. A moment later, a sonic boom echoed off the distant mountains as the glider disappeared beyond the moon.

Carter would have rattled on about how the glider didn’t really disappear. How the naked eye can’t see objects travelling that fast without a light source. That is, if she was speaking to him. Which she wasn’t. Not that Jack blamed her.

He had no one but himself to blame.

Still, one less glider was good news. It meant one, maybe two less Jaffa. More luck in their favor when they went in to rescue Daniel.

Who was he kidding? A chimp with boxing gloves would have better luck. Still, for the amount of trouble Yu had gone to, the Goa’uld had to have a good reason, which meant maybe, just maybe, Daniel could be alive.

Ignoring the ache in his knee, Jack crouched down beside a sparse, puny-looking tree. Until that damned moon set, no one was going anywhere. Not unless SG-1 wanted a one-way trip and suicide was pretty much considered passé these days, even by him.

Suicide and Zippos. Jack snorted. He’d become his own personal walking, talking cliché. Memories could be such pains in the ass. Distracting, sneaky little bastards.

So why the hell then had he taken back Skaara’s lighter when the kid died… left for the next level of existence… went off to Oma-ville?

What was that all about?

He thumbed the wheel, half-tempted to light it up, wave it in the air. Let Yu know they were coming. But then, he didn’t really have a say on how this mission went down. Not anymore. Carter was in charge now.

Her big, blue eyes, torn between anger and regret, had pinned him down almost as badly as her last words.

Grace Under Pressure by Hyzy, Julie
Magic In The Storm by Meredith Bond
The Underside of Joy by Sere Prince Halverson
Goblins and Ghosties by Maggie Pearson
The Power of One by Jane A. Adams
The Child Inside by Suzanne Bugler
Fireworks in the Rain by Steven Brust
The Arrangement by Suzanne Forster
Jim Morrison's Adventures in the Afterlife by Mick Farren
The Graft by Martina Cole