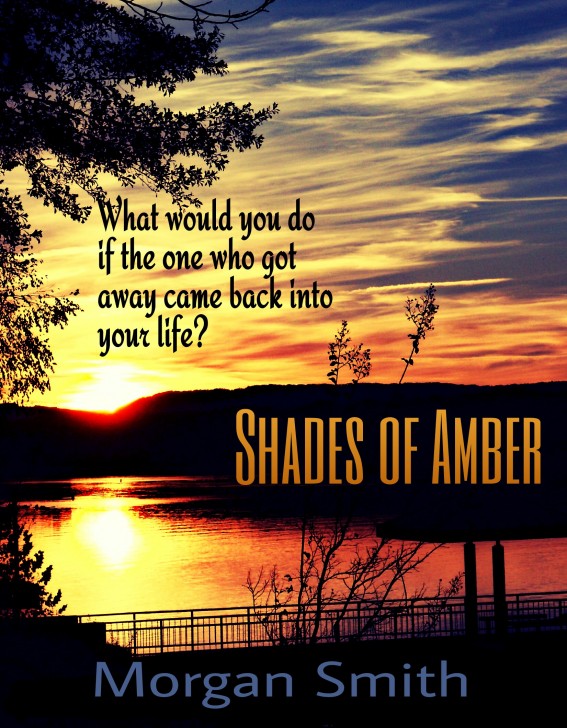 This is a work of fiction.
Any names, characters, places, and incidents are intended to
provide a sense of authenticity and are used fictitiously. Any
resemblance to actual events, establishments, locales or persons,
living or dead, is entirely coincidental.

Thank you for downloading
this free ebook. Although this is a free book, it remains the
copyrighted property of the author, and may not be reproduced,
copied or distributed for commercial or non-commercial purposes. If
you enjoyed this book, please encourage your friends to download
their own copy at Smashwords.com, where they can also discover
other works by this author. Thank you for your support.

For all of my family, my
friends, my love, and all the people who inspired me with a word or
smile.

To all the fish in this big
fish tank of a world, and to all of my friends at the Tennessee
Aquarium and Chattanooga State, you have been a fountain of
inspiration and encouragement!

Thanks to everyone who took
the time to read my drafts and all the people who were fans from
the start! Big thanks to Garrell Woods, who told me that my goals
weren’t too large. As well as a special thanks to the people who
helped edit my book: Kayla Flippo, Jake Steventon, Pete Larson,
Andrew Boyd, and Elizabeth Jane.

Every night I think of
you,

My heart, my love, my
sweetest doom.

For we are destined to be
apart,

But dare I say you stole my
heart?

You are my life,

You’ve turned me into a
human being.

You shall always
be

Lies Through the
Grapevine

A Touch of
Sapphire

I’ve tried to erase the
memory of his flesh against mine. His scent. The Creole lilt of his
words. I’d forgotten everything until now.

I focused on his smooth
hands, muscular arms, the broad chest hidden beneath a black
button-down shirt, and the thick, ebony waves that brought darkness
to his angelic face. That was how he looked the last time I saw
him.

I glanced at the ceiling,
the floor, and then back to the man in front of me.

My mind told my body to
scream, but it all boiled down to desire. I yearned to brush my
lips against his, even as his gaze tried to consume my soul. I
wanted to run, but his hand caught my wrist.

Dark locks covered one eye
as he watched me with the ghost of a smile.

It was all too
much.

I didn’t want to be there,
didn’t want to see him, but most of all, I didn’t want to be face
to face with a dead man. I twisted, trying to sever our connection,
but he held tight, his biceps straining as his other hand gripped
my arm. My heart swelled with happiness as my skin prickled with
fear. It was easier to pretend he was off trotting the globe, but
that didn’t make him alive.

The library faded,
replaced by a bustling coffee shop.

Had I really been with him
less than an hour ago?

“
Hell-o?” Faith swatted my
leg, “What’s this business about the library? Are you gonna spill
or what?”

I stopped strangling my
mug and looked around Java Mama’s. I still hadn’t processed things
completely. “Yes, sorry.” Goosebumps covered my skin as I recounted
the details up until the part where I saw his face.

Instead of correcting her,
I sipped my Macchiato and tried not to choke when she told a dirty
joke.

Once our laughter faded,
she cocked her head and said, “Why do you think Troy made a cameo
in your dream? Have you thought about him lately?”

I coughed and set my drink
on the table.

Faith was good at
lightening the mood, but sucked at reading between the
lines.

I pinched the bridge of my
nose and inhaled. “I don’t know why my wish finally came true, but
it’s too late.”

She drummed her fingers on
the armrest. “Tell me the rest.”

She rolled her eyes. “Why?
It’s beautiful out.”

“
Yeah, the leaves are
pretty, but I hate how dark it gets. I shouldn’t have stayed at the
library so late, but I had to finish my paper.”

“
After spending hours
confined to a wooden desk, I was beyond ready to go home. Thirty
minutes later, my critical analysis had been typed, proofread, and
submitted. I probably would’ve started dancing if I hadn’t seen a
light in the hallway. I waited a beat, expecting someone to enter
the room, but they didn’t. It was dark except for my section, so I
looked toward the window hoping it was still light
outside.”

I shook my head. “The glow
of a lamp caught my eye and cut off a second later, and then
someone coughed. I started to speak, but my words evaporated when I
saw dark hair and the curve of his mouth. I didn’t want to see his
eyes.

“
His nearness made
feelings of love, hate, and sorrow rush to the surface, but I
couldn’t allow myself to break. I needed to get away. As he grabbed
my arm, I stomped on his foot and let out a scream that left my
throat raw.”

Faith hugged her
shoulders. “That dream was pretty intense.”

I wish it had been a
dream.

Squeezing my eyes shut, I
tried to forget his face and the time we’d spent
together.

“
So what happened next?”
Faith asked, tracing the seam on her pant leg.

I took a bite of my cookie
and sighed. “I ran into Mrs. Simms on my way out of the room. Well,
more like barreled into her.”

I rolled my eyes. “She
laughed, but made me wait in the lobby until security came. I could
barely control my shaking as the guard led us into the room. Every
light was on. The tall, bulky man circled the table with an
impassive expression. Seconds later, he bent down and waved us
over.”

Faith gasped. “Did he find
old blood or ghostly ectoplasm?”

“
Ghostly ectoplasm?” I
pursed my lips.

How could she be familiar
with supernatural lingo, yet automatically assume I was
dreaming?

“
No, but I was unprepared
and relieved when I saw my phone on the burgundy carpet since I
didn’t know I’d lost it. As I picked it up, the librarian looked at
me like I was either insane or troublesome, and told me that the
next time I planned to spin a tale, it should be more entertaining
than a ghost who steals cell phones.”

Faith leaned forward and
rubbed my hand. “That’s one heck of a dream, Jade.”

On the way to my parents’
house, I considered the last few hours. I must have dozed off and
dreamt it. That was the only logical explanation. I was a
levelheaded person, and although I grew up watching
Dark Shadows
reruns
,
I
knew monsters didn’t really exist. By the time I pulled into the
driveway, I felt like the worst kind of silly. It was October 2. Of
course, my mind would conjure him up.

Even though I was in
desperate need of sleep, I couldn’t shake the memories as I dragged
myself from my periwinkle VW Beetle. Pausing on the sidewalk, I
looked up at my childhood home, noting just how little had changed
in the three years since I started college.

Unlocking the door, I
walked inside and flipped the light switch. I would’ve preferred a
warm hug to solitude, but my parents had taken my little brother
and sister to see my mom’s side of the family.

I wanted to skip school
and go too, but she was a stickler for safety and education. Her
instructions were clear. Check on the house, put school first. You
can come with us next time.

As if elementary school
breaks would ever line up with mine.

I closed the door, locked
the deadbolt, and peeked out the window. I hadn’t slept here in
months, not since I started renting a house closer to campus. Now,
I only came home for Sunday dinner. My feet protested as I made my
way up to my bedroom. I was too disturbed to eat, so I took off my
black boots, climbed into bed, and went to sleep.

Fuzzy images flitted
through my head until I fell into a dream, but in the middle of
diving in the Reef tank at The Aquarium, I came across a chorus
line of singing fish. How nice that they were performing my
favorite song, but then I realized it was just the ringing of my
cell phone. Sitting up, I snatched it from my
nightstand.

Who would call after
midnight, Mariah or Faith?

A chill weaved down my
spine when I saw the unknown number. I closed my eyes, wanting to
forget about the library incident, but I was almost positive it was
real, which meant this phone thing was not a
coincidence.

“
I’ve been doing so well.
Please don’t let this be the night everything goes to Hell,” I
whispered into the blanket as I cuddled my pillow.

Hours passed as I drifted
in and out of sleep. As dawn crept through the blinds, the phone
rang for the fourth time. My hand hovered over the bright screen,
ready to pick it up and shout a few choice words.

I could answer it, but
denial was so much easier.

Our love feels eternal
when I think of you,

But is it for real or
am I past due?

I turn the page on our
memories.

Just to find that the end
doesn't remedy

This feeling I get when
you're nearby...

You say you're the
same,

But I smell the
lie.

Everything about you is
magnified.

I see your destructive
side.

I decided to confide in
Amelia after a week of unknown calls and very little sleep. Telling
Faith about my “dream” should’ve been enough, but it wasn’t.
Probably because I allowed her to shrug it off like a piece of
fiction.

People bustled in and out
of the cafeteria, but no one noticed me until I pushed the door
open with a little too much force. Amelia was at a small table
reading and tapping her fingers to the beat of a silent
tune.

I eyed the worn out copy
of
Hush, Hush
,
remembering the first time I’d read it. The cover had drawn me in,
but Becca Fitzpatrick’s story proved even more intriguing than the
fallen angel on the cover. My gaze flitted to her
Maroon 5
t-shirt—my gift
for her twentieth birthday—before landing on the wall behind her. I
needed to get my thoughts in order, but my brain felt like a shaken
can of soda.

Amelia’s green eyes
widened as she tucked her short brown hair behind her ear. “Rough
night?” Her grin faded as she scrutinized the bags under my eyes.
“On second thought, you look like you haven’t slept in a
week.”

Mirror in the Forest: Book One by B. Groves
THE DAY: A Novel of America in the Last Days (The End of America Series) by John Price
The Diviner by Melanie Rawn
Save the Night for Me by Selena Sexton
Valor's Trial by Tanya Huff
Tiger Hills by Sarita Mandanna
Tell the Truth, Shame the Devil by Melina Marchetta
Steel Gauntlet by Sherman, David, Cragg, Dan
Escaping Me by Lee, Elizabeth
Let Me In by Jackson, Leigh