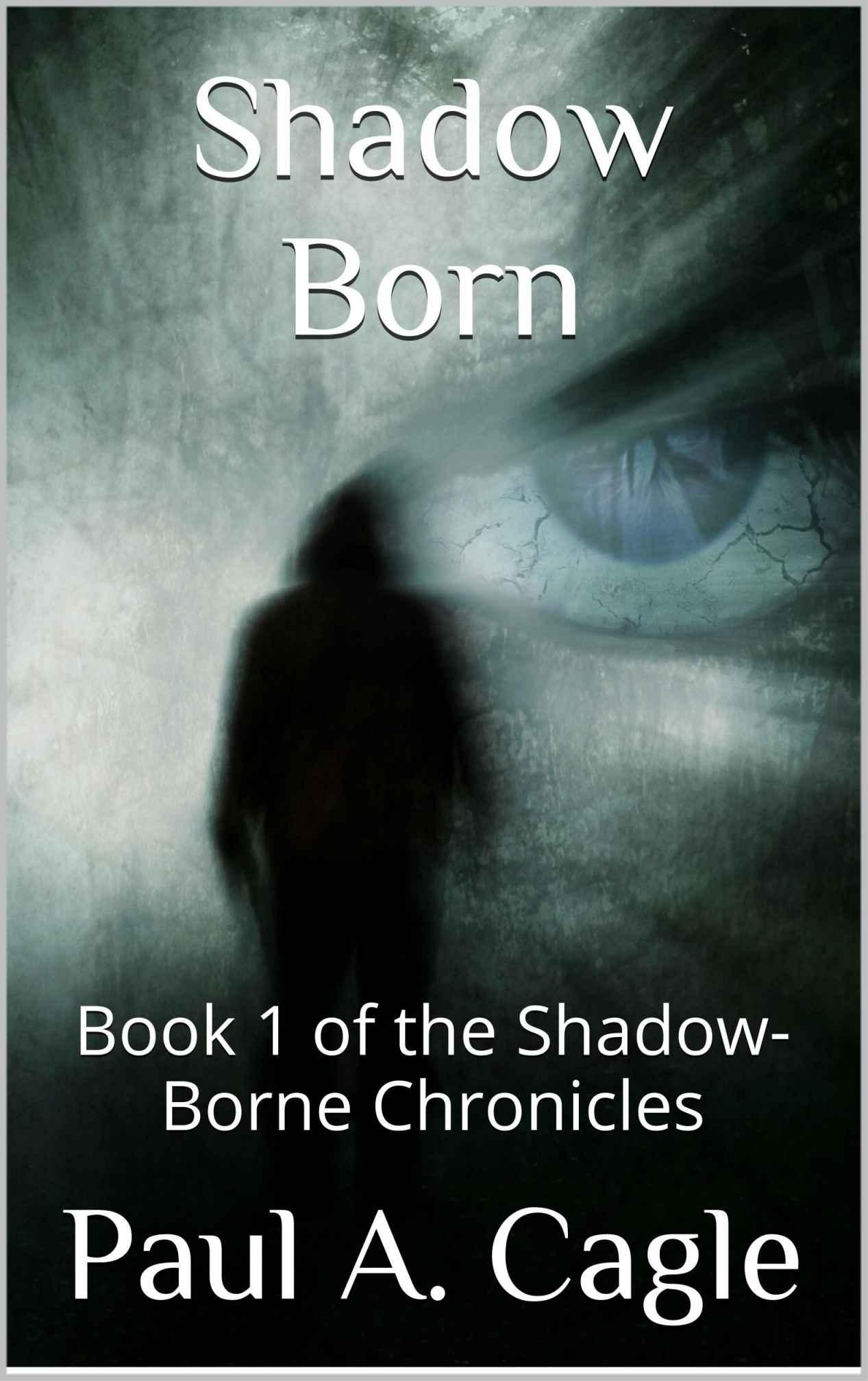 Chapter One - The Nightmare Begins

Chapter Sixteen - Decisions to be Made

Book One of the Shadow-Borne Chronicles

The scanning, uploading, and distribution of this book via the Internet or via any other means without the permission of the author is illegal and punishable by law. Please purchase only authorized electronic editions, and do not participate in or encourage electronic piracy of copyrighted materials.

If you have any questions you can email the author at
[email protected]
.

Cover art by Paul A. Cagle, graphics from
www.dreamstime.com

My mom, Angie, Caitie, Alex and Cliff for believing in me.

I would also like to say thank you to Becky Bumgardner, Julie Kurtz-Kunesh and

Roseanna Kilgore for all of their help.

I appreciate everything that you guys did!

CHAPTER ONE
The Nightmare Begins

Alec Carson lay face down in black vomit, naked and bleeding on the hardwood floor. Painful spasms wracked his trembling body with the strain of expelling the viscous, black foul-tasting fluid.

His dark blonde hair was matted down with it on his left side and the thick fluid was warm and sticky against his face and bare chest.

His wrists were raw and swollen.

They were an angry red from where they’d been tied painfully tight and then slashed open with a wickedly sharp knife.

His abductor had taken him directly from the dark parking lot where he’d been walking back to his car after a long day of shopping for school supplies and grabbing a burger.

The young man’s vision blurred and swam and he had trouble focusing his eyes.

His body burned like he was being ripped up inside and he felt feverishly hot.

He could barely breathe from all the pressure building up inside him, and between painful spasms he was gasping for precious air.

Even his bones hurt.

He felt like there was a huge hammer pulverizing them and grinding them down to dust.

Every part of his body felt like it was being torn apart, cell by cell.

His vision was beginning to darken around the edges and dark spots throbbed before his eyes with his struggling heartbeat.

He was going to die here naked and alone.

He had awoken after his abduction naked and tied hand and foot to a chair, his wrists tied so tightly he could barely feel his hands.

He had tried to get free, the terror of the situation evident in his manic attempts to break the ropes binding him, but it had done no good.

After a few minutes of screaming for help and attempting to topple the huge heavy chair in an effort to break it apart, to no avail, a door opened to his left.

Alec didn’t want to turn to look, his whole body shaking from the strain of trying to break loose and no small amount of fear.

Alec caught movement from the corner of his eye and finally turned his head and saw that to his left stood one of the most beautiful women that he had ever laid eyes on.

Her dark red hair was worn straight, and easily fell to the middle of her back.

Her skin was pale and she almost looked like a beautiful porcelain doll with her blood red bow-shaped lips.

Her face was devoid of emotion and she stood there a moment as if in a trance.

She wore an open black silk robe with nothing underneath.

Her breasts and torso were the same flawless porcelain as her face.

The woman finally seemed to remember why she’d entered the room and turned her head slowly to look at Alec.

That’s when the true terror set in.

Her emerald eyes were devoid of any shred of humanity and there was a manic gleam in them that told Alec that he wasn’t going to make it out of this alive.

He started crying and begging for his life.

He wasn’t even aware of what he was saying but he was gibbering in fear and begging to be set free.

The woman acted as though she didn’t hear him and picked up a knife and a crystal bowl from a table by the wall and slowly walked to where Alec was tied.

“Please don’t do this,” he cried, but the woman ignored his plea.

Please don’t hurt me,” he sobbed.

The woman, chanting quietly under her breath, brought the knife down and slashed Alec’s wrists causing him to scream and writhe in pain.

His cries grew weaker as he was bled several times over the course of an hour, and finally, thankfully, he passed out.

When he awoke, the crazy woman had moved him into a different room, tied him to an altar and forced him to drink blood that had either been poisoned or laced with something that was tearing up his insides like razor wire shredded skin.

He wanted to wake up from this nightmare in the safety of his own bed, but the pain coursing through his body let him know this was no dream.

After he’d passed out again, he’d woken up on the floor, wrists untied but throbbing and his body feeling like it was on fire.

That’s when the vomiting had started.

Alec tried calling for help but every time he opened his mouth to scream, his body would seize and he’d vomit up more of the foul black liquid.

Terror had a firm grip on his heart, squeezing what little hope Alec had out of him.

He told his body to move, tried to force it to do something, but his attempts were feeble, only causing his limbs to spasm sporadically, almost like a fish on dry land.

Every time his muscles trembled it brought another fresh round of agony clawing through his body.

He wanted to ball up in the fetal position, wanted to cover his nakedness, but his body would not obey.

Tears ran in hot streams down his face as Alec lay there whimpering and praying for some sort of help.

He blacked out for a couple of seconds and was convinced he was hallucinating from blood loss until he heard the voices getting closer.

He attempted to cry out, to move or do something that would draw attention to himself, but the attempt only brought a fresh wave of searing agony ripping through his body.

His chest was still on fire and his muscles felt as if thousands of volts of electricity were sizzling through every muscle fiber and nerve ending.

All he could do was lay there in excruciating pain.

From his vantage point on the floor he saw several pairs of black military boots running through his field of vision.

One set of boots remained close to Alec but the others disappeared further into the room.

There was some sort of communication between the booted people but Alec couldn’t quite make it out.

He thought one of them had said something about the
other
men in the room being dead, but he wasn’t quite sure.

“This one is close,” Alec heard the man standing above him say.

He wanted to shout for help, he wanted the man to make the pain stop and to take him away from this hell but he couldn’t make his mouth work.

More words were exchanged quietly in the room but the ringing in Alec’s ears was getting worse and caused him to completely miss what was being said.

From across the room Alec heard voices raised and arguing.

The booted men were confronting his captor.

Alec would have whooped with joy if he’d had the strength.

The woman’s voice, his captor, was raised in anger and it sounded like she was shouting curses and obscenities at the man she was arguing with.

The man was talking a little bit softer, like he was trying to explain something to the woman but she kept screaming and cursing making it difficult for him to get a word in.

A surge of panic ran through him.

He’d bled too much and his heart was about to stop.

Without warning Alec heard a loud crash. It sounded like someone was throwing the contents of the room around and smashing all of the furniture against the walls.

And then there was silence.

It didn’t last long because Alec heard the woman yelling again, only this time it sounded like she was pleading.

In mid-sentence her words changed and turned into a horrible piercing scream that sent shivers down his spine.

Then it was quiet once more.

Alec was pretty sure the woman had been killed.

Served her right for what she’d done to him.

He fervently hoped he was being rescued and that this nightmare was over.

Slowly all the pain in Alec’s body subsided, including the chest pains that had been squeezing his heart.

He laid trembling and moaning on the floor, gasping for air.

Instead of feeling like he was attached to a live wire, he only felt bruised and battered.

Every part of him hurt, but nothing like it had moments earlier.

He didn’t have control over his body but at least he wasn’t in agony any longer.

He might, in spite of his abductor and what she’d done to him, survive this after all.

He felt a little hopeful for the first time in what seemed like forever.

A moment later however, the black military boots rushed past where Alec was laying and a loud boom sounded from across the room.

Debris and cinders rained down on Alec’s naked, unprotected body and he could feel a great amount of heat wash over him.

Something had exploded and now the place was on fire.

Didn’t they know that Alec was still alive?

They had to have known.

His mind screamed in helpless frustration, begging the men to come back and take him with them.

Soon the heat was unbearable and Alec could feel the skin on his left arm start to sting and then tighten.

He was really going to die here, if not from the poison he’d been given, then by being burned alive.

It was so
unfair
.

It was unexpected but he decided to use it.

Slowly, inch by inch Alec pulled himself away from the fire.

He didn’t know where he was going but he knew he didn’t want to be anywhere near the flames.

Come, Barbarians by Todd Babiak
A Short History of Richard Kline by Amanda Lohrey
Connections by Jacqueline Wein
Strangers When We Meet by Marisa Carroll
Requiem for Moses by William X. Kienzle
The Demure Bride by Joannie Kay
Hamish X and the Cheese Pirates by Sean Cullen
Crime at Christmas by Jack Adrian (ed)
Silent Valley by Malla Nunn
The Member of the Wedding by Carson McCullers