Read She Died Too Young Online

She Died Too Young 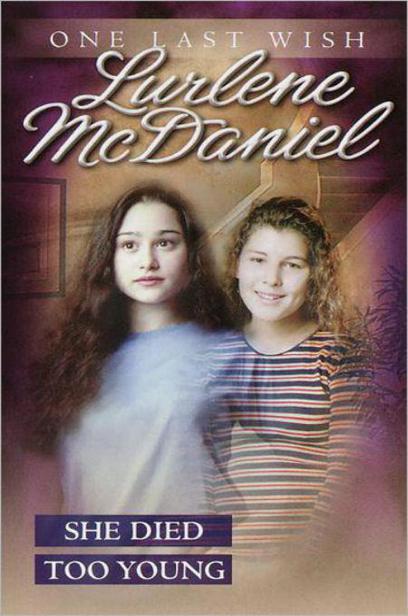 “Don’t you see? There’s one donor coming in. Only one. Who will the doctors save? Who will get the transplant?”

For a moment Josh stared blankly as her question sank in. “Katie, you don’t know for sure there’s only one donor.”

“Yes, I do. There’s only one. One heart. Two lungs. The doctor said the donor’s family had given permission for all her organs to be donated.” Katie’s voice had risen with the tide of panic rising in her. “There’re two people in need and only one heart.”

FREEDOM BEYOND THE SEA,
Waldtraut Lewin

THE RANSOM OF MERCY CARTER,
Caroline B. Cooney

All rights reserved. No part of this book may be reproduced or transmitted in any form or by any means, electronic or mechanical, including photocopying, recording, or by any information storage and retrieval system, without the written permission of the publisher, except where permitted by law.
For information address Random House, Inc.

Dell and Laurel are registered trademarks of Random House, Inc.

I would like to express my gratitude to
Tennessee Donor Services
,
whose valuable input helped
in the creation of this manuscript

To
B.C.H.
Thank you for the beautiful music
.

K
ATIE
O
’ROARK WATCHED
her boyfriend, Josh Martel, read through her friend Chelsea James’s letter. They were sitting in a wicker swing on her front porch in the warm September afternoon.

I’m writing to you from the hospital. The first thing my doctor did when I got home from Jenny House last week was admit me. Some homecoming. Of course, it wasn’t a big surprise. I told you just before we left it was what I thought he’d do. But it sure isn’t any fun
.

They’re running all sorts of tests (again!), but I know the results already: My poor old heart is plain old tired. I’ve tried telling it that we’re both
only fifteen and it has no right to poop out on me, hut it’s not listening. I’m on oxygen, and until yesterday I was spiking a fever. They’ve got the fever under control now, thank you very much. My parents are worried and trying to act brave, but they’re driving me crazy
.

It’s looking more and more like I’ll be a candidate for a heart transplant. Of course, I’m scared, but after having met you this summer, I know that a new heart is my only hope for a normal life. Just look at you. New heart. New life. Who knows, maybe I’ll even give you some competition on the track once I get the transplant. (Just kidding—I’ve never run a single day in my life thanks to my bum heart. Why start now?)

If there’s a bright spot in this whole thing—See how I learned to think positively over the summer? You and Amanda taught me positive thinking—it’s that I’ll be coming to Ann Arbor once I go on the beeper for a transplant. Which puts me in the same city as you. I can’t tell you how much that gives me courage. Knowing that I won’t have to go through this thing alone
.

So just as soon as I know what’s going on, I’ll contact you. Hope you got started back in school without any problems. Lucky you! A senior and all. I may not ever get to run a foot race, but maybe at long last, I’ll get to attend a real school and have a real life. Bye for now. Say hi to Josh for me
.

I’ve written this news to Lacey too, but who knows how she’ll take it? You know Lacey—she’s
not keen on sick people even though her diabetes makes her one of us
.

As he handed the letter back to Katie, she said, “I know exactly what she’s going through. I’m writing her today. As soon as she comes to Ann Arbor, I’ll be by her side every minute.”

His words stung Katie. “What’s that supposed to mean? I’m surprised you’d say such a thing. She’s my friend. I can’t abandon her.”

“I’m not asking you to. But, Katie, it’s been a long summer with you away. Now that school’s started, I want things back to normal for us. Dates. Fun.”

Although she thought Josh was acting selfish, she didn’t want to have an argument with him. “Don’t worry, we’ll get back to normal,” she answered. “But you know how important Chelsea is to me. I don’t think I could stand it if she …” Katie didn’t finish her sentence, as tears pooled in her eyes.

Josh put his arm around her and pulled her against his chest. “Chelsea won’t be like Amanda,” he said. “She’s going to come through this with flying colors. You’ll see.”

“I guess I’m not over Amanda,” she admitted. “I thought that coming home and starting school would make the hurt go away, but it hasn’t.”

“I know. You stuff it down inside, but then when you least expect it, it sneaks out and smacks you square in the face.”

Of course, Josh knows
, Katie thought. His brother, Aaron, had died right in front of his eyes only two years before.

Josh lifted her chin and gazed at her face. “I miss Aaron every day, and on days when I’m having too much fun, I start to feel guilty because he’s not alive to have fun too. I have to really watch that I don’t get morbid. Knowing his heart’s inside you helps.” Josh hugged her hard. “You’ll always miss Amanda, but you can’t let it take over your life.”

She knew what he said was true. “I wonder what it would be like to be like the other kids at our high school—the ones who don’t have to worry about dying, or watching their friends die.”

“You mean worry about grades or who’s going to win the football game?” The corners of his eyes crinkled as he teased.

“Or who’s going to ask whom to the homecoming dance,” Katie joked.

“No worry there. You’ve already got a date,” he said, and kissed the tip of her nose. “As I see it, Katie, my love, you only have to figure out where you’re going to college. Any progress?”

Another touchy subject
, she thought. Just that morning she’d had a confrontation with her parents about it. They wanted her to attend the University of Michigan and live at home next year. But she wanted a track scholarship, and that could
mean going to a college far away. “No. I’m sending off a letter to that track coach I met at the Transplant Games two summers ago. You remember him? His son had had a kidney transplant.”

“I remember him. Arizona, wasn’t it?” Josh looked glum. “You know how I feel about it. I want you nearby. I mean, there’s no way I can go away to college—too expensive, and my grades aren’t exactly merit scholarship material. I have to stay here for college, live with Gramps, and work. There’s no other way.”

Katie felt the now familiar twinge of guilt. Going away to college meant leaving Josh, her family, and her medical support staff. But her cardiologist had told her that her transplanted heart was in fine shape, and as long as she took her antirejection medications and took care of herself, she could continue doing well. “No one’s offered me a scholarship, so I may have to stay put.”

“You could go if you want to,” Josh said. “You still have some of your One Last Wish money.”

That was true. A portion of the one hundred thousand dollars was socked away in the bank. Now that Katie knew the identity of her benefactor, a girl named Jennifer Warren Crawford, who’d died in 1978 after setting up the One Last Wish Foundation, the origin of the money she’d been given was no longer a mystery. “That money may have to go toward keeping me in my medications,” she told Josh. “Dad’s medical benefits from his health insurance have a cap and will run out
someday. Then I’ll have to pay for my medications some other way.”

“You’ll earn a fortune being the top female runner in the country.”

“Is that why you love me? Because of my money?” she teased, hoping to distract him from questioning her about college. She didn’t know what she was going to do, and she was weary of thinking about it. Right now, she had Chelsea and her medical problems on the brain. Plus starting school. And the loss of Amanda.

Josh grinned. “That’s what turns me on about you all right. All that money.”

He snuggled against her neck, and goose bumps skidded up her spine. “The neighbors might be watching,” she said.

“Let them watch,” Josh replied, and kissed her softly on the mouth.

Katie felt her stomach lurch. With the phone receiver clamped to her ear, she sprawled across her bed. “When are you coming?”

“Mom’s making a mountain of arrangements now. She’s coming with me while Dad holds down the fort. He’ll visit every weekend he can, but somebody’s got to stay and work and pay the bills.”

Katie heard the anxiety in her friend’s voice. “I’ll be here for you. And so will Josh.”

“That’s the only good part of this whole thing. The worst is not knowing how long I’ll have to wait for my transplant. My doctor says the average wait is close to six months for a heart.”

The information surprised Katie. She’d been much luckier—if she could think of Aaron’s death as a piece of luck. Her wait hadn’t been long at all. She forced her thoughts away from that course. Nothing could bring Aaron back, and she was grateful to be alive. “Maybe you won’t have to wait that long,” she offered hopefully.

The Green-Eyed Doll by Jerrie Alexander
Her Alien Masters by Ann Jacobs
Chasing Darkness by Danielle Girard
Interim Goddess of Love by Mina V. Esguerra
Killing Game (Veritas Book 2) by Chandler Steele
Honor Crowned by Michael G. Southwick
Enticing An Angel by Leo Charles Taylor
The Nanny with the Skull Tattoos by Elizabeth Barone
Crossing the Line Part One (A Novella) by Samantha Long
Pins: A Novel by Jim Provenzano