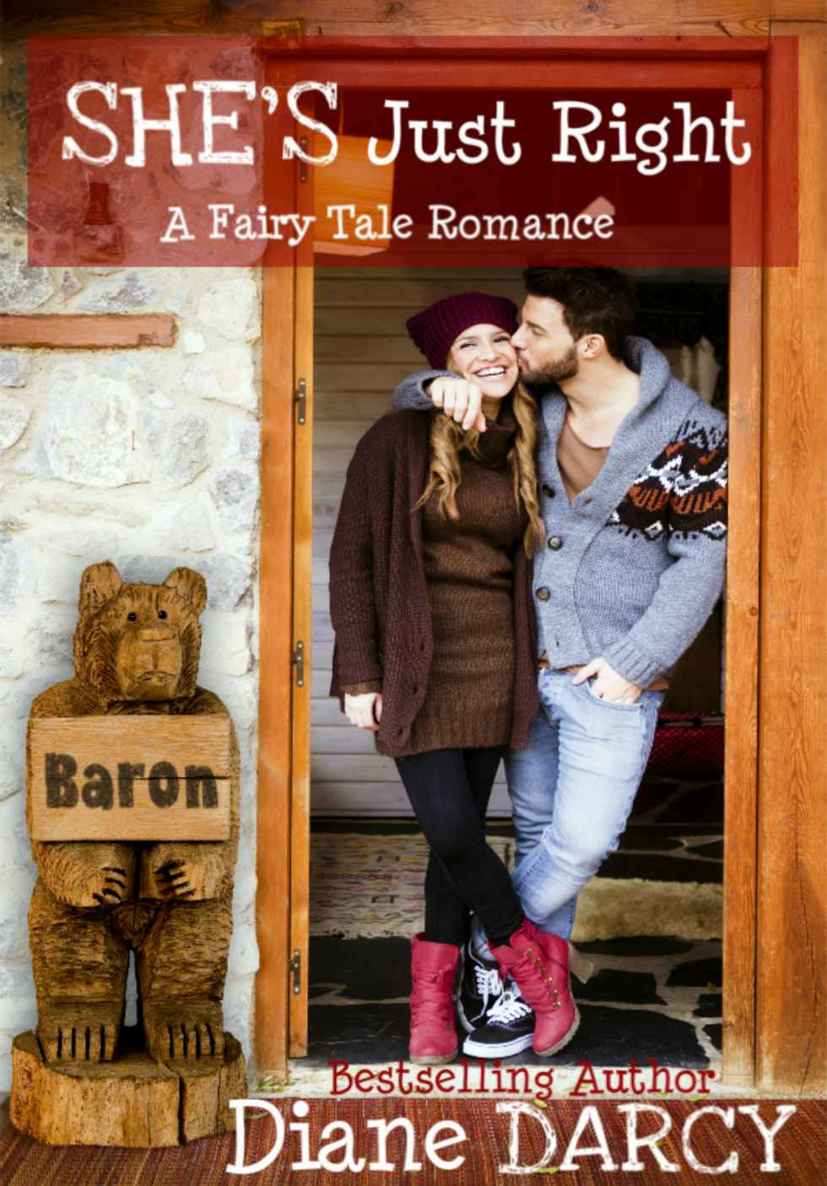 Contents
She's Just Right
by
Diane Darcy
Copyright © 2011 by Diane Darcy
www.dianedarcy.com
This book is a work of fiction. The names, characters, places, and incidents are products of the writer’s imagination or have been used fictitiously and are not to be construed as real. Any resemblance to persons, living or dead, actual events, locales or organizations is entirely coincidental. All rights reserved. No part of this book may be reproduced, scanned, or distributed in any manner whatsoever without written permission from the author except in the case of brief quotation embodied in critical articles and reviews.
Cover art by Kaylee Young
Dedication:
For Melody Chase, who likes fairy tales as much as I do. Love you, Sis.
And also for Brent, who sometimes seems confused by the need, but lets me drag him to bookstores anyway.
Book Description: She's Just Right
Someone's been sleeping in his bed...

Once upon a time, golden-haired realtor Honey Stevens fought with her fiancé before leaving for a three-week business trip to a small Northern California town. Following a map to the cabin in the woods where her important clients insist she stay, she goes inside, and--as instructed--makes herself at home to await their arrival. What she doesn't know is that some local boys, intent on revenge, tampered with the house numbers and she’s at the wrong place!

Divorced game warden Trevor Baron comes home after a long, hard day on the job in desperate need of peace, quiet, and a good hot meal. Instead he finds someone has been eating his dinner, breaking his chair, and sleeping in his bed.

It doesn’t take long for Honey to realize the wrong man is capturing her heart. The question is, can Trevor let go of the past enough to let his own heart out of hibernation?

When did Happily Ever After become so complicated?
Chapter One
By the light of the moon Dylan Eley led, and his best friends Isaac and Seth followed as they crept through the trees toward the log cabin house.
It was cold, the trees were spooky, and when a noise sounded behind, a rustle in the foliage, Isaac sucked in a harsh breath. “It’s
Him
!” he whispered. “He’s found us!”
Dylan swallowed, his heart pounded, and his grip tightened on the hammer in his hand. He turned to scowl at his friend. “No, it’s not. We’re practically in the country, right? It’s a stray cat or a skunk or something. Besides, we rode our bikes past that building he was fixing in town, remember?” His voice wavered slightly and he knew he was trying to convince himself as well as his friends. “Let’s keep going.”
Seth started to wheeze and Dylan stopped again, turned, and put a finger to his mouth. “Shh.”
His expression serious, the moonlight glinting off round-framed glasses, Seth pulled out his inhaler, sucked medicine in, held his breath, and nodded.
Dylan sighed. His friends looked as spooked as he felt. “Come on. We can do this. We’re twelve now, right? School’s almost out for the summer so we’re practically seventh graders. We’re not afraid, right?”
After a moment Seth nodded.
“I won’t be twelve ‘til July,” mumbled Isaac.
Dylan snorted. “Close enough. Now, come on.”
A dog barked nearby, then stopped. Dylan listened for a moment, then started forward again. Thankfully, the dog was fenced, or it would’ve come after them by now. Goosebumps rose on his arms as he considered the disaster that could have been. Any dog belonging to the game warden would be extremely dangerous.
Moments later they rounded trees and bushes to peer down a gravel driveway. “He’s not here,” whispered Dylan. “The truck’s gone and the house is dark.”
Headlights flashed in the distance as a car drove toward them, and they dove back into the trees, held their breath, and waited.
The car went by, and Dylan’s sigh was heartfelt. Unreasonable as it was, he was convinced that if
He
were around,
He
would find them no matter where they hid.
Sneaking out to the front of the driveway they stood under the hanging sign and Dylan read the name.
Baron
. He shivered, which made him angry and, lips tightening, he hurried forward.
Lifting the hammer, he wedged the claw onto one of the house numbers attached to the wooden post. He pulled and it popped off easier than he’d thought it would. He made quick work of the other three numbers and Isaac and Seth gathered the fallen pieces of metal and threw them into the bushes.
“We did it,” breathed Seth.
Isaac grinned. “Yeah! We finally showed him!”
Exhilarated, his heart pounding in his chest, Dylan smiled, nodded, and considered kicking over the large, carved, wooden-bear statue beside the mailbox.
Another car advanced down the long road and the light caught them.
“It’s
Him
!” Isaac choked. “
It’s the game warden
!”
Even though there was no way Isaac could be certain, Dylan completely believed him. Explosive fear charged through his gut. “
Run
!” he said to his friends. “
If he catches us, we’re dead! Run!
”