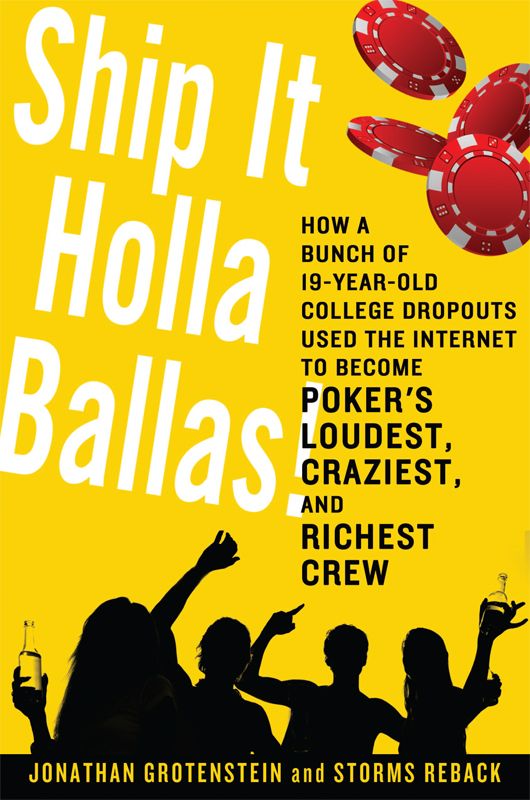 For Kristen and Nissa, and Jack, Sam, and Zephyr

1. In poker, an exclamation made after winning a big pot.

2. The affirmation of a suggested act of extreme awesomeness.

This is a true story, though some names and details have been changed.

For reasons that had little to do with taxes, April 15, 2011, was not a good day to be an online poker player in the United States of America—a group that, at the time, numbered somewhere between 2.5 million and 15 million people. Those who tried to log on to any of the biggest virtual cardrooms that Friday morning were greeted by official government seals and an ominous message: “This domain name has been seized by the Federal Bureau of Investigation.”

While smoke had been in the air for a while, the shutdown had come without warning. Americans were suddenly unable to access the money in their online accounts, which in some cases meant several million dollars. More than 12,000 players rushed to Two Plus Two, a Web site that’s home to the world’s largest and most respected poker forum, looking for answers. The unexpected spike in traffic crashed the site’s servers, further rattling the poker community.

Slowly information began to emerge. The Department of Justice had shut down the dot-com Internet addresses of the four largest sites in the world—PokerStars, Full Tilt Poker, Absolute Poker, and Ultimate Bet—alleging violations of the Illegal Gambling Business Act of 1955 and the Unlawful Internet Gambling Enforcement Act (UIGEA) of 2006. At least $500 million was frozen in seventy-five bank accounts across fourteen countries. Eleven people, poker site executives and the payment processors who brokered the transactions between the sites and players, were arrested and charged with bank fraud, money laundering, and illegal gambling.

With the exception of a few small rogue sites, “Black Friday” meant the end of online poker in the United States.

For the previous eight years—ever since an amateur named Chris Moneymaker upset the pros and won the World Series of Poker (WSOP) in 2003—America had been gripped by a poker craze. Televised tournaments filled the airwaves. The World Series had grown by a multiple of ten, one year awarding its winner $12 million—the largest payout ever given to an individual winner of a sporting event.

On Black Friday it became apparent just how much this craze owed to the multibillion-dollar online poker industry. The two biggest virtual cardrooms—PokerStars and Full Tilt Poker—had been spending $200 million each year in the United States on marketing and were the primary advertisers on poker-centric television shows like
Poker After Dark
,
The Big Game
, and
Million Dollar Challenge
. All three shows were quickly canceled. Sports giant ESPN immediately removed all of PokerStars’ advertising from its Web site, ending a relationship that had been generating $22 million a year. ESPN also scratched plans to broadcast the 2011 North American Poker Tour, a series of big money tournaments that PokerStars had created the year before. Even the future of the World Series, the game’s oldest and most prestigious tournament, grew murky: Moneymaker’s victory may have lit the fire, but the explosion was fueled by the tens of thousands of entrants who qualified through online satellite tournaments and a singularly successful TV relationship with ESPN, which was strongly considering getting out of the poker business altogether.

The end of online poker also allowed for some perspective. The phenomenon that had kept millions of players enthralled for more than a decade could now be viewed as a historical event.

In many ways, online poker resembled a gold rush or investment bubble: Fortunes were made, sometimes literally overnight, and lost just as quickly. In other ways, it was a new twist on an old game, like day trading—a technological breakthrough that changed the preexisting paradigm, allowing its early adopters to pursue some form of the American dream while sitting in front of a computer in their bathrobes.

But what made the online poker craze truly unique was the extent to which it was powered by kids. You have to be twenty-one to gamble legally in the United States, but the online cardrooms—most of which were based overseas—allowed eighteen-year-olds to try their luck. At the peak of the boom, one out of every five college students was playing poker on the Internet. A significant number of even younger teens were able to bluff their way in as well.

The results were occasionally disastrous. An estimated one-quarter of the college players exhibited the kind of clinical symptoms that define problem gamblers. Many of them dropped out of school to play professionally, only to descend into financial ruin. Some even resorted to stealing money—typically from other players but in one notable case from a bank—to help fund their poker habits.

But poker is a zero-sum game—if there are losers, there are going to be winners—and college-age kids were in many ways the ones best positioned to take advantage of the opportunity. This was, after all, the first generation to have grown up with computer mice in their hands, making them ideally suited to the rapid-fire pace of online play. They were comfortable with the idea of spending hours playing a game on a screen and had copious free time to develop skills and strategies. Not surprisingly, some of them were wildly successful, creating a new economic caste of seventeen- and eighteen-year-olds suddenly bestowed with immediate riches.

Like many winners of the Mega Millions, these kids were ill-equipped to handle their success. They were earning too much to relate to their age-peers, and taking on too much risk to win the approval of their parents and teachers. Many of them were social misfits to begin with, the kind of teenagers you’d expect to latch on to the idea of spending most of their waking hours playing a computer game. In other eras they might have lived strange lives in relative isolation. But thanks to the Internet’s evolution into the most powerful social networking tool in history, these kids were able to find one other. Through text messages and e-mails, discussion forums, and online chat, they formed powerful relationships that ultimately flourished into a full-on subculture with its own language, fashion, and customs.

In many cases their immersion into instant wealth coincided with living on their own for the first time, leaving a serious void in the whole authority figure department. These kids had the money and freedom to pursue a fantasy cobbled together from rap videos and late-night Cinemax. They developed expensive tastes and partied like rock stars around the world, dropping massive sums on bottle service, strip clubs, party drugs, fast cars, and the replacement cost of whatever property got destroyed along the way. The discovery of like-minds with similarly disposable income helped to reinforce and amplify the bad behavior.

But the connections weren’t always negative. Some formed loose tribes that shared advice, support, and money. In the absence of adult supervision, they helped one another navigate the oftentimes treacherous waters of postadolescence and, eventually, mature into actual adults themselves.

The Ship It Holla Ballas were one of these communities, a loosely affiliated group of seventeen- to twenty-two-year-olds who chose their name to incite a reaction. You were either in on the joke or you weren’t. The Ballas were young, rich, brash, arrogant, and, thanks to the pervasive media culture that raised them, remarkably self-aware. They knew the Internet wasn’t just a tool for making money, but a place to create a reputation for themselves, defining and celebrating a new lifestyle that just a few years earlier never could have existed. They used it as a platform to wage war against the social idiosyncrasies that had previously defined them, the parents and teachers who doubted them, and a poker establishment that refused to take them seriously.

This is their story.

During this rigorous time in my life, several thoughts went through my mind: That chick is so hot. This bud is so sticky. This class is so lame. I want a beer. We should go surfing.

Irieguy has seen plenty of gambles in his life. It’s never taken much to convince him to bet all the money in his wallet on a football game or on the number of push-ups he can do in a day.

But this is the first wager that could conceivably be described as life or death, and he’d certainly prefer something better than fifty-fifty odds.

Maybe “life or death” is exaggerating the case. Then again, maybe not. Heads, he spends the next year and a half administering pap smears among the yuccas and Joshua trees of the California high desert. Tails, he’s going to war. And Irieguy isn’t exactly what you’d call “soldier material.”

In fact, he’s very nearly the embodiment of peace and love, a textbook California kid from Orange County who’s about as laid-back as they come. Much of his don’t-worry-be-happy personality can be traced to his father, SkipperBob, who earned his nickname during the seventies, when he bought the Newport Harbor Yacht Club and ran the place like a singles bar.

For college, Irieguy trades one hot spot of mellow for another, leaving the O.C. for Malibu. He spends four years at Pepperdine trying to perfect his Jeff Spicoli imitation. Waking and baking nearly every single day. Surfing, ideally when the tides coincide with the university’s mandatory religion class. Drinking beer. Chasing girls. Drinking more beer.