Read Churchill's Empire: The World That Made Him and the World He Made Online

Churchill's Empire: The World That Made Him and the World He Made

BOOK: Churchill's Empire: The World That Made Him and the World He Made
>>DOWNLOAD HERE >>READ ONLINE NOW
ads 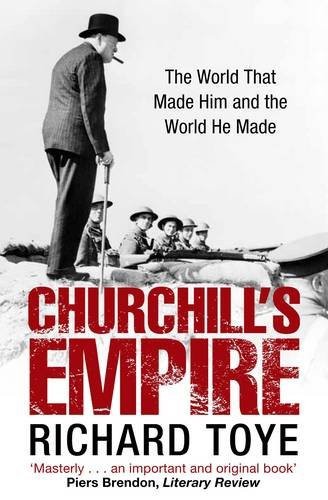 The World That Made Him and the World He Made

are registered trademarks of Henry Holt and Company, LLC.

Originally published in Great Britain in 2010 by Pan Macmillan

The acknowledgements on page 424 constitute an extension of this copyright page.

Churchill’s empire: the world that made him and the world he made / Richard Toye.—1st ed.

On 10 December 1954 a visitor from East Africa was waiting on a horsehair sofa in the hallway of 10 Downing Street. Suddenly, the small, frail figure of Winston Churchill appeared from behind a screen, said, ‘Good afternoon, Mr Blundell,’ and offered him a slightly stiffened hand to shake. The two men went together into the Cabinet Room. It was only three o’clock but Churchill – smoking his customary cigar – ordered them both a strong whisky and soda. As they sipped their drinks, their meeting, scheduled to take fifteen minutes, spilled out to last forty-five. The topic was the Mau Mau rebellion against British colonial rule in Kenya; and Michael Blundell, a prominent white settler with a somewhat spurious reputation as a liberal, was given an impassioned exposition of the Prime Minister’s views.

Churchill began by recalling his own visit to the country in 1907. Then, he had found the Kikuyu group, from which most of the rebels were now drawn, to be ‘a happy, naked and charming people’. He professed himself ‘astonished at the change which had come over their minds’. He became animated over the problem of how settlers might be protected from attack, and he poured out a flood of ideas designed to defend farmers: trip-wires, bells and other early warning systems. But in his view the issue was not really a military one – the problem was to get to the rebels’ minds. His eyes grew tearful as he told Blundell of the threat the situation posed to Britain’s good name in the world. It was terrible that the country that was the home of culture, magnanimity and democracy should be using force to suppress Mau Mau. ‘It’s the power of a modern nation being used to kill savages. It’s pretty terrible,’ he declared. ‘Savages, savages? Not savages. They’re savages armed with ideas – much more difficult to deal with.’

Over and again he pressed on a reluctant Blundell the need for negotiation, arguing that the strength of the hold the Mau Mau had on the Kikuyu proved that the latter were not primitive, stupid and cowardly, as was often imagined. Rather, ‘they were persons of considerable fibre and ability and steel, who could be brought to our side by just and wise treatment’. He offered an analogy with his own role in finding a solution for the problem of Ireland after World War I, when he had negotiated with the nationalist leader Michael Collins, once a hard-line terrorist opponent of the British. Churchill also deplored British brutality against the Kenyan rebels and the fact that so many of the local population were locked up in detention camps, before offering his views on race relations. He was old-fashioned, he said, and ‘did not really think that black people were as capable or as efficient as white people’. All the same, ‘If I meet a black man and he’s a civilized educated fellow I have no feelings about him at all.’ He showed some scepticism about the white settlers too, ‘a highly individualistic and difficult people’, although he put some of their attitude down to ‘tension from the altitude’ in the highland areas in which they lived. When Blundell asked him for a message of encouragement to pass on to them, he declined, but, as his visitor got up to leave, Churchill assured him that he was on the right path and had his support. Blundell wished him a slightly belated happy eightieth birthday, and the Prime Minister looked greatly touched. He was beginning to feel his age, he said. Then he revealed a secret that had been kept from the outside world: ‘Hm. I’ve had two strokes. Most people don’t know that, but it’s a fact. I keep going.’ Blundell deduced that this accounted for the stiffened handshake at the beginning. Churchill walked him to the exit of the room and then, when Blundell had gone about five steps into the hall, wished him goodbye and good luck.
1

This conversation did not mark any great turning point in the history of Kenya. Churchill, just months from retirement, was no longer in a position to be a major influence on colonial policy. Nevertheless, it was highly revealing of his attitudes to race and Empire, touching numerous themes that had been present throughout his career. There were so many familiar hallmarks: the gift for a phrase (‘savages armed with ideas’), the recollection of a happier, more innocent past, the emphasis on magnanimity and negotiating from strength. Also familiar was his unashamed belief in white superiority, a conviction which, for him, however, did not lessen the need to act humanely towards supposedly inferior races that might, in their own way, be worthy of admiration. Recognizable as part of this was his opinion that members of these races might earn equal treatment, if not exactly warm acceptance, provided they reached an approved cultural standard: a ‘civilized educated’ black man would provoke ‘no feelings’ in him. Overall, the striking thing is the complexity of his opinions. He emerges from Blundell’s account of the discussion as a holder of racist views but not as an imperial diehard. He comes across in his plea for peace talks as a thoughtful visionary, but also, in his description of the formerly ‘happy, naked’ Kikuyu, as curiously naïve about the realities of imperialism. He was prepared to question the conduct of a dirty colonial war, but was in the end willing to assure its supporters of his backing.