Read Silence and the Word Online

Silence and the Word 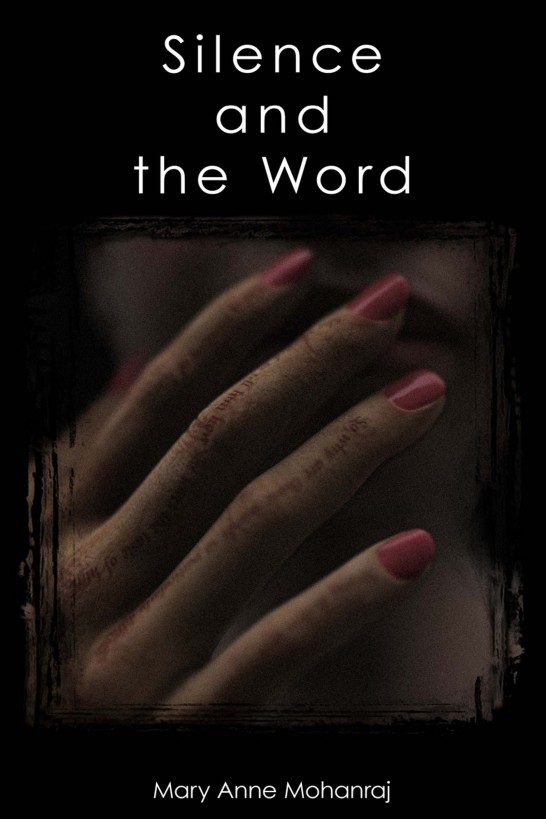 Silence and the Word

Published by Lethe Press at Smashwords

All rights reserved. No part of this book may
be used or reproduced in any manner whatsoever without written
permission, except in the case of brief quotations embodied in
critical articles or reviews.

Grateful thanks to the usual suspects who
gave support, encouragement, and critique at various stages, and
who did their best to keep me honest: Matt Austern, Kate Bachus,
Jed Hartman, Nalo Hopkinson, David Horwich, Dan Percival, Benjamin
Rosenbaum, and I’m sure several others whom I will be embarrassed
to have forgotten. Hopefully, they love me enough to forgive me the
lapse. Particular thanks to Shmuel Ross for extensive (and
repeated) proofreading! Any remaining errors are, of course, my
own. And extra-special thanks with gold stars to Karen Meisner, who
helped me decide what to leave out.

And Can This Ever
End?

Silence and the
Word

At the Gates of the
City

Listening to My
Daughter

Under the Skin: A
Survey

The Light at Dawn

And the sea is
shaking

catch me if you can

the bones want to
fly

how should I protest?

Mint in Your Throat

Would You Live For
Me?

Poem for a University

A Jewel of a Woman

one of the ways

Sitting Under a Tree, in
the Rain

As a writer, you have this opportunity, the
chance to use a few words—words which cost you nothing—and with
those words, you can try to change people’s minds and hearts. It’s
a pleasure and a delight, and while I often have a lot of fun with
it (as you’ll see in such pieces as “A Jewel of a Woman” and “The
Survey”), I also feel a tremendous responsibility. A sense of
noblesse oblige
—since I was lucky enough to be granted this
opportunity, I had better make the most of it.

That’s what pushes me to take on difficult
material—and please be aware, some of the pieces in this book
are
difficult. Stories like “Amanda Means Love,” which deals
with child sexuality, and “Mint in Your Throat,” which explores
sexual assault and its aftermath, have been more than a little
controversial, have come close to starting fist fights (as you’ll
see in the story end notes). Most of the stories in this collection
aren’t that edgy, of course—many, like “Johnny’s Story” and “Seven
Cups of Water” are fairly straightforward erotica. But while social
response to erotic fiction has markedly mellowed in the ten years
that I’ve been writing and publishing the stuff, I still frequently
collect shocked looks when I admit to writing about sex, slight
drawings back, as if to avoid guilt by association, contamination.
It’s not
nice
, writing about sex. My mother would much
rather I wrote children’s stories instead.

I do love children’s stories, and I’d be
happy to write more of them. (I did sneak one into this
collection—“The Poet’s Journey.”) I’ve written a fair bit of poetry
too, mostly romantic rather than sexual, and there’s lots of it in
here. I’ve dabbled in speculative fiction (see “At the Gates of the
City” and “Would You Live For Me?”), and certainly my recent
dissertation novel-in-stories,
Bodies in Motion
, is far
closer to literary fiction than erotic fiction. There was a strange
time, a few years ago, when I was living in Salt Lake City (and
perhaps influenced by the overwhelming conservatism). I wondered
why I was still writing about sex, why I spent so much time and
energy on it. Was it purely for the shock value, the admittedly
sometimes fun role of the black sheep?

My sex writing may have started that way, a
little, but I believe that there’s more to it—that the real reasons
I keep writing about sex are intimately tied to the power of the
material. Sex writing, perhaps because of its taboo nature, has the
power to reveal aspects of human nature that are otherwise
inaccessible. Writing about sex can be scary—when I’m writing
revelatory memoir pieces like “Silence and the Word” and “Under the
Skin,” it can be downright terrifying. But that only underlines its
importance, and its interest.

After ten years, I still find that writing
about sex is the most interesting writing I’ve done—not sex as
simple titillation, or for shock value, but sex as it relates to
and reveals the intricacies of the human heart. In passion, we are
stripped bare, we reveal our fragile and vulnerable selves. We can
only hope that the world will value us for what we are, will see us
clearly and with generous eyes.

Sometimes, when my mother asks me with that
wistful tone in her voice, if I’m
sure
I don’t want to be a
doctor, or at least a programmer, instead of an often-broke writer,
I’m dumbstruck, not knowing how to answer such an impossible
question. I try to explain to her that I have the best job in the
world, not the easiest, but at least for me, the most rewarding.
All I can do is be grateful to you, my readers, for giving me this
job, this opportunity. Especially to those who have been reading me
online since the early days of the net, who have stayed with me all
this time, thank you. And to all those who have found me since—I
hope you like what you find in the following pages.

I hope the stories, poems, essays in this
book interest you, that they surprise you, move you. I hope they
make you think, draw you into arguments, that some of them trouble
you. I hope at least a few bring you pleasure, arousal, delight.
Writing the best I can is the only way I can thank you properly for
the last ten years, so I hope I’ve done a good job. Enjoy.

My toes curl and release. I am lying with my
back against his chest, with my ass against his groin and him
slowly going limp inside me. I am catching my breath, slowing down,
listening to my heartbeat fill the room. I am waiting for the right
moment to shift away; though it would be nice to cuddle, I’m dying
of the heat. Yes, long enough, and in one movement I slip a little
forward and he slides out and only our toes are touching now, way
down at the bottom of my bed. And I look down the curve of my body,
smiling, down the faint moonlit bed, down my thighs to knees and
calves, looking for my toes—they are not there. Ankle, heel, and
emptiness.

I can’t feel them, either.

My heart thumps loudly. I blink, and my toes
are there, returned, and I am tempted to put it down to a trick of
the light, but… . Well. Nothing to be done about it right now.

“You okay?” He seems concerned.

We’ve cooled a little, and shift, so my head
rests on his shoulder.

He chuckles. “Thank you!”

I am tempted to ask him, if, during the act,
he happened to notice any odd flickering, but decide against it. A
little too intimate a question—I’ll save it for Mark or Peter.

I smile. They always ask. “Not so often. But
occasionally, when the mood strikes… .”

“Has his own diversions. And friends.” I
don’t mention Peter. Mark is usually enough to explain, the first
time round.

“Hmm…he says he doesn’t. I do, sometimes. But
I’m not sure that really matters. It hasn’t been enough to stop
me.”

The moonlight slides across the floor. We
talk, about little nothings. The bed is left entirely in darkness,
and now it is my desk that shines palely in the night, doubly
illuminated by moon’s light and flickering computer screen.
Swirling screensaver, cool blues mixing into greens. Finally, he
gets up, peels off the condom, cleans up, gets dressed. He sets my
alarm for me: six a.m. Deadline tomorrow—mustn’t oversleep. Then he
sits by me until I start falling asleep, kisses my forehead softly,
slips out. Sweet boy.

I keep my eyes resolutely closed, until I
fall completely asleep.

I won’t be visiting Mark for a few weeks. My
flight’s booked for the twenty-second. In the meantime, the work
for the new magazine has assumed nightmare proportions. Every hour
seems to bring fresh complications. If I had known how much time
this would take, would I have started it? A little late to worry
about it now—the first issue’s due in three weeks. Sometimes, as
I’m typing, my fingers seem to flicker away—but the words keep
appearing on the screen, and since I touch-type, I’m not really
looking at my fingers anyway. Maybe I need new glasses?

Her boyfriend’s causing trouble again. I make
appropriate noises—that’s all she needs. This is a recurring theme,
and it no longer needs all of my attention. I know my lines. “No, I
wouldn’t take that either. You should talk to him.” She starts
crying—time for reassurance. “Aw, c’mon. It’ll be okay… .”

While I murmur, I type. She’ll never know. A
brief pang of guilt, stifled.

“Dear Mr. Rossiter-Parks, thank you for your
kind submission to our new magazine. I’m sorry to have to inform
you that… .” I really need to take the time to set up a template
and automate part of this. More efficient in the end. Tomorrow.
I’ll do it tomorrow. In the meantime, I can do this kind of letter
in my sleep. Heh. Now
that
would be efficient. “Please do
feel free to submit to us in the future… .”

Her sobs quiet a little. My cue. “You know he
loves you.” Her sobs get louder, making it hard to concentrate.
“Look, it
can’t
be that bad!” Whoops. Not too exasperated.
She’ll just get more upset. Soothing. That’s the way to go. “I
think you’re great, kiddo, and I’m sure he does too… .”

I’ve been sitting quite a while in one place,
and my neck has started to hurt. I reach up to switch the phone
from one ear to another…and my hand isn’t there. My forearm ends at
the wrist. I freeze, and Katherine weeps on, while I stare at the
computer through the space that should have been filled by my
hand.

I bite my lip, hard. I draw blood.

Then my hand is back. Just as if it had been
there all along, almost as if it had planned this—just a little
excursion. A rest, perhaps? Have all of my body parts been doing
this all along, behind my back? Ducking out when I wasn’t looking?
Maybe I haven’t been paying enough attention to my body lately.
Maybe it wants some exercise? I
have
been skimping on my
sit-ups, after all. Just haven’t felt like I had the time for the
full workout in the mornings.

I haven’t heard anything Katherine has said
for minutes.

I hang up the phone. She was still crying. My
lip is still bleeding. I have not taken my eyes off my hand, but it
seems pacified. It stays right where it’s supposed to be. My heart
is thumping—a few toes were one thing, but I need my hand. I can’t
type without it, and if I can’t type, then the magazine will go
under, and it’s not just my project, people are counting on me,
it’s my responsibility—not to mention that I won’t be able to make
my damn rent…was that a flicker?!

I pledge that I will do my exercises every
morning, okay? I wonder if saying this in my head is enough, but it
would sound so silly to say it out loud.