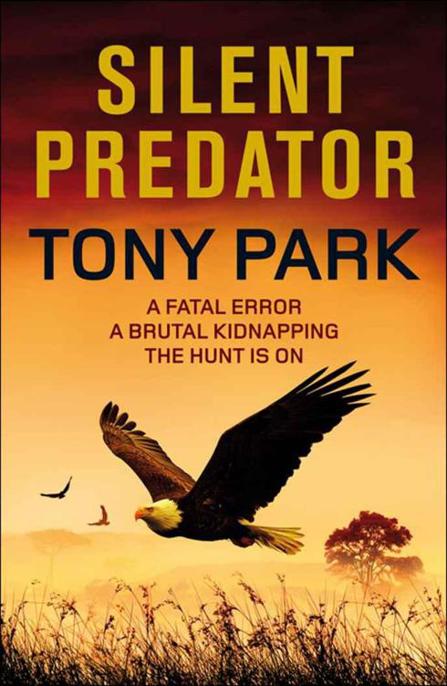 ‘The story is twisty and exciting, the writing is pacy and there are plenty of gun fights …
Silent Predator
is a page-turner and a great way to spend a winter evening, transported to somewhere warm and exotic’

‘The fluid writing and fascinating descriptions of the Botswana countryside, and its people, will keep most readers happily turning the pages … In all, a well-written and highly recommended debut mystery’

‘Good writing, some memorably exciting scenes and some real feeling for its African setting. Park sorts out his heroes and villains with admirable pacing and inventiveness. There’s also a lively plot, which is detailed and clever without ever becoming convoluted’

Tony Park
was born in 1964 and grew up in the western suburbs of Sydney. He has worked as a newspaper reporter in Australia and England, a government press secretary, a public relations consultant, and a freelance writer. He is also a major in the Australian Army Reserve and served six months in Afghanistan in 2002 as the public affairs officer for the Australian ground forces. He and his wife, Nicola, divide their time between their home in Sydney and southern Africa, where they own a tent and a Series III Land Rover. Please visit his website www.tonypark.net

The moral right of Tony Park to be identified as the author of this work has been asserted in accordance with the Copyright, Designs and Patents Act, 1988.

Each beat of his heart sent a dart of pain to his head as his brain tried to break through the bone of his skull. His tongue was so swollen and dry his first thought was that he might choke. He was aware of a bright light shining on the other side of closed eyelids. He opened his eyes and blinked, the small movement eliciting another moan.

There was an almost mechanical noise beside him, like a motor with a faulty exhaust. Snoring. He turned his head – more suffering – and saw the woman lying on her back, mouth agape, her bare breasts rising and falling. The tangle of sheets was across her lower legs. Like him, she was naked.

He groped on the side table for his watch and mobile phone. It was six am and the bright African
sunlight was streaming in through the sliding glass doors. ‘Shit!’ he said aloud again. Ignoring the ache behind his eyes he swung out of the king-size bed, grappled his way through the ceiling-to-floor mosquito net and hopped on one leg while he pulled on his shorts. He grabbed the mobile phone and checked it. Not only had the alarm not gone off, it wasn’t even set.

Tom buckled his belt and slipped his nine-millimetre Glock 17 into the circular pancake holster above his right hip. He strapped on his watch and checked the time again. Two minutes past six. ‘Shit.’

The weight of his pistol was balanced on his left side by an Asp extendable baton, a spare magazine of ammunition and a Surefire torch, all in black leather pouches. He stuffed his remaining two spare magazines in his shorts pocket, along with his Gerber folding knife. Despite the rush he would have felt naked leaving the room without any of his personal kit.

He pulled on a blue polo shirt and left it untucked so that it covered the equipment, then forced his feet into trainers with no socks. Thank god, casual dress was the order of the day.

With nothing more than an angry shake of his head at the sleeping woman, he barged out the door and along the raised walkway of darkly stained wooden logs that wound through the thick thorny bushes behind and between each of the separate luxury suites of the safari lodge. He paused to knock on the door of the unit next to his. ‘Bernard?’ he called. No answer. Of course there bloody well wouldn’t be an answer.
The advisor was ex-Royal Navy. He wouldn’t be late for duty. Tom jogged on.

The morning air was still cool, but the sun was already hot on his face as he glanced out across the Sabie River, its smattering of granite boulders glowing pink in the dawn’s rays. A hippo grunted, mocking him with its deep belly laugh as his shoes pounded the deck.

He slowed to a walk, to catch his breath and maintain some show of dignity as he entered the sumptuous reception area, where early morning tea and coffee and rusks and fruit were laid on a long table beneath the thatched cathedral-style roof.

The South African minister was talking to an aide, an empty coffee cup in his hand. He looked at Tom and then beyond him, down the walkway.

Tom motioned her aside with a hand on her elbow. She shrugged off his touch. ‘Where’s Greeves?’ he whispered.

‘That’s what we want to know. Not only are you late, but he hasn’t shown up – neither has his policy advisor.’

He saw the naked disapproval on her face, of him as well as of his tardiness. She must have guessed what had gone on the night before. It was no time to think about what she thought of him. ‘He must be on the phone to the UK. I’ll go and check on him.’

‘I already did that,’ she said. ‘There was no answer.’

‘Why didn’t you come and find me?’ he asked.

‘
Ag
, I’ve got my own man to look after. I can’t be running around after you, Tom.’ Her Afrikaans accent, which he’d found appealingly exotic at first, grated on his ears. He strode back down the walkway to the suite of the UK Minister for Defence Procurement. Tom prayed that he was right, that The Honourable Robert Greeves was on the phone to his immediate superior, the Secretary of State for Defence, or a senior bureaucrat on some urgent matter of State, and that was why he hadn’t answered the door and was late.

He felt physically sick, but didn’t know why. He’d had only one beer the night before. He came to the third suite, took a deep breath to quell the dizziness and steady himself, and knocked. No answer.

He waited for exactly a minute and knocked again. Nothing. He pulled out his mobile phone and dialled the minister’s private number. It was for emergencies only, but Tom could feel his pulse rate rising. Straight through to voicemail. He tried the policy advisor’s mobile. It rang out and he heard Bernard Joyce’s cultured voice on the message.

Tom went on to Bernard’s suite, even though he had already tried it once, and knocked on the door. ‘Bernard?’ Nothing again. He thumped harder. ‘Bernard!’

He jogged down the decking to his own unit, opened the door, strode in and called Greeves’s suite. While he waited he saw, through the haze of mosquito netting, the woman still sprawled there. If she was awake she was hiding it. He cursed himself – his weakness. The landline rang out. No answer. ‘Shit,’ he said. ‘Stay cool.’ There was no answer in Bernard’s
suite. They weren’t talking on their room phones.

Tom headed back to reception. He ignored the South African policewoman’s enquiring look and went to the duty manager, a young white guy called Piet. ‘I need the key to Greeves’s suite.’

Tom forced a smile for the South African Defence Minister, Patrick Dule, who was having a hard time hiding his impatience. Greeves wasn’t the kind to go off with Bernard for an impromptu morning stroll. Tom had learned in a very short time that when a schedule was made he stuck to it, and woe betide anyone who was a minute late.

Tom jogged back to Greeves’s suite. Instinctively, he raised his polo shirt, so that the butt of his Glock was exposed, and easier to draw. ‘Mr Greeves, sir?’ he called again.

He heard footsteps and spun around. It was her. Sannie held up a skeleton key of her own. Great minds, he thought to himself, without mirth. ‘Go to number four – Bernard Joyce’s suite. There was no answer there, either. Let yourself in.’

She nodded. No time for smart-mouthing any more.

He let himself into the minister’s luxurious room. It was identical to his in its safari chic décor and opulence. He took in the signs immediately. The fallen lamp stand, the sheets in disarray, the tangle of mosquito netting on the floor, the bloody palm print on the open sliding door. He drew his pistol. A laptop
computer was open, but face down. Greeves’s wallet and mobile phone, switched off, on the bedside table.

Tom moved quickly through the rest of the suite, checking the bathroom and toilet. No signs of the man, other than his toiletries and some clothes in the bathroom. He went back outside and saw Sannie running along the boardwalk.

‘Joyce,’ she panted. ‘He’s gone. Signs of a struggle. It doesn’t look like it was an animal attack.’

Tom shook his head. ‘Greeves is gone too. Wallet full of cash and mobile phone are by the bed, so it wasn’t money they were after.’

‘Oh, dear god,’ she said, and it was more prayer than blaspheming.

And Tom Furey needed all the prayers he could get, because he’d just woken to a protection officer’s worst nightmare.

Tom smiled, even though it was too dark in the back of the transit van to see the young constable’s face. He sighed and whispered, ‘You should have gone before we left.’ He’d been waiting for this – as the boy had been fidgeting for the past hour.

‘Watch it, Harry,’ Tom said. He kept his eye on the house, number fourteen, staring at it through the peephole in the side panel of the van. The light was still on in the front room of the nondescript pebble-dashed semi in the quiet Enfield street. He wondered if the neighbours had any idea what was going on behind that green door. They’d be mostly commuters, he reckoned, with safe jobs. Mid-level office workers, secretaries, tradesmen – and they would have a fit if they knew they were living in the same street as a bunch of people smugglers. Someone must have
noticed something, though, or they wouldn’t be here. Londoners had been jolted out of their apathy after seven-seven, the suicide bombings on the tube and the buses, and curtain twitching sometimes paid off.

‘It’s only the truth, Tom. You
are
old enough to be my bleedin’ father.’

‘Perhaps I am. I was in uniform in Islington in the eighties. Your mum ever go to a Bryan Ferry concert?’

At the far end of the cramped space, Steve, the civilian information technology expert, looked over the top of his magazine. Unlike Harry, Steve, whom Harry had quietly dubbed ‘the Anorak’ by virtue of his job rather than his expensive overcoat, could keep quiet in an op.