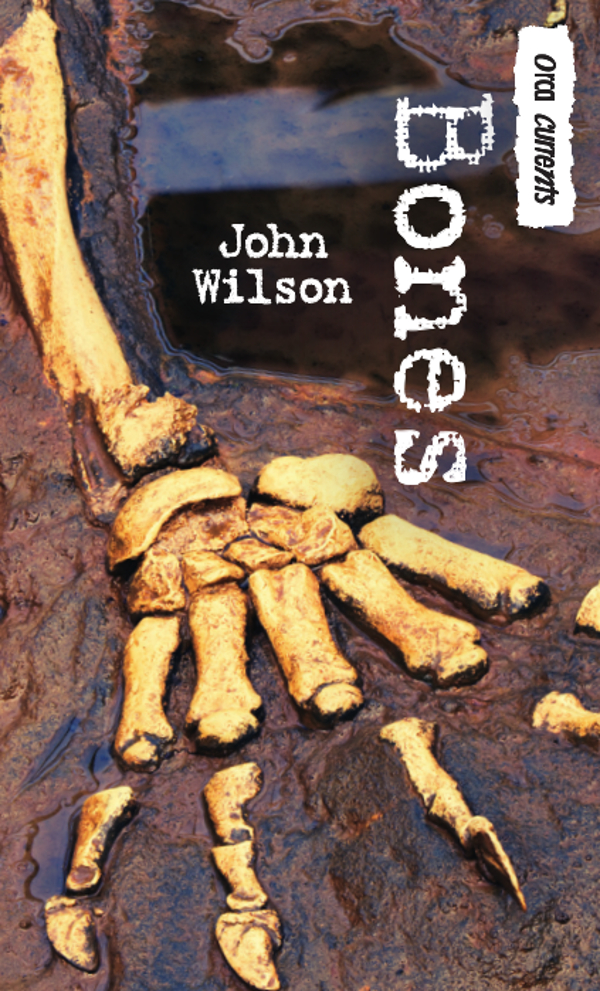 Summary:
Sam and Annabel learn about paleontology while solving a mystery.

My mom meets us at the airport, wearing a poncho, a long paisley skirt and cowboy boots. Her hair is in two braids that swing wildly as she envelopes us in an enthusiastic hug. “Hi, Mom,” I say as soon as I get a chance. “This is Annabel.”

“Wonderful to meet you,” Mom says to Annabel, then looks back at me. “But you mustn't call me Mom. That defines me by the role of motherâa role I love, but I'm more than that. You must call me Acacia. It's a healing herb. Very good for skin ailments,” she says with a pointed look at the huge zit that has exploded on my chin. “It also cures allergies, insect bites and athletes' foot. And the beans are delightful with guacamole.”

I stand rooted to the spot, half overwhelmed and half horribly embarrassed. Annabel isn't fazed. “Yeah,” she says, “it's an astringent, like tannin. Did you know there are almost a thousand different
Acacia
species in Australia alone?”

“Really?” Mom says, linking arms with Annabel. “I must go there one day. Aboriginal Australians have a wonderful history of using medicinal herbs. They have many more routes to healing than we do.” Any worries I had about Annabel getting on with my weird mother vanish.

Mom and Dad split up several months ago. Dad and I moved to Australia, where I met Annabel, and Mom moved to a communal farm outside Drumheller, Alberta. A couple inherited it and decided to dedicate it to alternative lifestyles. About fifteen people live there in a house and a couple of trailers, growing their own food, raising goats and chickens and making their own clothes.

The idea for a trip to visit Mom during the July school break came from Dad. The money came from Annabel's Uncle Bill. He paid for our flights to say thanks for the part we played in getting the
Loch Ard
peacock back to his museum.

I was missing Mom, so I was fine with the idea. I was nervous that Annabel might not want to come, but the news that there was a dinosaur skeleton on Mom's farm clinched Annabel's decision to join me. The skeleton had been discovered by a local farmer in a small valleyâcoulee, it's called in Albertaâand was being excavated by scientists from the Royal Tyrrell Museum. There was no way Annabel was going to miss out on seeing a dinosaur dig firsthand.

I follow Annabel and my mom as they traipse through the airport deep in conversation about botany and folk medicine, leaving me to drag along behind with the luggage. I'm happy that they're getting along. It's going to be a great holiday.

“So these are badlands,” Annabel muses out loud. We lean on our bikes, looking out over narrow steep-sided, cactus-filled valleys that go nowhere. We are at Horsethief Canyon on the Red Deer River. Dusty misshapen hills and weird spires of rock called hoodoos create a sci-fi landscape. Even on the edge of the badlands, it's hot. I have trouble imagining what it must feel like down in those narrow valleys, sheltered from even the merest breath of wind. “
Hunger Games
country,” she adds.

“I wonder if there's such a thing as
goodlands
?” Annabel continues. “If there is, it would be the opposite of this. There would be gently rolling hills covered in grass and fields of wheat. Maybe a few cows or sheep grazing happily in the distance between broad, shady trees.”

“
Anne of Green Gables
country,” I suggest, and Annabel laughs.

“I guess we should head down to the museum if we're going to meet that scientist,” I say. Mom has arranged for us to meet Dr. Owen, the man who's working on the dinosaur on her farm. He has agreed to show us around the museum.

We push our bikes out of the parking lot and set off along the narrow paved road toward Drumheller. The wind whistles past as we wheel over the edge of the prairie and down into the wide, flat valley bottom. We slow as the road levels out, and we pass small farms and stands of willows. I can't imagine being happier than this, cycling along on a beautiful summer day beside Annabel. I'm trying to imagine this moment lasting forever when Annabel powers off, yells “Race you,” over her shoulder and leaves me in her dust.

I'm panting and sweating when we eventually pull in among the cars, campers and tour buses in the parking lot of the Royal Tyrrell Museum. We chain our bikes and join the tourists going through the main doors. We explain that we have an appointment with Dr. Owen and are directed through the exhibition hall to where he will meet us, beside the huge
T. rex
skeleton that is one of the museum's treasures. As we wait, I stare up at the skeletal jaws lined with curved, razor-sharp teeth, some of which are as long as my hand. “He seems to be smiling,” I comment.

“What makes you think it's a male?” Annabel asks.

“That doesn't mean anything,” Annabel says. “There are many species where the female is considerably larger than the male. The male triplewart seadevil is a tiny stunted creature that can only live as a parasite attached to the much larger female.”

I feel like a tiny stunted creature when Annabel comes out with stuff like this. She's not only smarter than I am, she's smarter than everyone I know put together. “What's a triplewart seadevil when it's at home?”

“It's an anglerfish. They can live in depths of six thousand feet in the ocean.”

“And how many decimal places can it recite Pi to?” I ask, teasing Annabel about her obsession with learning the endless number.

“Oh, female triplewart seadevils are known to recite Pi to over one million three hundred thousand decimal places. Though the males can only manage five or six.”

She says this so seriously that it takes me a minute to realize I'm the one being teased. “Okay, you win, but I doubt the male
T. rex
was a helpless parasite.”

“Probably not,” Annabel agrees, “and this one, male or female, is impressive.”

“Actually, the female
T. rex
may well have been larger than the male.” We turn to see a short, bearded man wearing a shirt and pants that seem to be mostly bulging pockets. “You must be Sam and Annabel,” he says, stepping forward and holding out his hand. We shake. “I'm Dr. Robert Rawdon Mallory Filbert Owen, the museum's director of dinosaur research, collection and exhibition,” he says with a grin. “Quite the handle, eh? I always give my full name. It seems such a shame to waste it, but everyone calls me Dr. Bob. I'm so glad your mom could set up this visit.”

His welcome is interrupted by the opening chords of Deep Purple's “Smoke on the Water.” Dr. Bob looks sheepish and digs into one of his many pockets. “First thing I ever learned to play on the guitar,” he says, dragging out a cell phone and stepping away. “Excuse me.”

“Sorry about that,” Dr. Bob says, stuffing his phone away in a pocket. “Technology is convenient, but it does make it hard to escape. Have you had a chance to visit the excavation site yet?”

“Not yet,” I say. “We were going to go down yesterday, but the rain made it too slippery.”

“Rain is unusual here in summer, and it does make moving around in the coulees difficult. We didn't have anyone on site yesterday anyway. The team is back working at the dig today. In fact, I was planning to go down to see how things are going after I've finished here with you. You're welcome to tag along.”

“Sure, thanks,” I say. I glance at Annabel, who nods. “What exactly is the skeleton that you found there?” she asks.

“Exactly?” Dr. Bob says. “That's a tough one to answer. At first we thought it was a large ornithomimid dinosaur, because the hands were grasping and very lightly built. We even hoped for some feather impressions, but that doesn't seem to be the case. It's more complex than we thought. It might even be a completely new species, though we mustn't count our chickens before they're hatched, eh?”

Dr. Bob and Annabel laugh out loud. I nod, not really getting the joke.

“The dinosaurs were birds.”

“Not strictly speaking,” Dr. Bob says, “but very closely related. Anyway, would you like a tour of our setup here?”

“Yes,” Annabel and I say at the same time.

“Excellent. Follow me.” Dr. Bob leads us over to a door marked
Staff
Only
and ushers us through. I glance back and say a silent goodbye to the smiling
T. rex
.

The back rooms of the Tyrrell are a different world from the areas the public sees. There are no perfectly mounted skeletons posed in front of paintings of ancient landscapes, or computer terminals where you can build your own dinosaur. There are offices, rooms cluttered with camping equipment, drills and hammers, and a large warehouse filled with steel shelving crammed with wooden boxes and white, oddly shaped packages.

“This is an exciting time in dinosaur study,” Dr. Bob explains, waving his arms around with enthusiasm. “Amazing discoveries are made every day all around the worldâChina, Argentina, Africa and even here in Alberta. We're digging fossil bones out of the rock faster than we can study them. We need all this shelving to store everything until we can get around to examining it. Sometimes, that's years.”

“But they don't look like bones,” I say, hoping I don't sound too stupid. “They're mostly large white lumps.”

Throw Them All Out by Peter Schweizer
Deltora Quest #8: Return to Deltora by Emily Rodda
Disclosure: A Novel by Michael Crichton
Bits & Pieces by Jonathan Maberry
Nights Like This by Divya Sood
Bittersweet Trust by J. L. Beck
Feather in the Storm: A Childhood Lost in Chaos by Wu, Emily, Engelmann, Larry
Her Firefighter SEAL by Anne Marsh
Surviving Love (Surviving #2) by Mrs Ada Frost
The Wind Rose by B. Roman