Read Since the Surrender Online 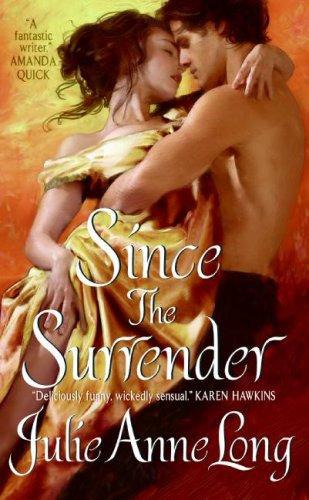 The Montmorency Museum reminded Chase of an abandoned mistress, perhaps…

Mrs. Rosalind March had known Captain Eversea was approaching even before…

The filthy urchin was waiting outside the museum. Chase flicked…

Rosalind lingered after Chase was gone, much as one waits…

And while Chase was drinking to remember and then forget…

Carriage after carriage had rolled up to the Callender town…

The walk was unpleasant, fast and silent.

Chase slept very badly. Pain lightninged through his leg at…

The Final Curtain was an ominous name for a pub,…

Rosalind wore a green dress, because it made her eyes…

When they emerged from the museum, Liam was standing on…

It was with a sense of unreality that Rosalind found…

They dodged the housekeeper and her viciously applied broom and

Chase told her everything he’d learned from the Charley; he…

She was nearly nodding off in a haze of fatigue…

After promising Mr. Myrtleberry he would do what he could to…

The wall thunked closed, and Rosalind heard a loud grunt…

Two corded velvet curtains had opened directly onto a small…

“What’s this?” Colin was holding the Rubinetto and staring at…

Other Books by Julie Anne Long

Chase Eversea—Captain Charles Eversea—took perverse, righteous pleasure in the word. Banished from Pennyroyal Green, Sussex, his home, and his family, all for muttering six little words into the foam of his ale at the Pig & Thistle just four nights ago. He certainly hadn’t meant anyone to hear them. He hadn’t even meant to say them aloud. But out they’d come, and in all honesty, he couldn’t think of a soul who would blame him given the circumstances.

It was his brother Colin’s fault.

But then, historically in the Eversea family, things usually were. Chase scowled with gargoyle ferocity up at the unprepossessing door of a boardinghouse on a London street that straddled a frayed edge between respectability and dissolution—which, granted, some would have said neatly described him these days. Inside, a distant Eversea cousin, a certain Mr. Adam Sylvaine was allegedly lodged, and Chase had been summarily, uncompromisingly dispatched—in other words, banished—to determine whether he would make a suitable new vicar for Pennyroyal Green. A task for which he of all people was surely unsuitable.

He suspected this interview was merely a ruse perpetrated by his family to rid Sussex of him.

As if inspired by the sheer thunder of his mood, the dense summer sky opened and unceremoniously dropped its load of rain. He stood as water drilled upon his hat and spilled in rivulets over his shoulders and eddied about his boots, turning him instantly into an incongruous glowering fountain around which pedestrians were forced to dodge. It amused him to be obstructive. One would have thought the sky was spitting hot fat, for God’s sake, the way this lot carried on, scurrying with arms flung up over their heads. A young man hunched against the rain inadvertently intercepted his scowl and froze, startled, like a pointer flushing game. He unfroze and bolted seconds later. His feet a blur. Surreptitiously crossing himself as he fled.

Chase snorted. Once upon a time he could quell uprisings or blacken the mood of a regiment with that scowl. He could do the converse with a smile: inspire dispirited soldiers to uncommon battlefield valor. Melt petticoats from women.

He rationed smiles these days as though the war was still on. But he smiled now at the retreating man. And though it wasn’t precisely a pleasant smile, a woman dashing by arm in arm with a man, her bonnet in danger of becoming a sodden ruin, slowed as if the curve of it had snared her like a net.

And thus she sacrificed what remained of her bonnet to gaze at Captain Charles Eversea, who pretended not to notice, and seconds later she was tugged into motion again by the man whose elbow linked hers.

The rain ended almost as quickly as it had begun, as summer rains do, leaving everything soaked and steaming. Chase sighed and leaned hard on his walking stick to propel himself forward again. He still needed the damned stick for the first step after motionless, and the fact of this was always a touch paper to the fuse of his temper, and his temper propelled him the rest of the way up any given hill or flight of stairs so quickly his limp was nearly imperceptible and the pain nearly forgotten.

It was as constant and varied and part of him as thought now. It ebbed and swelled, it tormented, it simply was.

A bit like his bloody family, he thought sourly. Chase took another step and found he could go no farther. Something had hold of his coat.

“Guv!” the thing spoke. In breathless cockney. From somewhere near his hip.

Chase glowered down. A pair of very blue eyes peered up at him from a filthy boy’s face.

He whipped his coat out behind him and shook the thing open in one hand, and then, without turning his head, his hand shot out and snatched the collar of the boy’s shirt just as the urchin tried to dart away. The collar nearly came off in his fingers, so he clamped his hand on a bony shoulder and spun the lad around.

The boy blinked. “How did—”

“I’ll have that back,” he repeated with even-toned menace. A distracted person might not have felt the nimble fingers nick the button from his coat, which was what the urchin doubtless had been counting on. Chase was seldom truly distracted, regardless of the concerted effort he put into distracting himself.

“Just a button,” the boy tried.

It was an absurd negotiation. He should just cuff the little street rat, as this one had obviously been all but bred for the hulks or gallows. The boy had yet to grow into his ears; they projected horizontally from his very round head. Thanks to dirt, his hair was an indeterminate color, probably blond, and his expression was surly, but his robin’s-egg-blue eyes were frightened and not unintelligent. Rain had made narrow roads in the grime on his cheeks, striping him like a small animal in native camouflage. Perhaps offering a foreshadowing of what he might look like behind bars. Bloody London. He’d scarcely arrived and he was being robbed. Chase blackly, fixedly, stared a threat until the dirty fist extended and uncurled again.

The urchin stared in nervous wonder at his own hand. As though it had betrayed him. The button winked in the grimy palm. Good brass one, that. Worth four shillings at the least.

“I would have paid you,” he told the messenger-thief ominously.

“Took yer time abou’ it, din’t ye.” It was a far less confident squeak this time. He tried to dodge away.

Chase, undecided as to whether he wanted to turn this one over to the Charleys, kept his hand clamped on the boy’s shoulder as he shook open the seamed message to see if it was indeed a message or just a means of robbing him. It was an odd sensation—having a captive. Let alone a small filthy boy captive. Chase hadn’t done anything quite so decisive as prevent someone from doing something in a very long time.

Captain Eversea—Meet me at the Montmorency

Museum in one hour near the Italian pastorals. It’s a matter of utmost urgency.

He stared at the word in rank disbelief. It all but throbbed before his eyes.

Cows were the reason he was here in the first place. If only bloody Colin could have stopped talking about cows that night at the Pig & Thistle—

He frowned and thought about the Montmorency. Chase had never seen a reason to go beyond Covent Garden into Bloomsbury, so he’d never visited it. If he recalled correctly, it had come about when a wealthy, eccentric (was there any other kind?) naturalist had cocked up his toes and left his vast collection of things—sarcophagi, embalmed insects, scrolls, furniture—to a surprised and not entirely grateful British government, which had done a decent job of sorting it all out and then had stuffed it into a centuries-old residence purchased from an aristocrat—that would be Montmorency—who had long ago abandoned it for a more fashionable address.

Hardly the ideal setting for an assignation, if that’s what this was meant to be.

The script was indeed very feminine, but it wasn’t one he recognized. Generous loops bloomed atop long lean letters joined with profligate flourishes, all tilting impatiently forward. It was made by a heavily inked pen. The margin of the paper was jagged. It appeared to have been ripped in haste from a book. The better to imply “utmost urgency,” he supposed.

Chase slowly levered his head up and fixed him with a black stare. The cheeky expression gave way to a far-more-appropriate-to-hiscircumstance unease.

“Who gave this message to you?” He barked the question.

“A liedy.” The urchin was startled into answering instantly. What in God’s name was a lie—Oh.

A mind on a singular track, this one. A shilling was a princely sum for a street rat. And this woman had promised the urchin his money?

Confident woman. Or a foolhardy one.

Or this was all some sort of elaborate ruse.

“Who is she, and how did you know to give this to me?”

Urchin tried to shrug, but his shoulder was under the governance of Chase’s hand. He managed only a twitch.

Chase had taken a hack part of the way from the family town house and walked the rest, because he didn’t like his leg to think he ever intended to coddle it, given that he’d spent the better part of five years in Sussex healing (and drinking, and counting on Colin to distract him). A boy on foot could move more nimbly than a hack through some crowded streets.

Urchin was dogged, he had to admit. He’d earned his shilling.

“But how did you know I was the person she sought? Did she give you a description of me?” And what would that description have been? Tall, self-important, scowls and limps?

“Nay. Jus’ the ’ouse number. Took a chance, din’t I, that ye were the gentleman ’twas meant for?” Urchin was pleased with itself. “And I were right. Often am,” he added complacently.

Chase was struck by the fact that this sounded just like something he would have said.

Chase scowled his disapproval of this entirely inadequate description, which made the urchin flinch again. “And?” he snapped.

“And she had a—” Urchin stopped.

“A p-pretty hat.” Urchin looked embarrassed and faintly awed at his inability not to obey Chase’s command. “Feather up top.” He waved his hand over his head.

A posh, well-dressed, not fat young woman had apparently impulsively sent this street rat in search of him?

He thought back over the “liedies” he’d consorted with in the five years since he returned from the war. In truth, few of them could accurately be described as “ladies.” He had great difficulty imagining any of the actual ladies of his acquaintance sending a cryptic, anonymous message by way of a boy who smelled like the bottom of a boot.