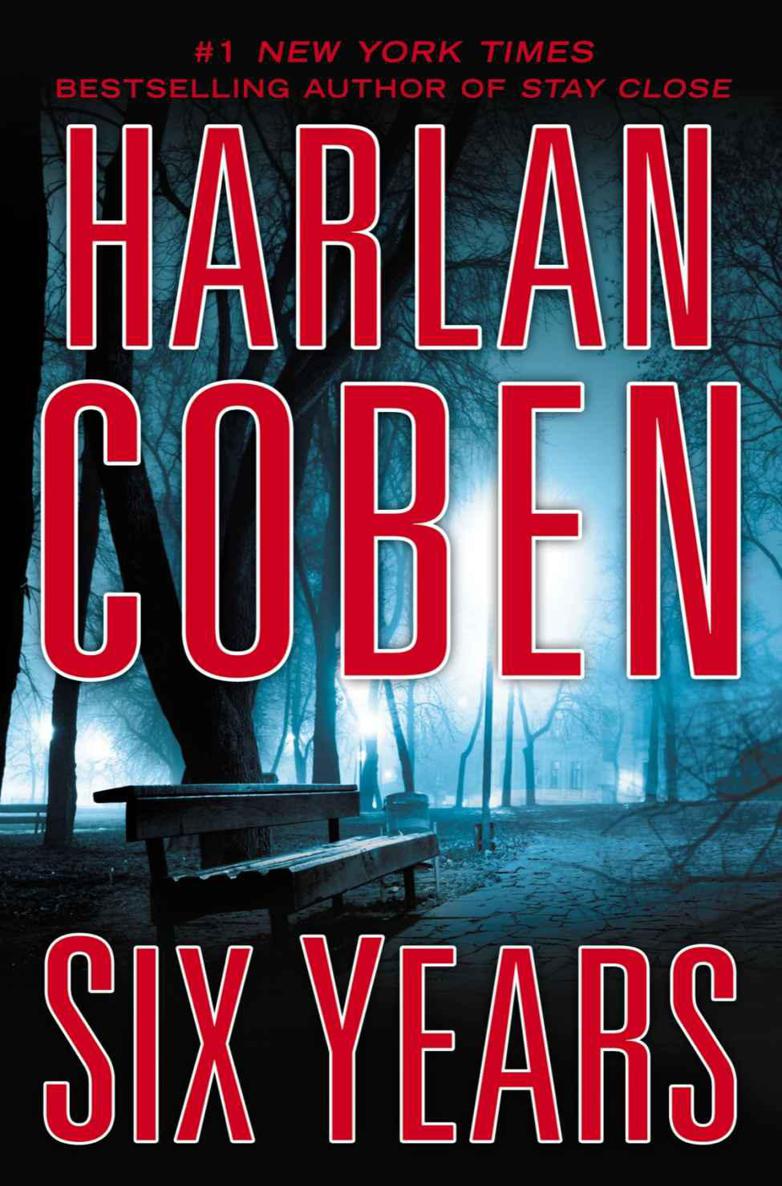 has been applied for.

Without you, dear friend, there’d be no Win

I
sat in the back pew
and watched the only woman I would ever love marry another man.

Natalie wore white, of course, looking extra mock-me-forever gorgeous. There had always been both a fragility and quiet strength to her beauty, and up there, Natalie looked ethereal, almost otherworldly.

She bit down on her lower lip. I flashed back to those lazy mornings when we would make love and then she’d throw on my blue dress shirt and we’d head downstairs. We would sit in the breakfast nook and read the paper and eventually she’d take out her pad and start sketching. As she drew me, she would bite down on her lip just like this.

Two hands reached into my chest, grabbed my brittle heart on either side, and snapped it in two.

Why had I come?

Do you believe in love at first sight? Neither do I. I do, however, believe in major, more-than-just-physical attraction at first sight. I believe that every once in a while—once, maybe twice in a lifetime—you are drawn to someone so deeply, so primordially, so immediately—a stronger-than-magnetic pull. That was how it was with Natalie. Sometimes that is all there is. Sometimes it grows and gathers heat and turns into a glorious inferno that you know is real and meant to last forever.

And sometimes you just get fooled into thinking the first is the second.

I had naively thought that we were forever. I, who had never really believed in commitment and had done all I could to escape its shackles, knew right away—well, within a week anyway—that this was the woman I was going to wake up next to every single day. This was the woman I’d lay my life down to protect. This was the woman—yes, I know how corny this sounds—whom I could do nothing without, who would make even the mundane something poignant.

Gag me with a spoon, right?

A minister with a cleanly shaven head was talking, but the rush of blood in my ears made it impossible to make out his words. I stared at Natalie. I wanted her to be happy. That wasn’t just lip service, the lie we often tell ourselves because, in truth, if our lover doesn’t want us, then we want her miserable, don’t we? But here I really meant it. If I truly believed that Natalie would be happier without me, then I would let her go, no matter how crushing. But I didn’t believe that she would be happier, despite what she had said or done. Or maybe that is yet another self-rationalization, another lie, we tell ourselves.

Natalie did not so much as glance at me, but I could see something tighten around her mouth. She knew that I was in the room. She kept her eyes on her husband-to-be. His name, I had recently found out, was Todd. I hate the name Todd. Todd. They probably called him Toddy or the Todd-Man or the Toddster.

Todd’s hair was too long, and he sported that four-day-stubble beard some people found hip and others, like me, found punch-worthy. His eyes smoothly and smugly skimmed the guests before getting snagged on, well, me. They stayed there a second, sizing me up before deciding that I wasn’t worth the time.

Why had Natalie gone back to him?

The maid of honor was Natalie’s sister, Julie. She stood on the dais with a bouquet in both hands and a lifeless, robotic smile on her lips. We’d never met, but I’d seen pictures and heard them talk on the phone. Julie, too, looked stunned by this development. I tried to meet her eye, but she was working that thousand-yard stare.

I looked back at Natalie’s face, and it was as if small explosives detonated in my chest. Just boom, boom, boom. Man, this had been a bad idea. When the best man brought out the rings, my lungs started shutting down. It was hard to breathe.

I had come here to see it for myself, I guess. I had learned the hard way that I needed that. My father died of a massive coronary five months ago. He had never had a heart problem before and was by all accounts in good shape. I remembered sitting in that waiting room, being called into the doctor’s office, being told the devastating news—and then being asked, both there and at the funeral home, if I wanted to see his body. I passed. I figured that I didn’t want to remember him lying on a gurney or in a casket. I would remember him as he was.

But as time went on, I started having trouble accepting his death. He had been so vibrant, so alive. Two days before his death, we had gone to a New York Rangers hockey game—Dad had season tickets—and the game had gone into overtime and we screamed and cheered and, well, how could he be dead? Part of me started wondering if somehow there had been a mistake made or if it was all a great big con and that my dad was maybe somehow still alive. I know that makes no sense, but desperation can toy with you and if you give desperation any wiggle room, it will find alternative answers.

Part of me was haunted by the fact that I never saw my father’s body. I didn’t want to make the same mistake here. But, to keep within this lame metaphor, I had now seen the dead body. There was no reason to check the pulse or poke at it or hang around it longer than necessary.

I tried to make my departure as inconspicuous as I could. This is no easy feat when you’re six-five and are built, to use Natalie’s phrase, “like a lumberjack.” I have big hands. Natalie had loved them. She would hold them in her own and trace the lines on my palm. She said they were real hands, a man’s hands. She had drawn them too because, she said, they told my story—my blue-collar upbringing, my working my way through Lanford College as a bouncer at a local nightclub, and also, somehow, the fact that I was now the youngest professor in their political science department.

I stumbled out of the small white chapel and into the warm summer air. Summer. Was that all this had been in the end? A summer fling? Instead of two randy kids seeking activity at camp, we were two adults seeking solitude on retreat—she to do her art, me to write my poly-sci dissertation—who met and fell hard and now that it was nearing September, well, all good things come to an end. Our whole relationship did have that unreal quality to it, both of us away from our regular lives and all the mundanity that goes along with that. Maybe that was what made it so awesome. Maybe the fact that we only spent time in this reality-free bubble made our relationship better and more intense. Maybe I was full of crap.

From behind the church door I heard cheers, applause. That snapped me out of my stupor. The service was over. Todd and Natalie were now Mr. and Mrs. Stubble Face. They’d be coming down the aisle soon. I wondered whether they’d get rice thrown at them. Todd probably wouldn’t like that. It’d mess up his hair and get stuck in the stubble.

I headed behind the white chapel, getting out of sight just as the chapel doors flew open. I stared out at the clearing. Nothing there, just, well, clearing. There were trees in the distance. The cabins were on the other side of the hill. The chapel was part of the artist retreat where Natalie was staying. Mine was down the road at a retreat for writers. Both retreats were old Vermont farms that still grew a bit of the organic.

I turned toward the familiar voice. There, standing no more than ten yards away from me, was Natalie. I quickly looked toward her left ring finger. As if reading my thoughts, she raised the hand to show me the new wedding band.

“Congratulations,” I said. “I’m very happy for you.”

She ignored that comment. “I can’t believe you’re here.”

I spread my arms. “I heard there would be great passed hors d’oeuvres. It’s hard to keep me away from those.”

I shrugged while my heart turned into dust and blew away.

“Everyone said you’d never show,” Natalie said. “But I knew you would.”

“And you still love me.”

She waved the ring in my face.

“Honey?” Todd and his facial hair came around the corner. He spotted me and frowned. “Who is this?”

But it was clear that he knew.

“Jake Fisher,” I said. “Congratulations on the nuptials.”

“Where have I seen you before?”

I let Natalie handle that one. She put a comforting hand on his shoulder and said, “Jake has been modeling for a lot of us. You probably recognize him from some of our pieces.”

He still frowned. Natalie got in front of him and said, “If you could just give us a second, okay? I’ll be right there.”

Grudgingly he said, “Okay. But don’t be long.”

He gave me one more hard look and started back around the chapel. Natalie looked over at me. I pointed toward where Todd had vanished.

She tilted her head a little. She knew what that head tilt did to me. “Promise me you’ll leave us alone.”

I just stood there.

“Promise me you won’t follow us or call or even e-mail.”

The pain in my chest grew. It became something sharp and heavy.

“Promise me, Jake. Promise me you’ll leave us alone.”

Her eyes locked on to mine.

Without another word, Natalie walked away, back to the front of that chapel toward the man she had just married. I stood there a moment, trying to catch my breath. I tried to get angry, tried to make light of it, tried to shrug it off and tell her it was her loss. I tried all that, and then I even tried to be mature about it, but I still knew that this was all a stall technique, so I wouldn’t have to face the fact that I would be forever brokenhearted.

I stayed there behind the chapel until I figured everyone was gone. Then I came back around. The minister with the cleanly shaven head was outside on the steps. So was Natalie’s sister, Julie. She put a hand on my arm. “Are you okay?”

The minister smiled at me. “A lovely day for a wedding, don’t you think?”

I blinked into the sunlight. “I guess it is,” I said, and then I walked away.

I would do as Natalie asked. I would leave her alone. I would think about her every day, but I’d never call or reach out or even look her up online. I would keep my promise.