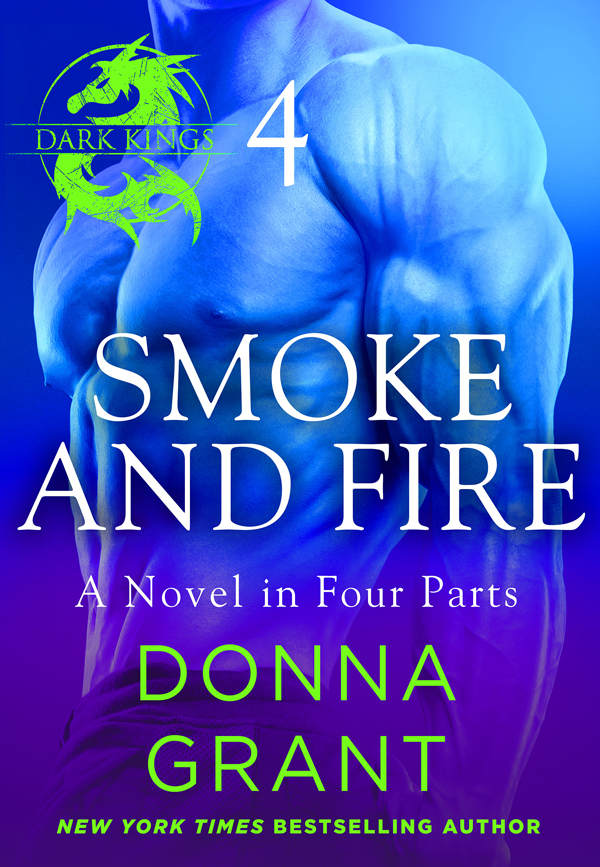 You helped save my sanity.

I owe you. So pick your Dragon King!

To my editor, Monique Patterson, miracle extraordinaire. Sums you up perfectly!

To my agent, Nattanya Wheeler, for always being ready with an answer no matter what my question might be. And for our mutual love of wine, pasta, hunkkky guys, and the written word.

To everyone at SMP who was involved in getting this book ready including, Alexx, Errin, Amy, the truly amazing art department, and marketing. Y’all are astounding. Thank you!

A special thanks to my friends and family for the endless support and love.

Ryder wanted to stay just where he was. It didn’t matter that the floor was hard, because Kinsey was in his arms. Something had happened when they made love. He felt certain that she would open her heart to him again.

But there was so much hanging over their heads. Until he could show absolute proof of her innocence, everyone at Dreagan would be wondering about her. Ryder didn’t want Kinsey subjected to that in any form.

He kissed Kinsey’s forehead as she slept. Then he gathered her in his arms and got to his feet. Ryder used his foot to pull back the covers before he lay her down.

Once she was covered, he gave her a light kiss on the lips. “I’ll be back soon,” he whispered.

Ryder gathered his clothes. He yanked on his jeans and slid his arms into his shirt, but didn’t fasten either. He grabbed his boots and slipped from the room.

In the corridor he put on his boots and buckled his pants. It wasn’t until he went to button his shirt that he found himself laughing as he recalled Kinsey yanking it open, popping off the buttons.

Ryder ran a hand through his hair and left the shirt open as he walked to the computer room. He was at the door when Dmitri walked out and stared at him in surprise.

“I expected you to take another night off,” Dmitri said.

Ryder shook his head. “There’s too much going on.”

“You can say that again. I’m glad you’re here. Most of the e-mails have been decoded.”

It was the concern in Dmitri’s gaze that alerted Ryder. “How bad is it?”

Ryder pushed past him and entered the room. He hurried around the monitors to see Thorn rubbing his eyes before looking back at the screen.

As soon as Thorn spotted him he said, “Am I ever happy to see you.”

Ryder sat in his chair and took a few seconds to look at each monitor. MI5 hadn’t done anything out of the ordinary the entire day, which was expected with the weather.

The facial recognition software had finished scanning Ireland with no sign of Ulrik.

A smile began to form when he saw an alert on one of the monitors showing a capture from a CCTV of Ulrik outside The Silver Dragon in Perth. At least they knew where Ulrik was now.

Ryder’s gaze landed on the screen before Thorn with the pictures of every Sam MacDonald who owned a business. He then turned his eyes to Thorn.

“None of them were Ulrik,” Thorn said, regret and anger filling his voice.

Damn. That’s not what Ryder wanted to hear. “Esther seems too smart to be fooled by a name. She’s MI5. She’d check the name and the business.”

“We’re going to show her a picture of Ulrik and see if he’s Sam MacDonald,” Ryder said. “I doona know how Ulrik is keeping himself so well hidden, but he’s doing a great job of it.”

Thorn cleared his throat. “You need to read the e-mails your software decrypted from Kyvor.”

With a touch of a few keys, the folder was open on Ryder’s monitor. He read them from the oldest to the newest. The first, dated five years prior, merely referred to Dreagan without actually naming it. But with each e-mail sent at the middle of each month, it became clear that those at Kyvor were looking into Dreagan and the Dragon Kings.

What froze Ryder’s blood was when he spotted an e-mail dated the exact month and year he first met Kinsey. He clicked open the e-mail and read in shock.

“DK #12 has shown interest in a human female. You’ll be delighted to know she works for us—Kinsey Burns. For now I suggest we don’t interfere and see how far the connection goes.”

Ryder wanted to hit something. No. He wanted to kill whoever this was. It proved that these people had been watching the Kings for far longer than anyone knew.

All his cameras, all his software and gadgets couldn’t alert him that they were being watched. Not even their dragon magic could do that.

He blinked and found Thorn looking at him with concern. A glass of whisky was set in front of him. Ryder swung his head around to see Dmitri take Kinsey’s chair.

“I brought a couple of bottles,” Dmitri said. “I think we’re all going to need it.”

Thorn took his glass and drained it. “Con already left for Paris. We’ve got until tomorrow evening to sort this out.”

He ignored the glass of whisky and read the next few e-mails. They didn’t say anything of importance, just listed how often he’d been seen with Kinsey.

It wasn’t until six e-mails later that he felt as if he’d been blasted with Dark magic. He reached for the whisky and tossed it back. No sooner had he set the glass down than Dmitri refilled it.

Ryder drank that one as well before he could face the screen again and take in what he’d read.

“We’ve made contact with KB. She’s receptive to our offer. Will proceed with the plan.”

“You doona know what the offer was,” Thorn said.

Dmitri grunted. “It’s obvious they’re using her to get to Ryder.”

Ryder didn’t know what to believe. He knew what his heart told him, but his mind was telling him something else entirely. Was he so in love that he hadn’t seen he was being betrayed?

Ryder wanted to destroy the entire room with a round of dragon fire, but he found himself clicking on the next e-mail instead.

For the next several, the focus was on him and his movements. His watcher seemed irritated that he’d not seen Ryder doing anything magical nor had he witnessed Ryder shifting.

Ryder noted the date of the next e-mail he was to open. It was a month after he’d left Glasgow. In all his life he’d never felt nervous about anything, but the emotion was filling his gut now to the point he felt ill.

Dmitri shoved the glass of whisky into his hand. It must be that bad for them to prepare him ahead of time. Ryder took a deep breath and opened the e-mail.

From then, his watcher focused entirely on Kinsey. He was the one taking pictures of her and filing daily reports of her comings and goings. But these second reports were going to the group Ryder had yet to discern.

Thorn pointed to the screen. “You can skip the next ten. The e-mails don’t say much other than he miscalculated the depth of her hurt. Whatever his plan was got pushed back.”

Ryder still went through each e-mail. He didn’t want to miss anything. It could be a single word usage that gave him a clue to something later.

When he came to the e-mail Thorn had told him to skip to, Ryder didn’t hesitate. He opened it immediately.

That’s all the e-mail said, but it left Ryder cold. It was dated nearly fourteen months after he’d left. He’d been watching over her all that time, but only checking in to make sure she was all right. He hadn’t watched her every move.

Ryder stared at that single sentence for several minutes. He’d truly believed Kinsey was innocent. Even Dmitri had said her reactions were those of someone not hiding anything.

Could they’ve been so wrong?

“Ryder, you may no’ want to hear this, but I think we should have someone watching Kinsey,” Dmitri said.

He nodded, knowing Dmitri was right. “She’s in my room,” Ryder said.

A moment later Dmitri said, “Anson is standing outside the door. If she wakes, he’ll bring her straight here.”

Ryder looked at his two friends, neither of who would hold his gaze for long. Ryder had staked his life on Kinsey’s innocence.

The only thing that kept him seated was knowing that none of the Kings or their mates could be killed. But there was much he’d shown Kinsey. All of which she could easily take back to Kyvor and hand over.

Ryder clicked on the next e-mail. One by one he read until he came to the latest one, sent just a few weeks earlier. All of them discussing KB’s progress and how she’d taken to their program with ease.

He was numb. Utterly and totally numb.

The woman he loved had come to betray him.

Was this hollow feeling what Ulrik once experienced? Had Ulrik felt as if he didn’t know which way was up? Did Ulrik have the desire to hurt, to maim—to kill?

It was no wonder Ulrik had begun slaughtering the humans. It’s the same thing Ryder wanted to do. Because it was mortals who couldn’t leave the Kings alone, who kept meddling in their affairs as if it were their right.

Ryder slowly pushed away from the computers. The mixture of sorrow, distress, pain, and rage were about to erupt.

“I doona need to remind you MI5 is still here,” Dmitri said.

But his voice came as if from a great distance. Ryder stood, the need to shift so great he had to fight the urge to remain in human form.

Someone was shouting his name. He heard them, but there was no need to answer. Ryder knew what he had to do. Because he wasn’t going to let Con or any of the others take what was his right—bringing Kinsey to justice.

And this was how she repaid him?

She’d ripped his heart out with nary a thought. He’d wondered if she wanted revenge for his leaving, and now he knew. But it was going to end that night.

The Pot Thief Who Studied Pythagoras by J. Michael Orenduff
Mary Mae and the Gospel Truth by Sandra Dutton
The Perils of Skinny-Dipping by J A Sandilands
The Wish Pony by Catherine Bateson
Deus Ex - Icarus Effect by James Swallow
Heart of Thunder by Johanna Lindsey
Diva (Jit'Suku Chronicles) by Bianca D'Arc
My Life as a Book by Janet Tashjian
Seducing the Baker (At First Sight) by Janet Lane-Walters
The Island of Heavenly Daze by Angela Hunt