Read Social: Why Our Brains Are Wired to Connect Online

Social: Why Our Brains Are Wired to Connect 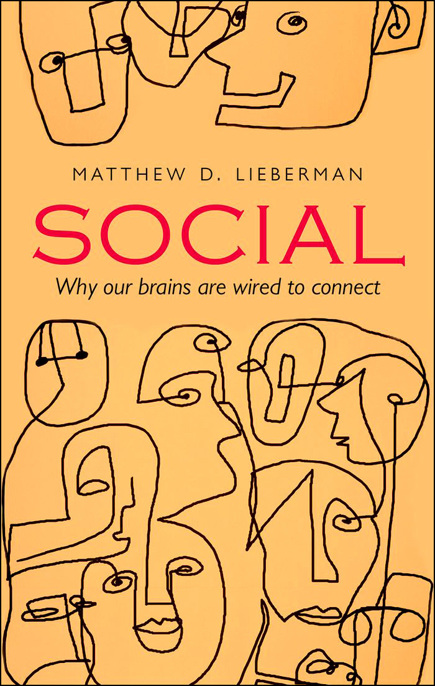 Why Our Brains Are Wired to Connect

The moral rights of the author have been asserted

All rights reserved.
No part of this publication may be reproduced, stored in a retrieval system, or transmitted, in any form or by any means, without the prior permission in writing of Oxford University Press, or as expressly permitted by law, by licence or under terms agreed with the appropriate reprographics rights organization.
Enquiries concerning reproduction outside the scope of the above should be sent to the Rights Department, Oxford University Press, at the address above

For Naomi and Ian,
who showed me what my social brain was for

10 Living with a Social Brain

11 The Business of Social Brains

C
enturies ago, the philosopher Jeremy Bentham wrote, “Pain and pleasure … govern us in all we do, in all we say, in all we think.”
There is little doubt that we are drawn to physical pleasure and work hard to avoid physical pain.
But do they “govern us in all we do”?
Is this all that we are?
I think they govern us far less than we typically assume.
The institutions and incentive structures of society operate largely in accordance with Bentham’s claim and thus are missing out on some of the most profound motivators of human behavior.

What Bentham and the rest of us typically overlook is that humans are wired with another set of interests that are just as basic as physical pain and pleasure.
We are wired to be social.
We are driven by deep motivations to stay connected with friends and family.
We are naturally curious about what is going on in the minds of other people.
And our identities are formed by the values lent to us from the groups we call our own.
These connections lead to strange behaviors that violate our expectation of rational self-interest and make sense only if our social nature is taken as a starting point for who we are.

Over the past two decades, my colleagues and I have created a new kind of science called
social cognitive neuroscience
.
Using tools like functional magnetic resonance imaging (fMRI), we have made startling discoveries of how the human brain responds to the social world—discoveries that were not possible before.
These findings
repeatedly reinforce the conclusion that our brains are wired to connect with other people.
Some parts of the social mind can be traced back to the earliest mammals hundreds of millions of years ago.
Other parts of the social mind evolved very recently and may be unique to humans.
Understanding how these mental mechanisms drive our behavior is critical to improving the lives of individuals and organizations.
This book will illuminate the neural mechanisms of the social mind and how they relate to making the most of our social lives.

CHAPTER 1
Who Are We?

I
rv and Gloria lived the American dream for more than half a century.
Depression-era children, they lifted themselves up from humble beginnings to become the toast of Atlantic City.
They met when they were barely teens and spent their high school years going steady.
Irv was admitted to Duke University, but then he signed up to serve his country as a naval pilot in World War II.
When he went off to training camp, Gloria went with him.
They were married just after the war and gave birth to two baby boomers who went on to become successful lawyers.
Irv built the house he and Gloria lived in with his own hands.
Later, he worked in real estate, and Gloria worked in his office with him.
They had a knack for the business, and it didn’t hurt that they had been savvy enough to purchase a few parking lots that the emerging casino industry would later want to snatch up.
Irv and Gloria were inseparable.
They lived, worked, and vacationed together.

At the age of sixty-seven, Irv learned that he had advanced prostate cancer, and he died soon after.
Irv’s death was a devastating blow to Gloria.
People deal with tremendous adversity all the time and find ways to move on, but Gloria never did.
She spent the rest of her days fixated on the loss of her partner, while her mind and memory slowly deteriorated.
Over time, she became a different person.
Before, she had always been charming and witty, if somewhat of a worrier.
After Irv’s passing, she became self-centered, inattentive, and even mean-spirited at times.

Gloria’s friends wondered what had happened to her as they abandoned her one by one.
Family struggled to put up with her moods and behavior.
Most of the explanations offered for the changes she had undergone focused on neurobiology.
Maybe she had some form of Alzheimer’s disease or dementia?
But nothing really supported such a diagnosis other than her growing memory loss.
Some asked whether the medication she was taking to deal with her acute grief had left her with long-term neurological damage.
Gloria, however, did not ponder such questions.
She knew what was wrong—she would rather have died than live another day without Irv.
I know this because she told me every chance she got.
She was my grandmother.
In her mind, she was dying of a broken heart.
Years later, when I asked my father what had led her to change so radically, he said, “She died the moment he died.
She didn’t have a happy moment after.”

Growing up, I had seen my grandparents as models of adulthood, of a strong, healthy marriage, and of the benefits of lifelong companionship.
I spent my early summers living in their house, the one that Pop Irv built.
I noticed how attentive and loving they were with each other and how they engaged with everyone else around them.
Today, like Irv and Gloria, my wife and I work in the same profession in offices that are 20 feet apart.
I learned from my grandparents that this is what it means to be happy.
Why is it that the same relationship that can make you so happy for so many years can make life feel like it isn’t worth living when the relationship is over or a loved one has passed on?
Why have our brains been built to make us feel so much pain at the loss of a loved one?
Could our capacity to feel so much pain be a design flaw in our neural architecture?

The research my wife and I have done
over the past decade shows that this response, far from being an accident, is actually profoundly important to our survival.
Our brains evolved to experience threats to our social connections in much the same way they experience physical pain.
By activating the same neural circuitry
that causes us to feel physical pain, our experience of social pain helps ensure the survival of our children by helping to keep them close to their parents.
The neural link between social and physical pain also ensures that staying socially connected will be a lifelong need, like food and warmth.
Given the fact that our brains treat social and physical pain similarly, should we as a society treat social pain differently than we do?
We don’t expect someone with a broken leg to “just get over it.”
And yet when it comes to the pain of social loss, this is a common response.
The research that I and others have done using fMRI (functional magnetic resonance imaging) shows that how we experience social pain is at odds with our perception of ourselves.
We intuitively believe social and physical pain are radically different kinds of experiences, yet the way our brains treat them suggests that they are more similar than we imagine.

Social
will focus on three major adaptations in our brains that lead us to be more connected to the social world and better able to take advantage of these social connections to build more cohesive groups and organizations.
The neural overlap between social and physical pain is the first of these adaptations.
It ensures that we will spend our entire lives motivated by social
connection
.

On October 21, 1984, President Ronald Reagan and his challenger, former Vice President Walter Mondale, held the second of two nationally televised presidential debates in the run-up to the presidential election.
President Reagan remained popular, but his support was softening in light of growing concerns about his age.
His poor performance in the previous debate, three weeks earlier, had opened the door to questions about his mental fitness.
If reelected, Reagan would become the oldest sitting president in U.S.
history (he was seventy-three at the time of the debate).
Reagan’s performance at this final debate is frequently cited as a turning point in the election,
when Reagan’s popular support solidified, contributing to the largest electoral landslide in history.

How did Reagan demonstrate that he was still in command of all of his faculties?
Did he display his erudition on the current issues of the day?
Did he play to his own strengths by vigorously attacking Mondale on issues like foreign policy or the tax code?
No.
It was Reagan’s comedic timing that allowed him to carry the day.
Reagan delivered a series of prefabricated one-liners with aplomb, regained his momentum, and never looked back.
The most notable zinger came when the moderator asked him if age was a concern in the election.
Reagan famously replied, “I will not make age an issue of this campaign.
I am not going to exploit, for political purposes, my opponent’s youth and inexperience.”
Mondale, not exactly a spring chicken
at fifty-six, later commented that he knew at that very moment he had lost the campaign.