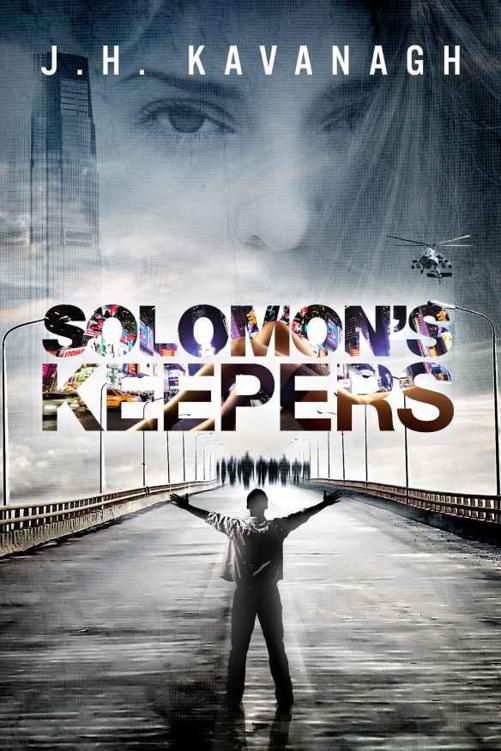 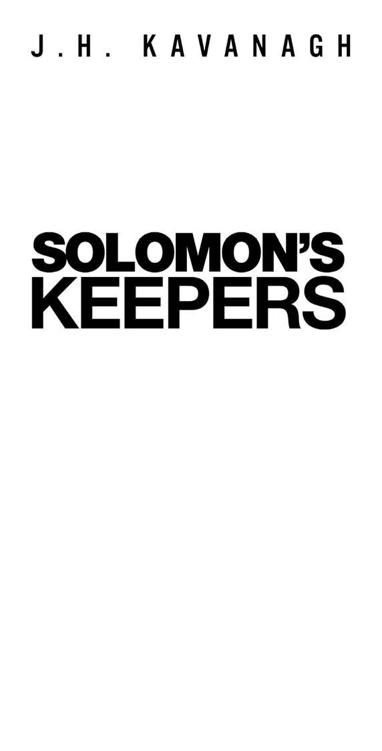 A sensational new entertainment is taking the world by storm. At its heart is Solomon, a microchip implant that is a stolen military secret.

Rees is a young man with a past that is coming to light; the woman they’d forced him to leave has made a shocking discovery and is now on a quest that puts her, the military, and a media empire on collision course. At stake are a tycoon’s ambition, national security, and two young lives.

With time running out, Rees has one final shot at freedom and a crucial decision to make. But how do you save yourself when your mind isn’t entirely your own?

Solomon’s Keepers
gives a close-up of the confrontation between technology and humanity – in one man’s mind and a whole society’s future.

J.H. Kavanagh has asserted his right to be identified as the author of this work in accordance with the
Copyright, Designs and Patents Act 1988
.

No part of this publication may be reproduced, stored in a retrieval system, or transmitted in any form or by any means, electronic, mechanical, photocopying, recording or otherwise, without the prior permission of the copyright owner.

Only a life lived for others is worth living.

The future is closer than you think.

Imagine the things you most wish you could do: the adventures, the encounters, the indulgences. Imagine someone who can do those things the way you dream of doing them. Now imagine that person sending you those experiences, recreating them inside your mind so you live every sensation more vividly than anything in the rest of your life. No effort, no risk, no weight gain – just each and every moment, happening to you.

Only losers live their own leisure.

That smell is his skull burning.

Each probe produces a whiff of scorched bone that bests even the chemical gunk they have smeared on his scalp. Amongst other things, that means he’s awake. Amongst so many other things, he’s alive. And at last this thing he’s been waiting for is happening.

The surgeon, Brodzky, is alternately a distant presence behind the plastic that separates them and then an immediate and intimate one as he zooms into each sizzling connection. Rees feels a piece of his skull give a tiny creak. He hears instruments clang, coverings crackle, measured voices murmur.

He doesn’t understand most of what they are saying, but like the tab in a foreign bar, he knows what it covers. It could be a recount in squiddish of all the promises, all the investment of other people’s time and money to get him here. One way or another he’ll be paying for the rest of his life. The thought produces an involuntary mumble.

‘Are you mumming wow now, Rees?’ More murmuring numbers. It doesn’t register so Brodzky does something to the plastic curtain and tries again, louder.

‘Uh huh.’ The young man says. He’s lying on a slope, his head clamped still under angry blisters of light. There’s no pain, but the awareness at the top of his head makes it a wasp sting, an ice hole and then a trapdoor they are clattering through with a ladder and buckets and reels of electric cable. They had said he wouldn’t feel it. But he’s imagining it. Actually, the detachment is quite entertaining.

He knows he didn’t hear that right. He’s lucid; he’s putting it all together. His memories are there, He knows it’s all still there with him; all the anticipation, the briefings, the tests and confirmations that took months to come to this conclusion are all lining up somewhere for recall in his newly windowed brain.

He remembers the bits about putting him out for the cutting, no nerve endings inside, and the need to keep him awake to check blood flow and neuro function. He remembers uniformed men in a room, chip samples the size of a thumbnail passed around reverently, the blown up image on a screen, and being part of something excitingly big: Next generation professionals; the thinking time has to come out, the clutter. Machines are getting smarter and we’re not. The collective nodding confirms the inevitability of it all.

‘I’m going to need you to do a few things for me – we’ll have a little chat and do some questions and answers about what you can see on the monitor and I’ll have some movements I want you to do – when I say, okay?’

‘Okay,’ Rees says. The big monitor high up to his left swaps a vague blue screensaver and a letterbox of text for a bright tile of white with a blue bird logo on it.

‘You remember what year you were born?’

‘Two thousand and one.’

‘The west country, near Hereford?’

‘Very nice. Can you clench your left fist for me? That’s great.’

‘And the right? Family still there? Mom and Dad?’

‘Any brothers and sisters?’

‘Good. Go to fourteen? And mapping three…and seven. Can you move your toes now please – left foot and then right. That’s good. What do you like to do, Rees? You must be into sport. You like soccer? Working out?’

‘Uh huh. Okay, now what can you see on the screen? Just call out what you see and say what colour it is, so, blue bird, green bottle, okay?’

‘Good, and the same again, please.’

‘Okay, just to let you know, Rees, we’re all set to go now. We just ease into the central callosum and we go to one side at a time. This is the tricky part and it takes a little while. We take you in and out and it may get a little weird so just stay with us while you can and enjoy the ride.’

The makings of a joke suggest themselves; leaving junk in a loft, but they can’t cohere. Then he imagines a parting, blood red curtains opening on a new movie.

‘You know, most guys your age think all life is between the legs,’ he says, ‘but this is where the real action is; left and right hemispheres, two million years of human culture and it all comes down to the tussle and teamwork between these bad boys. This is the crucible right here.’ And then he’s a washing machine again and the young man can hear that they are both talking but he has no idea what either of them is saying. The imaginary curtains have half closed on sky beyond and the ground rolling away as a green patchwork marble. A world of space and simplicity and the knowledge that everything connects, everything is energy and it reaches from his dissolving heart and bones all the way around the universe…Everything plays across him, he doesn’t have boundaries or form, he exists just where heat waves overlap enough to throw a shadow.

He thinks of Eva at the top of the steps, afternoon sun in her eyes and counting the buttons on her coat, the little black suitcase bobbing behind on tiny wheels as she comes down, her free hand twisting wind-blown red hair back into place. She looks vulnerable but poised, like lost cabin crew. And he remembers the last time, naked in shadow, her outstretched arm crossing a stave of light to retrieve a duvet that’s following him across the floor as he moves. Knowing but not knowing the choice he was making, that was being made for him. Not even wanting her to wake properly. Thinking there was more time, another way.

It shouldn’t have happened like this. He wanted her back. There had to be a way.

‘Rees, I want you to count down from twenty to zero, even numbers only, please.’

He thinks of Brett, the brother he’d lost. After all that had happened, he’d promised he’d make something of himself. Maybe, after all, he had; he would. He had to, it was a huge gamble.

‘For you? A few minutes. We’ll be here a while though. Got to close you up, make sure you’re airtight.’

‘How soon do you know if this is going to work? I mean – when can you say that it’s…Do you have to wait a while or…?’

‘You’re fine, just fine. It’s all going great. You’ll be up and at ’em in no time. You are now a member of a very exclusive club, young man. There’s a lot invested in this and a lot of people who will dearly wish to be able to do what you’ll be able to do. You’re going to show the way to a whole new world.’

‘How many have you done, I mean you personally?’

‘All of them. If I tell you I’ve been working on this in one form or another for ten years…’

‘Has it ever gone wrong?’

‘Before long you’re going to wonder how the rest of us get along without it: We’ll be second class citizens, lower orders. It’s a privilege, a lot of work. Like the first men on the moon.’

‘Leap. Small step for a man, giant leap for mankind.’

‘Oh yeah – giant leap. I want to ask you something…’

‘Do you think I’m still going to be me? To someone who knew me, I mean. Are the people you’ve known, who you’ve…are we still all the same as we were, better maybe, but the same people underneath? ’

Brodzky breathes out slowly. ‘You’re going to be better, sure, more than you ever were. Something special alright. And Mom’s going to know you and love you just the same; just a better version of you – that what you mean? The army’s going to love you a whole lot, like half a billion dollars more. You’d better believe it.’

His colleagues make what sound like corroborative noises back there behind the plastic.

He feels the older man’s hand rustling through to his shoulder. ‘Relax son, plenty of time for that later. You’re going to be fine. Better than fine – same old you but with some added capability. Just need to make some adjustment to learn how to use it, how to embrace it and not fight it. It really is a big leap. We’re going to help you learn how to deal with it. The whole team is behind you. Once Solomon – asserts itself – you will be in your element. You remember going swimming at the beach as a child? One minute you’re walking over rocks and tripping over your new fins that feel as clumsy as skis, next thing you’re out there swimming in the ocean and feeling like you were born a fish.’

But Rees is already fading into sleep.

Among the Living by Jonathan Rabb
Going Nowhere (A Romantic Comedy Novella) by Lauren, Kimberly
The Penwyth Curse by Catherine Coulter
Passing (Crusade) by Viguie, Debbie, Holder, Nancy
The Upside of Down by Susan Biggar
Fool Like You by Shade, Bella
When the Messenger Is Hot by Elizabeth Crane
Inside of a Dog: What Dogs See, Smell, and Know by Alexandra Horowitz
Yours Book 3: Life Mastered by Blue Saffire
The Grimm Chronicles, Vol. 2 by Ken Brosky, Isabella Fontaine, Dagny Holt, Chris Smith, Lioudmila Perry