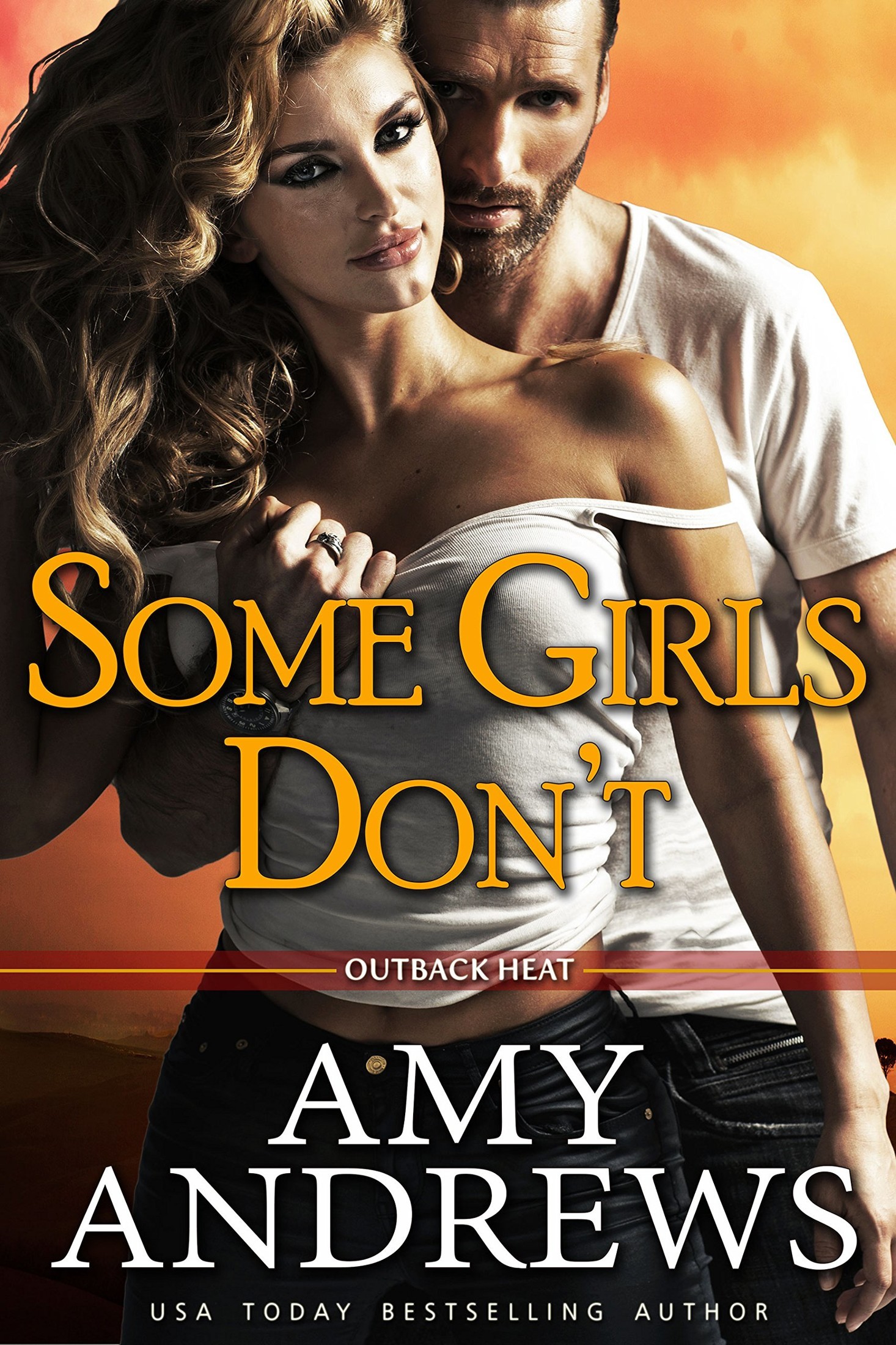 S
elena Durrum stared
at the guy up a ladder wearing not much more than a low-slung tool belt and a healthy sheen of sweat and remembered why she’d hightailed it out of Jumbuck Springs fifteen years ago and never looked back. The man she’d given her virginity to could still bring her out in a hot flush.

Another woman may have blamed it on the October sun belting down on her bare shoulders, but not Selena. She
owned
her hormonal crazy where Jarrod Weston was concerned. After all, the guy had been muddling her senses for as long as she could remember and, it seemed, even at the grand age of thirty-two, he still had the knack.

She took a deep breath.
Keep your shit together, Selena.
Three days. That was all. Just three days and she’d be gone again.

You can do this.

He reached for the hammer in his tool belt, his attention riveted to the guttering, or the eave or whatever it was he was fixing on her grandmother’s roof.
Her
attention was riveted to the width of his shoulders and the slabs of muscle slung between. The span of his ribs, the furrow of his spine and the dimples in his lower back were just as compelling.

She knew the contours of that back intimately. Well, maybe not
that
back exactly. Jarrod had always had a muscularity befitting his big-boned physique—nice biceps and shoulders—something she’d been able to hold on to as he’d loomed over her in those snatched, secret moments. But at seventeen there’d still been room for growth in his big frame.

He clearly wasn’t seventeen any longer.

All these years later he was most definitely a man. Everything had broadened. Strengthened. Thickened. His frame had filled out with layer upon layer of gloriously solid muscle.

She was, without a doubt looking at a man’s back now.

And, unfortunately, it was between her and the front door.

Selena took another deep breath and clutched at the warm metal of the gatepost.
She could do this
.

The gate squeaked as she pushed it open and his head swivelled instantly, his gaze sweeping over her as her foot landed on the front path. She faltered as they stared at each other for long moments and she thanked God for her sunglasses.

It wasn’t a question. It wasn’t a greeting. Just a calm statement of fact. His eyes didn’t widen even the slightest in surprise. Or shock. Selena supposed her grandmother had already told him she’d changed her mind about attending the school centenary celebrations.

Selena felt far from calm. Her heart crashed in her chest as foolishly as it always had when he’d looked at her so intensely. She’d been so in love with this guy, she’d barely been able to think of anything else.

She may have only been a teenager, but her feelings had been very grown up.

And here they were again. Granted, they’d both moved on, matured emotionally from those crazy hormone-addled feelings, but the physical attraction was definitely still there.

He slowly stowed the hammer back in his tool belt and descended the ladder. Selena watched him, helpless to look away as muscles all up and down his body shifted and moved in ways she found even more enticing at the age of thirty-two than she had at seventeen.

He walked a few paces towards her showing off the solid pillows of his pecs, the rhythmic bunch of his biceps and the sturdy strength of his compact abs. His skin, still as pale as she remembered – the curse of a red-head –, pulled taut across all that expanse, shrink wrapping him up in an enticing package. He still had no hair on his chest but there was a thin reddish-brown trail heading south from his belly button.

The trail was new. She’d have definitely remembered
that
.

The red-gold of his hair where it grew long and almost curly on top caught the sun in the same fascinating way it always had. The face scruff was also new. A sexy patchwork of red and gold with the occasional streak of grey. More than a three-day growth, less than a beard. Soft more than scratchy she’d bet …

He stopped and shoved his hands on his hips, his fingers fanning out over his abdomen. “You look good,” he said.

Selena almost laughed. Jarrod always had been one for understatement. She looked more than good. Her ash-blonde hair shone like a shampoo commercial, her cute yellow sundress bared her tanned shoulders and knees and clung to her waist and breasts. Her make-up was perfect and she had on her favourite leopard-skin slingbacks.

She looked
damn
good and they both knew it.

She hadn’t been gone so long that she couldn’t see he was still attracted to her. He looked the way he always had when he’d wanted to haul her into his arms but propriety had demanded he didn’t. Jaw tight, gaze fixed firmly on her mouth, his fingers drumming impatiently on his hip bones.

Except there was a fascinating maturity to his barely leashed self-control today. The frustrated teenager had become a potent man, the consequences of his very
adult
control snapping given much more scope now neither of them were seventeen. It was wildly thrilling, and she needed to
stop going there right now
.

“You should be wearing a shirt.” For her sanity and his skin cancer risk.

He gave a dismissive shrug. “I’m just about done anyway.”

“Is something wrong with the roof?” She put money into her grandmother’s account every week to cover
all
her expenses, including any contractors she needed to get in to maintain the ageing house.

“She should have rung a repair guy.”

“I don’t mind helping your grandmother out around the house.”

His tone was firm and brooked no argument. Of course he didn’t mind. That was the kind of guy Jarrod was.

“Let me pay you,” she said, turning slightly to forage in her handbag for her purse.

“I don’t charge
eighty-two-year-old neighbours
to knock in a few nails.”

Selena shivered at the low, ominous note in his voice. His jaw was tense again, his sea-green eyes stormy. She’d insulted him. She took her hand out of her bag. “Okay.” She cleared her throat. “Thank you.”

“How have you been?” he asked after a beat or two, so damn distant and polite now.

“I see you on the news every now and then. You’re doing well for yourself.”

“Yes. It’s been a crazy couple of years, a lot of travelling, but I’m next in line for the anchor spot.”

It had taken Selena twelve years’ hard work at Channel Four to be next in line for that chair.

He nodded. “That’s great. I know how much you always wanted it.”

Selena ignored the lack of celebration in his tone. She’d always been honest about her ambitions, and she was damned if she was going to apologise for them or the choices she’d made. “And you?”

“Can’t complain,” he said. “Doing what I love. Playing with fire and water and big shiny red engines.”

“Getting kitty cats out of trees?”

Normally she would have said that with a teasing tone. Normally he would have smiled, acknowledging their private joke. He did, but it was only a fleeting lift of his mouth.

“Living the dream,” he murmured.

Selena remembered when Jarrod used to smile a lot. When he used to smile at
her
a lot. One of his
hey baby
smiles could warm her at a hundred paces. Or that secret wicked smile of his that had never left her in any doubt as to
exactly
what he was thinking.

“It’s pretty dry at the moment.” The farm paddocks she’d passed on the outskirts had looked bare, the ground nothing but dust and stubble. The sheep that grazed them looking grey and scraggly. “I noticed the extreme fire danger sign on the way in.”

“Yes. The days are already stinking hot, and we’re not even in summer yet. A lot of the creeks are dry because we haven’t had any good rain for a couple of years, which adds to the hazardous conditions. The whole area is like a tinder box.”

Selena didn’t doubt it. She could already feel her skin starting to tighten from the heat in the air. It made her itch for her very expensive moisturiser.

“You are careful, aren’t you?”

Jarrod becoming a fireman had always scared the crap out of her. He’d volunteered with the rural fire service at sixteen and thinking about all the potential risks had driven her mad. One of the good things about being far away was not
knowing w
hen he was out there putting his life on the line.

He’d always teased her about her worries. Not this time, his quick “Of course,” dismissing her concern. Like fighting a fire was nothing.

“I was so sorry to hear about your mother,” Selena said, after an awkward pause.

Of all the things she’d missed while she’d been away, Selena felt most guilty about that. About not being here to support Jarrod during what must have been a truly heinous time in his life. Like she had been when his father, the Jumbuck Springs police chief, had been run down and killed on the job when Jarrod had been thirteen.

But the opportunity to work on the regional news team had arisen at the same time, and she’d feared how much a twice-broken Jarrod would dent her dedication to her career.

“I’m sorry I didn’t get back for the funeral.”

Of course it wasn’t fine, but she wasn’t going to pick at that scab.

More awkward silence followed as Jarrod continued to drum his fingers. They were standing a few metres apart on the path, but she could feel every thud of his fingers on her own belly.

She should go in to her grandmother, but she couldn’t move her feet. Maybe it was her destiny to endure this excruciatingly awkward reunion with the first man she’d ever loved. Maybe this was the price of coming back.