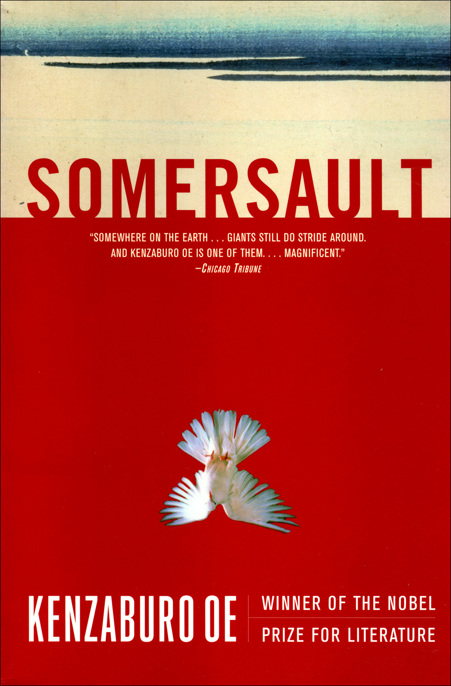 “[Somersault]
takes on great themes and does so in a persuasive and almost completely satisfying fashion.… When I reached the final scenes of this magnificent novel of ideas, I was more ready to mourn for the extraordinary world that was coming to an end. This side of Paradise, there’s still some comfort in the fiction that masters like Oe produce.”

“Everything, it seems, is here: religion, art, sex. . . terrorism, the fate of the Earth.”

“Full of arresting ideas and indelibly beautiful images . . .
[Somersault]
appears at a moment when apocalypse—whether through war, destroying the environment or terror attacks—has left the realm of fantasy and religion to become perfectly feasible.”

“The great questions of life are the golden thread running through the fabric of Oe’s opus.”

Nip the Buds, Shoot the Kids

The Catch and Other Stories

Teach Us to Outgrow Our Madness

An Echo of Heaven

The Crazy Iris and Other Stories of the

Japan, the Ambiguous, and Myself

Translated from the Japanese by
Philip Gabriel

All rights reserved. No part of this book may be reproduced in any form or by any electronic or mechanical means, including information storage and retrieval systems, without permission in writing from the publisher, except by a reviewer, who may quote brief passages in a review. Any members of educational institutions wishing to photocopy part or all of the work for classroom use, or publishers who would like to obtain permission to include the work in an anthology, should send their inquiries to Grove/Atlantic, Inc., 841 Broadway, New York, NY 10003.

Originally published in the Japanese language as
Chćgaeri
by Kōdansha (Tokyo)

The publisher gratefully acknowledges the following for permission to quote from the poetry of R. S. Thomas in “Chapter Four: Reading R. S. Thomas”:

Kunjana Thomas for permission to quote from
Between Here and Now,
Macmillan London Limited, 1981, for the poem “Threshold” (pp. 70-71).

Published simultaneously in Canada
Printed in the United States of America

17: There’s Power in the Place

18: Acceptance and Rejection (I)

A small figure was making its way forward—a man, it appeared, with extraordinarily well-developed muscles yet reduced in scale. Chest thrust out, he advanced into the gloom, clutching in his outstretched arms a structure made of two boomerang-shaped wings, one on top of the other. Narrow banners hung down in front of him; beyond that was a brightly lighted stage. Just as he bent down to pass by a switchboard that jutted out into the passageway, one tip of the wing of the structure plunged under the tutu of a dancer who was hurrying past.

The small man and the young dancer froze. The girl, bent forward, shifted her weight to her right leg, leaving her wide-open left leg defenseless, elevated in midair, yet somehow she was able to keep her balance. She glared at the small man, her anger evident at having been forced into this helpless position. Her little face turned bright red, like a sunlit plum. But what looked back at her wasn’t a small man. It was a boy—forehead, mouth, and ears protruding like those of a dog—yet with a strangely beautiful gaze.

The boy looked at her for the briefest of moments. In order to rescue the structure he supported in his outthrust arms, the boy tried to lift it up above the framework sticking out from the wall to his left, twisting the joint connecting the two wings in an attempt to slide one half upward. For her part, the girl, through her billowed-out skirt, shifted the structure toward her abdomen to absorb some of its weight, all the while keeping her left foot raised and balancing on the right one. From in front and behind the unfortunate pair, men in black leaned forward and jostled one another. At that instant, a flash of determination swept across the boy’s doglike face and he flung his structure straight down, scattering hundreds of multicolored plastic pieces.
Now free, the girl pressed down her bell-shaped skirt and flew off in tears to join the group of dancers beside the stage.

The young boy pushed forward with his narrow yet strong shoulders, shoving aside the taller black-suited men. Like a very small model of someone who’s just completed a grand project, he strode off into the dark of the passage behind the stage, a dignified exit undeterred by the shouts of the men. The dance troupe members halfheartedly consoled the girl, who was late, but they were concerned with their own costumes, and, besides, they’d missed their big chance that day to appear. The young boy, favored to receive the grand prize in the awards ceremony, had smashed to bits both his creation and any reason for him to make an appearance and had now disappeared.

Did destroying the model city he’d taken a year to create afford him a precocious, lawless sense of confidence—this boy who often fled from the center of Tokyo? Did seeing his creation as something whose sole purpose was to be broken to pieces make him wonder if even this huge metropolis could be razed if one wanted it to? But to what end? He had no idea, but there was plenty of time in life to try to answer that, or at least to formulate the question. This dog-faced boy, with his combination of breathtaking ugliness and beauty, must have been convinced of this, deep inside his still-forming body.

This episode took place at a public exhibition of imaginary landscapes of the future created from small plastic blocks, an event sponsored jointly by an American educational materials company and a Japanese firm that imported stationery supplies. In later years, Kizu, who had been on the screening committee, often recalled the boy who had arrogantly removed himself from the competition. Kizu could never forget how, when he first saw the boy at the exhibition, the word
child
didn’t come to mind, but rather the term
small man.
He recalled the boy’s moment-to-moment movements and expressions—at once so ugly you could barely bring yourself to watch, yet so lovely you felt your chest constrict—and the extraordinary vitality evident behind them. Because he was a painter, it was second nature to Kizu to want to scrutinize, over time, the details of the object of his gaze, so he was struck by a desire to watch each stage of development of this strangely compelling little lump of a child: childhood, adolescence, and youth. He felt sure that someday he’d be able to do this yet equally certain it would never happen, for even when the boy was right in front of his eyes, it had all felt like a dream.…

The autumn when the exhibition was held had marked a new start in Kizu’s life. Already in his late thirties, his major accomplishment was to be
short-listed for the Yasui Prize, but he had actually won several awards, which had led to talk of a “Kizu style” being mentioned in the same breath as that of the work of an artist who specialized in reproductions of classic paintings, the kind found hanging in European galleries. Even so, some people still continued to compare Kizu’s painting with the American Urban School, which led to his receiving a Fulbright to study at an American university on the East Coast well known in the field of art education. As with the majority of Japanese artists, this should have been nothing more than a simple rite of passage, but Kizu was genuinely interested in art education methods, and, in his typically intense and focused way he decided to go back to graduate school. This took five years, during which he divorced the wife he’d left behind in Japan. Now, several years later and PhD in hand, Kizu decided to say goodbye to life in the States and return to Japan.

Kizu had been asked to join the selection committee by its head, who’d been delegated the job by the corporate headquarters of the American company; the man had helped Kizu both during his Fulbright stay and after he extended it, and Kizu naturally felt obligated to him.

The creation the dog-faced boy came up with at the contest was amazingly inventive, yet what affected Kizu most was what radiated not from the work but from the boy’s looks and attitude—his entire
being.
It pained Kizu to realize that he himself lacked the archetypal aura the boy possessed. Even when he was living in America he’d felt his style of painting had reached a dead end, a feeling that surfaced in the conviction that he had no ground to stand on as an artist.