Read Something in the Water Online

Something in the Water 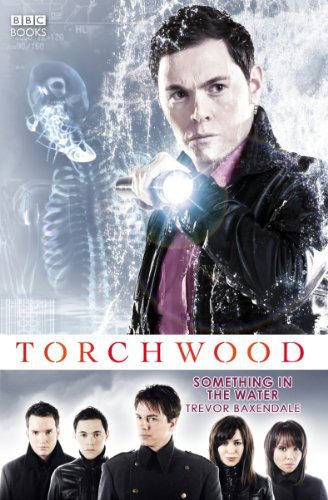 SOMETHING
IN THE WATER

Published in 2008 by BBC Books, an imprint of Ebury Publishing
A Random House Group company

© Trevor Baxendale, 2008
Trevor Baxendale has asserted his right to be identified as the author of this Work in accordance with the Copyright, Design and Patents Act 1988.

Original series created by Russell T Davies and broadcast on BBC Television ‘Torchwood’ and the Torchwood logo are trademarks of the British Broadcasting Corporation and are used under licence.

All rights reserved. No part of this publication may be reproduced, stored in a retrieval system, or transmitted in any form or by any means, electronic, mechanical, photocopying, recording or otherwise, without the prior permission of the copyright owner.

The Random House Group Limited supports The Forest Stewardship Council (FSC), the leading international forest certification organisation. All our titles that are printed on Greenpeace approved FSC certified paper carry the FSC logo. Our paper procurement policy can be found at
www.rbooks.co.uk/environment

For Martine, Luke and Konnie – with love, as always

The
Torchwood
series from BBC Books:

4. SOMETHING IN THE WATER
Trevor Baxendale

The late Bob Strong. That’s what they called him.

He’d been late all his life. Late for school, late for university lectures, late for dates. He’d even managed to be late when he was on a promise with Nurse Carrick, the lovely, gorgeous, drop-dead sexy Lucy Carrick. One flat tyre had robbed him of the night of his life and ever since then his hot and lustful affair with Juicy Lucy had been conducted entirely in his own imagination.

And so now here he was, late for surgery (again) and still lost in idle fantasies about Lucy.

He scrambled out of the car, grabbed his briefcase, then ran in through the sliding doors of the Trynsel Medical Centre. The waiting room, he noted with dismay, was already full of people coughing. Coughing quite badly, actually. Lots of tissues held to mouths and that curious, ripe smell of bacteria-rich mucus membranes. ‘It’s going to be a long day,’ he thought. ‘Just as well, with me being this late.’

‘Morning Dr Bob,’ called Letitia Bird, the receptionist. She was smiling, but it was a cruel smile. She enjoyed nothing more than seeing Bob arrive late and flustered. She’d had plenty of opportunities. Bob knew Letty fancied Trynsel’s senior doctor and practice manager, Iuean Davis, and held all the other GPs in complete contempt. That raised them only one level up from the rest of humanity, which she held in complete and utter contempt.

‘Of course not.’ Bob tried to flatten down the sticky-up hair on the back of his head. ‘It was the traffic. Backed right the way up the Caerphilly Road.’

Letty’s reply was little more than a slight pursing of her razor-thin lips.
If you say so
.

‘Ah! There he is,’ boomed a familiar Welsh baritone. ‘The luckiest bloody Englishman in Wales!’

Bob turned to see Iuean Davis approaching with an envelope. ‘In my hand I have a piece of paper …’ he began, and then laughed. ‘Actually, two pieces. Tickets to the RBS Six Nations match between England and Wales, no less. That’s one for you … and one for me, if my powers of mathematics haven’t bloody well deserted me.’

Bob stopped in his tracks, genuinely touched. ‘Iuean, that’s fantastic … Gosh, how much do I owe you?’

‘Nothing! My treat. Actually I got them free from an old college mate, but I’m not telling you that. And anyway, there’s always a down side, mind: it’s at the Millennium Stadium, so if the English beat us I will charge you for the ticket, and the bloody bus fare to boot.’

Bob grinned, clapped Iuean on the shoulder and thanked him again. ‘Look, I’ll catch you later, Iuean. I’m running a bit behind schedule.’

Bob collapsed into his surgery room and shut the door behind him. Then he threw his briefcase down on the floor by his desk and slumped into his chair. He sat for a minute and tried to get his breath back. He was feeling pretty grim this morning, he had to admit. He hadn’t drunk all that much the night before, so he hoped he wasn’t coming down with something. Come to think of it, he could feel the start of a sore throat developing.

Bob switched his laptop on and waited for it to request a password. His first patient was due in – he checked his watch – minus five minutes. Damn.

The intercom buzzed. ‘Are you ready for Miss Harden, Dr Bob?’ asked Letty with pointed innocence.

Saskia Harden! Bob felt his pulse quicken and his face start to blush. What the hell was she doing here? Quickly he brought up his diary on the laptop. Bloody hellfire! How could he have forgotten she was coming in this morning? Too much time thinking about Juicy Lucy Carrick, that’s how.

He tried to calm his hair down again – it seemed to be spring-loaded this morning – and then neatened up the papers and pens on his desk as best he could. One of the pens slipped out from beneath his fingers, skidded across the desk and rolled onto the floor. Bob leapt out of his seat, intending to circle the desk to retrieve it. But he tripped over his briefcase and stumbled sideways just as the door started to open.

Trying to save the situation, Bob converted his fall into an attempt to look as though he was leaning nonchalantly on his desk, but the angle of his body was way too steep. At forty-five degrees, one hand on the desk and the other on his hip, he looked absurd. And he knew it.

‘Hello, good morning, come in,’ he trilled to the creature that stepped into his surgery.

Saskia Harden was no beauty, but she had the kind of looks that turned people’s heads. Men and women. The fact that she had tried to kill herself on a number of occasions only added to the air of exotic mystery that had built up around her at Trynsel, and had led Iuean Davis to christen her ‘the Angel of Death’.

She was always cool, almost statuesque, with a face that looked as if it had been carved from some sort of smooth, living stone. Her eyes were smoky, amused, scornful, hopeful, all at once, as if she was somehow physically removed from everything and everyone else, acting only as an impartial observer.

Letty Bird had once described her as ‘that woman who always looks like she’s on the other side of a pane of glass’.

Saskia walked into the surgery and closed the door softly behind her. She was wearing a thin, light raincoat belted at the waist. Her legs were bare below the knee, apart from her shoes, and this gave the impression that she wasn’t wearing anything beneath the coat. Bob felt his pulse quickening.

‘Is this yours?’ she asked, bending neatly to pick up Bob’s pen.

‘Thanks, yeah.’ Bob straightened awkwardly, took the pen, tossed it carelessly onto his desk and watched it roll off the other side and drop onto the carpet again. ‘Look at me – all fingers and thumbs this morning.’ He laughed and sat down, indicating that she should take a seat as well.

Saskia Harden slid demurely into the patient’s chair opposite and smiled at him. She had the strangest smile but it was her eyes that captivated him. They seemed distant and yet extraordinarily focused, as if they could see things that no one else could.

Bob thought of them as the eyes of a predator, sizing up its prey from deep cover.

It was also hard to describe exactly what colour they were. It was almost too easy to say they were green, and not strictly accurate. Not quite green, then. Grey? Not really. Jade? No. Emerald? Absolutely not. Somewhere in between, perhaps. All of them and none of them, depending on the light and the time of day, whether she was indoors or outdoors, morning or afternoon or midnight. Her eyes had that kind of variable quality, what jewellers refer to as
chatoyance
. Bob even wondered if she used tinted contact lenses.

Suddenly realising that he had been staring deeply into her eyes for far too long as he tried to make sure, he found her smiling that smile at him again. The smile that made him think she either wanted to kiss him or kill him.

‘I’ve come back for my check-up,’ she replied, still smiling.

‘Of course.’ Bob turned to his laptop and quickly accessed her records. ‘Right, let’s see.’ He looked back up at her. ‘How’s it going? How are you feeling?’

She leaned forward, keeping his gaze. Her liquid, not-green not-grey eyes were mesmerising. ‘Dr Strong, I’ll be blunt: I need to find a man.’ When she spoke next, her voice was little more than a dark whisper. ‘I want to procreate.’

‘I see,’ said Bob, equally quietly, and then cleared his throat again. This time it was difficult, like there was a real cough there.

‘I think you can help me with that, Dr Strong.’