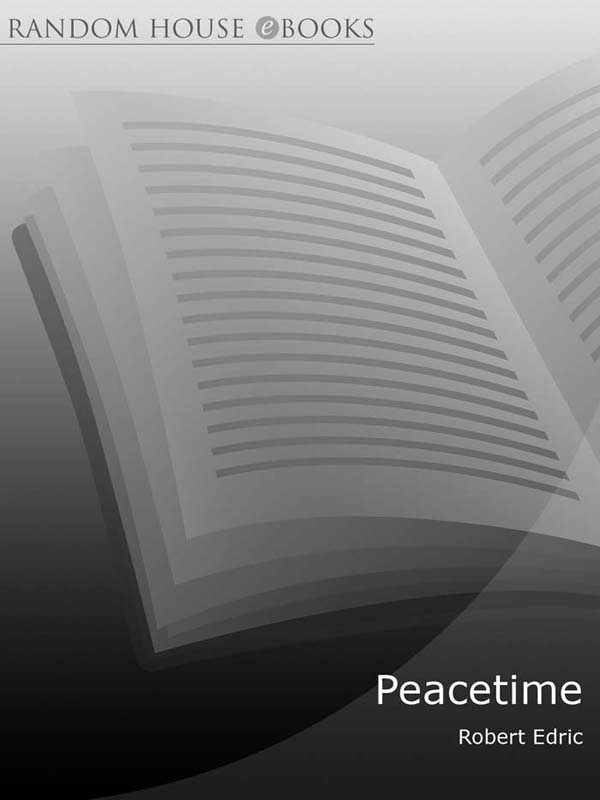 Originally published in Great Britain by Doubleday,
a division of Transworld Publisheers

The right of Robert Edric to be identified as the author of this work has been asserted in accordance with sections 77 and 78 of the Copyright Designs and Patents Act 1988.

Condition of Sale
This book is sold subject to the condition that it shall not, by way of trade or otherwise, be lent, re-sold, hired out or otherwise circulated in any form of binding or cover other than that in which it is published and without a similar condition including this condition being imposed on the subsequent purchaser.

for Lauren and Nathalie

Robert Edric's previous novels include
Winter Garden
,
A New Ice Age
,
Elysium
,
In Desolate Heaven
,
The Sword Cabinet
and
The Book of the Heathen
, which was shortlisted for the 2001 WHSmith Literary Award. His latest novel,
Cradle Song
, is now available from Doubleday. He lives in East Yorkshire.

âThere aren't many novelists whose new book I would read without question (Banville, Marias, Proulx) but I would read a new novel by the Yorkshireman, Robert Edric, even if its blurb told me that it was about a monk calculating how many angels could dance on a pinhead â¦ If other novels deserve this year's Booker Prize more than
Peacetime
, then they must be very remarkable indeed'
John de Falbe,
Spectator

â
Peacetime
has a seriousness and a psychological edge that nine out of ten novelists would give their eye teeth to possess â¦ it will be mystifying if, 50 years hence, Edric isn't taught in schools'
D. J. Taylor,
Sunday Times

âA marvel of psychological insight and subtly observed relations â¦ Why Edric has not yet been shortlisted for the Booker Prize is a mystery'
Ian Thomson,
Guardian

âEdric is one of those immensely skilled novelists who seems fated to be discovered insultingly late in a productive career when caught in the arbitrary spotlight of Booker nomination or television adaptation. Booksellers take note: this is a writer to put into the hands of people looking for “someone new”'
Patrick Gale,
Independent

âThis is a novel of ambition and skill, at once a historical meditation, an evocation of a disintegrating society and, perhaps most strikingly, a family melodrama â¦
Peacetime
deserves the recognition that Rachel Seiffert's Booker-nominated dÃ©but received in 2001'
Francis Gilbert,
New Statesman

âEdric's evocation of far horizons, tumultuous seas and drifting sands is masterly â¦ There are many memorable things in this novel â¦ Edric has cleverly created a microcosm to represent a world still haunted by its terrible past and uncertain of its future'
Francis King,
Literary Review

IN THE DAYS OF THE AMERICAN MUSEUM

THE EARTH MADE OF GLASS

THE BOOK OF THE HEATHEN

We think â although of course, now, we
very seldom

That the other side of War is Peace.

The girl came slowly towards him, and James Mercer watched her through his binoculars, convinced that he could not be seen by her. He adjusted his lenses and brought her more sharply into focus, his elbows sinking deeper into the fine sand which was already beneath his shirt and in his boots.

It had not been his intention to spy on her. He had been watching for the lorries carrying the labourers, already an hour late, when she had come unexpectedly into view. In the week since his arrival, this was only the second time he had seen her. She walked with no apparent purpose or destination, frequently pausing to look around her. And watching her, even at that distance, Mercer sensed that she gained some small pleasure from being so alone and so aimless. The road was narrow and badly worn, and led only to the houses and abandoned buildings at its end.

The sun was high, and in the opposite direction the line of the road was molten in the haze, its boundaries
lost to the drifting sand which came and went from its margins.

The dunes in which Mercer lay provided the only natural vantage point for miles in any direction, and he had gone there to watch for the approaching vehicles so that he might be ready for the men upon their arrival. They were an unwilling workforce and delayed each day's start for as long as possible. It was his intention that particular morning to watch for them coming and then to start up the generators before they arrived, filling the still air with their pall of blue smoke, and hopefully suggesting some degree of urgency about the work ahead.

He looked beyond the girl along the line of the road, marked to the horizon by telegraph poles, but saw nothing. Little other traffic used the road. His own convoys â seldom more than ten or twelve lorries â were often held up by the narrow bridges, and by vehicles coming in the opposite direction. The open expanse of land, sea and sky joined seamlessly all around him.

He lowered the glasses until the girl was once again in focus. She had stopped walking and was now leaning against a post. She brushed the sand from her feet and calves. She wore no shoes. She shielded her eyes and looked around her, pausing briefly â or so it seemed to Mercer â when facing in his direction. He knew she would have seen no light reflected from his glasses because he had gauged the position of the sun before settling himself into the dunes. The act of checking, and then of ensuring that he broke no skyline, had become second nature to him, and realizing what he was doing made him smile.

He raised his head slowly. The girl no longer stood against the post. He scanned the road on either side of
this, but saw nothing. He searched the levels beyond, but there was still no sign of her. He raised himself further to take in the wider view, and only then did he see her rise from where she had been sitting a short distance from the post. She straightened the simple dress she wore and resumed walking. It occurred to him that she had been deliberately hiding from him, letting him know that she knew he was watching her, but he saw by the same casual manner in which she resumed her walking that this was unlikely. He let himself sink back into the sand, feeling its warmth against his arms.

He lay with his eyes closed for several minutes, knowing how easily he might succumb to this comfort and warmth and allow himself to fall asleep, but even as he considered this he heard the distant rasp of an engine as the first of the approaching lorries negotiated a bend in the road. He raised his head and saw them coming, relieved that he might now continue with the work he was there to undertake, and at the same time disappointed that his time alone was at an end.

The path behind him, at the landward side of the dunes, would take him quickly back to the excavations, where he might start his preparations in advance of the others.

He rose to leave, and as he did so he saw that the girl was now on the road directly beneath him and that she was watching him. Her eyes were lost to him in the shadow of her hands, only her mouth remained visible, and he knew that she must have run to have come so far from the post in such a short time.

âI was waiting for the lorries,' he said. He indicated the vehicles, still distant and slow-moving, their exhaust smoke hanging like dust behind them.

The girl made no acknowledgement of this.

He felt uncomfortable, imagining he was about to be accused by her.

âWe're working on the new Station,' he called down to her.

She said something he did not hear.

âI said we know who you are.' She took several paces towards him, her bare feet sinking into the sand of the dunes.

âI ought to be getting back there for when they arrive.'

She waited where she stood.

âNice meeting you,' he said.