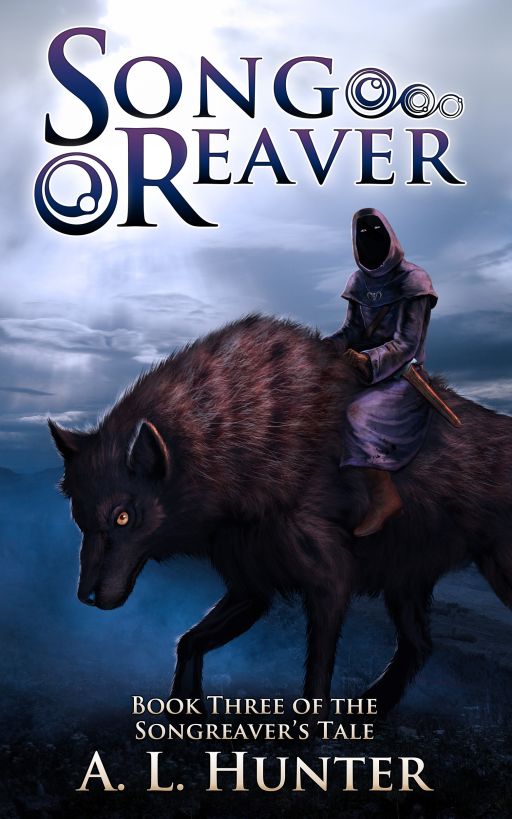 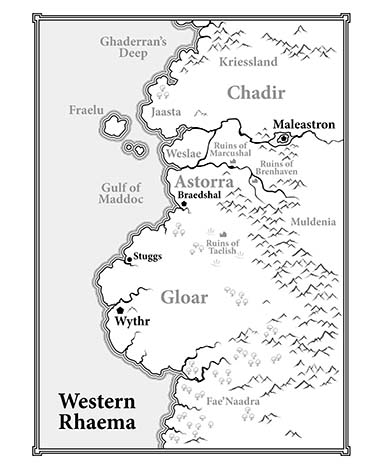 Discover other titles by Andrew Hunter at
Smashwords.com

This ebook is licensed for your personal enjoyment
only. This ebook may not be re-sold or given away to other people.
If you would like to share this book with another person, please
purchase an additional copy for each recipient. If you’re reading
this book and did not purchase it, or it was not purchased for your
use only, then please return to Smashwords.com and purchase your
own copy. Thank you for respecting the hard work of this
author.

The grundlewyrm's tail exploded with a loud,
wet
BANG
, showering Garrett with glowing green ooze. He
stared in shock at the tailless body of the dog-sized reptilian
creature as it slipped from his fingers and wriggled on its stumpy
legs back into the cool, dark soil with an angry, grumbling snort.
Garrett fought the urge to vomit, not daring to open his mouth for
fear that some of the dripping goo that covered his face would get
inside. He knelt in the mud and looked down at his empty,
slime-covered hands.

Marla stared at him from where she knelt,
just a few feet away. Flecks of lambent slime clung to her gray
smock, marking the outer radius of the grundlewyrm's blast. Her
long dark hair, tied back into a ponytail, had been spared the
worst of it, but she reached up to wipe a glob from her cheek. She
succeeded only in leaving a greenish streak that glowed against the
soft shadows of the twilight swamp. She snorted with stifled
laughter.

Garrett gave her a pleading look. Marla
cleared her throat, and smiled apologetically.

Garrett lifted his arm to try to wipe his
face clean with the back of a filthy sleeve.

Garrett groaned, still not daring to open his
mouth. A large gobbet of slime had now worked its way down to cover
his right nostril, forming a little green bubble there each time he
exhaled.

Marla got to her feet and covered the
distance between them in two easy strides. Garrett envied her
sure-footed grace. He had fallen down in the mud at least three
times on their way to the wyrm burrows, and had practically taken
up permanent residence in the muck upon arrival. Marla seemed
perfectly at ease here, as she did everywhere, but then she was a
vampire.

Marla knelt beside him and lifted Garrett's
wooden collection bowl beneath his chin. She took the little wooden
paddle that she had given him to milk the worms and used it to
gently scrape the green slime from his face.

Garrett watched her work, her dark eyes
focused intently on his face. A warm, buzzing sensation spread
through his body as her cool fingers brushed against his cheek. His
breath faltered, catching in his throat. Marla's eyes lifted to
his, and she smiled. She set the bowl aside and rubbed the last of
the slime from Garrett's lips with the tail of the long bandana
that Garrett wore to cover his head and neck.

"You can't grab them by the tail," Marla
sighed.

Marla looked down at his collecting bowl. A
small pool of wyrm ooze barely covered the chunks of mud at the
bottom of the bowl. Some sort of water bug pranced across the
surface of the glowing liquid. "How many have you caught?" she
asked.

Garrett hesitated a moment before replying.
"Two," he said, "counting the poppy one."

"Well, I've been a bit luckier," she said.
"So, if we can catch three more, I think we can head back to
camp."

"Yeah," Garrett said, his eyes falling. Then
he thought of something. "Couldn't you just... magic them up out of
the ground or something?"

"I mean like the way you catch fairies...
with dragon magic," he said.

Garrett struggled for a moment with the
question that was churning around inside of him. "But... they don't
want
to do what you say. Why would they agree to do it?"

Marla's expression darkened momentarily.
"With the faebloods," she said, "their very lives are but a chorus
of the great Song. They are bound to it with ties far stronger than
any individual's will. Being a human, you wouldn't understand
that."

"You're a human too!" Garrett said, his voice
a little harder than he had intended it to be.

"Yes you are," he said, reaching out to lay
his hand on her sleeve, "You're just a human like me, but you and
your mom got some sort of magic stuff in your blood from a long
time ago, and it makes you a little bit different. You're still
human though!"

Marla let out a little laugh. "Oh, Garrett,
it isn't that simple."

"Marla, you can do whatever you want,"
Garrett said, "You don't have to do what the other vampires say."
He paused for a moment, taking a breath. "You and your mom could
come live with Uncle and me. I know he'd be fine with it!"

Marla gave him a sad, sweet smile. "Garrett,"
she said, "if they call us home, we
have
to go back. We
don't have a choice. We're like those fairies in the pet shop. My
mother and I are bound by the same Song. We are bound right down to
our blood. You just can't see the bars of our cage."

"No," Garrett said, "That place isn't your
home. It isn't home because you don't want to be there."

Marla put her hand on his. Caked in mud and
slime, his hand looked just like any other boy's, his scars hidden
beneath a thick coat of grime.

"Garrett," she said, "you're my best friend,
and I don't want to go away and leave you behind."

"No one's even made a decision yet," Marla
laughed, "We're probably worrying for no reason... Let's just
finish up here and get back to camp."

"Yeah," Garrett said, his voice barely
audible. He pushed one hand down, deep into the cold mud, lifting
himself to his feet. He picked up his wooden knife and bowl,
careful not to spill any of the precious essence and looked around
for a firm piece of ground.

The mud sucked at his loose Chadiri boots as
he stamped his way toward a hummock of dry grass. The red leather
of the boots was probably stained a permanent shade of swamp by
now, but that suited him well enough. He'd seen enough red as a
prisoner of the Chadiri war priests.

He set down his bowl and rubbed at the memory
of shackles on his wrists. Those wounds had already healed, just a
new set of scars to add to his collection.

"So, where do we dig now?" Garrett asked,
weary of the whole endeavor.

"Yeah," he said, turning to face her.

Marla straightened to her full height in the
center of the muddy burrowing grounds. Her ragged, mud-spattered
smock and dirty trousers gave her slender form the appearance of a
used-up scarecrow, but her face shone, as pale and perfect as
carved marble. She smiled an impish smile.

"Would you really like to see some magic?"
she asked.

"I told you that the grundlewyrms aren't
intelligent enough to be bound by magic," Marla said.

Marla's smile spread into a grin. "Their
blood still knows the words to the Song."

Marla balanced on one leg as she tugged one
of her boots off and tossed it onto the grass. Black mud oozed up
between her toes as she put her weight onto her bare foot and
lifted the other to remove the second boot.

She tossed the second boot to join the first
and spread her feet slightly apart, shifting her weight from one to
the other as she drew in her breath. Lifting her arms to her sides,
she began to sing, softly, in the language of dragons.

Marla's feet lifted, one at a time, and came
down again on the wet, black earth, moving in the slow steps of an
ancient dance. Her body twisted, her arms held out for balance, as
she spun and leapt to the rhythm of her song. Her feet did not sink
into the mud now; neither did it seem to stick to her skin as she
stepped lightly across its surface.

Her voice grew stronger, her words
reverberating with the thrumming undertones of draconic magic.
Garrett felt the vibration through the wooden bowl in his hand, and
he looked down to see little ripples of force upon the surface of
the glowing essence contained within.

"
Dae'Kheretae!
" Marla shouted,
punctuating the end of a chorus of her song, and the essence nearly
leapt out of Garrett's collection bowl.

Each time she repeated the phrase in the
rhythm of the song, the glowing essence danced and leapt.

Marla seemed to be dancing in circles now,
her eyes focused on the ground. With a sudden movement, she
stooped, driving her slender hand beneath the surface of the mud.
She pulled it out again, just as quickly, with a wriggling
grundlewyrm caught securely in her grasp.

Garrett gasped in surprise, but Marla did not
slow her dance. She drove her other hand into the mud and pulled up
another wyrm before pirouetting with both of the struggling
creatures held at arm's length.

She suddenly dropped low on the balls of her
feet then leapt again, tossing the two wyrms high into the canopy
of leaves above. Her body blurred as she thrust both hands down
into the ground again and yanked out the largest grundlewyrm that
Garrett had yet seen in his short career as a wyrmhunter.

Marla stepped quickly to the left and right
to catch the pair of wyrms that just now tumbled down from the
trees above, gathering the squirming trio of glow-tailed wyrms in
her arms. She sang the final words of her magic song and bowed
deeply to Garrett as a shower of brown leaves rained down on the
field of her victory.

The sounds of Garrett's cheers and laughter
mingled with the droning buzz of insects as night fell over the
swamp.

Garrett let out a grateful breath when
Marla's gaunt landed in the moonlit clearing near the camp of the
Gloaran army. Landings were always the worst, seeing the ground
rushing up at him like that. Most of the time, he kept his eyes
closed for the last bit and hoped for the best. Marla, for all of
her natural talent, was still a novice flyer, and her control of
the great, faceless bat creatures sometimes waivered.

Garrett slid off the gaunt's bristly back,
his legs a bit wobbly beneath him from having clenched so tightly
to the creature's ribs during the flight. The gaunt let out a
clicking hiss that turned into a rattling purr as Marla stroked the
creature's mane. She whispered a few words of thanks to the beast
and dropped from its back with silent grace. The gaunt ducked its
black head and stalked off on its gangly legs to hide itself among
the trees.

Marla passed Garrett the leather satchel that
held two full canisters of essence, the fruits of their evening's
labor. Garrett shouldered the bag and walked beside her as she
headed down toward the trailhead that led to the main camp. He
glanced back, wondering if they should do something about the trail
of dried mud flakes left by his boots with every step he took on
the long, lush grass of the hill.

Rainsinger by Barbara Samuel, Ruth Wind
Big Italy by Timothy Williams
The Visitor by Wick, Lori
Five Get Into a Fix by Enid Blyton
Significance by Shelly Crane
Revenant by Larissa Ione
Her Little Black Book by Brenda Jackson
Have Mercy On Us All by Fred Vargas
Siege Of the Heart by Elise Cyr
When a Gargoyle Awakens by Price, E A