Read Songs for the Missing Online

Songs for the Missing 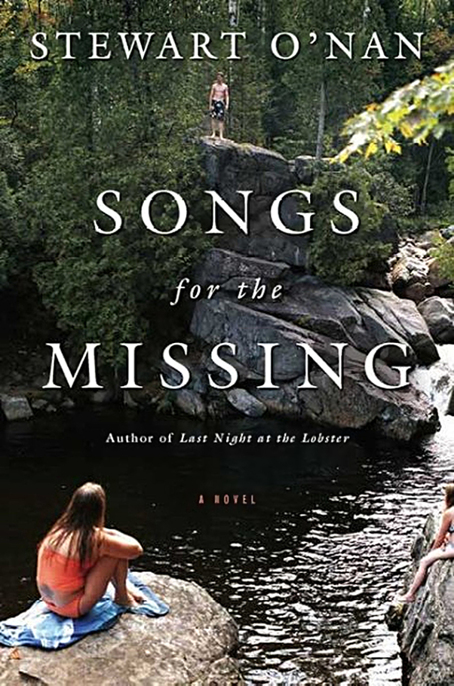 Description of the Person, When Last Seen

Another Kind of Lie

The Right to Disappear

Hello, My Name Is

The Killer Next Door

Faithful
(with Stephen King)
The Circus Fire
The Vietnam Reader
(editor)
On Writers and Writing
, by John Gardner (editor) 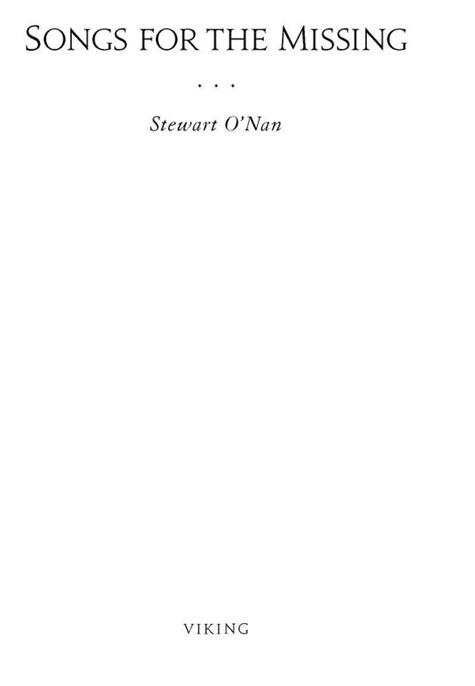 VIKING
Published by the Penguin Group

First published in 2008 by Viking Penguin, a memeber of Penguin Group (USA) Inc.

For Trudy and Caitlin and Stephen

Description of the Person, When Last Seen

July, 2005. It was the summer of her Chevette, of J.P. and letting her hair grow. The last summer, the best summer, the summer they’d dreamed of since eighth grade, the high and pride of being seniors lingering, an extension of their best year. She and Nina and Elise, the Three Amigos. In the fall they were gone, off to college, where she hoped, by a long and steady effort, she might become someone else, a private, independent person, someone not from Kingsville at all.

The sins of the Midwest: flatness, emptiness, a necessary acceptance of the familiar. Where is the romance in being buried alive? In growing old?

She did not hate the town, as, years later, her sister would tell one lover. Not Kim, not the good daughter. She loved the lake, how on a clear day you could see all the way to Canada from the bluffs. She loved the river, winding hidden in its mossy gorge of shale down to the harbor. She even loved the slumping Victorian mansions along Grandview her father was always trying to sell, and the sandstone churches downtown, and the stainless steel diner across from the post office. She was just eighteen.

At the Conoco, on break, she liked to cross the lot and then the on-ramp and stand at the low rail of the overpass, French-inhaling menthols in the dark as traffic whipped past below, taillights shooting west into the future. Toledo was three hours away, on the far side of Cleveland, far enough to be another country. Trucks lit like spaceships shuddered under her feet, dragging their own hot wind, their trailers full of unknown cargo. Slowly, night by night, the dream of leaving was coming true—with her family’s blessing, their very highest hopes. She could not regret it. She could only be grateful.

Inside, the a/c was cranked so high she wore a T-shirt under her uniform. They poached old nametags they found in the junk drawer under the register. She was Angie, Nina was Sam. They spun on their stools and watched the monitors, punching in the pump numbers and making change. They read heavy, insane fashion magazines and called around to see what was going on later—even though they were on camera too—and fought over whose turn it was to refill the nacho pot. Her timecard was in its slot, the clock beside it chunking with every minute, a record of her steadiness. She’d worked seven days a week since graduation and hadn’t missed a shift. Later the police would call this strict pattern a contributing factor. Secretly she was proud of it. She’d never been so determined. She’d never had a reason before.

The Conoco was an oasis of light, drawing cars off the highway like the muffleheads that fluttered against the windows. Drivers came in squinting and rubbing their necks, stopping on the mat inside the door as if this was all new to them, and too much, the bright aisles of candies and chips overloading their brains so they couldn’t read the sign directly in front of them.

They blinked at her, apologetic. “Where are the—?”

Fifty, a hundred times a night. She pointed her whole arm like a ghost.

The living dead had bad breath. They bought coffee and soda and water, cigarettes and gum, Tootsie Pops and jerky, anything to get them to the next stop. In line they nodded their heads and mouthed the lyrics to the dinosaur pop that played endlessly inside and out, a fiendish commercial-free satellite feed pieced together, it seemed, by U2 and the Doobie Brothers. They paid double what they would at the Giant Eagle and were grateful when she took a penny from the little dish to cover them.

“Thanks a lot, Angie,” Nina mocked, acting retarded, nuzzling her and flicking her tongue near her ear.

“He wanted to pet you and hug you and love you.”

The creepiest were the old guys who bought condoms and wanted to joke about it like they were on the same team. There was a regular from down the county Nina christened Fat Joe-Bob who must have weighed three hundred pounds and wore a chunky gold chain and the same black Steeler sweatpants year-round.

“I don’t think he actually uses them,” Nina said. “You know, the normal way?”

“Ow, my eyes!” Nina said, covering them. “I’m not supposed to get fatfuck in them.”

Their customers weren’t all strangers. Friends and classmates visited, sliding their fake IDs across the counter for them to inspect. Nina thought it was funny that Kim felt guilty, since they both had their own. For Kim it wasn’t the fear of getting busted so much as the feeling she was being taken advantage of, but hours later, when they caught up with their friends again, she drank her fair share of beers and was thankful she didn’t have to pay for them.

Every night they fought a war against boredom and lost. She thought their bodies should have adapted to swing shift after a whole month. Nina thought it had something to do with the fluorescents, the flat, shadowless wash of light that brought out the veins in their hands, their palms splotchy as raw hamburger. It was like living under water, two captured mermaids displayed in a tank.

And then, with half an hour left, they rallied, as if, the day nearly done, they were just now waking up. They wiped down the counters by the Icee machine and the microwave and restocked the coffee station, getting the place ready to hand over to Doug-o and Kevin. Whose turn was it to do the men’s room?

From there it was like a countdown. They took turns fixing their makeup and brushing their hair in the dinged steel mirror of the women’s room while the other manned the front. When graveyard punched in they hung up their tops—“’night, Angie” “’night, Sam”—then headed for their getaway cars, parked side by side.

Everyone’s schedule was different. In town Elise had already tipped out at Pape’s while J.P. was helping close the Giant Eagle. Hinch and Marnie still had another hour to go at the DQ, so they met there. It was convenient. They could leave their cars in the lot, backed up against the cemetery. The sheriff lived right across the road; no one would bother them.

High-Wired by Andrea Frazer
Prince William by Penny Junor
Cast An Evil Eye by Ruthe Ogilvie
Alpha Bear by Bianca D'Arc
Beauty from Pain by Georgia Cates
False Friends by Stephen Leather
My Life as a White Trash Zombie by Diana Rowland
West by Keyholder
A wasteland of strangers by Pronzini, Bill
The Spirit of Revenge by Bryan Gifford