Read Songs of the Shenandoah Online

Songs of the Shenandoah

Michael Reynolds'
Songs of the Shenandoah
is destined to become a classic. Third in a series of brilliant historical novels, the last is by no means the least. From the coast of Newfoundland through Manhattan and onto the battlefields of the Civil War and beyond, Reynolds has penned a sweeping epic that will leave the reader breathless. Do not miss this masterpiece!

Kathleen Y'Barbo, best-selling author of
Flora's Wish
and
Millie's Treasure
from the Secret Lives of Will Tucker series

Reynolds winds up his series of novels with one of his best works of fiction and some of his finest writing. By turns romantic, dramatic, suspenseful, and colorful, as well as being rich with powerful prose and dialogue,
Songs of the Shenandoah
is a sweeping conclusion to his Heirs of Ireland trilogy. It will be one of your best reads of the year.

Murray Pura, best-selling author of
The Wings of Morning
and
Ashton Park

Michael K. Reynoldsâwhat a find! I started reading his debut novel
Flight of the Earls
and couldn't put it down. A gripping family series set during a fascinating time in Irish-American history.

Michael Reynolds has given us a stunning debut novelâa saga that will capture both your heart and your mind as you journey back in time to experience triumph in the midst of crushingâexcept for Christâcircumstances. A soaring chronicle of immigrant America and beleaguered Ireland that will keep you reading late into the night.

From the Irish potato famine to the seedy streets of New York, Michael K. Reynolds takes the reader on a moving adventure. The writing sings, the story thrills, the characters are unapologetically realistic, and the message of hope and trust shines even in the grit. A novel not to be missed!

Sarah Sundin, award-winning author of
With Every Letter

Michael Reynolds's debut novel
Flight of the Earls
, hauls you into an Irish family at the beginning of the potato famine. Sending their grown children to America might save them all. Clare lands in New York City to find another kind of famine, lack of morals, all encompassed by greed and corruption. Clare's dogged fight to keep her family alive amidst overwhelming odds makes her a standout heroine. I heartily recommend
Flight of the Earls
and look forward to the next. Michael Reynolds is an author to look out for.

âLauraine Snelling, author of the continuing family saga of the Bjorklunds, the Blessing books, as readers call them, and the new Wild West Wind series with
Whispers on the Wind
and coming,
A Place to Belong

My ancestors on my grandfather's side immigrated from Ireland during the great potato famine. It's something I knew but didn't really understand until reading
Flight of the Earls
by Michael K. Reynolds. The questions, fears, and hopes of a generation come to life through this novel. I found my emotions wrapped up in the middle of it . . . a sign of good fiction! 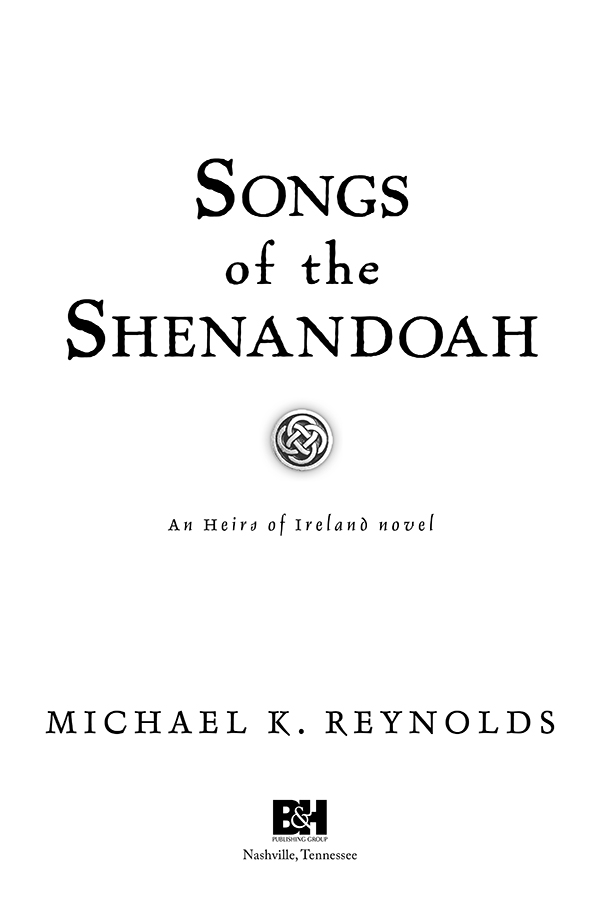 Songs of the Shenandoah, Digital Edition

Based on Print Edition

Publisher's Note: The characters and events in this book are fictional, and any resemblance to actual persons or events is coincidental.

who contributed immeasurably
to every word in this book.

You bring sweet melody to my life,
a song which never ceases to inspire.

As I compose these last words concluding the
Heirs of Ireland
series, I realize countless are those who have assisted me in the joyful labors of bringing these characters and stories to life.

My eternal gratitude goes to Jesus Christ who brings all inspiration and purpose to my writing.

And then there is my beloved wife Debbie, the lead character in my life, who has sacrificed greatly in the writing of these novels, and served as my faithful companion throughout this wild publishing journey. My daughters Kaleigh, Mackenzie, and Adeline have been such a blessing as they've tolerated with grace and understanding my many long nights and weekends in the office as my deadlines approach.

For Sheila, my mother and number one fan, who provided precious feedback and unyielding support. Also, for my father Philip who encouraged his son tremendously as did my sisters Cathy and Jacqueline and my good friend Larry Smith.

I am blessed with the world's classiest and most capable literary agent in Janet Kobobel Grant of Books & Such Literary Agency, whose patience and mentoring has helped craft my career.

My hat goes off to all of my friends at the Books & Such Literary Agency, and my many author friends as well, who promoted my writing and lifted my spirits during challenging times. And to the folks at the Mount Hermon Christian Writers Conference, who have positively impacted the careers and souls of many authors.

Blessings as well to my “inner circle” of Allen Batts, Jim Johnson and Greg Latimer, godly men who keep me grounded in my faith through deep valleys and the highest peaks.

For Julie Gwinn, who gave this writer his first publishing opportunity, and made the dreams of this trilogy come to fruition. And to the rest of the gifted team at B&H Publishing Group including Jennifer Lyell who carried the torch forward, my talented cover artist Diana Lawrence, book designer Kim Stanford, and marketing assistant Patrick Bonner.

Special thanks to my editor, Julee Schwarzburg, who has such a unique talent at bringing out the best in a writer. Not only is she a genius at what she does, but she is a pleasure to work with as well.

And for my Author Insiders and friends on Facebook and Twitter who are so willing to share news about my novels around the world. What you do makes a huge difference.

Thanks as well go out to my staff at Global Studio, who put their heart and talents to work in publicizing the author and his books.

All historical fiction novelists rely heavily on the painstaking efforts of scholars. There were so many excellent resources I depended on for the research of this book, chief among them being:
Gotham
by Edwin G. Burrows and Mike Wallace,
A Thread Across the Ocean: The Heroic Story of the Transatlantic Cable
by John Steele Gordon,
The Library of Congress Illustrated Timeline of the Civil War
by Margaret E. Wagner,
The Untold Civil War: Exploring the Human Side of War
by James Robertson,
Battle Cry of Freedom: The Civil War Era
by James McPherson and
The Civil War
series of documentaries by Ken Burns.

Finally . . . I have tremendous gratitude for my readers, who honor me with the gift of their time and imagination. And especially those who make the effort to thrill me with heartwarming reviews, kindly worded letters and who share me with their friends.

The mahogany clock inside the telegraph station ticked brightly in contrast to the unnerving silence in the room, and Clare Royce caught herself similarly tapping the tip of her pencil on her open notebook.

As the storied reporter for her husband's paper, the
New York Daily
, she was rarely far from her pad of paper, and for some reason not clearly understood to her, this story was personal to Clare.

Clare regretted not being here eleven days earlier when Cyrus Field, the mastermind of this wild-eyed venture, first arrived with the telegraph wire in tow aboard the great ship
Niagara
. Upon arriving in the early morn, he rode a dinghy to this remote landing in Newfoundland, a place of fog-enshrouded shores of blue waters and seemingly endless woodlands. He announced with glee, “The cable is laid” to all who would listen, thus signaling the beginning of a historic conversation between two continents: the elegant lady of Europe and the nubile beauty of North America.

Upon hearing this news, Clare came as quick as she could from New York, wanting to be at this location when Queen Victoria of England sent the line's first official message to President Buchanan of the United States.

As Clare sat here waiting, her thoughts drifted along the thousands of miles of cable laid across the murky floor of the Atlantic Ocean, which when it descended to depths below no doubt provided a curious distraction to the finned, shelled, and clawed inhabitants of the sea before it reached the bottom, there to rest among waving algae, jagged coral, and soft mud.

What completed Clare's fascination of this glorious line of one man's lofty imagination was its destination, an island off of the westernmost point of Ireland, a nation which had never escaped the most cherished places of Clare's heart.

It was there, in the green-grassed coastal village of Valencia, where the other end of the telegraph wire was connected, laid by the crew of the ship
Agamemnon
. Several weeks earlier, this British vessel had started midway in the Atlantic alongside the American-owned
Niagara
, and after splicing the cable between them, the two ships lay their thread like two spiders heading toward opposite worlds.

Clare imagined the sailors of the
Agamemnon
, with saltwater-drenched pants, carrying the cable through the frothy waves to the sandy beach, then looking up to the craggy rock cliffs of the Irish island. Clare wished she could have been there alongside them to gaze upon the lush hills dotted with stony hovels and foraging sheep and cattle.

Had it truly been more than a decade since she had carried her brothers and sister away from the death clench of the Emerald Isle's potato famine to the richer shores of America?

Oh how the sons and daughters of Ireland floated away like tragic driftwood from that land! Pushed by uncaring tides to distant lands, where there they were plucked from the waters with hands of mockery and scorn.

Still, as forgiving as her people were to the indignities they faced, Clare knew the sailors of the
Agamemnon
would be welcomed ashore with grace and ebullience. She could almost see the orange and yellow hues of the rising morning, and the entire populace of fishermen and farmers out early to cheer, assist, and experience the arrival of the mighty ship and its remarkable cargo.

She looked over toward the telegrapher's oaken desk, who with his balding pate and narrow frame seemed too frail for an assignment of such significance. Hovering around him, in between nervous pacing, was Mr. Field.

Cyrus had a stern disposition that belied his kindly nature, and he wore a short, scraggly beard that sprung out from beneath his chin. His intense eyes were monitoring every detail of the process.

Clare had never met a more fanatically dedicated man in her life, and she saw him as both a heroic and tragic figure in his tireless and failure-weary endeavor to connect the Old World and the new with his cable.

And she identified with Mr. Field's fall from financial graces. For just as his paper empire had collapsed as a result of the great banking crash of '57, the
Daily
and the Royces' place among the wealthy had fallen as precipitously.

Forbidden Fire (Forbidden #2) by Kinrade, Kimberly
Dancing in the Dark by Sandra Marton
Trial by Desire by Courtney Milan
The Intimidators by Donald Hamilton
Dancing in the Dark by David Donnell
Birth of Our Power by Greeman, Richard, Serge, Victor
The Ark Plan by Laura Martin
Love & Redemption by Chantel Rhondeau
Jasper Mountain by Kathy Steffen
Ghost in the Cowl by Moeller, Jonathan