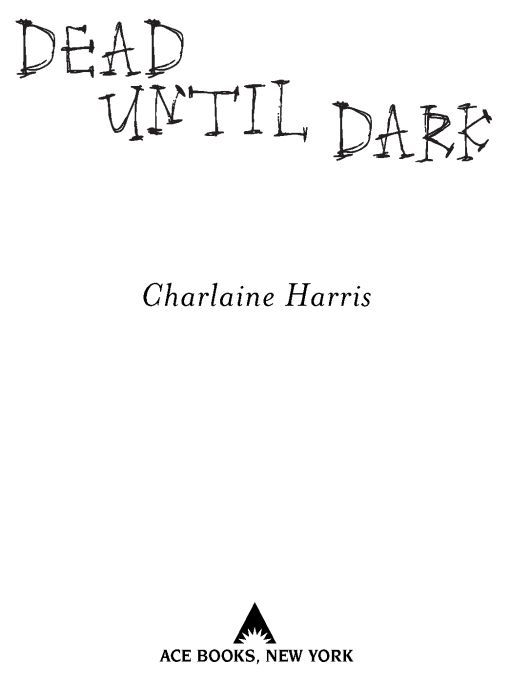 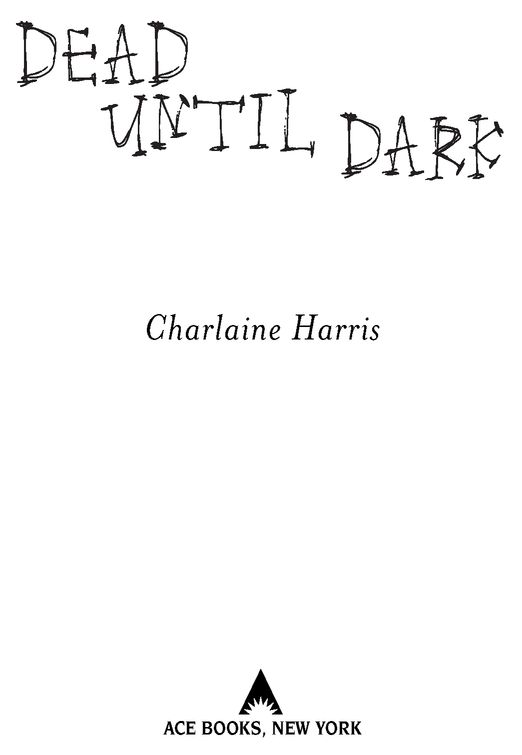 This is a work of fiction. Names, characters, places, and incidents are either the product of the author’s imagination or are used fictitiously, and any resemblance to actual persons, living or dead, business establishments, events or locales is entirely coincidental.
DEAD UNTIL DARK
An Ace Book / published by arrangement with the author
All rights reserved.
Copyright © 2001 by Charlaine Harris Schulz
This book may not be reproduced in whole or part, by
mimeograph or any other means, without permission.
Making or distributing electronic copies of this book constitutes
copyright infringement and could subject the infringer to
criminal and civil liability.
For information address:
The Berkley Publishing Group, a division of Penguin Putnam Inc.,
375 Hudson Street, New York, New York 10014.
The Penguin Putnam Inc. World Wide Web site address is
http://www.penguinputnam.com
eISBN : 978-1-101-15217-1
ACE®
ACE Books first published by Berkley Publishing Group,
a member of Penguin Putnam Inc.,
375 Hudson Street, New York, New York 10014.
ACE and the “A” design are trademarks belonging to Penguin
Putnam Inc.

My thanks and appreciation go to the people
who thought this book
was a good idea—
Dean James, Toni L. P. Kelner
and
Gary and Susan Nowlin
DEAD UNTIL DARK
Chapter 1
I
’D BEEN WAITING for the vampire for years when he walked into the bar.
Ever since vampires came out of the coffin (as they laughingly put it) four years ago, I’d hoped one would come to Bon Temps. We had all the other minorities in our little town—why not the newest, the legally recognized undead? But rural northern Louisiana wasn’t too tempting to vampires, apparently; on the other hand, New Orleans was a real center for them—the whole Anne Rice thing, right?
It’s not that long a drive from Bon Temps to New Orleans, and everyone who came into the bar said that if you threw a rock on a street corner you’d hit one. Though you better not.
But I was waiting for my own vampire.
You can tell I don’t get out much. And it’s not because I’m not pretty. I am. I’m blond and blue-eyed and twenty-five, and my legs are strong and my bosom is substantial, and I have a waspy waistline. I look good in the warm-weather waitress outfit Sam picked for us: black shorts, white T, white socks, black Nikes.
But I have a disability. That’s how I try to think of it.
The bar patrons just say I’m crazy.
Either way, the result is that I almost never have a date. So little treats count a lot with me.
And he sat at one of my tables—the vampire.
I knew immediately what he was. It amazed me when no one else turned around to stare. They couldn’t tell! But to me, his skin had a little glow, and I just knew.
I could have danced with joy, and in fact I did do a little step right there by the bar. Sam Merlotte, my boss, looked up from the drink he was mixing and gave me a tiny smile. I grabbed my tray and pad and went over to the vampire’s table. I hoped that my lipstick was still even and my ponytail was still neat. I’m kind of tense, and I could feel my smile yanking the corners of my mouth up.
He seemed lost in thought, and I had a chance to give him a good once-over before he looked up. He was a little under six feet, I estimated. He had thick brown hair, combed straight back and brushing his collar, and his long sideburns seemed curiously old-fashioned. He was pale, of course; hey, he was dead, if you believed the old tales. The politically correct theory, the one the vamps themselves publicly backed, had it that this guy was the victim of a virus that left him apparently dead for a couple of days and thereafter allergic to sunlight, silver, and garlic. The details depended on which newspaper you read. They were all full of vampire stuff these days.
Anyway, his lips were lovely, sharply sculpted, and he had arched dark brows. His nose swooped down right out of that arch, like a prince’s in a Byzantine mosaic. When he finally looked up, I saw his eyes were even darker than his hair, and the whites were incredibly white.
“What can I get you?” I asked, happy almost beyond words.
He raised his eyebrows. “Do you have the bottled synthetic blood?” he asked.
“No, I’m so sorry! Sam’s got some on order. Should be in next week.”
“Then red wine, please,” he said, and his voice was cool and clear, like a stream over smooth stones. I laughed out loud. It was too perfect.
“Don’t mind, Sookie, mister, she’s crazy,” came a familiar voice from the booth against the wall. All my happiness deflated, though I could feel the smile still straining my lips. The vampire was staring at me, watching the life go out of my face.
“I’ll get your wine right away,” I said, and strode off, not even looking at Mack Rattray’s smug face. He was there almost every night, he and his wife Denise. I called them the Rat Couple. They’d done their best to make me miserable since they’d moved into the rent trailer at Four Tracks Corner. I had hoped that they’d blow out of Bon Temps as suddenly as they’d blown in.
When they’d first come into Merlotte’s, I’d very rudely listened in to their thoughts—I know, pretty low-class of me. But I get bored like everyone else, and though I spend most of my time blocking out the thoughts of other people that try to pass through my brain, sometimes I just give in. So I knew some things about the Rattrays that maybe no one else did. For one thing, I knew they’d been in jail, though I didn’t know why. For another, I’d read the nasty thoughts Mack Rattray had entertained about yours truly. And then I’d heard in Denise’s thoughts that she’d abandoned a baby she’d had two years before, a baby that wasn’t Mack’s.
And they didn’t tip, either.
Sam poured a glass of the house red wine, looking over at the vampire’s table as he put it on my tray.

Give Us This Day by Delderfield, R.F.
Cycler by Lauren McLaughlin
Curse of the Egyptian Goddess by Rayns, Lisa
All Enemies Foreign and Domestic (Kelly Blake series) by Smith, Rodney
Murder with Fried Chicken and Waffles (Mahalia Watkins Soul Food Mystery) by Herbert, A.L.
Rock the City: A Midnight Fate Novel by Gia Riley
Losing Lila by Sarah Alderson
Something Like This (Secrets) by Eileen Cruz Coleman
Wife Wanted in Dry Creek by Janet Tronstad
Belisarius: The Last Roman General by Hughes, Ian