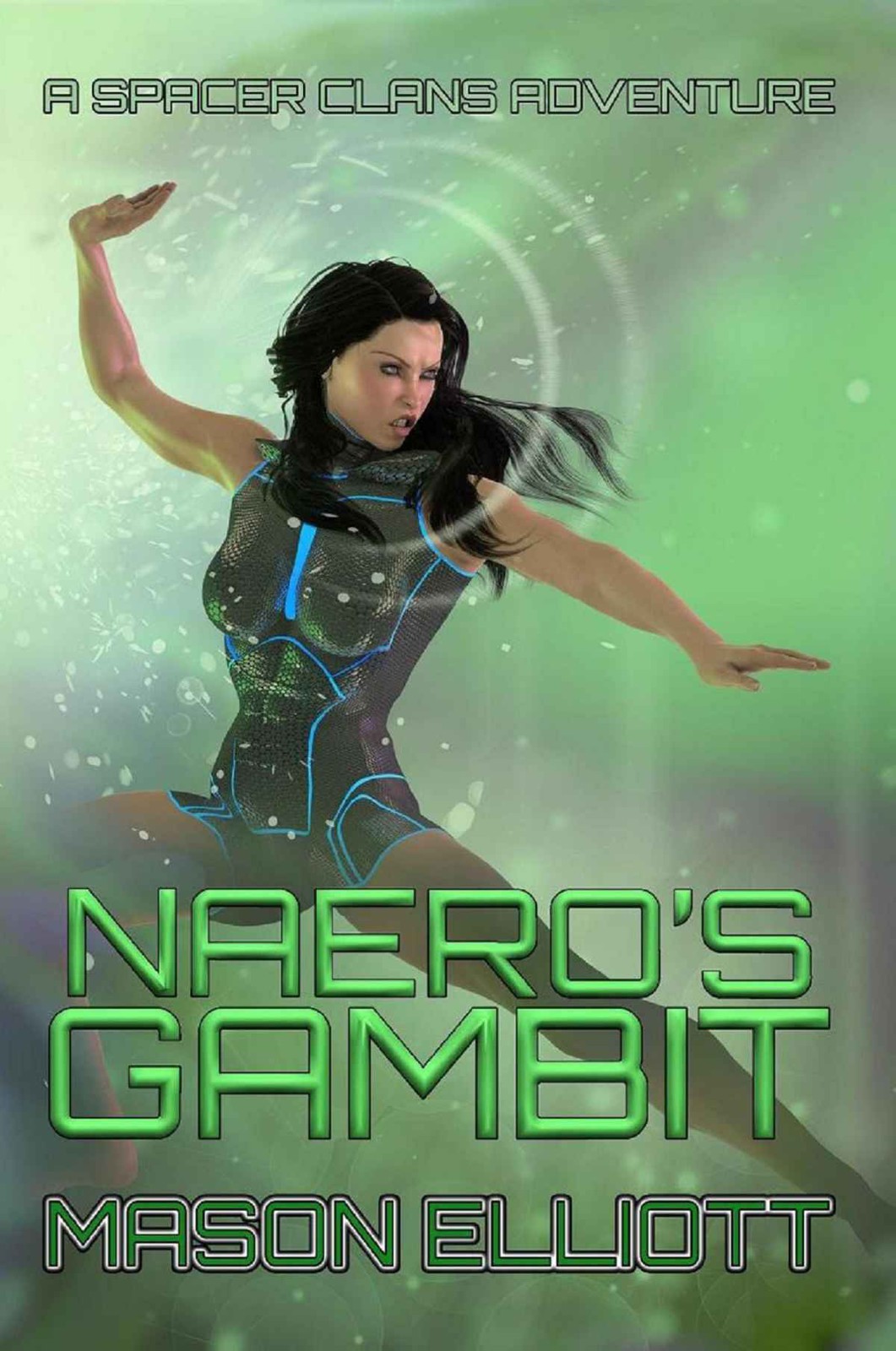 Watch for other titles by this author in the future.

This book or ebook is licensed for your personal enjoyment only. This work in any forma
t may not be re-sold or given away to other people. If you would like to share this book with another person, please purchase an additional copy for each person. If you’re reading this book and did not purchase it, or it was not purchased for your use only, then please purchase your own copy. Thank you for respecting the hard work of this author.

Life gave people chances. That was all.

It was up to everyone
to make of those chances what they would, for good or ill.

Captain Naero Amashin Maeris
’ new trade fleet raced at top speed to make the Clan wedding at the Keltin-5 Star base. On the border with The Alliance and the other remaining Gigacorps.

Aunt Sleak and Zalvano already functioned
pretty much as partners in every other way that counted. But their marriage remained more than a formality. The latest war with the Corps and Zalvano almost dying changed Naero’s aunt in many ways for the better. Forcing her to take time to cherish what was often all-too fleeting.

Life only gave people so much time, and so many chances.
Naero thought of her parents and her best friend Gallan, understanding that fact all too well.

Marriages
among Spacers were always a sign of hope for the future, that love and courage could endure and triumph over Chaos and Destruction.

Even
if only for a little while.

She sat up
again in her luxurious but relatively small programmable nanobed and rubbed her eyes. The holographic zilken sheets sensed her rising and glowed slightly to afford her more ambient light.

The nanowalls sensed her movements and also slowly brought up the room lights, like dawn pulsing on a horizon.

In the dim light, she hugged her knees up close to her and looked out. Her long black hair caped around her small, athletic form.

Much like her life, Naero kept her captain
’s quarters on her small flagship efficient, Spartan, and in good order. With slight touches of luxury and extravagance here and there–like her oval, pop-up nanobed.

At times she didn
’t even pweak it up and simply snuggled in on the soft nanofloor, form-fitting itself around her.

On those standard nights s
he felt like a tiny white jewel nestled in a huge black velvet box.

Her thematic oval quarters around her measured only five by ten meters.
Small by the standards of most merchant fleet captains.

Nanowalls
, floors, and ceiling only five meters high. When she rose they were set to gradually hue to bright ivory. When she tried to sleep, they dialed down to flat onyx starless sky.

Hidden compartments. A few expensive furnishings and several high tek arrays. A mix of cheap and pricey art that she liked. Mostly paintings or holos.
A few trendy statues and figurines.

Like the one of the scantily-clad, knife-fighting girl in gold-and-silver-veined
, black Telurian marble from Telur-6. All wild-haired with long, wicked blades poised to do battle. A fierce, concentrated look of ferocity in her eyes and face.

It reminded Naero too much of herself. S
o naturally she had to have it, and haggled a good price for the damn thing.

A
nother prize: a compact, antique wooden meeting table and chairs–Spican walnut–held secure by the nanofloor until someone came near to use them.

Several brushes and hair clasps and adornments that had once been her beautiful mother’s, arranged in a gilded case like the works of art they were. Along with a favorite holo of her mom that always made her weep if she studied it too long.

One of her enormous father
’s Galactic Championship belts. Books of his poetry and writings. Another favorite holo of him with little versions of her and Jan in his proud, gigantic arms. Them grinning like happy little dolls.

She could not look at that one for very long either.

A set of
expensive, razor-sharp fighting knives Gallan had given her as a gift. With a small pic she added of him giving her two thumbs up. One she touched each day with her fingertips and whispered.

She still mourned their losses deeply.

Each day she missed them in her life.

She kept going forward. They remained stolen from her at some point frozen in her past.

Naero did her best to cherish those family and friends who remained.

When Aunt Sleak confided that she was also now pregnant with twin-girls, Naero
did two things.

First she nearly
fainted. If it were even possible for Spacers to faint.

Then she burst out laughing.

She still swallowed hard and just couldn’t force her mind to imagine hard-headed Aunt Sleak with two babies to wrangle.

Naero didn
’t know who she felt more sorry for: Aunt Sleak, or her future girl-cousins.

Naero avoided dwelling on the fates of her own lost brothers
too much. Until she could do something about that situation, there wasn’t much point.

Crazed Danner
, now an outcast, a prisoner, along with poor Janner. Somewhere in the hands of the enemy. Even Baeven, their incredibly resourceful outcast-uncle hadn’t been able to find them yet.

Thus, f
or the time being, Jan remained lost to her as well.

T
hat knowledge and the guilt that went with it tortured her each day for the past year and a half.

How could she rescue Jan if she
couldn’t find him?

On board her small flagship,
The Flying Dagger,
Naero attempted to grab some rest each night at the end of a long standard day.

But
this night, like others, she snapped awake at three bells with another ominous headache, after only a few hours more of her increasingly confused and troubled sleep and dreams.

She
tried to parse out what was wrong.

Her
strange, dangerous powers were still gone. Om remained out of touch inside her mind. Neither had re-surfaced for well over an entire standard year.

So why did
the crazy dreams and headaches start up again?

She grasped the side of her head with both hands as if pressing in on her skull could relieve the
intense pressure.

It felt as if several fleets were having a roaring battle in her brain
, trying to blast their way out. She doubled over and rolled onto the floor of her quarters, groaning and grimacing at the sheer agony. Her long dark shining black hair waterfalled and slipped down around her nude, geisha-ivory flesh.

Usually she could never bear to sleep in any c
lothing when given her choice–not even her favorite black Nytex flight togs, which she wore everywhere, almost religiously.

Her close
st friends and crew thought it hilarious to buy her pajamas, various styles of sleepwear, some of it even quite slinky. They did so as gag gifts, knowing full well she’d never even consider donning most of them.

Most of them did their best to get used to her calling them at all hours and bells of the standard day and night, usually forgetting her holo was turned on. She’d wake them up or interrupt them beside their lovers about some urgent matter, heedless of what they were doing, or what she was-or-was-not wearing.

Naero would
just blurt out whatever she needed to tell them and sign off the very next instant.

Her eyes popped wide. Naero lowered her head to the coolness of her nanofloor, gasping for air.

She considered calling up Zhen, waking her and Tyber again.

But her ship’s doctor had no answers for her.

All they could be sure of was that whatever transpired in her head for the past
year or more slowly grew worse.

Too many drugs
made her loopy.

In the end,
Naero chose to deal with the pain, but that became increasingly more difficult. And she had so much to do.

She took her hand off her com button. Let Zee and Tye sleep, breathing peaceful
ly, locked in each others’ arms. She’d startled them awake too many times as it was.

Her friends planned on getting married in a year or two. A logical conclusion. They were so perfect and happy together, everyone just assumed they’d get around to it–with kids and the rest to follow. As certain as the stars continued to wheel and shine each day.

As their captain, Naero would
even preside over their ceremony.

Aunt Sleak had been so right, about so m
any things.

Be
coming a ship, and then a merchant fleet captain had given her many new perspectives managing the lives and aspirations of others. On being responsible for the safety and happiness of her people as a whole.

A rod of
white-hot agony impaled her head between her temples.

Naero screamed and rubbed them
, doubling over. Whimpering softly.

She had to do something.
Contact Baeven–if she could reach him. Perhaps the Spacer Mystics. She needed to get help somewhere, before she could no longer pretend to keep functioning on an even keel.

Her performance or lack thereof would affect everyone, and their new fleet
, just when things were going so well.

She could
not allow that.

So much to stay on top of. No wonder her head was killing her.
But some of the solutions eluded her, no matter how hard she racked her mind.

Could it be
Om up in there causing these attacks? The Kexxian Data Matrix Defense Protocol–an ancient, alien AI trapped in her skull, still linked to her mind and personality.

Om would never hurt her on purpose; at least not without a good reason.
In the horrific battle with her insane, former-brother Danner, Om had clearly sacrificed himself to save her.

Yet
she sensed Om still inside her mind somehow, constantly striving, searching for a way to re-form his awareness and communicate with her again. If that would ever be possible.

H
ard to say just what caused her mind attacks. She had suffered such attacks before, and not even Zhen could say what damage being shot through the back of the head with a mind control sliver had done to her.

Even her dreams, nightmares, and visions were d
ifferent since then. Just as terrifying, but more jumbled, mixed-up, and fragmented. They came to her in confusing snatches, even out of context and time sequence.

Naero didn
’t have time for any of this crap. She couldn’t let her people down.

She had formulated
her trade alliance between some of the other brash, headstrong young captains from all forty-nine Clans.

Their trade fleet and the huge profits they all racked up after the
Annexation War during the Boom allowed Naero to pay off
The Dagger
in three months, not three years. And then buy two more ships to refit with her fixers:
The Ajax
and
The Dragon’s Teeth
.

But coordinating the ventures and needs of over
sixty Spacer Captains and their ships was worse than herding cats. Even she was hard-pressed to keep them functioning at optimal levels.

Only the massive demands and needs of the many annexed and rebuilding worlds among the victorious allies allowed their venture to expand and thrive
beyond belief.

The
explosive growth among Joshua Tech, The Mining Worlds, and the new Matayan Republic was just that–unprecedented.

Everyone cashed
in on the feeding frenzy.

She
absently checked and pweaked the trade flows while her throbbing pain attack finally subsided.

That
effort left her sweaty and exhausted.

Maybe now she could lie down and
finally rest before Aunt Sleak and Zalvano’s wedding, later that day.

What was bothering her so much?

Then she started suddenly with a flash of insight.

She
’d felt this way before.

Somet
hing was trying to warn her.