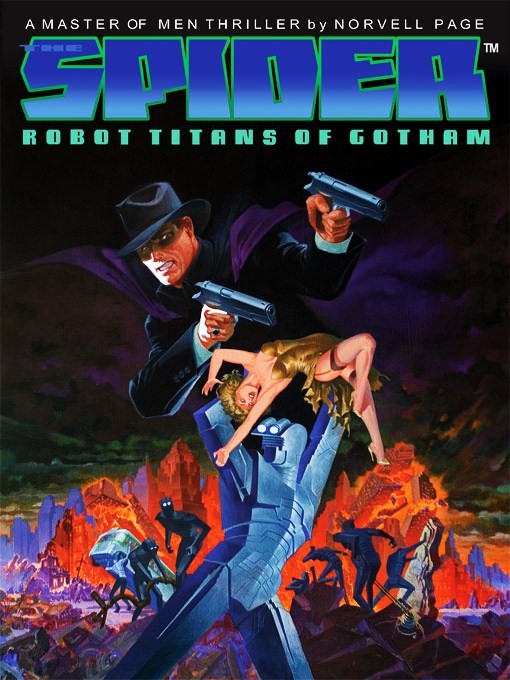 All Rights Reserved. A Baen Book Baen Publishing Enterprises
THE SPIDER: ROBOT TITANS OF GOTHAM
This is a work of fiction. All the characters and events portrayed in this book are fictional, and any resemblance to real people or incidents is purely coincidental. TM and copyright © 2007 Argosy Communications, Inc.
Baen Publishing
P.O. Box 1403
Riverdale, NY 10471
www.baen.com
ISBN 10: 1-4165-2127-5
ISBN 13: 978-1-4165-2127-3
Cover and interior art by Jim Steranko
Special thanks to consulting art director J. David Spurlock and Vanguard Productions
First Baen printing, June 2007
Distributed by Simon & Schuster
1230 Avenue of the Americas
New York, NY 10020
Library of Congress Cataloging-in-Publication Data: t/k
Printed in the United States of America

DEATH REIGN OF THE VAMPIRE KING
originally appeared in
the November 1935 issue of
THE SPIDER
magazine.
Copyright 1935 by Popular Publications, Inc. Copyright renewed
1963 and assigned to Argosy Communications, Inc.
All Rights Reserved.

THE CITY CONDEMNED TO HELL
originally appeared in the
issue of February-March 1939 issue of
THE OCTOPUS
magazine.
Copyright 1938 by Popular Publications, Inc. Copyright renewed
1966 and assigned to Argosy Communications, Inc.
All Rights Reserved.

THE SPIDER™
is a trademark of Argosy Communications, Inc.

DARK, OVERCAST SKIES OUTSIDE, and diffuse lighting inside, contributed to the gray feeling that made Norvell W. Page withdraw into himself, that day in January 1941. He was lost in thought as he proceeded through the main reading hall at The New York Public Library on Fifth and 42nd.

While exiting the card file room through the large doorway leading out into the hallway, he was so preoccupied that he was absentmindedly brushing past those entering.

Having finished his research on the new mini-submarines that were constructed for the Japanese Navy, he was reminded of some of the past subjects that he had spent time researching for The Spider.

The Spider demanded cutting edge action, and Page had to do the research. The Spider was his bread and butter.

He had spend hours in the engineering stacks just to perfect the concept, right down to how the control panel operated.

Page enjoyed sharing his ideas. He even borrowed an idea from "The Green Madness" story that his editor, Loring Dowst, had written and had suggested that Page use for "Slaves of the Laughing Death," which, in turn, Page's close friend, Theodore Tinsley, had borrowed for The Shadow entry, "The Green Terror."

However, now, there was a new element that was unsettling to Page. It was barely perceptible when he had sensed it back in 1939, but, by 1940, it became a major problem that could not be mistaken for anything else.

Page retrieved his things from the library coat room mechanically and, as he walked out of the 42nd Street exit, the chilled fresh air snapped him back into awareness, and he hurried down the steps to the sidewalk.

Page walked briskly across Fifth Avenue, keeping to the south side of 42nd Street, with the wind whipping at him and the cold stinging his eyes.

Walking eastward on 42nd, Page clutched a large manila envelope to the breast of his dark blue overcoat with his left hand and held his black fedora firmly on his head with his right. Nearing the Lincoln Building, he caught sight of a man with a saturnine expression striding towards him. His former literary agent.

"Norvell!" Lurton Blassingame called out as he approached. "What a coincidence, someone was just asking for you."

"Hi, Lurton," Page said dourly. "Let's talk inside. It's rather windy out here."

Page hoped that this was not a ploy to get him back to the agency. He liked Lurton, but his output did not require an agent.

Inside, near the miniature of the famed Lincoln Memorial statue that's set on a pedestal centered in the Lincoln Building lobby, they spoke.

"Norvell, someone—probably an 'acquaintance' from your days as a newspaper reporter—came by this morning and wanted to get in touch with you. I told him you were no longer represented by my agency, but could be reached at the offices of Popular Publications. He had a raspy voice."

When the elevator stopped at the 25th floor, Page got off and entered the maze of corridors, which the Lincoln Building sported, and trusted to memory and instinct locating the offices of Swiger, King and Chambers.

Upon setting foot in the reception area, a secretary looked up from her typing and greeted him.

"Good afternoon, Mr. Page. Mr. Harragan is expecting you and will be with you shortly. I'll take you to the conference room, where he will meet with you."

Inside the conference room, which also served as a law library, Page made himself comfortable. He put his hat and overcoat on a chair in a corner. Then, he placed the manila envelope underneath the overcoat.

Page inspected his surroundings and was fascinated with the framed prints of old maps that were hung on the walls.

While he was closely examining the "Ukrainia" map, a man dressed in a dark suit, and looking like a benign Jack Dempsey, entered.

"Hello, Norvell," Edwin J. Harragan said warmly with a slightly drawl, as he reached out to shake hands. "Glad you could make it."

"This is one meeting I wouldn't miss for the world."

"Norvell, thanks to your diligent efforts," Ed Harragan began saying as they sat down, "a settlement has finally been reached. However, there is one key provision: silence."

Smiling, Page looked at Ed Harragan and asked wryly, "They don't want Superman to be known as 'The Man of Steal'?"

"Under the circumstances, since a settlement was reached, think in terms that it was 'borrowed'."

"I could, if they had acknowledged that the storyline of 'Bandit Robots of Metropolis' was based on The Spider novel that I wrote!"

"I happen to agree with you—it's all highly irregular and not the way that I would have addressed the matter—but it was completely done verbally by Harold Goldsmith of Popular Publications, with Jack Liebowitz of Detective Comics, and not me. They had known each other since 1932, when they met at the creditors meeting for the Eastern News bankruptcy." Reaching over to a bookshelf close by, Harragan extracted a plain business-size envelope that was secreted between two legal volumes and handed it to Page.

"What's this?" Page asked incredulously, taking the envelope, then lifted up its unsealed flap to peer inside.

Page counted eighteen hundred-dollar bills. Then he whistled when it struck him that he had originally received only $550 for the novel that was "borrowed" for Superman.

Norvell Page enjoyed his visits to his editor's office, located high above East 42nd Street. Popular Publications was now the undisputed leader, and he was among the cherished writers who had helped to make it a formidable pulp magazine empire. Here, he was treated with deference. Even though it was bustling with activity, Page could amble through the corridors of the suite unescorted, saying hello to old friends, viewing recent cover paintings displayed on the walls like at an art gallery, and quietly approach his editor's inner sanctum unobserved.

Halting right before the threshold, Page looked in to find his editor, Loring Dowst, meticulously at work, in his shirtsleeves, editing a manuscript with blue pencil in hand and a green visor shading his eyes.

When Loring placed the pencil down on the desk and began to neatly arrange the edited portion of the manuscript before him, Page took the large manila envelope from under his arm by one of its corners, and tossed it in to the top of the desk, ruffling loose sheets of paper and causing the blue pencil to roll off the desk and on to the floor.

"Thanks, Norvell!" Loring grunted, bending over to retrieve his pencil while still seated in the chair. "I knew you wouldn't let me down."

"Anything for a pal," Page said. "Once it hit me that The Spider should have a submachine gun in each hand—and both blazing away at the same time—everything fell into place. It was finished in no time!"

"You really know your stuff," Loring said, as he was eagerly opening the manila envelope. "But then, you are The Spider!"

"By the way, has a check been cut for my novel for the April issue?"

Hearing the very words that he was dreading to hear, Loring began to blush.

"Yes, Norvell. But, it's difficult to tell you this," Loring said sheepishly. "Due to prevailing economics, the check is only for $450—your new rate for The Spider."

"Yes, comics," Loring said, adding, "Eva Walker is holding the check for you, since Harry Steeger wants to see you."

"Mr. Steeger is at a meeting in the art director's office," Eva Walker said in her high-strung nervous way, "but he instructed me to take you directly to his office."

Page was alone, knowing that Eva Walker had a million other things to do, and Lucy, Harry's secretary, was on vacation.

Listening keenly, and hearing no sound in the immediate vicinity, he finally had the opportunity to discover the secret inside the mysterious four drawer legal-size green metal filing cabinet near Harry's desk.

He opened the top drawer, looked in, and closed it promptly.

Then, he opened the next drawer, looked in, and closed it promptly.

Then, again, he opened the next drawer, looked in, and closed that promptly.

Finally, crouching down, he got to the bottom drawer. He took a deep breath, opened the drawer wide, and looked in expectantly.

He was about to close the drawer, when he noticed something and picked it up to examine.

Page relished holding the faux pistol. It was a connection to his past, when his rate was $700 per novel, when there were no comics around.

He looked around the office and noticed a small bronze statue of a bull on the top shelf of a bookcase. "Perfect target!" he thought.

He placed the pistol model in the waistband on the left side of his pants, its butt facing forward under his suit jacket, hands at his sides, he looked squarely at the small bronze bull statue.

"It's a present from my mother," Page heard the voice of the head of Popular Publications say from behind him, and sheepishly turned around to face a man who looked like a young Lew Ayres. "She thought that spot needed something."

"Good to see you, too, Norvell! How's the project coming?"

"How about a sneak attack on New York Harbor?"

Using the 43rd Street exit, Norvell turned left and headed for Grand Central Station in the early evening darkness, putting his black fedora on his head and pulling his overcoat closed.

Just a few paces westward, someone emerged from a darkened spot on the side of a building and stood in his path, with their hands in the pockets of their overcoat.

Immediately noticing that the bulge from one of the pockets was the outline of a gun, Page drew out the mock pistol and aimed it squarely at the target in front of him.

The man with the gun in his pocket squinted at the pistol.

Just as he finished saying, "Are you kidding?" a bullet hole appeared in the center of his forehead. The man lurched back slightly, then pitched forward, crashing face down on the sidewalk, hands still in his pockets.

Three men came out of the darkness from in back of Page. One of them was holding a smoking gun, from which a silencer was being detached with a gloved hand.

Norvell looked at one of the three and smiled, "Hello, Frank."

The leader of the three was Frank Costello, his "off the record" contact during his newspaper reporting days, who said, in a raspy voice, "Page, just what the hell do you think you're doing with that?"