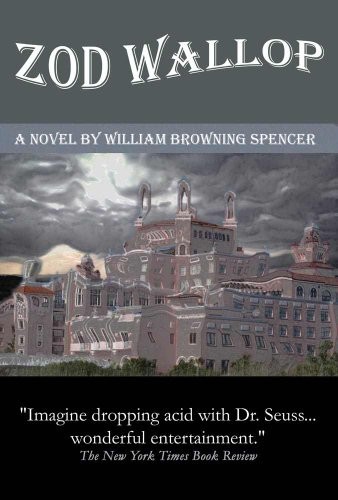 H
ARRY
G
AINESBOROUGH
, ex-writer of children’s books, just wants to be left alone. But the world—worlds, actually—won’t let him. Raymond Story, escaped from Harwood Psychiatric (and now married to Emily, a catatonic girl that Raymond declares is the Frozen Princess) has enlisted some of his fellow patients and is intent on saving the world—with Harry’s help.

Nonsense, of course. But a Ralewing (a nasty sort of flying sting ray that Harry invented for his book) appears to have eaten the paint from the roof of Harry’s car; the ruthless executive of a large pharmaceutical company bears an unsettling resemblance to
Zod Wallop’
s evil Lord Draining, and a hotel in Florida could be about to host the end of the world.

All rights reserved. This book may not be reproduced, in whole or in part, without the written permission of the author, William Browning Spencer.

“
Zod Wallop
is a delightful picaresque which along the way has some wise things to say about the responsibility of authorship, and the relative power of author and reader.” —
Interzone

“…starts off with the sort of bang that makes you tighten your seat belt. One of the strangest achievements in recent literature,
Zod Wallop
manages to pile absurdity on top of absurdity, passing from the ridiculous to the grotesque and eventually the horrific before soaring, incredibly, to the sublime, all the while violating many of those time-honored customs that enable us, readers and writers, to live together in harmony… Do you hear that ripping sound? Relax: it is not a wing tearing off; it is William Browning Spencer shredding all these rules and many, many others. And getting away with it… Fantastical as it is…it nonetheless is rooted firmly (like fairy tales themselves) in the common ground of human feelings, held together by the strong muscles of the heart… I’ve never read anything like this at all. For all its teetering wildness,
Zod Wallop
packs a pretty mean punch.” —
Washington
Post Book World

“By raising the question of who is crazy and who is sane, Spencer seduces the reader into considering the underlying question: What is craziness and what is sanity? Happily this very talented author has not only the irreverent humor but also the insight into the manic rhythms of madness to pull this query off.” —
Publishers Weekly (starred review)

“…a fine novel…a very kindly book, if somewhat stern, and I think it has a lot of helpful truth in it.”— Gahan Wilson,
Realms of Fantasy

“Spencer is a wonderful writer… Through one beguiling, horrifying, absurdist David-Lynchian episode after another, we follow Spencer’s cast as they strive to prevent one man’s intense self-pity and suffering from rendering our world a stony desert. Speaking deep truths about the uses and abuses of escapism and fantasy,
Zod Wallop
provides a wild ride through a land where sanity and insanity blur.” —
Asimov’s Science Fiction

“The old theme of fantasy versus reality gains new twists and poignancy in
Zod Wallop
… Funny, exciting, and sad,
Zod Wallop
should delight readers wise enough to know that one moment of despair can be worse than a dozen dragons.” —
Starlog

“Every so often a book comes along that deserves to be an instant classic, and this fourth book by William Spencer leaps immediately into that company. Or to put it another way, I got the same feeling reading
Zod Wallop
as I did when I first read Jonathan Carroll’s
The Land of Laughs
—a sense that here was something entirely original, a novel both serious and funny, beautifully written, a delight and a wonder, a true gift.”— Charles de Lint,
The Magazine of Fantasy and Science Fiction

“He’s sharp and funny and serious at the same time… Spencer’s is a fun-house ride. His characters start out crazy and (some of them at least) struggle toward sanity… Watch this writer. He’ll soon be one of your favorites.” —
Aboriginal SF

“A delightfully funny waltz through a literary house of mirrors, and it establishes Spencer as the heir to Vladimir Nabokov. This book is the most hopeful fruit of the literary tree with Nabokov at the root and Thomas Pynchon as a branch.”— Don Webb,
The Austin American-Statesman

“Wonderfully zany with sinister overtones,
Zod Wallop
could be the story of Robin Hood and his merry men on LSD.” —
Booklist

“Like all good fairy tales
Zod Wallop
is both scary and fun…a pleasantly grim confection suggestive of Seuss, Tolkien, and Poe.” —
Texas
Monthly

This book is dedicated to my
sister, Susan, all the
children lost and found, and the
writers of the books that chronicle
the journey.

T
HE
W
EDDING
W
AS
held outdoors. An April sky darkened and gusts of wind, like large, unruly hounds, knocked over folding chairs and made off with hats and handkerchiefs. A bright yellow hat went sailing over the lake, cheered on by two small children.

Ada Story said to her husband, “I told Raymond this was not the season for an outdoor wedding.”

Her husband, who was watching a black cloud race toward him as though it had singled him out and intended some mischief to his new summer suit, replied: “I don’t know how you’ve lived this long and missed it, Ada. Our Raymond isn’t interested in traveling the highway of our advice.” Their son did march to his own drum, particularly when he was refusing to take his medication.

Mrs. Story sniffed and lifted her face to the darkening heavens.
I hope they hold off
, she thought.

In case her own mind might misinterpret her thoughts, she added,
The rain clouds, I mean. I hope the rain holds off.

All the chairs were filled with the wedding guests now, and there was, really, something exciting in the prospect of so much finery exposed to the elements. The riskiness of life, of all human ventures, was underlined by the first large raindrops and the growl of approaching thunder. The minister’s robes billowed in the winds, and the coming storm seemed intent on editing him, first snatching one piece of paper, then another, and launching them into the air. Reverend Gates displayed considerable dexterity as he darted after his text, and the crowd burst into a flurry of applause when he executed a twisting leap and fetched a loose page that seemed already lost to the lake. No outfielder snagging a bleacher-bound fly ball could have displayed greater style, and since the crowd had no way of knowing that the retrieved paper contained a rather tedious rehash of St. Paul’s thoughts on duty, their enthusiasm was unrestrained.

The Reverend Gates, having regained command of his notes, was giving them the once-over through gold-rimmed spectacles, when a stirring of voices caused him to look up.

A fat man in a tuxedo, perilously perched on a bicycle and pedaling with frantic enterprise, had crested a green hill and was now racing toward the gathering. His speed was disconcerting, but what truly troubled the Reverend Gates was the man’s appearance. He had two heads.

In the next instant, Reverend Gates realized that he was looking at a man—now so close that his blue eyes and explosion of brown mustache identified him as the groom, Raymond Story—and a monkey. The monkey, a small, soot-black, frightened mammal, was clutching Raymond’s neck and chattering wildly in the time-honored tradition of a passenger attempting to exert some control over his destiny.

Raymond Story cycled down the aisle between the folding chairs and stopped. He dismounted, frowned, and approached Reverend Gates.

“I’ve brought a monkey,” Raymond said, in a matter-of-fact tone that the minister found comforting—for no good reason, really. Raymond looked around, turning in a slow circle, and said, “They can’t influence a monkey.”

The Reverend Gates had known Raymond since the day of Raymond’s birth. The reverend was not, therefore, as unsettled as a stranger might have been under similar circumstances.

“Your mother’s arranged a lovely ceremony,” Reverend Gates said. “All we seem to lack, indeed, is the…ah…bride.”
I’m not,
the reverend thought,
marrying you to any monkey
.

But the monkey was not Raymond’s intended. The monkey’s role was instantly revealed, as Raymond turned to the animal crouching on his shoulder and said, “Have you got the ring?”

The monkey, grinning as though savoring a bawdy joke, opened a long-fingered hand to reveal a large, ornately engraved ring.

The monkey promptly put the ring in its mouth.

A large white van rose up over the hill and bore down on the crowd. Reverend Gates felt his arm clutched tightly and Raymond’s voice boomed in his ear. “Allan has not failed me. We’ll want a short ceremony, Reverend.”

The van spun sideways and lurched to a stop, revealing a blue insignia and the words
HARWOOD
PSYCHIATRIC
emblazoned on its side. The vehicle rested placidly on the grass, and then it began to rock, the sliding door slid open, a ramp lowered to the ground, and someone in a wheelchair, flanked by a half dozen milling shapes, emerged.

“My Queen!” Raymond bellowed, causing the reverend to jump. The sky exploded; the world dimmed under sheets of gray, implacable rain. Umbrellas bloomed.

“Oh dear,” Ada said, as she huddled under her husband’s umbrella. “Wouldn’t you know it.”

She felt her husband’s arm encircle her waist and draw her closer. “It’s only weather,” he said.

Reverend Gates had ceased congratulating himself on his calm. His own umbrella had been wrenched from his hand by the brutish gale. One of the wedding guests offered him an umbrella.
I’m as wet as I am going to get
, Reverend Gates thought, and he dismissed the offer with a wave of his hand. His notes were a sodden lump. His white hair, generally a fine, regal mist, was plastered to his skull. He wondered if he looked as bad as the monkey, which had been transformed into a sort of gigantic sodden spider.

The reverend leaned forward, clutching his Bible, squinting through the deluge. Dim figures were coming down the aisle between the twin fields of umbrellas. A giant in a billowing raincoat emerged from the shadowy curtain of rain. He was pushing a wheelchair that contained a gray, hooded figure. A lovely girl, barefoot and wearing a white, one-piece bathing suit, walked beside the wheelchair, one hand casually resting on the occupant’s cloaked shoulder. She wore a white terry cloth headband into which bright yellow daisies had been tucked. The effect was oddly elegant. She smiled, pushed a strand of black hair from her cheek, and looked up at the minister who, disconcerted by the candor of her gaze, retreated into austerity, motioning them to move forward quickly.

Reverend Gates glanced at Raymond, whose round face was slick with rain. Raindrops danced on the young man’s rain-glued hair, creating a silver halo. His eyes seemed unusually blue and bright. God, Reverend Gates thought (and not for the first time), had hugged this boy too tightly.