Read Squishy Taylor and a Question of Trust Online

Squishy Taylor and a Question of Trust 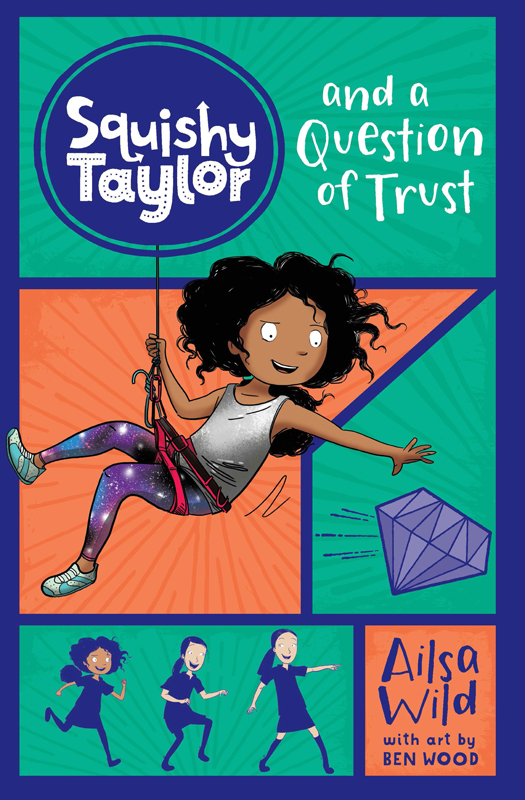 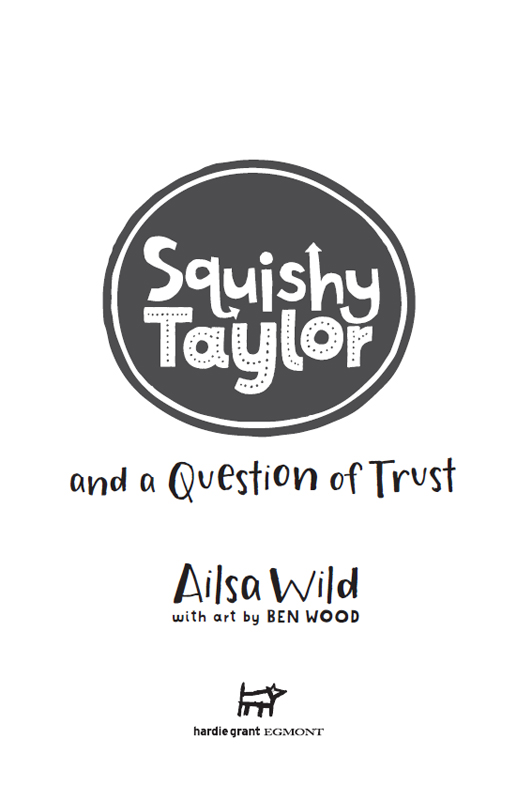 For Lily Rose and Niamh – you’ve been helping me think about stories since you were tiny.

For John. Thanks for trusting me.

About the author and illustrator 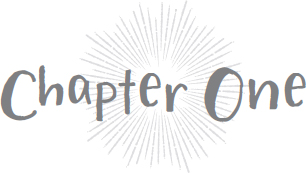 I’m lying on my tummy with my eye
jammed
against the telescope so I can see into the building opposite. The office straight across from our bedroom belongs to Boring Lady. She’s typing away as usual. Her face has no feelings on it.

But something is very wrong – she doesn’t usually work in the middle of the night.

‘What are you doing?’ Vee grumbles in the bunk above me. It squeaks as she rolls over and my eye shifts against the telescope. We have a triple bunk-bed and I’m in the middle. It’s awesome for
bunk-bed tricks
and the worst when you want to do night-time spying.

‘Our bonus sister is being crazy as usual,’ Jessie says from beneath me.

When I first moved in here, Dad said I should think of Jessie and Vee as a bonus. I thought he was just trying to make me feel better about moving in. But it turns out it’s true: the twins mostly
are
a bonus. So we never say ‘stepsister’ anymore. Bonus sisters forever.

‘But
Squishy
,’ Jessie says. Everyone calls me Squishy, even my teachers. I’m Squishy Taylor – like the gangster Squizzy Taylor, only better. ‘Squishy, it’s the middle of the night. Boring Lady isn’t working.’

Vee does her
Rolling-Spin-Drop
manoeuvre from the top bunk so she’s lying beside me.

The telescope is ginormous and sits on a tripod. It’s an old one from Alice, my bonus mum. Her university didn’t want it anymore, so she gave it to Jessie. Jessie checks the stars and her astronomy app every night. 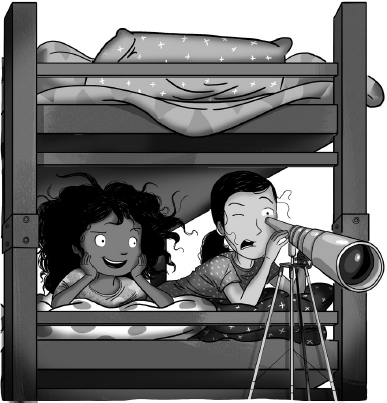 Vee has nudged me aside to look through the telescope. ‘No
way
!’ she says again, but this time she’s not saying it because she doesn’t believe me.

‘Guys!’ Jessie says. ‘Go back to sleep. It’s …’ I can hear her rolling over to check. ‘It’s two fifty-seven in the morning.’

Vee doesn’t move and her voice sounds kind of mushed from her cheek being pressed against the telescope. ‘Boring Lady’s just typing. Like she always is. Except it’s two fifty-seven in the morning.’

‘This is so weird,’ I say. I love
weird stuff
. I wish there was more weird stuff in my life.

‘Go back to bed,’ Jessie says.

For twins, Jessie and Vee are pretty much opposites.

There’s no way Jessie’s going to wake up Alice. Not with Baby teething like he has been this week.

But Vee pushes away from the telescope. She drops down into Jessie’s bed, gives her a growling tickly squeeze and then does the
Return-Leap-Roll
. It’s a special jump we invented to get from the bottom bunk, up on the desk, across the top of the wardrobe and back onto the top bunk. It’s pretty much a
ninja
move.

I push my curls out of the way to check the telescope again, but Boring Lady has finally packed up and left. Her office light is off.

I wonder if we should stop calling her Boring Lady now that she’s done something kind of interesting.

I’m nearly asleep when I hear a knocking, bumping kind of sound on the other side of the wall.
This is also weird
. Mr Hinkenbushel, who lives in the apartment next door, is supposed to be away for work for the next month. 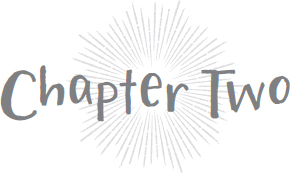 In the morning, I wake up to the smell of smoke and the sound of screams. I do a
Drop-to-Running
descent (always the quickest way out of my bunk) and am in the kitchen pretty much before I’m awake.

The
smoke
is from Dad burning crepes and the
screams
are from Baby, who is unusually angry this morning.

‘Here,’ Dad says and thrusts the flipper towards me. Then he picks up Baby from his rug. Baby stops crying.

I loosen the edge of the crepe and then flip it. I’m an
expert crepe-flipper
.

It’s not until later, when we’re sitting around the table having breakfast, that I remember the noises next door. I get the yucky feeling in my chest that I always get when I think about Mr Hinkenbushel.

Mr Hinkenbushel hates us and we kind of hate him right back. One rainy day when we were riding our scooters down the corridor, he called us ‘
idiot kids
’ and his face went all red and he spat by accident from the yelling. Another time he even shouted at Alice. We were so mad at him – that’s when we declared
vengeance
on him.

‘How do you know he’s back?’ Jessie asks.

Vee looks up from tipping about a litre of maple syrup on her crepe.

I tell everyone about the noises in the night, but I can tell they don’t really believe me.

‘He said he wouldn’t be back until next month,’ Alice says. As though that settles it.

‘We’ll have to re-start the HRC,’ I whisper to Vee, but Dad hears me and glares. ‘
Jokes!
’ I say, throwing my hands in the air.

HRC stands for
Hinkenbushel Revenge Club
. The club was my idea. It was the first really fun thing I did with Vee and Jessie after I moved in (apart from harbouring a runaway in our basement, which kind of happened at the same time). Jessie built the HRC website. We even made a revenge declaration video, which got twenty-five hits on YouTube. We started the club when Mr Hinkenbushel shouted at Alice, so she should have been grateful. But she wasn’t. Our first revenge act massively
backfired
and Alice and Dad were both pretty mad about it.

It’s probably lucky they never found out about the website.

And now Mr Hinkenbushel is back, which sucks. It’s so boring to have to be quiet every time you leave the house.

It’s Saturday. That means Alice is taking me and Vee to rock-climbing while Jessie does violin, and Dad and Baby clean the house.

Rock-climbing is my new favourite thing. Mum sent me climbing clothes from Geneva after I told her I was doing it: three-quarter-length
galaxy-print leggings
and a silver sports top. I like the top because it has a cross-back that makes my shoulders look strong.

I
scramble
my curls into a fat, high ponytail to keep them out of my eyes. When I’m done, I lean against the window, looking out at Boring Lady’s desk. I can tell there’s no-one there, even without the telescope. I wonder what she was doing last night. Maybe it wasn’t so strange after all. Maybe Boring Lady always types at 2.57 in the morning – it’s just that I’m not normally looking?

Jessie is lying on her bunk with the iPad, reading the news. That’s one of the weirdly grown-up things Jessie does.

‘Pyjamas,’ she says, as I’m about to leave them in a
puddle
on the floor. For ten years, I had my own bedroom when I lived with my mum. I used to leave my pyjamas wherever I wanted and Mum would just laugh at me. I could have moved to Geneva when Mum got her job there with the UN. Instead I moved in with Dad and Baby and our bonus family. Mostly a good choice – until Jessie starts telling me what to do.

I lean over Jessie to shove my pyjamas under my doona. She taps the iPad and a lazy, posh, English-sounding man says,
‘It’s absurd to suggest these diamond smugglers are operating in Melbourne. All one has to do is look at a map!’

A Hollywood Bride (Billionaires' Brides of Convenience Book 2) by Nadia Lee
All the Bright Places by Jennifer Niven
Class Four: Those Who Survive by Duncan P. Bradshaw
When Elves Attack by Tim Dorsey
Game of Thrones A-Z by Martin Howden
Love in the Years of Lunacy by Mandy Sayer
A Question for Harry by Angeline Fortin
Dirty Boy by Kathryn Kelly
Galaxy in Flames by Ben Counter
Blue Skies, Season 2, Episode 8 (Rising Storm) by Dee Davis